It was time to move our half-grown chicks out of the brooder house and into the field pen for a while. You could tell by the smell (usually there isn’t one!) that it was either time to double the wood shaving bedding layer or move them out. And since it has been sooooo beautiful around here, the natural solution was out! 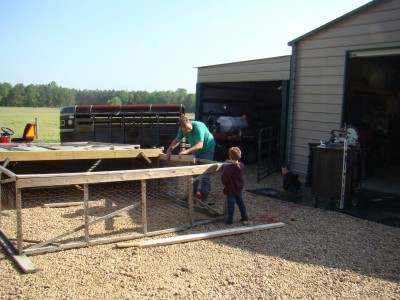 Our field pen needed a little maintenance after the last two years of use.

So off to the field pen they went on Saturday afternoon. 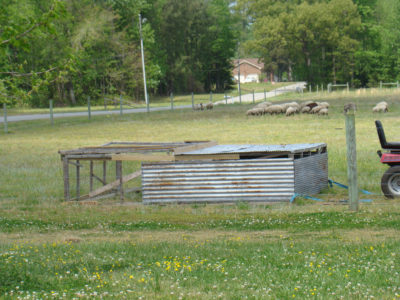 Then Mr. Fix-It pulled it out into the big field with the sheep. They were very curious.

And naturally the temperature dropped that night and it started raining….

Just kidding (obviously!), but it really did rain for 24 hours straight. It started Saturday night about 10:30 and drizzled steady all through the day on Sunday until a little past dark last night and the temps dropped down in the 50s (and maybe even the 40s)

I was worried about them, but they were bright and chipper this morning at breakfast time. 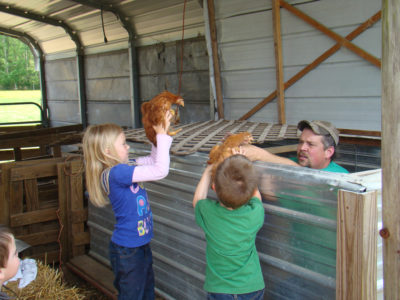 Then Mr. Fix-it climbed in the brooder house and starting handing out chickens for transport.

We also had one ewe left from that group of late-bloomers (also known as the “heap of trouble” group)–who naturally decided that Saturday night was the perfect time to drop her first lamb. Nothing like coming into the world with a little thunder and lightning! 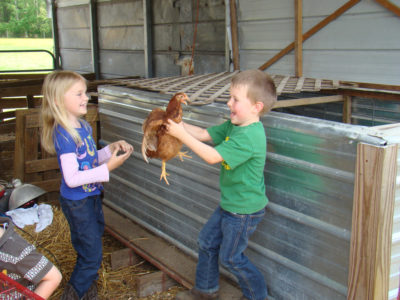 It was definitely the funnest part--for everyone except Mr. Fix-It. It was kinda smelly in there!

The little one seems pretty sturdy and we watched him close all day on Sunday (and went out and dried him off a few times). But she was trying hard to be a good mom, so we let them be. (I didn’t get any pictures yet, because it was raining so much I didn’t want to take my camera out!) I just wish she would have stayed under shelter more. The sheep don’t go “in” from the rain unless it’s really storming. It just drizzled steady all day, so most of them stayed out on the pasture, grazing and looking soggy and miserable.

Now the cows, on the other hand, head for the barn as soon as you can smell rain coming. 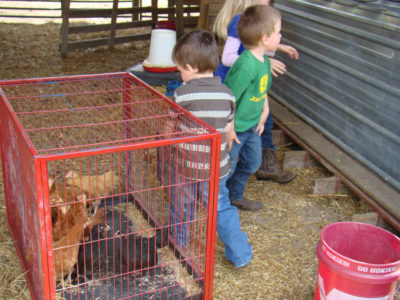 Speedracer's job is traditionally to work the gate. He was a superstar!

We try really, really hard not to interfere any more than we think is necessary with our animals. We work under the assumption that God equipped the sheep with everything she needs to know to be a sheep, and the cow to know how to be a cow and all we’re doing is trying to provide an environment for them to do what God made them to do. It’s when we start thinking we know a better way than God’s way that things start getting messed up fast–industrial hog houses, battery cages, feedlots…

That’s sort of a sweeping generalization. I’m not trying to make absolute statements here. We call the vet when our animals are sick. We feed bagged grain to supplement in the winter. It’s just that the closer we come to a natural, sustainable system approach, the fewer health issues we see and the better vitality in each generation. 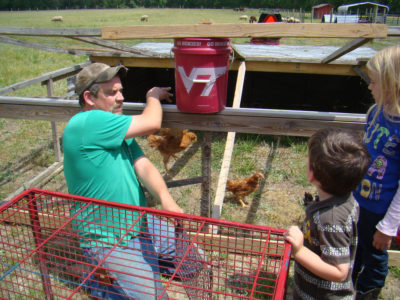 Then they were moved into their new grassy home.

Although you do spend a lot more time wet, on rainy weekends.