Last week I came home from work one evening to a sick lamb wobbling around the pasture. She was suffering from a heavy internal parasite load–our dreaded nemesis around here, the liver fluke. I guess I should have anticipated it with the wet summer we’ve had, but we’ve had an easy year so far. So we rounded everyone up and ran everyone through the chutes, checking eyes and gums (pink is healthy, pale pink or white is anemic–which is a sign of worms) and giving everyone a dose of de-wormer.

The good news–that lamb was the worst, by far. Two others were also showing early signs, but everyone else seemed fine–other than annoyed that we were rounded them all up during their favorite grazing time! 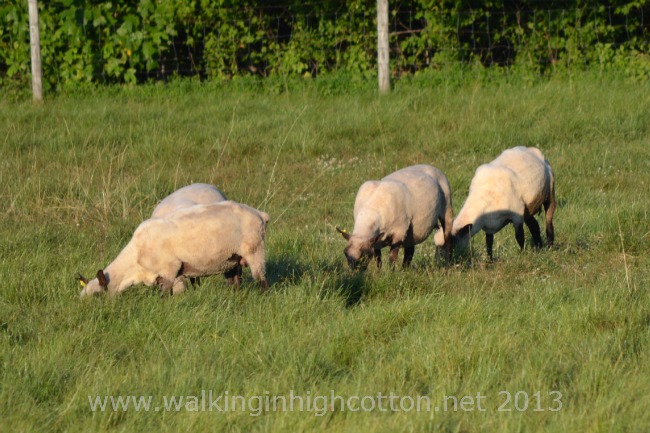 Evening is the preferred grazing time–after the heat starts to fade and the flies disappear. Mosquitoes don’t seem to bother the sheep much. {smile}

However, we did find an older ewe that is apparently having some dental issues. She had a sharp triangular protrusion from the side of her cheek. So naturally I had to pry her jaws open and check it out.

Sheep breath in your face isn’t appealing on a day-to-day basis as it is. Add dental hygiene issues to the mix and, well, I about fainted.

I also loosened my grip on her lower jaw…

And then jerking back when I screamed! 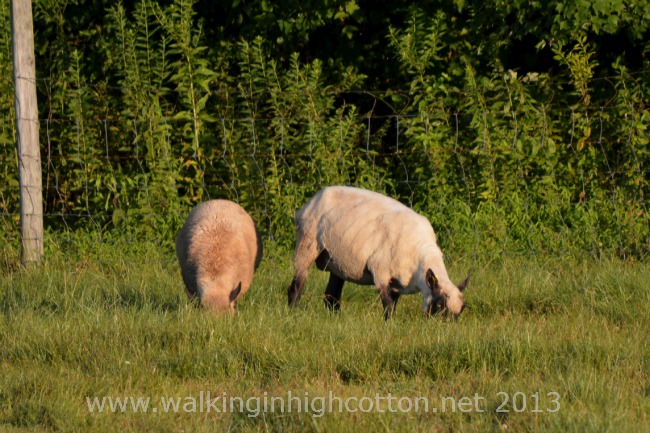 Look how much that lamb has grown! (On the left if you weren’t sure!) You really see it when he’s next to his momma like that!

The kids all gathered around while I groaned and squeezed my hand between my knees and  hissed “cuss-word-cuss-word-cuss-word!” under my breath. (Because that’s what reformed cuss-word users say when they’re still in their being-reformed days.)

The Ladybug asked what happened and I said, “She bit me!”

Her eyes got big as saucers and she looked at me in shock and said “They bite?!”

Oh, the accusation in those big blue eyes as she absorbed the facts. “You tell everyone sheep don’t bite!!”

“Well, they don’t bite-bite. She bit me because my finger was in her mouth.”

Here’s a little Parenting 101 for any of my readers that aren’t already past this mistake–DON’T discuss foundational philosophies like truth and dishonesty with your children while in excruciating pain from a freak accident that happened right in front of them. Because here’s what happens…you lie. You don’t mean it, it just comes out. And you don’t even have the self-control to make it plausible. And it lives on, forever.

Speedracer wanders up and asks, “Did it hurt Momma?”

“Not really.” I gasped between grit teeth. “Sheep don’t have sharp teeth.”

“Then why are you crying.”

“I’m not crying, I’m sweating.” (Well, I guess that was half true. It was 95 degrees and I was sweating from the effort of saying “cuss-word, cuss-word” instead of actual cuss words.)

“She’s crying. It hurt a lot. She got bit by a sheep.” This from the Cowboy, while chasing grasshoppers 300 feet away.

“Sorry Momma, would you like an ice pack for your hurt finger?”

“You shouldn’t lie Momma. You should tell the truth.” This from Speedracer–who has heard this a hundred-bazillion times lately! “God doesn’t like when you lie. It’s a sin.”

“My finger is fine!”

“No, he means about the sheep.” The Ladybug interrupts. “Sheep do bite people.”

“No, he was talking about my finger.”

“No, he meant the sheep. But you shouldn’t lie about your finger either.”

Then I had to face the reality that I still had to open her mouth and actually look around in there. 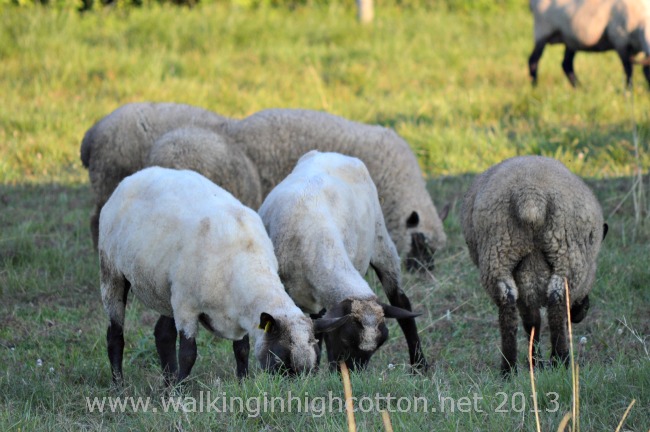 She had a wad of half-digested, black and green gunk stuck in her teeth on one side. I scraped a bunch of it out and gave her a shot of antibiotics in case there’s a wound in there I couldn’t find–not being an ovine dental expert or anything, I technically have no idea what the inside of a sheep mouth should look like. We’re waiting to see if the swelling goes down because it was a one-time issue from something she ate (maybe a thistle or something got stuck in there?), or if this is going to be a call-the-vet problem.

Mr. Fix-It got home with 4 sheep left in the chute, and thinking we had it well in hand, headed off to an emergency call. {sigh} He’s not one for “creating drama” from everyday life anyway, so since my finger was still attached everything was fine. {smile}

The Ladybug informed me that if anyone asks her, she’s going to have to tell them that sheep do bite–because that’s the truth.

The two lambs showing early signs seem fine. So fine, in fact, that I had a hard time checking on them over the weekend because I couldn’t tell who it was! The really sick one is still really sick, but hanging on. Every day is one more day the medicine has a chance to work, so we’re praying, giving vitamins, feeding her individually, and letting her lay on the cool garage floor by the big fan if she wants to (how shocked was I to walk in and find that she’s weaseled her way into the garage by the back door?) She clearly has a natural susceptibility the rest of the flock doesn’t seem to have–which isn’t good for her long-term anyway, but we’re doing everything we can.

How was you’re weekend?