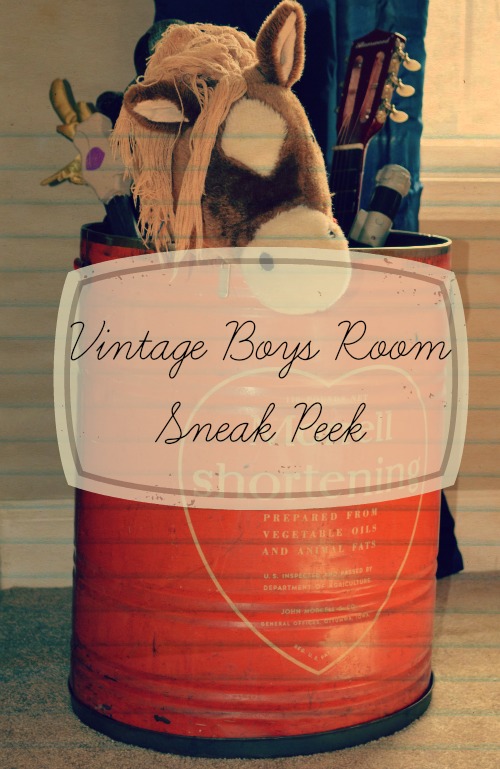 We’ve been making steady process on redecorating the boys’ room for two weeks now–something I’ve wanted to tackle for about 2 years now! {smile} As we wrap up I should have final pictures next week, but I’ve got a few early pictures here that I just can’t wait to share.

The Cowboy and Speedracer really love it too. I’m glad I decided to use draper rings though–because they just can’t help but open and shut the curtains about a thousand times a day.

If you’ve ever been in our house you know that we love old, vintage, antique, farmhouse, rusty, peeling-paint, scratched wood, and water-spotted stuff. {smile} We decided that, instead of going with a “theme,” the boys’ room would just be an extension of the character of the rest of the house. Not just one thing, but a little bit of all kinds of vintage, nostalgic “boy-ness.” So there’s antique tractors, cowboys, a handmade gun rack, vintage pie crates, and old feed sacks all together.

If you haven’t been around long, the room used to look like this… 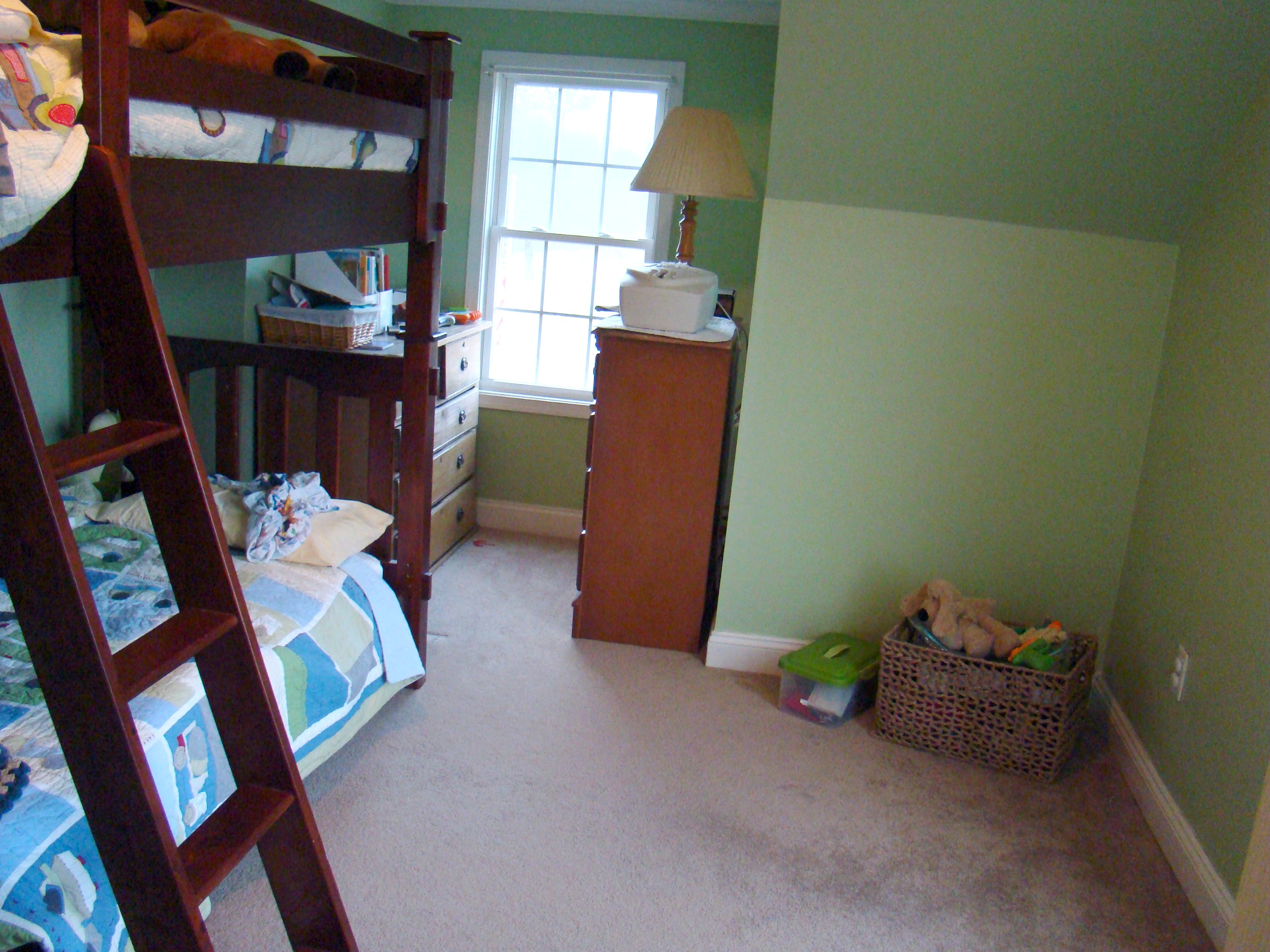 Light green paint, no curtains (the boys actually pulled the curtains down by accident when they were little and we never put more up), bunk beds against the one big wall, and two dressers. 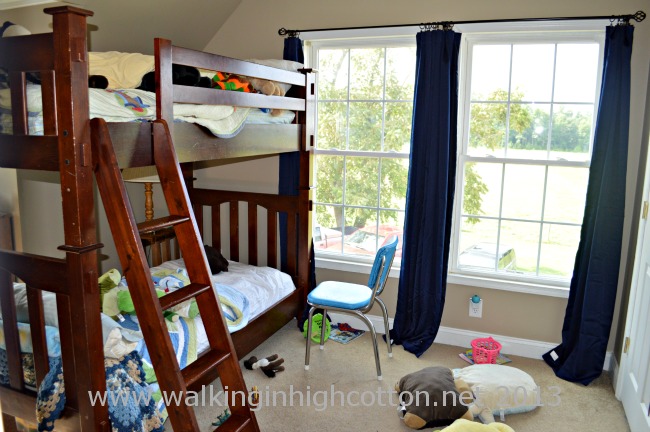 Excuse our mess, we’re in the middle of making beds.

We painted the walls Stone Lion from Sherwin Williams (remember my obsession with the Chip It tool a few weeks ago?). It’s a grey-brown that looks more brown in the daylight and gray in the evening light.

We turned the beds so that they are on the wall where the basket was in the first picture and we put up new navy blue drapes. The boys wanted “red, white, and blue” so we went with neutral walls, the existing white trim, and red and blue accents. 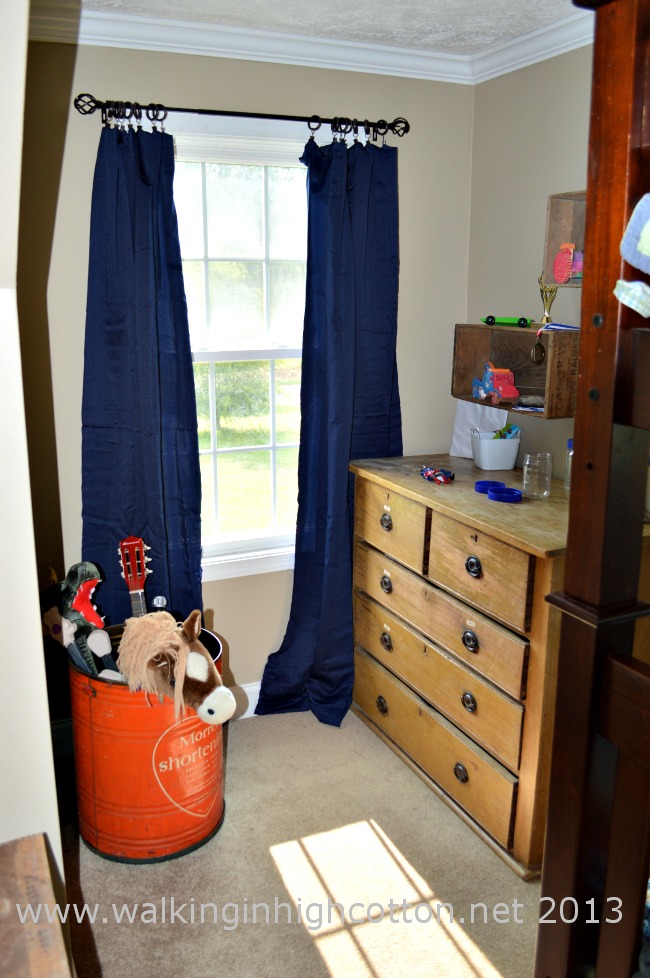 We consolidated into one dresser a while ago and left that against the wall in the dormer. One dresser is plenty right now for them to fit their simplified wardrobes in!  I’ve promised to paint their dresser too, but they have to decide if they want it to be navy blue or dark barn red. They’re still debating, but I do want to have it done before school starts, if possible. (Time is flying!) 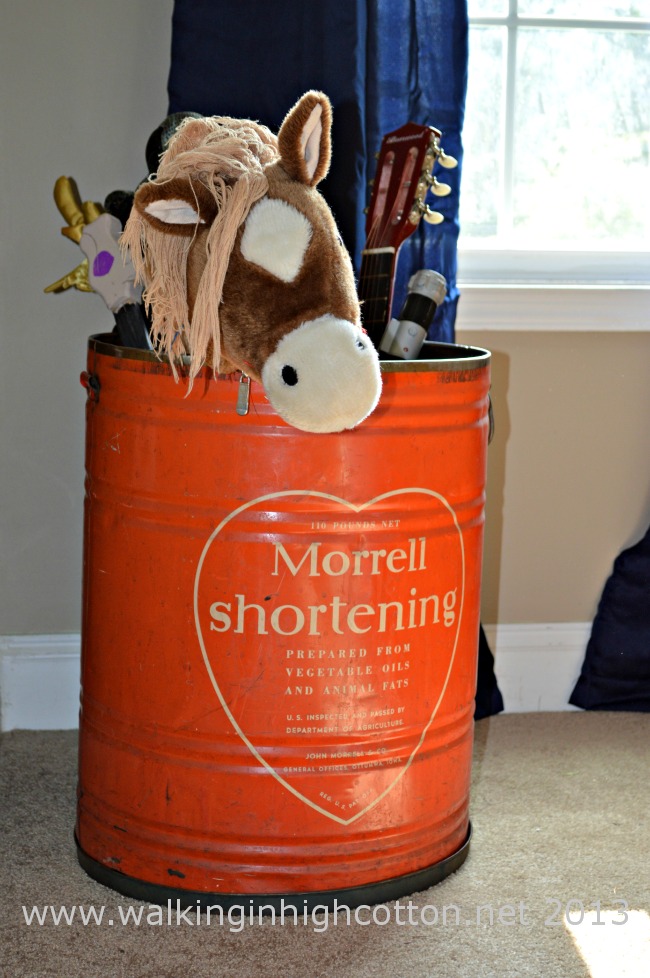 We scored this awesome old tin for toys for $27! It’s in great condition and goes perfect as a pop of color with their vintage decor. 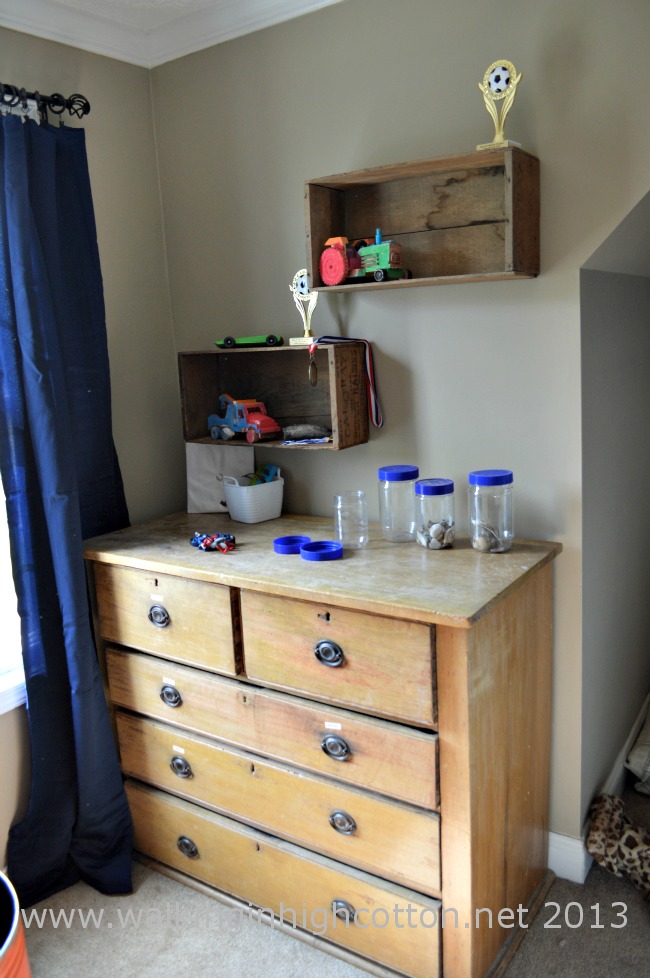 We hung some boxes over their dresser that are quickly filling up with their “treasures” that are not supposed to be played with. The peanut butter collection jars are allowed to be handled and will stay within reach. The boxes are old raisin crates from Winchester, Virginia that we found a flea market–how cool is that?

We’re “treasure hunters” so we’ll probably be adding bits and pieces to the walls for several months as we come across things we like–and can afford! {smile} I’ve got my eye out for something like this, or this, or this…to go in the blank spaces over the dresser. 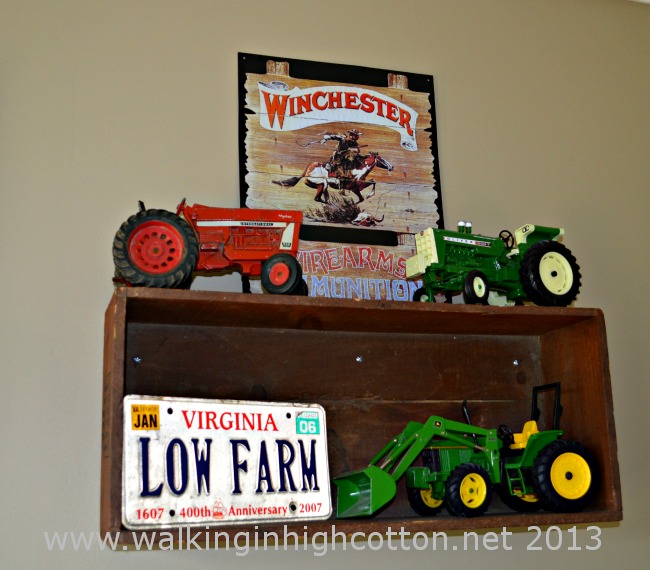 We moved this box from the kitchen to their bedroom for more out-of-reach display space–it’s a dynamite box and has “high explosives” and “danger” printed on all four sides. Very fun! {smile} The tractors are Mr. Fix-It’s and have been languishing on a high shelf in the playroom for several years. The license plate is actually one of our original farm tags when we first moved back to Virginia and built the house–it’s been stuck on a shelf in the garage for years now since we traded in that truck on the Hemi.

If you follow Walking In High Cotton on Facebook at all, you probably saw that we scrounged some bea-u-ti-ful vintage feed sacks last weekend–two of which are now framed and hanging on the boys walls as well. I’ll be sharing those, as well as our pie company crate with its new casters, and some new closet organization next week as we wrap up the whole project. 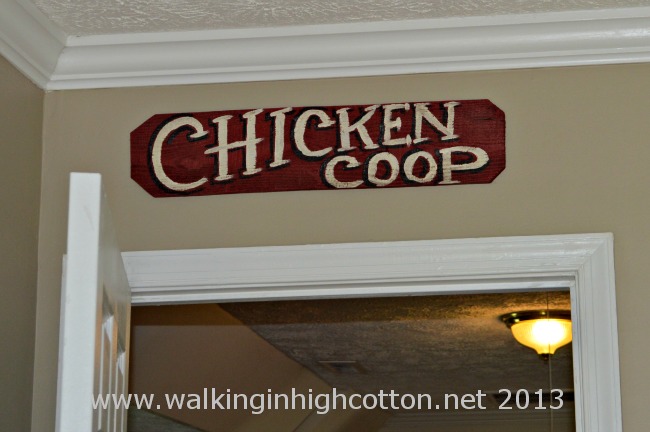 In the meantime, we’ve also been purging and simplifying like crazy over here. The kiddos have pitched or donated about 1/2 their toy collection. Literally half. I’m very proud of them. I’ve cut my closet back to half (maybe even more than half!) the items that were in it–and we’re tackling the game cabinet this week! On to the craft stuff soon!

It turns out we all like home better with more space and more time and less stuff!

As the Cowboy told me the other day…”Look momma, with those toys out of here, I have room to do flips!”  Hmm…

Any big projects going on in your neck of the woods?