I was home from church on Sunday morning because Speedracer was under the weather. So I happened to be home when we had an unexpected knock on the door.

It was a bicyclist stopping to tell us that “one of your cows is out of the fence by the road.” 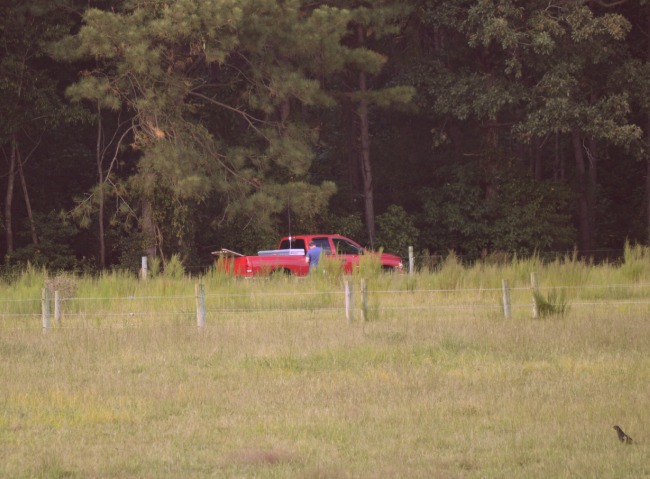 Mr. Fix-It and the Cowboy were out checking and tightening fence this weekend.

Mr. Fix-It and I were just talking about tightening up the fence and doing a little maintenance before we move the sheep for the Fall. The cows are much more sensitive to the electric fence than the sheep since they don’t have all that wool to insulate them. The “hot” in our hot lines has been more like luke-warm lately and that won’t work for sheep. Apparently we waited about 4 days too long! 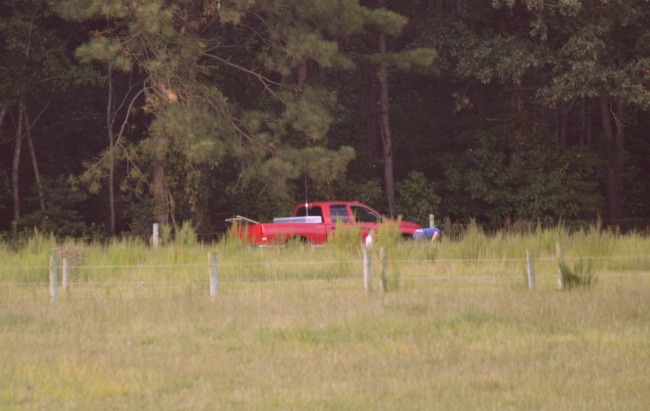 The Cowboy is always game for farm work. Speedracer was sleeping.

So I threw on my boots and headed out there. Sure enough, Molly’s 2 yr old “calf” was out. He’s yet another feisty red bull-calf and he’s been trying to throw his weight around lately. (You may remember him from the head-in-water-bucket incident!) Right on our road frontage.

Plus, as I walked up to him waving and stomping and yip-yiping–he didn’t move. At all. He just turned around and stared at me. 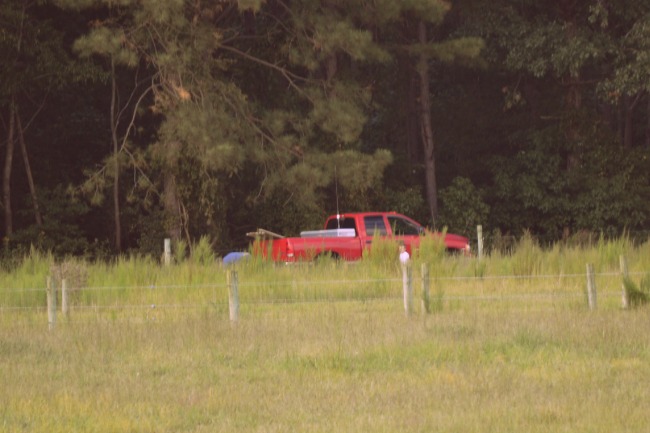 They tightened up the high-tensile and checked all the lines and posts.

Our Zebu are about half the size of a standard beef cow, so not being full-grown he’s probably only 1/3 the size of a regular black Angus bull. But still, if he wants to be angry, he’s no joke. Our cows have never given us a moments real trouble, but if we’re going to have an incident, this is exactly the kind of situation that’s going to cause it–young, rambunctious bull, separated from the rest of the herd, next to a busy road…

After a few minutes of cold stare-down, I headed back to the house to get reinforcements. I had intentionally left Penny at the house because I didn’t want her to accidentally chase him into the road, but this job was a bit bigger than my nerves at the moment. So it was either the dog or the truck and the last time I took a truck down that path there was an unfortunate incident with a mailbox…

As I was heading back to the house, Red Bull turned around and headed the opposite way, down the frontage and around the far corner.

That was good news!

He started galloping all the way around the perimeter of the big field, kicking up his feet and bawling… 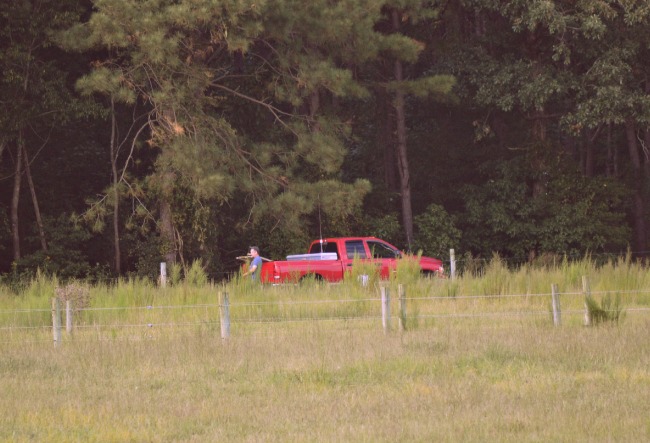 They found a section on the far side that had broken completely loose and had to be put back together–thankfully with high-tensile, that’s not as bad as it sounds.

The bad news…with all the cows in the field all the gates are closed. (So no one gets out. In theory.) So there was no where for him to get back in.

And once you go all the way around, guess what? You’re right back to the road!

{Our property is sort of like a funky, flattened out “U” shape, with the road cutting straight across the top to close the loop. There’s a drainage ditch and a tree line to form the curve and then fences dividing up all the open space in the middle. The off-set between the ditch and the fencelines creates a path encircling the whole she-bang. So image a “U” that is outlined, not solid. One of these days I’ll have to post a sketch…}

Penny and I raced back to the house, through the backyard, and over to the far side of the farm, swinging the big yard gate out to close the path. Just in the nick of time! He literally met us at that gate. That’s the only place where the gate is wide enough to meet the ditch line and close off the path. (And technically, it’s a ditch, not a moat. But I don’t think any of the animals so far have realized that.) For a second I thought he was considering crashing through the ditch around the end, but Penny changed his mind and chased him back down the fenceline. 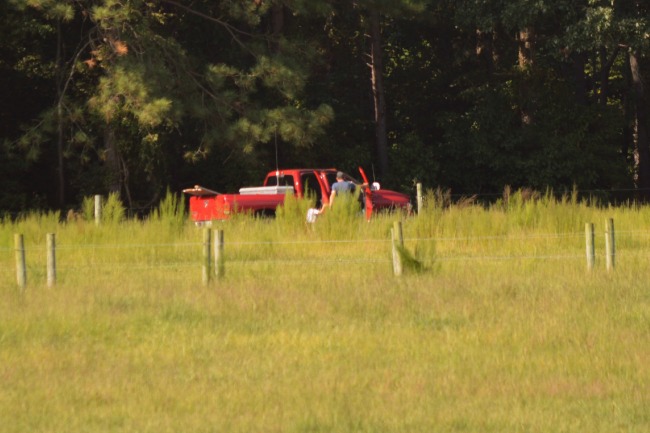 Now our fence is firmed up again–and HOT! {smile}

Then I raced through the yard and cut diagonally through the back field (full of freaking out sheep!) to try to get the middle alley gate open for him. He was way faster that I was and would have charged right past if Penny hadn’t gotten there first. She turned him back the other way while I got the gate open–then I turned around and ran back to the yard gate before she scared him past that ditch.

Thankfully she was on the inside of the fence and he was on the outside, so when I called her, she cut back across the yard with me and came out in front of him at the gate to sent him back the other way. On his way back around, he kindly slipped through the now-open gate and charged straight up the alley–where the top gate was already shut. So I huffed and puffed back through the sheep field to get that gate closed again before he turned around and charged back out.

Mr. Fix-It, the Ladybug, and the Cowboy got home from church and all was serene. Speedracer had even fallen asleep on the couch waiting for me to come back in.

Mr. Fix-It checked our fenceline, fixed a broken connection, and hustled Red Bull back to the herd. And that was that. All in a day’s work! Or something like that! {smile} I wouldn’t have considered missing church to be a blessing–but what if he had been wandering loose for the next hour until we got home?

What was your weekend like? Have any big plans for this week?