I’m not sure what it is about our kiddos, but they seem to be a magnet for hard-luck cases. Remember the Ladybug’s little bird adventure over the summer? And then there’s the case of the crazy, snuggling chicken (who is still living hale and hearty in the backyard). Well, now the Cowboy (who’s been inside most of the weekend struggling on and off with stomach issues) comes out of the house for ONE MINUTE Saturday evening to check on me working sheep alone–apparently the’re not sure I can handle anything without them (and they’re probably right!)–and finds a barn swallow fledgling floating in the water trough. Ugh! 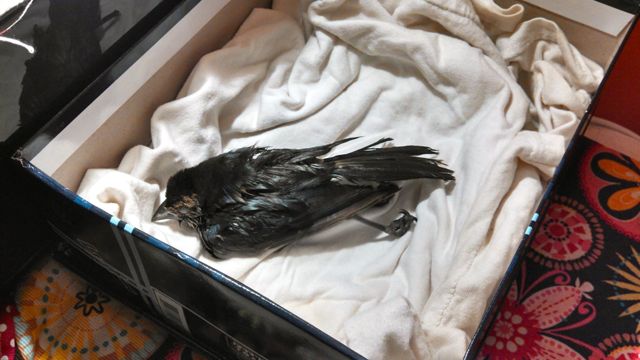 He was seriously, seriously hopeless looking.

But he was still breathing.

Gasping, really, and not closing his mouth between breaths. And he had that straight-legged, doomed look to him.

But he was still breathing.

So I did what any parent would do–we got a shoebox and took him in the house. Remember my conversation with Mr. Fix-It about the Ladybug bringing animals in the house? Insert his “I told you so” here. {smile} I called Mr. Fix-It (he and the Ladybug were off helping a neighbor) and he just sort of shrugged (you know that tone of voice when someone shrugs over the phone?) and said ok. He knew when I mentioned the straight, stiff legs that it wasn’t good. 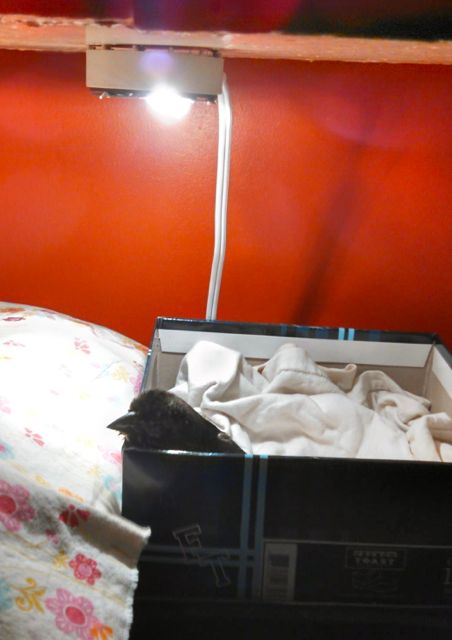 We stuck him under the lamp on the computer desk, which is the warmest place in our house without actually plugging in a heater or heat lamp (I wasn’t going that far for a doomed barn swallow!) and just waited to see if warming up and drying off would be enough. It was touch and go for about an hour, then he started stretching his wings out and flopping around the box a little bit. It was either the end getting closer, or him getting better.

Turns out it was him getting better. Eventually he stumbled his way out of the box and sat our on printer for about an hour with his eyes (and his beak!) closed. I’m glad we keep our printer covered! {smile}

Eventually he was dried off and wobbling around on the printer under the heat. When he started leaving his eyes open, I knew he was definitely on the road to recovery. 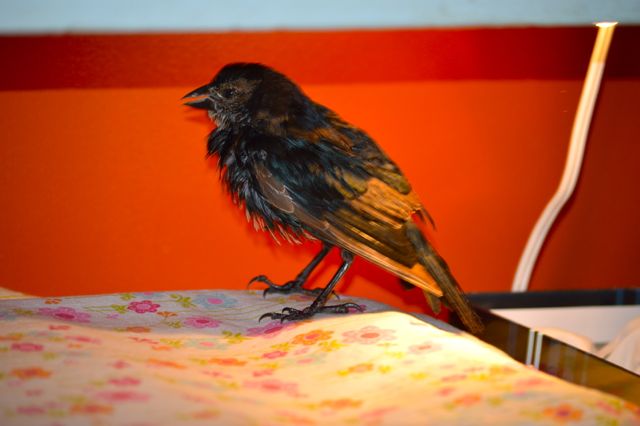 When he tried to actually take off from the printer, I knew he would be fine. 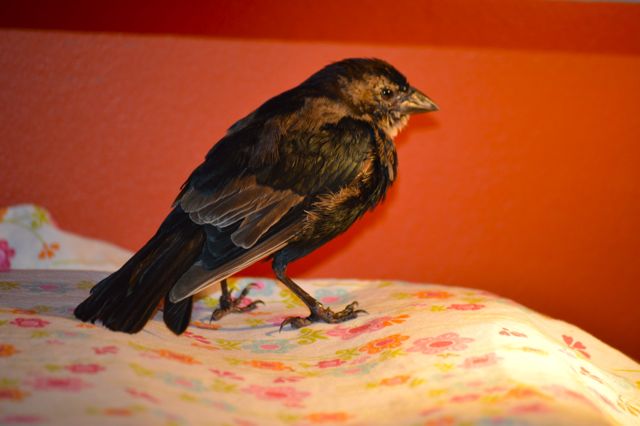 I started to let him go outside, but it was dark by then. Most birds nest at night because they don’t see well. We know the barn swallows do, because if you go in the feed shed at night and turn the light on, they all start cheeping and swooping around in a panic. And then we have that night-stalker who can see good at night roosting right off the porch these days! So I brought him back inside and put the lid on the box for the evening.

Mr. Fix-It came home and went right over to take the lid off and check on him…

And he flew right out and started swooping around the room. 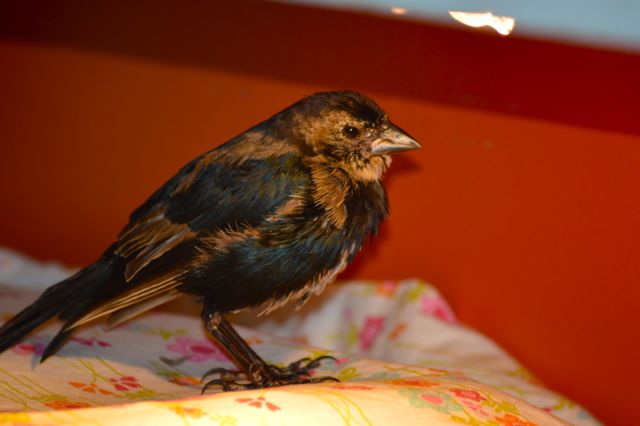 So we caught him again and closed him up for the night. In the morning the Cowboy and I took him out to the back porch and took the lid off and he flew right out to the back plum tree as if nothing had happened.

Did you have any big adventures this weekend? 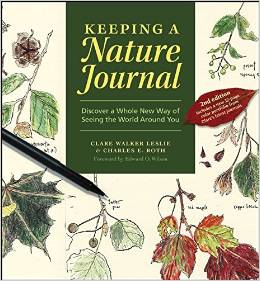 I’m constantly amazed by how many tiny encounters we go through day-by-day with God’s great creation. Be sure to stop by my post from last week about the owl and check out some of the free resources and nature study printables I shared. There’s two or three great bird study journals that you could print out to share with the kiddos (or for yourself!). I also stash a lot of resources on my Pinterest Nature Study board.

We also LOVE the book Keeping a Nature Journal by Clare Walker Leslie. It’s got great tips for any age–student or teachers. This book is why I started having them note the weather when they journal and the Cowboy loves the drawing tutorials.