It’s been a rough couple weeks since Christmas break ended. Speedracer has been battling dual ear infections, which means he can’t sleep, which means we can’t sleep…and we’ve just had a string of maintenance issues around here.

Friday morning I started my Lee-Jackson-King 4-day weekend by waiting on the side of the road with Mr. Fix-It (who doesn’t get a 4-day weekend–or even have today off!). There was a prescribed burn at the tree farm on Thursday so Mr. Fix-It was back over there picking up the roadside caution signs and slipped the GMC into the ditch (which in these pictures you can’t even really see, so you see the problem). 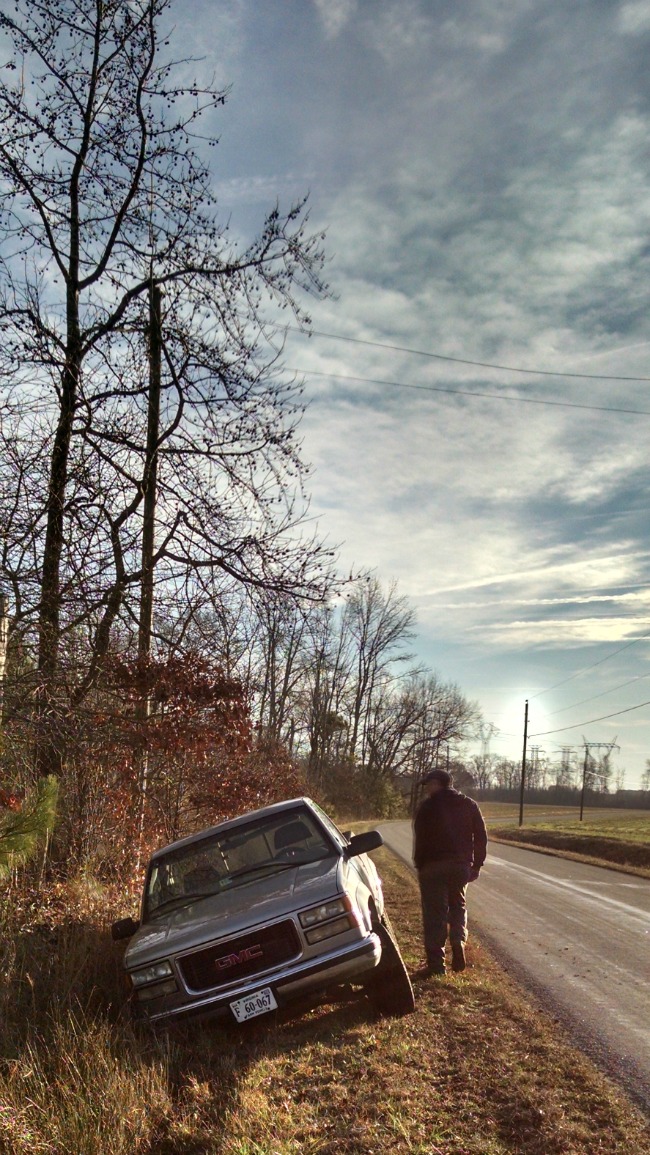 And it was waaaay in there. With the Dodge still in the garage after last weekend, it was a sticky situation–especially on a weekday morning! 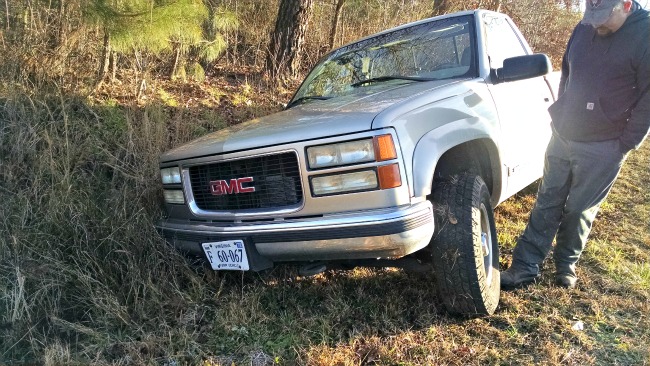 But we got it out with no damage–just a lot of mud to wash off.

Our oven hasn’t worked properly since before Christmas. We had a repair guy out to look at it and it took until after the New Year to got a quote on parts. He estimated the repair at 2/3 the cost of a new stove and suggested we look around. We couldn’t find one in the price range he quoted, so we were a little undecided of what to do. Well, the wiring started burning on Friday night, so that decided things. We found one, but it won’t be here until Friday. {sigh}

Saturday morning everyone got up early and got to work. Mr. Fix-It was in the garage with Speedracer working on the Dodge and the Cowboy and I were outside working sheep. 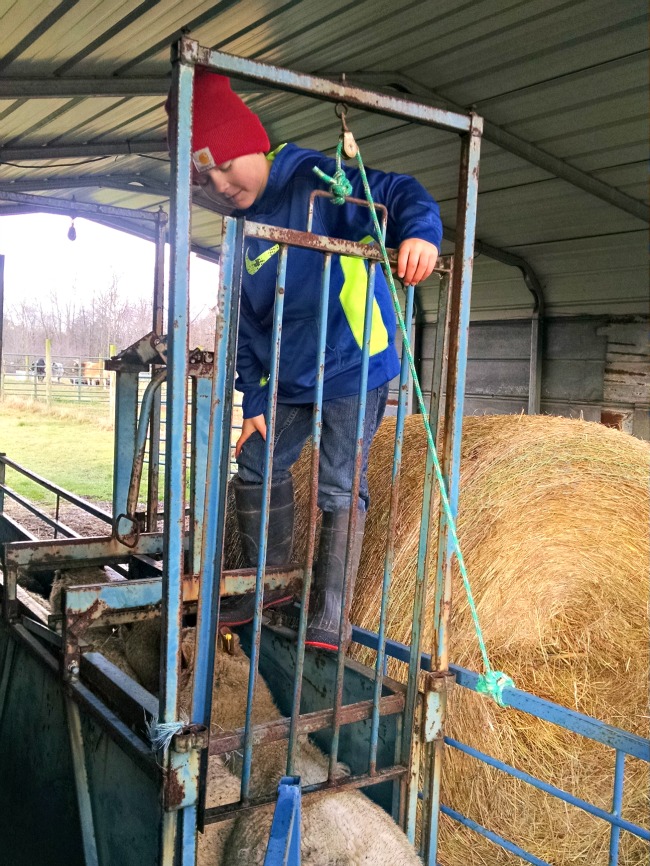 Nothing in the barn was set up properly for working sheep. We were checking everyone over because we’ve had some ewes losing weight and wanted to worm, if needed, before lambing as well as give vaccines. Most of our ewes are getting older, so they need a little extra TLC as they go through the later stages of pregnancy. We’ve downsized our flock by about half, and all the lambs are sold so there weren’t many animals to do. 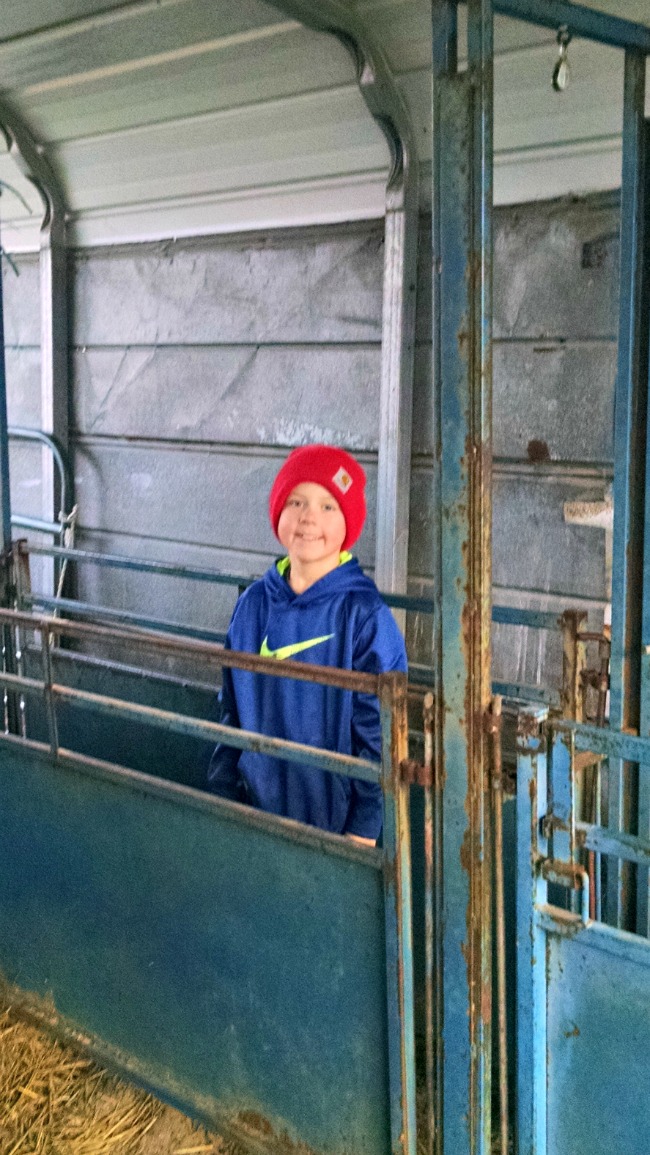 But as I mentioned, this was a little unexpected and the barns weren’t really set up for it, so we spent a lot of time climbing over stuff that was in the way and it was just a wet, bruising hour-long exercise. The good news for everyone is that these ewes are pretty experienced and not flighty so we didn’t have much fuss or stress–other than my shins from climbing over all the panels and fences.

I mentioned last week that the Dodge blew up while hauling hay. On Saturday, Mr. Fix-It got it running again (yea!!), but the 4-wheel-drive still needs some work. These repairs were step one, investigating the transfer case issues will be step two.  Then, ugh! Sunday it starts snowing! 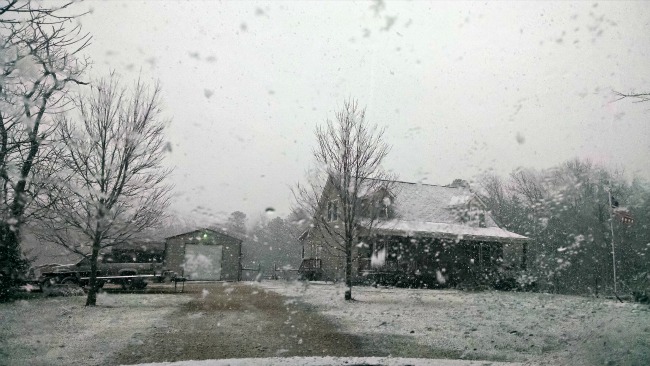 But at least we have it back on the road, since the GMC needs rear brakes and the Mazda needs a rear bearing replaced. (Mr. Fix-It is spending all his free time in the garage lately. Thank goodness he’s so handy!) And we rarely need 4-wheel drive for snow around here–usually more for mud.

How was your weekend? We’ve had a pretty mild winter, so I’m really not complaining about the snow. It makes everything look clean and pretty for a day or two. Have you had a hard winter, or an easy one?