Our dogs live in the house with us. That means they both have to be reasonably clean and neat and not smell like they rolled in dead animal or cow patties on a regular basis. It’s been known to present it’s own set of challenges. {smile}

Both the four-feets were pretty wiffy after a walk the other day, and I traced it back to some very stiff, suspiciously smelly sections of their neck and chest. If you’ve ever seen a dog roll intentionally in a pile of mess, you know they usually lead with their shoulder, just under their collar (and proceed to get it all over their collar while they’re down there!), so this fit the cow-patty-rolling profile pretty good. Coal got his bath first. Mainly because we have a detachable shower head (like this one), and he’ll calmly walk into the shower with me and stand there while I wash him, rinse him, wash him again, and rinse him again. I didn’t train him to do this, specifically, he just doesn’t mind water and does what he’s told. With me. No one else baths him. Period. {smile} He doesn’t really tolerate being “messed with.” He’s willing to accept certain forms of affection from the whole family, but only puts up with pestering, aggravating, squeezing, cleaning, clipping, or rough play from me. And occasionally Mr. Fix-It. This is what we fondly refer to as the Cattle Dog Stink Eye. {smile}

But the Ladybug really, really wanted to do some washing too. So she got Penny. 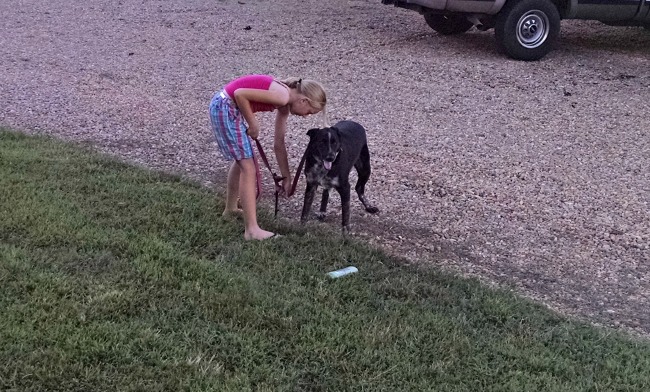 Who bathes outside. Because she does NOT walk calmly into the shower and stand there until it’s over. 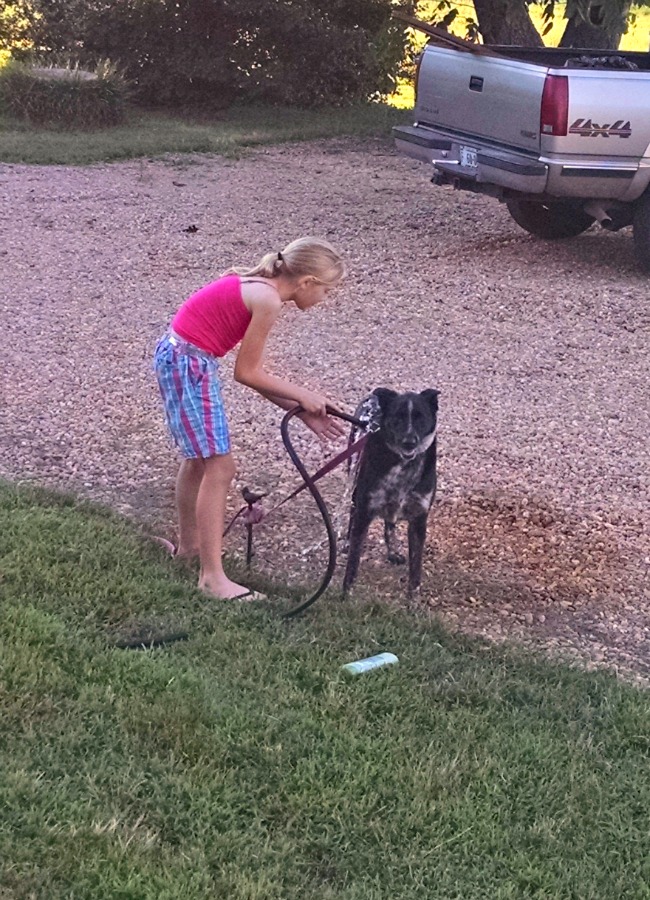 We have to leash her, and tie her to a stake. Otherwise she’ll just quietly slip away the minute your hands are off her or your back it turned. So quietly it’s actually kinda scary. You reach for the soap, and suddenly she GONE. {smile} Once she’s tied down though, she kinda gives up and stays put and behaves. Bless her heart. She doesn’t fuss or carry on once you get started. 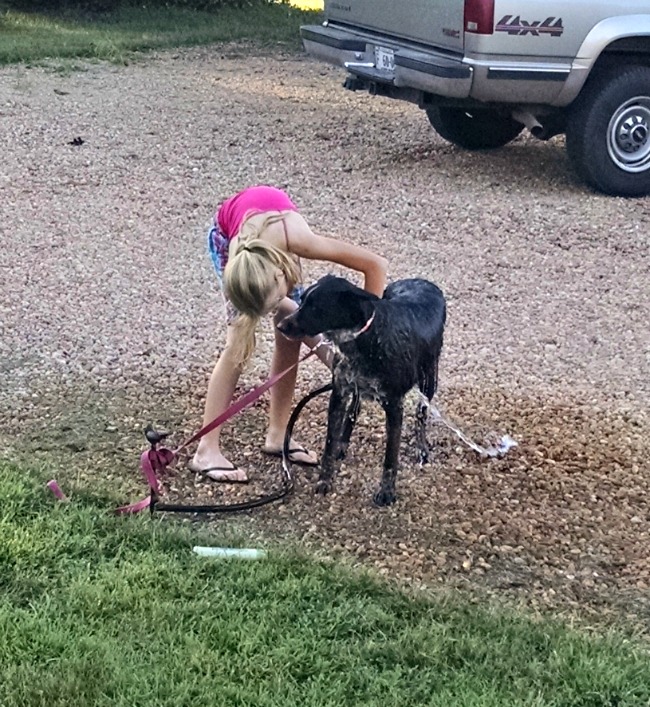 She’s actually quite patient about the whole thing once she knows your committed to it. So the Ladybug practices all her grooming skills on Penny. Outside. 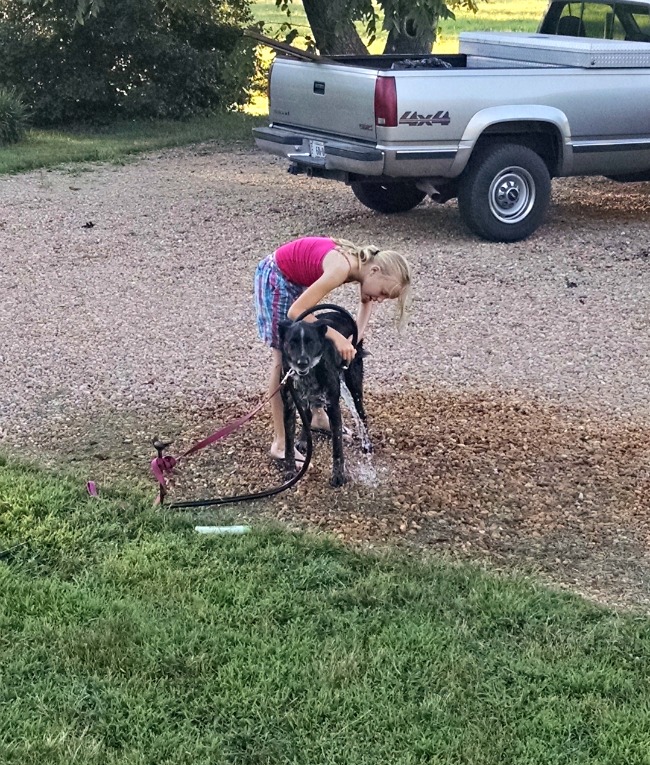 It tends to be a rather long and drawn out process to make sure all the shampoo gets out. 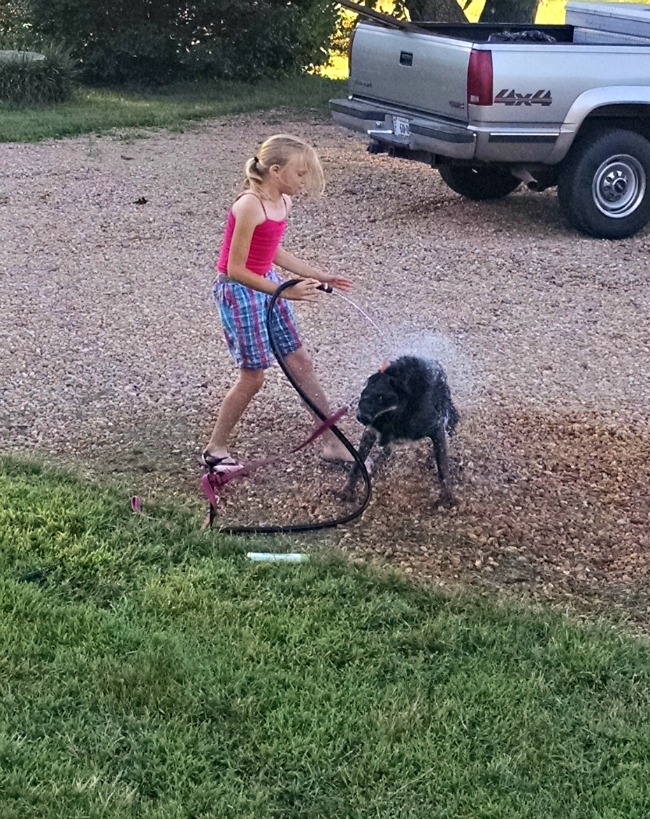 And they both usually end up soaked by the end of it.

Then Penny pays us all back by shedding ferociously all over the house for the next week. 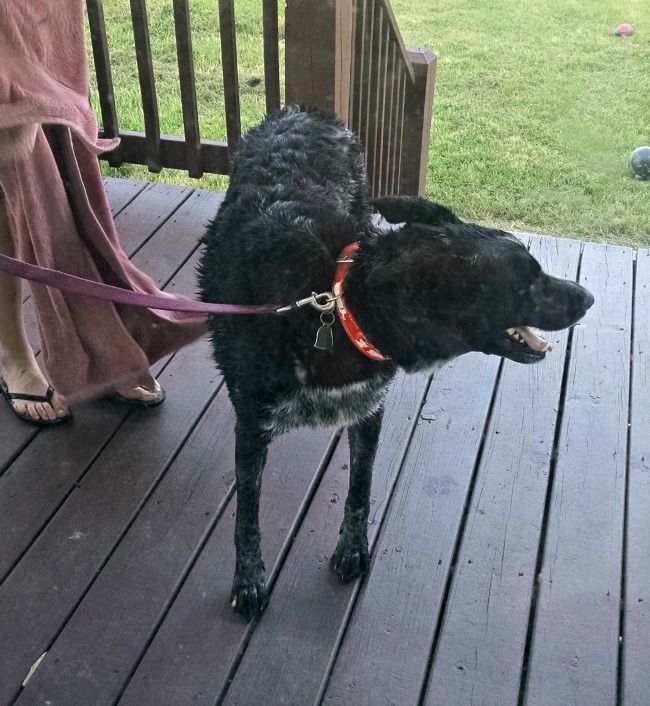 She has such a good attitude about being the family pet!

Do you or your kiddos bathe the pets? Cats are a whole different class of chaos when it comes to bathing and I’m glad I haven’t had to worry about that in a while!

By the way, we found this Earthbath shampoo that we really like. We have soft water, so rinsing out the soap suds can become an all day thing with some shampoos. And if you don’t get it all out, you get itching and flakes (pets AND people!) We’ve been lucky with this one, it’s oatmeal (which I love for their skin!) and it’s soap-free so even if she doesn’t get every bit of it out, we haven’t had any serious skin issues. Win-win! I also use plain old stainless-steel nail clippers, but I’d be interested to hear any suggestions on some of the newer styles out there. I’d like to find something easier for the Ladybug to start practicing with, and the stainless ones can be slippery if your not familiar–or nervous. These Safari ones look like they have a pretty good grip on them.

Hope you’re having a good week! We’re off on another year of back-to-school week, so first day pictures coming up soon!