You might remember the twisted pile of mess Coal was always climbing on last Fall that was our mobile shade shelter for the animals. It had blown apart again and it was time for a real overhaul. So it sat around all winter as a pile of farm junk in the back of the field while we didn’t need it. Since we’ve had our first week of over 80 degree days, now we do, so we hauled it out of the field and got started on the rebuild last weekend.

Building a Mobile Shade Shelter (Part One) The Structure

This post has a lot of pictures for you because they can explain much better than I can how we did it! 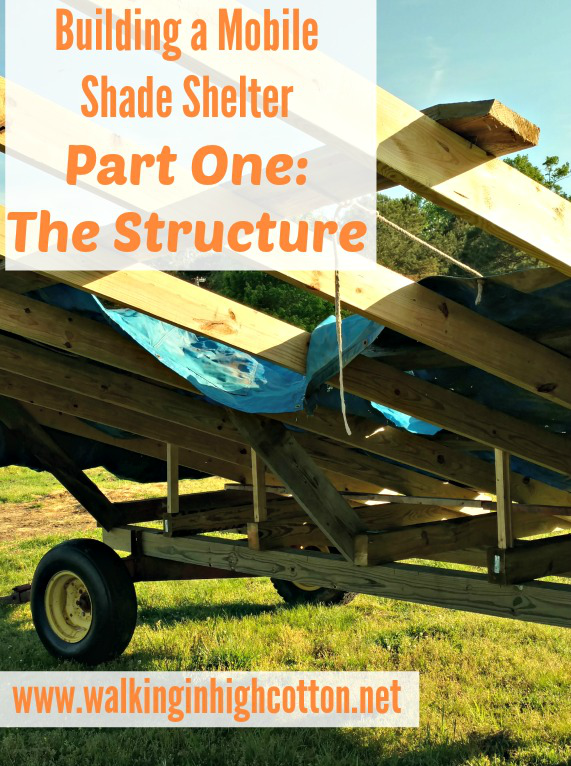 You can also see from the picture below that the thing always falls apart in two main pieces as well. The roof just blows off the structure, but usually stays in one solid piece. Since we get hurricanes, tropical storms, and nor’easters pretty regularly here it’s not so crazy that it comes apart once a year or so. Previously we had just gone out there and slapped the two pieces back together. But the base structure has always been old, reused, wood, and it’s just time to put some fresh beams in. 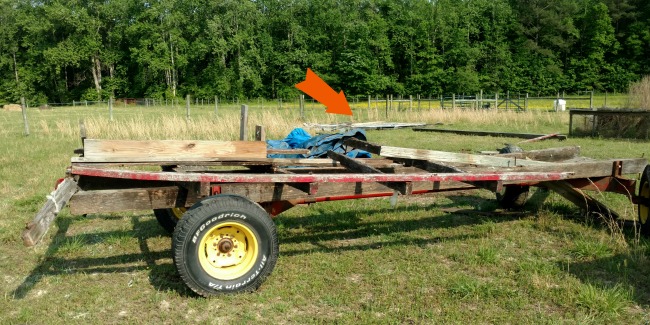 The first thing we had to do was haul the old wagon running gear we use as the base back to the house so we could work on it. 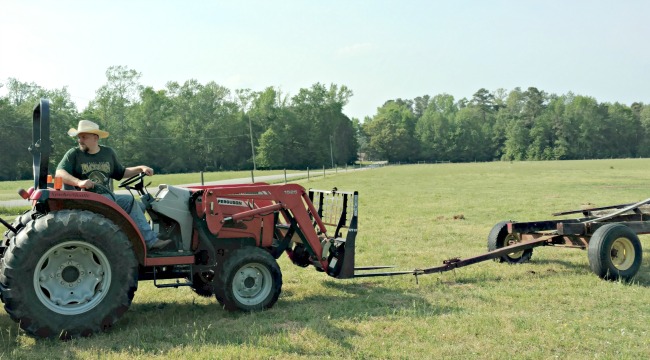 Then Mr. Fix-It started to tear the old one down. We piled all the boards because we still planned to reuse what we could. And I’ve got some DIY house projects for some of the boards that were too far gone for outside work!

We put in new 6x6s as the running gear base. I can’t even imagine how old the originals were. They looked like old barn boards from who knows where. We’ve been using them for 10 years and they were worn out when we got them! 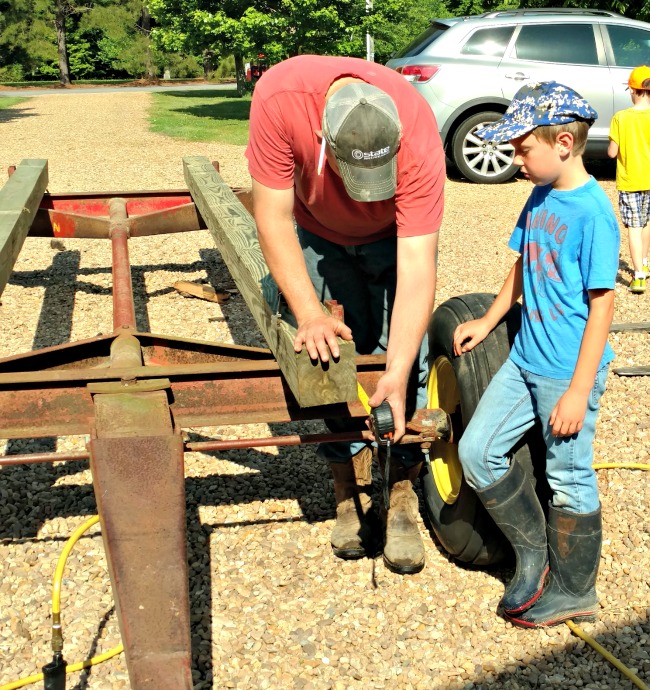 Then we cut more 6x6s into base cross-beams and bolted them onto the frame. 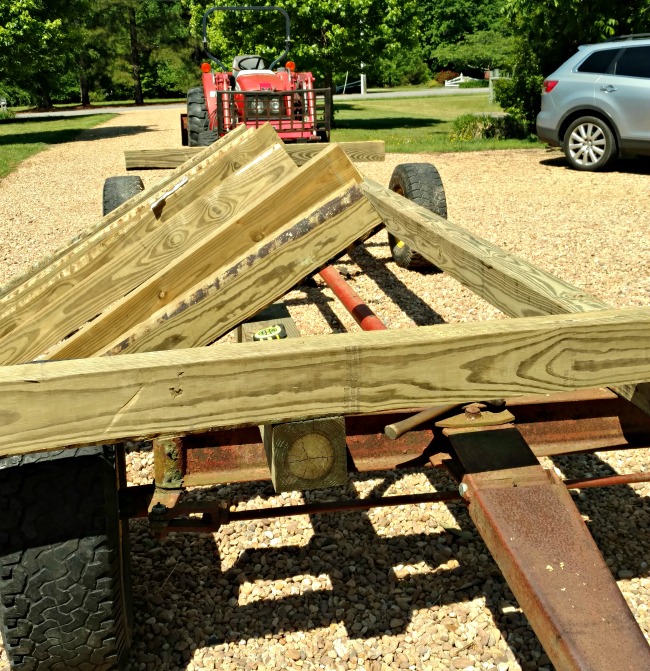 Drilling for those bolts was hard on some of our old tools! We have an assortment of hand-me-down farm tools in the garage that we used if they’ll get the job done. But Mr. Fix-It uses Milwaukee tools on his more intense and professional-level jobs and he had to pull them out for drilling through these beams when it started to burn up the motor in our smaller, home drill. He used this Super Hawg joist drill for the bolts.

Well, that and some good, old-fashion elbow grease! 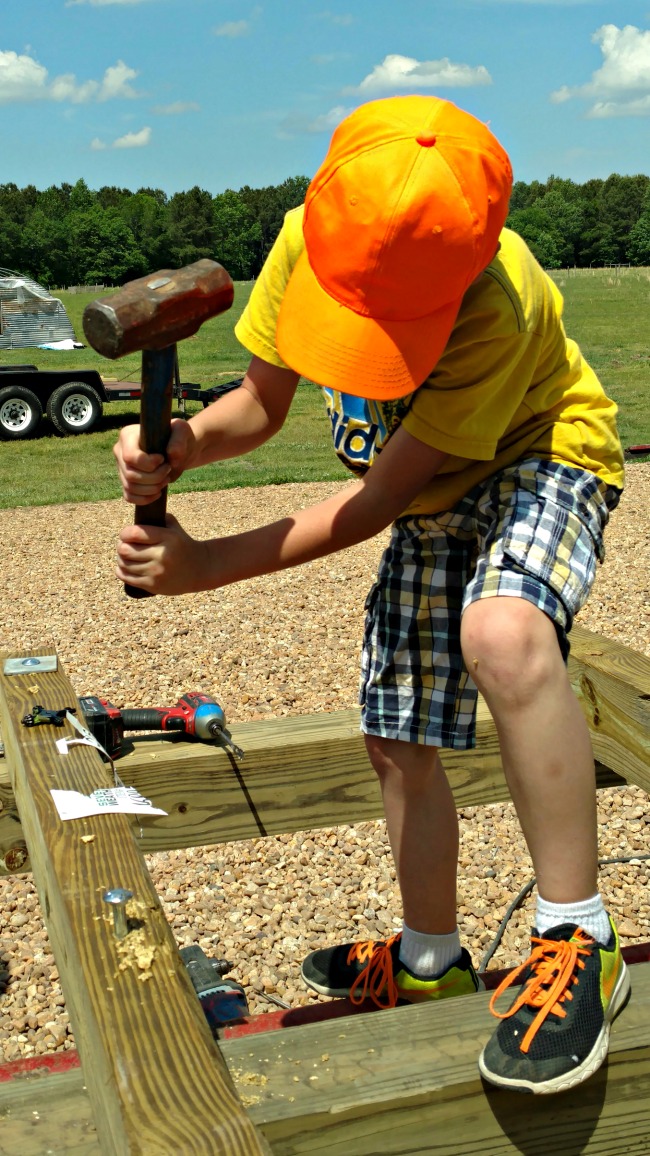 There was a job to be found for all hands out there! 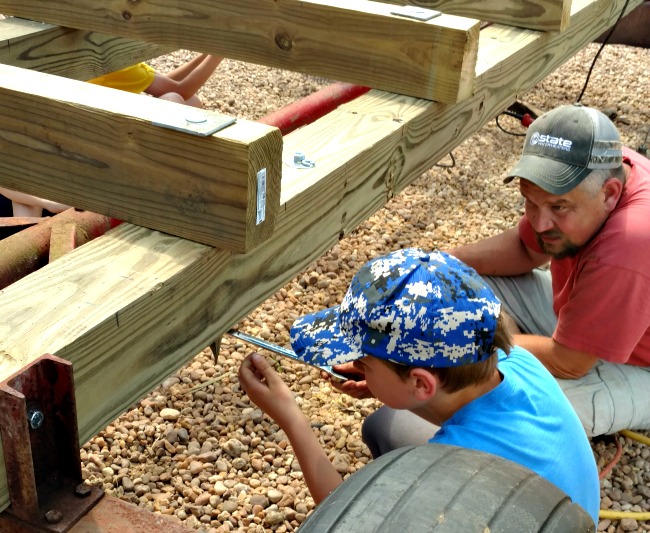 All the cross bars got bolted, eventually. 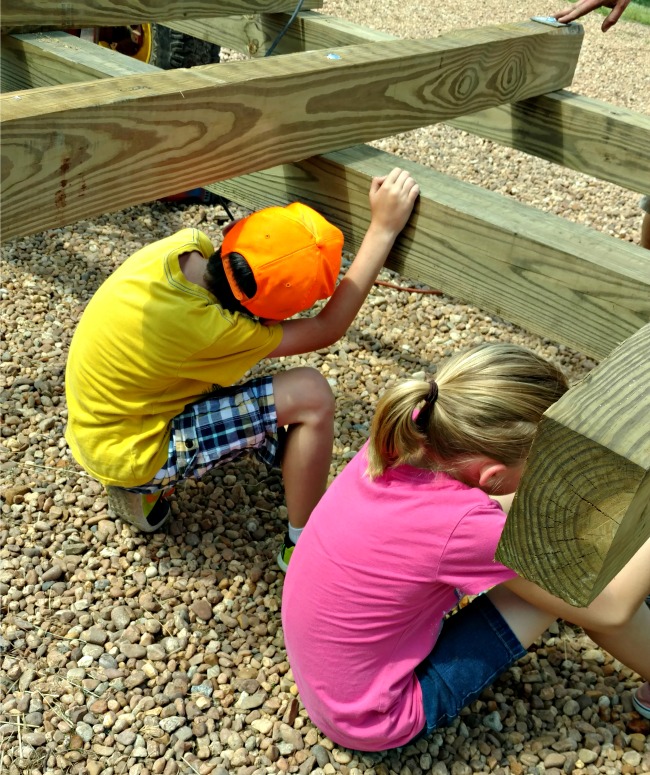 You can see that the cross-beams stick out passed the running-gear base. This gives you something to connect the perpendicular rafter supports too. Then it was time to put up the rafters. No pictures there because it took all hands. The rafter boards are 2x6x16. We put the first one up by hand while eyeballing the angle and height. Then we set the 2×4 underneath the rafters to support the rest of them and set the angle. 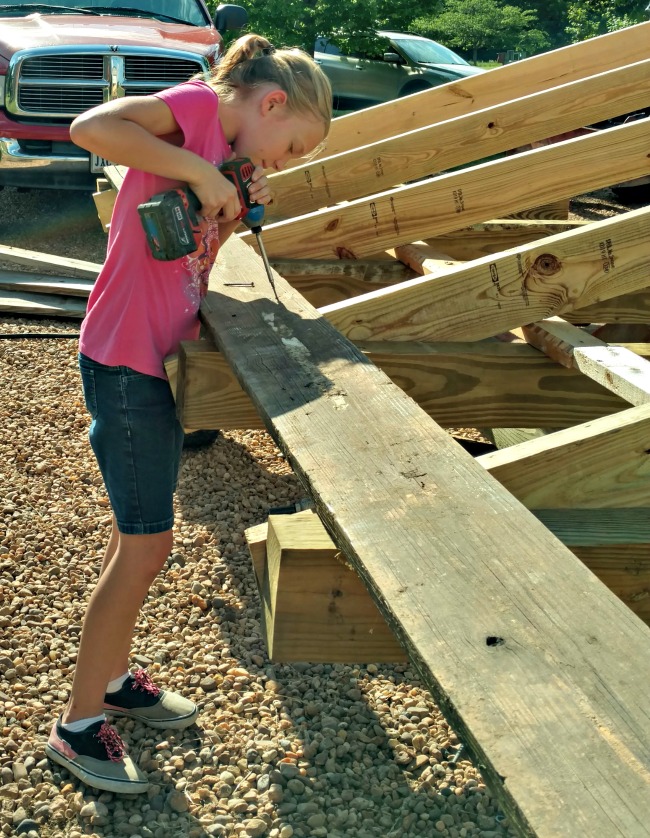 If you look close, you’ll see that we pieced the 2×4 support with scraps we had here at the farm. The only new wood we bought was the 6x6s for the base and the 2x6s for the rafters. Everything else is reused so it’s odd pieces from this or that. The original structure used 20′ rafters–we don’t even remember where we got pieces of wood that long! This one is a bit smaller, but more sturdy. 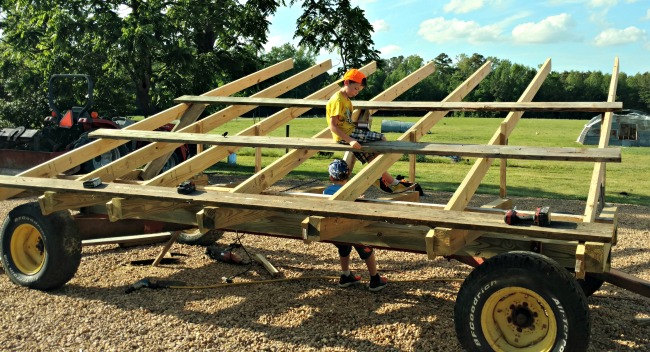 Then we used some of the better boards from the original structure to provide roof purlins and perpendicular rafter supports.

As you’ve probably noticed through all the pictures, there were always plenty of jobs to keep the kiddos busy! 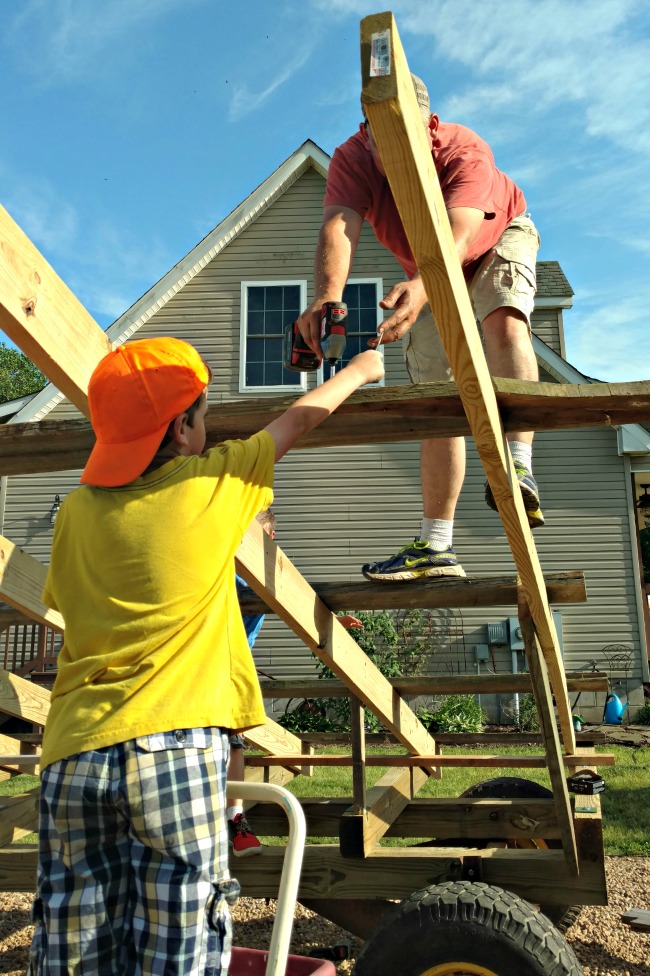 We ended the weekend by adding some more perpendicular suports and hauling it back out to the field for the week. I’ll spare you the drama of getting it stuck in a tree in the driveway {sigh}. 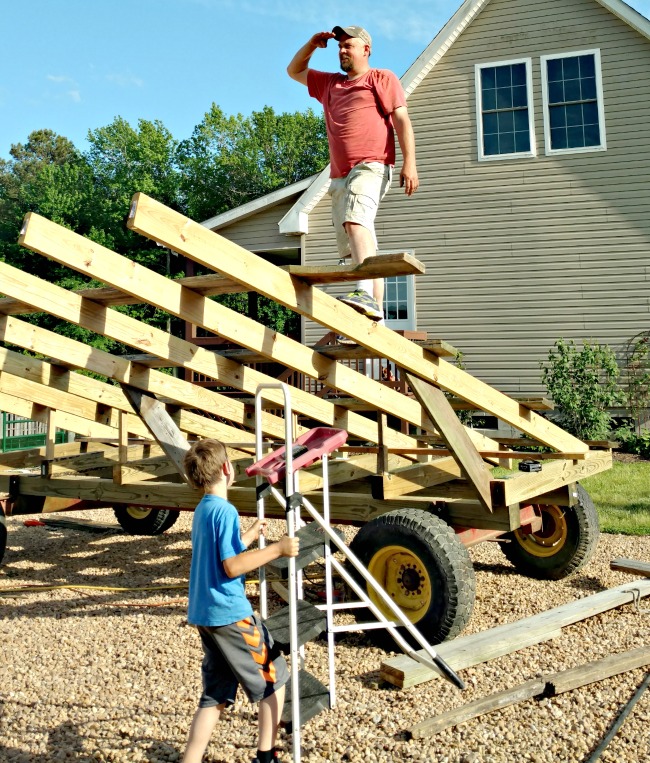 It is a bit smaller than the original and the rafters are angled higher, so it fits through all our gates this time! We threw an old cotton tarp over it to provide shade for the week until we can get the roof put back on. The roof is still basically in one piece in the back of the field and just needs to be flipped over on top. 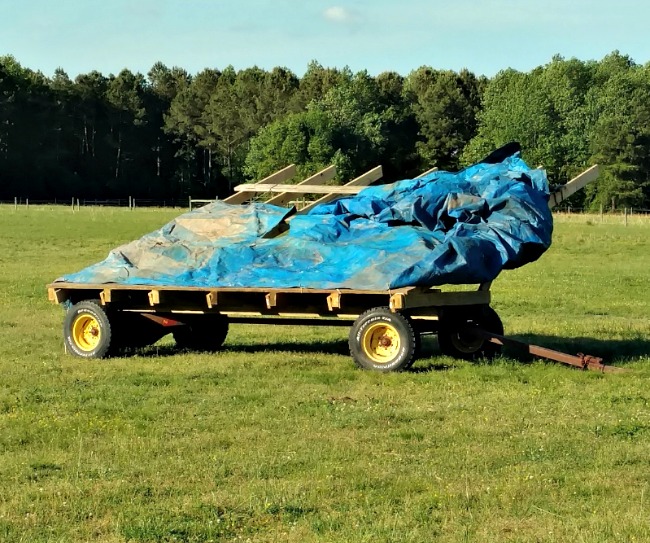 The animals also still have their winter huts in the field for rainy days. They are not as mobile as the shade shelter and are harder on the pasture. When the tin roof goes on the shade shelter, it will provide rain cover as well as shade and the huts will be moved out of the pasture completely until next winter. 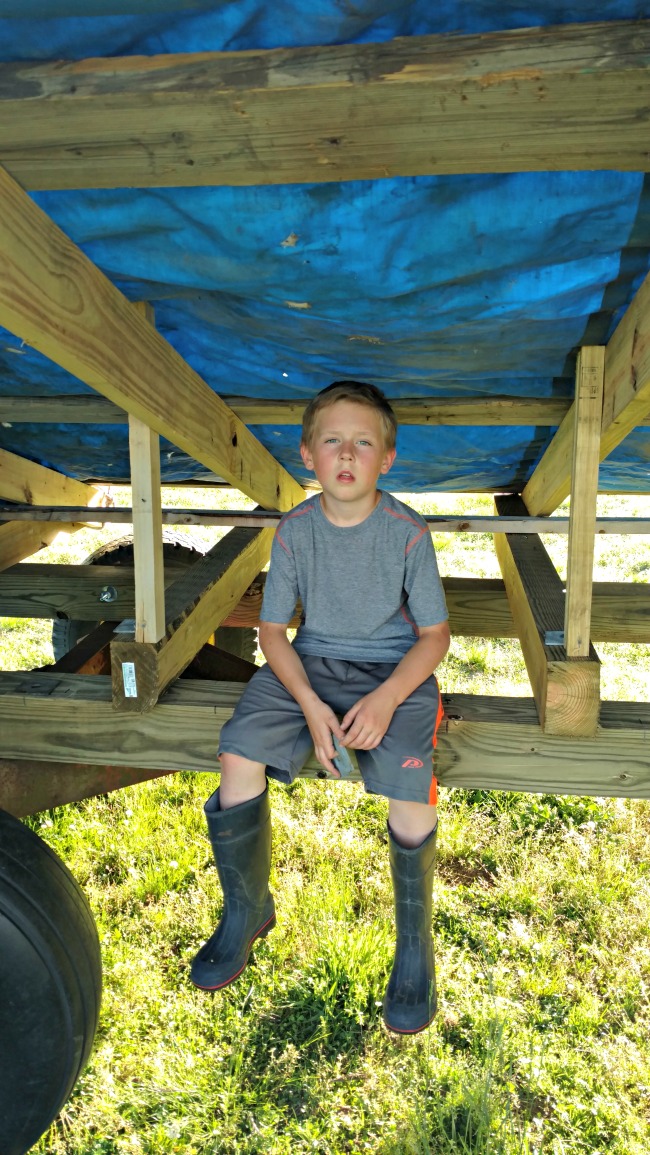 We also put air in all the tires again. The shade shelter is heavy, but you can move it by hand if you have some help and the tires aren’t flat. With some heave-ho, the crew and I can move it around the field a little at a time. We basically move it over one-two whole lengths each day. As I’ve mentioned before, our cows don’t mind the heat and don’t use it much on sunny days. But the sheep will all be under there during the hottest part of the afternoons. The sheep will actually be all the way under the running gear and wheels. And then the cows will get under there in summer thunderstorms.

I’ll be sure to post about the roof next week when I have pictures of putting it on. It’s just a wooden frame covered in salvaged tin. But until then, you can see some decent pictures of it in an old post about rebuilding the shade shelter after a storm a few years ago.

Building a Mobile Shade Shelter (Part One) The Structure

What’s new around your farmyard or home place?