In the spring I mentioned that we would have two family unit studies this summer. One is our Astronomy unit study–which is continuing casually through the whole summer and has been very fun so far! (I’ll have an update on one of our projects soon.) The other topic I chose this year is Pirates. I had no idea they would overlap so much, but space pirates is totally a thing so it’s worked out great!

The history of Pirates is an interesting topic because it can involve a lot of hazy ethical issues, which we normally stay away from with the kiddos. Pirates are bad guys. They steal and break the law and sink ships and even kill people. And it’s popular to glorify them now–which is not normally my perspective when teaching. But as history buffs, we also know that Southern blockade runners in the Civil War were considered pirates by the Union–and we don’t see them the same way as, say, Blackbeard. There’s also a great debate between the definition of “pirate” vs a “privateer.” As one article put it, “one person’s freedom fighter is another person’s terrorist.” It can be murky waters (hahaha…)

So I was excited to see that Pure Flix has some Pirate resources available that I wouldn’t have to spend so much time previewing carefully first.

Pure Flix goal is to provide a “mix of family-friendly & wholesome entertainment includes movies for all ages, kid’s animated titles, documentaries, how-to’s, hobbies, educational, health & fitness, sports, outdoors and travel plus many inspirational and devotional titles” and I know I can trust their content to be clear of excessive profanity or violence, and portray wholesome family relationships. The kiddos will enjoy watching The Adventures of Mickey Matson, Buccaneers: Blackbeard, and Famous Explorers on their tablets without me hovering over them to keep an eye on things so much.

{Start Your Free Trial at PureFlix.}

And be sure to login to your Swagbucks account when you sign up–the subscription is worth 700 Swagbucks–and that’s a $5 Amazon gift card (almost a $10 one!) right there!

The other interesting thing I found when putting these resources together was that I, personally, tend to see pirates as mostly fictional. We tend to think of Captain Hook and Peter Pan and Jake and the Neverland Pirates as cute, clip art, characters. Even Blackbeard seemed more legend to me than a real man. But he was a real man, the lifestyle was a real lifestyle, and bringing in that actual history element became so important to me as I gathered materials. My interest doubled when I dived into the history and found out so much of it was local to us!

So this is definitely a topic of interest, but also discernment in how you share it. Here are the resources I dug up and will be using… 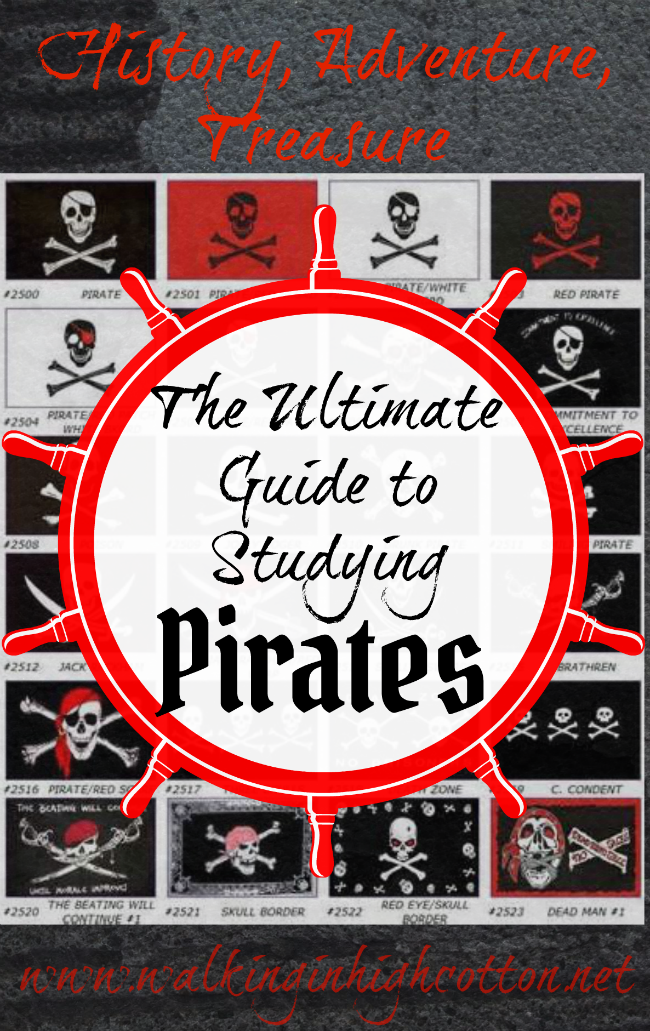 Topics You Could Dive Into

It turns out Pirates as a topic or theme can be pretty wide-ranging. So you could skim the surface (which is mostly what we’re doing since it’s completely new to us!) or dive in at any point. We’ll be diving in a little extra on the topic of Blackbeard because he was a local guy. Some ideas: 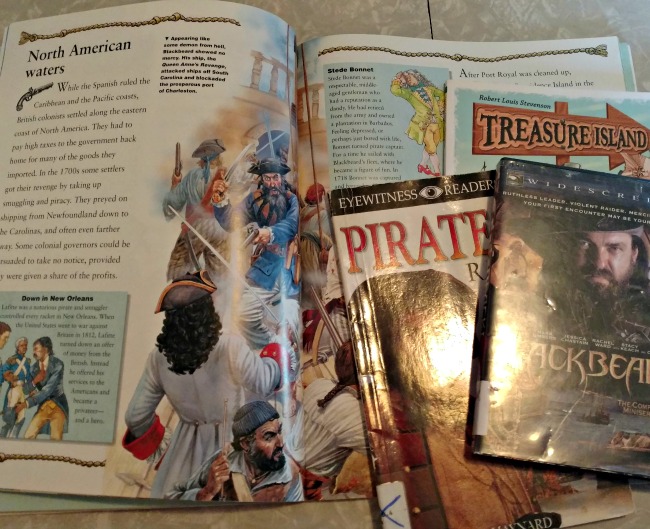 The start of our pirate study is actually a narrative non-fiction by Sterling Point, The Barbary Pirates by C. S. Forester. I love these books because they are written in a story-telling format and are easy to read and absorb, but are factual. This book will also help set the historical context for our study. We’ll also read Sterling Point’s John Paul Jones, the Pirate Patriot by Armstrong Sperry. He was considered a pirate by one side and a hero by the other, which will be a great way to explore the ethical issues I was mentioning earlier.

Other good fiction we found: 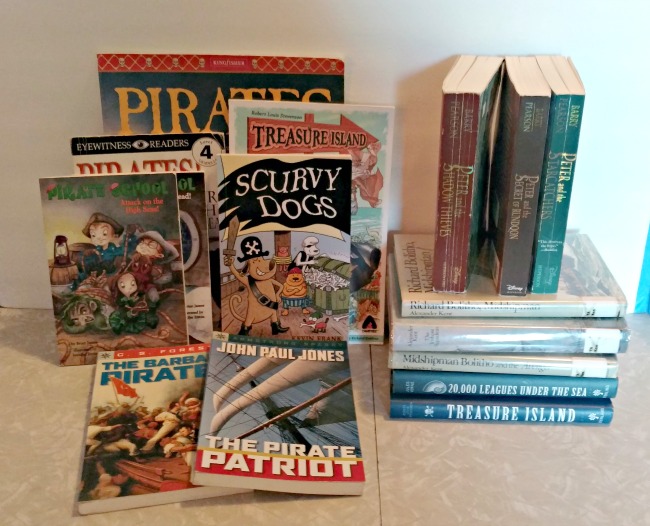 Family movie night is our favorite, of course! For our pirate time, the first thing I did was raid our own DVD cabinet and ask around from friends to see what I could find. Pirates of the Caribbean was a given, but I found quite a bit more that fit in as well. 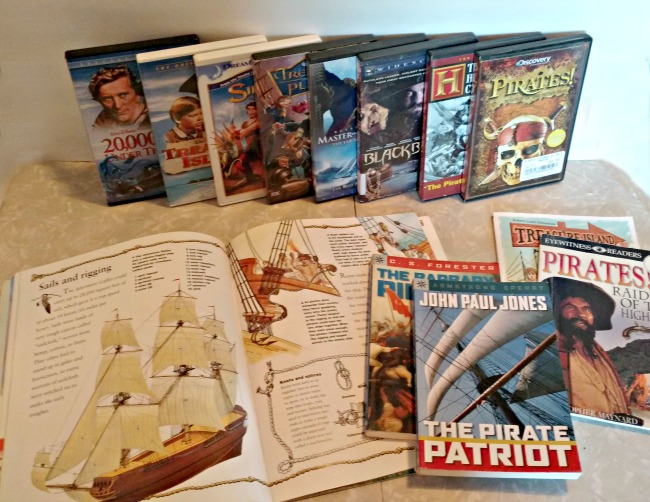 For family movie night, I also found a lot of fun and simple pirate-themed snack and food ideas to try out. You can see a lot of them on my Pinterest Board Pirates and Treasures.

Fish and Chips from The Shopping Mama

Scurvy Dogs from the Pink Teaspoon

This includes documentaries, video shorts, youtube sources, local newspaper articles and more to use as non-fiction filler. Most of these are FREE.

While field trips will be a little hard to come by for us right now other than the Mariner’s Museum (read about our last visit here), I’ve scheduled in time for some fun extra activities around the pirate theme this time. All of them are simple enough to do at home with supplies we usually have on hand and I’ll be sharing some posts specifically about them a little later as I see how they turned out. 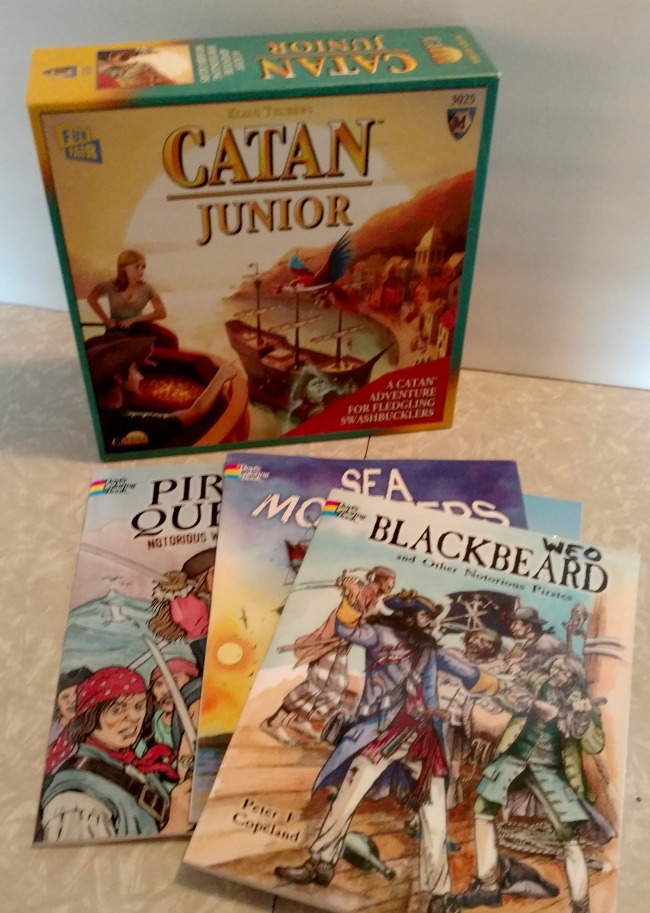 The other thing we’ll be doing as the summer goes along (and we’ve already been enjoying together!) is playing family games together. Turns out there are some great options to go with our pirate theme, including our current favorite Catan Junior. We prefer the junior edition because it’s most comfortable for Speedracer, but we play so often I can see us moving up to the regular edition soon, and they even make an Explorers and Pirates extension pack!

Other pirate games I found that are whole-family-friendly:

Remember to Keep it Simple and Fun!

You can take any piece or two of these lists and turn it into a fun unit study for the whole family. Watch a movie together, read a book together, and do a craft together. We’ll spread these resources and activities out over the next 2-3 months so it doesn’t feel overwhelming. In addition, the games, activities, and fiction help make the topic come alive for the kiddos so make sure to mix them in well!

Be sure to sign up for our newsletter and get your FREE Family Unit Study Planner to lay out your ideas!