We talk about “working sheep” a lot around here.  Basically it means any time we have to round them up and move them, sort them, or put our hands on them for anything.  That “anything” could include tagging, tattooing (yes, all our sheep are inked), trimming hooves, deworming, shearing, or giving medication. 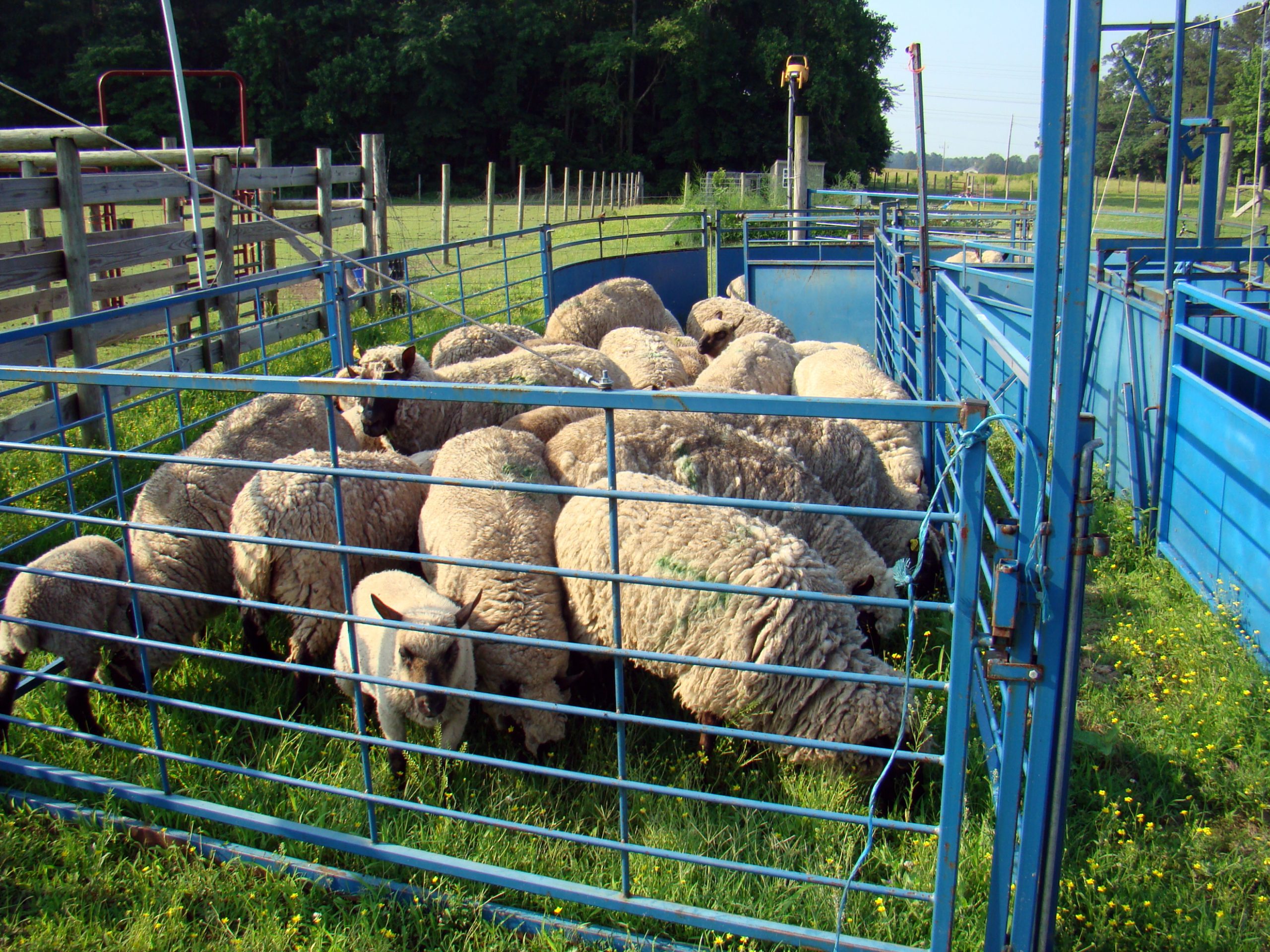 Step 1: The Catch Pen. They don't mind, much, actually. There's plenty of grass, plus a bucket of corn in there waiting for them. June 2010

We’re lucky to have a handling system by Sydell to make it all easier.  (I can’t recommend them enough, for their products and for their excellent customer service!  We call.  We email.  We stop by their booth at wool festivals.  A lot.)  The handling system is all the blue pens, chutes, gates, and scale in these pictures.  Sure, you can just crowd them into a corner of the barn, wrestle them into submission, dose them, and hope when you let them go that you don’t end up catching the same one over and over again.  (They’re sheep, there’s always a dumb one or two that just doesn’t know to run or doesn’t realize that you really, really don’t have corn in the bucket.)  We’ve done it that way and still do if we just need one or two particular animals for something. 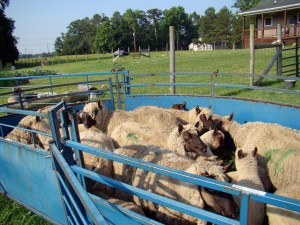 Step 2: We move them forward into the Tub Pen. It's curved, so it forces them around the corner into the chute. June 2010

But the great thing about the handling system is that it’s pretty low stress on everyone when you need to handle the whole flock.  It plays to their “flock mentality” because no one is singled out and everyone moves together from one section to another, to another.  There’s no rushing with meds or equipment because they’re not going to go anywhere, or get away from you, or your arm’s about to collapse.  And there’s no bumbling around with your hands full of squirmy sheep, syringes, or tags, tagger, lubricant, or clipboard. 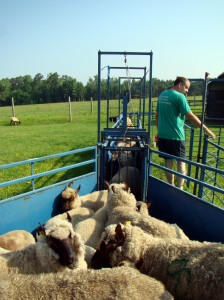 Step 3: The Chute. The 1st gate goes into the scale to weigh each animal. Notice they can't see around them because of the solid panels, but they can see that green, green grass in front of them at the end of the chute? June 2010.

I can work the whole flock by myself if Mr. Fix-It gets called away.  Or would just rather cut grass.  (Working sheep is not his favorite farm activity.  Sheep don’t have motors or wheels or blades or anything hydraulic.)  He helps me pen them and then I’m usually on my own. 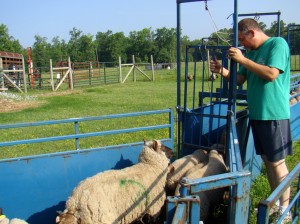 Working the gates. Once the 1st sheep goes through, everyone wants to go through. June 2010.

And in our case, if you have to stop for a potty break (or 50), a change of clothes (or 3), a snack break (or 5), a band-aid (or 2), an untied shoe, or because someone got stuck in the manure spreader in the lean-to…well, the sheep aren’t going anywhere and you won’t have to start all over from scratch when you come back in 5 minutes.

In the summer, we work them in the morning or evening before it gets so hot!  Mr. Fix-It even set up some lights back in the handling field so we can work them after dark and after the kids are in bed if necessary–but the bugs are even worse than the heat in the summer so we don’t do that very often. 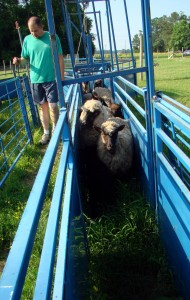 They line up nice and neat down the chute for me to dose everyone. June 2010.

Those top rails above the solid panel drop down so that I can reach each one in line.  Then they’re released one by one or a few at a time into the yard. 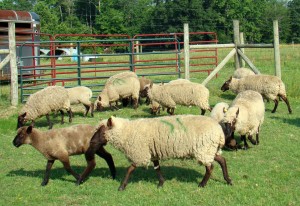 Look how big some of those lambs are already! 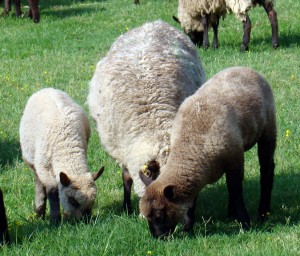 The one on the right is a Hog Island/Clun Forest cross ram lamb. The left one is a ewe lamb that's a week or two younger. Neither belong to the ewe in the middle. June 2010.