We’ve had some trouble with Speedracer pulling his weight around here. He likes to watch everyone work.

Or take a nap while everyone works. 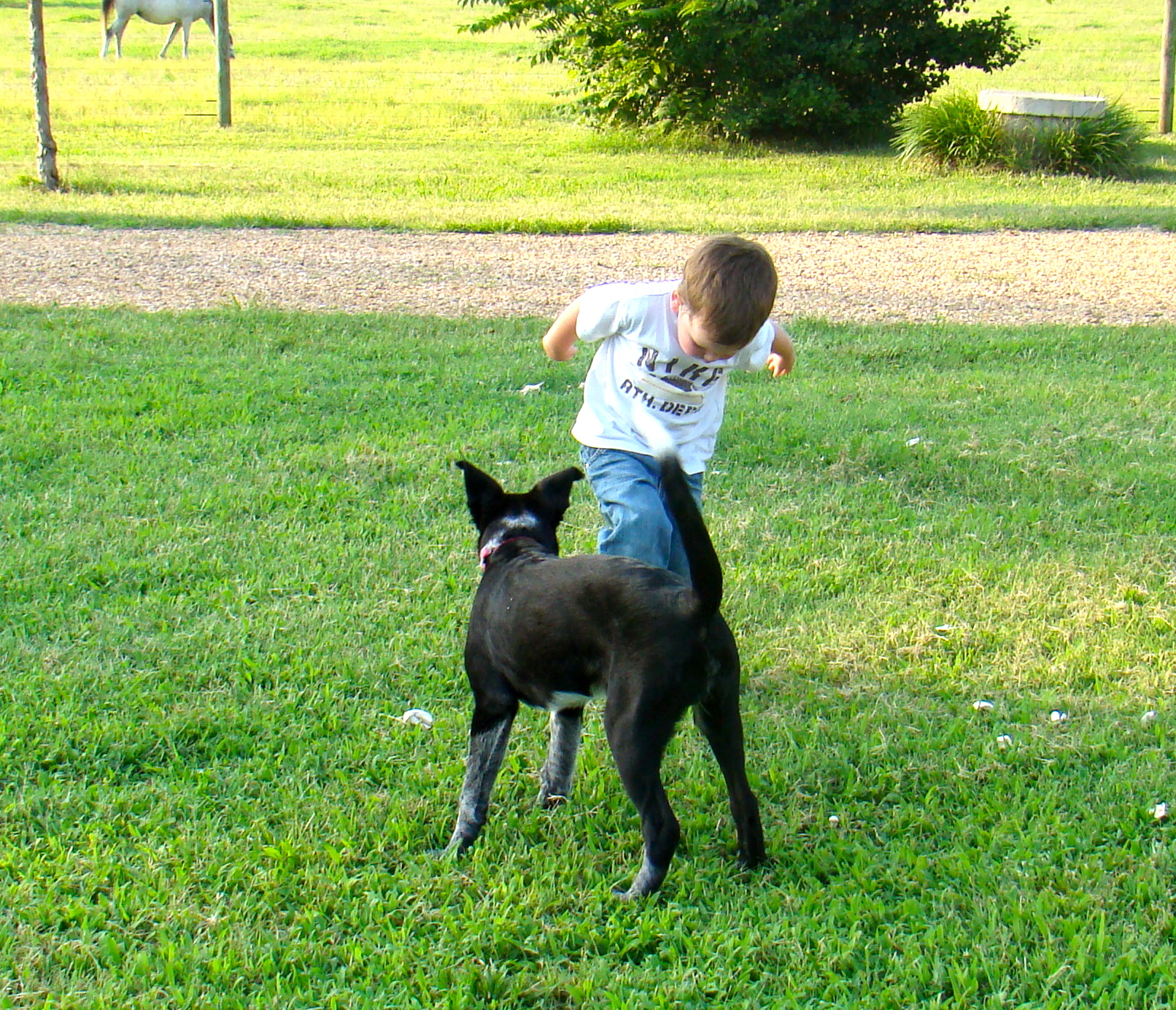 Mr. Fix-It sent him out to kick mushrooms the other day. Penny likes to come along.

So we’re trying to be tough and be encouraging at the same time. He tends to withdraw, start sucking those fingers and declare “I can’t dooo it mommy” about everything. Everything.

From putting his pants on to carrying his plate to the sink to walking up the stairs at bedtime. {Can I just tell you, I had no idea how many times the words “DON’T LEAVE THE BATHROOM WITHOUT YOUR UNDERWEAR ON!” would leave my mouth when I became a mother. Who knew that was going to be the biggest challenge of potty training!) 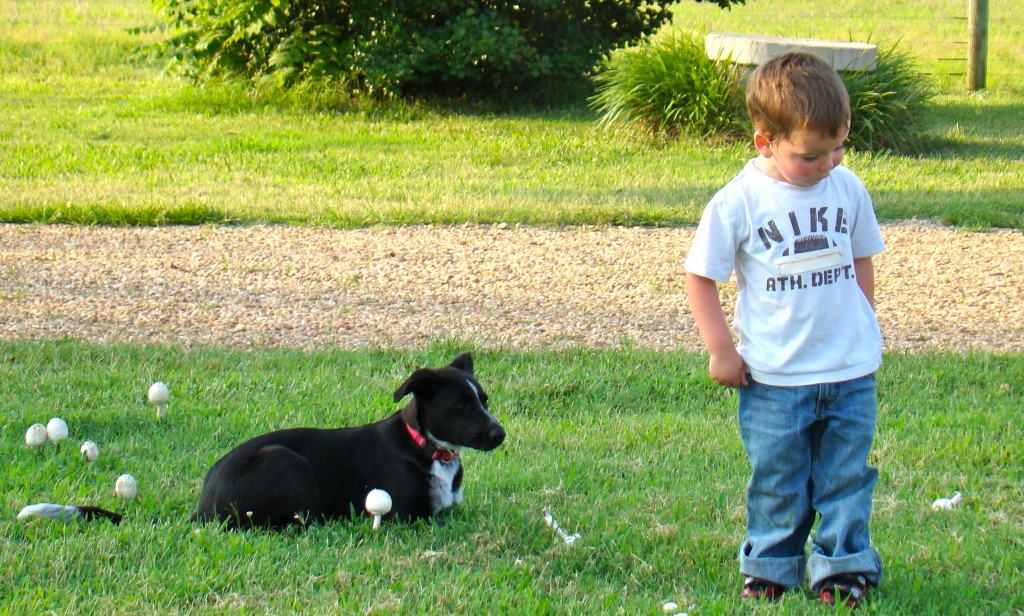 We've got this one spot in the yard where they just crop up like crazy!

He’s only 13 months younger than the Cowboy, but I tend to forget that and think that he’s too little to do stuff if he fusses about it. This summer we’ve (ok, mostly I’ve) had to start taking a tough love approach. It probably started over putting his boots on. I have pictures of him from last October putting his own boots on. Now suddenly 10 months later he can’t do it? 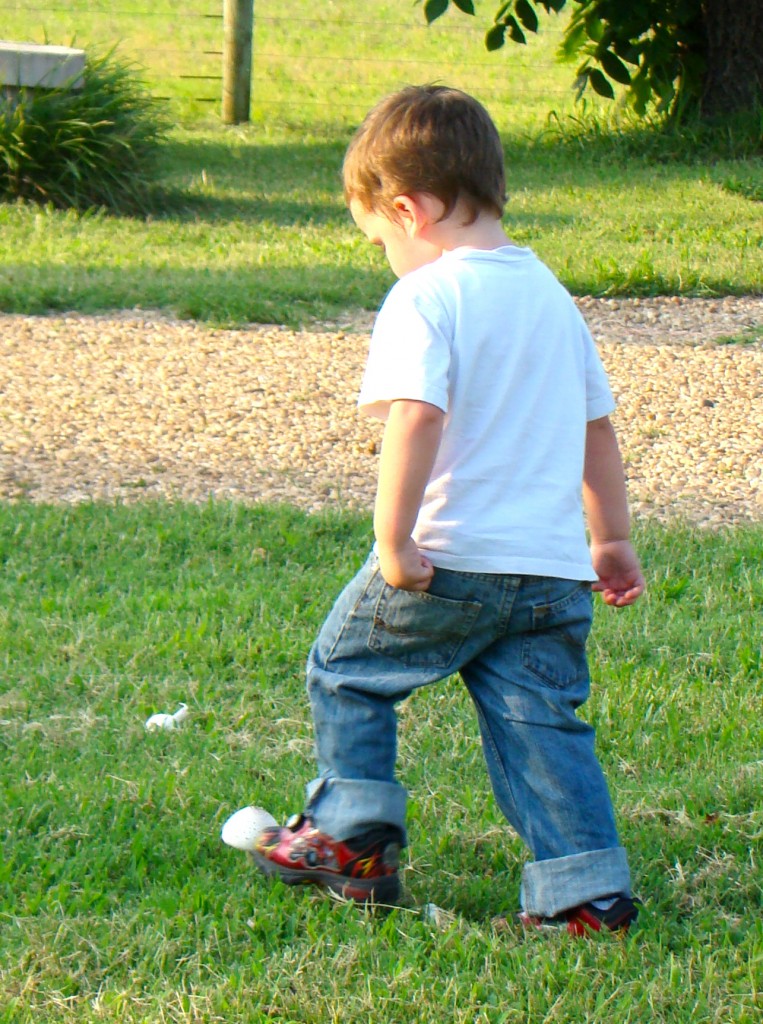 This was a perfect job for him. Fun. Short. Immediate success!

Or maybe it was seeing the Ladybug and the Cowboy are out there huffing and sweating while dragging hoses while he’s sitting on the porch waiting for snack time.

It was time to draw the line.

So we’ve started a two-prong attack on Mr. Lounger this summer.

First, we (again, meaning I) have to stop giving in. (Except for carrying him up to bed at night. Those cheek-to-cheek snuggle moments are my manna from heaven.) If he can do it when he wants to then he can do it when I want him to. 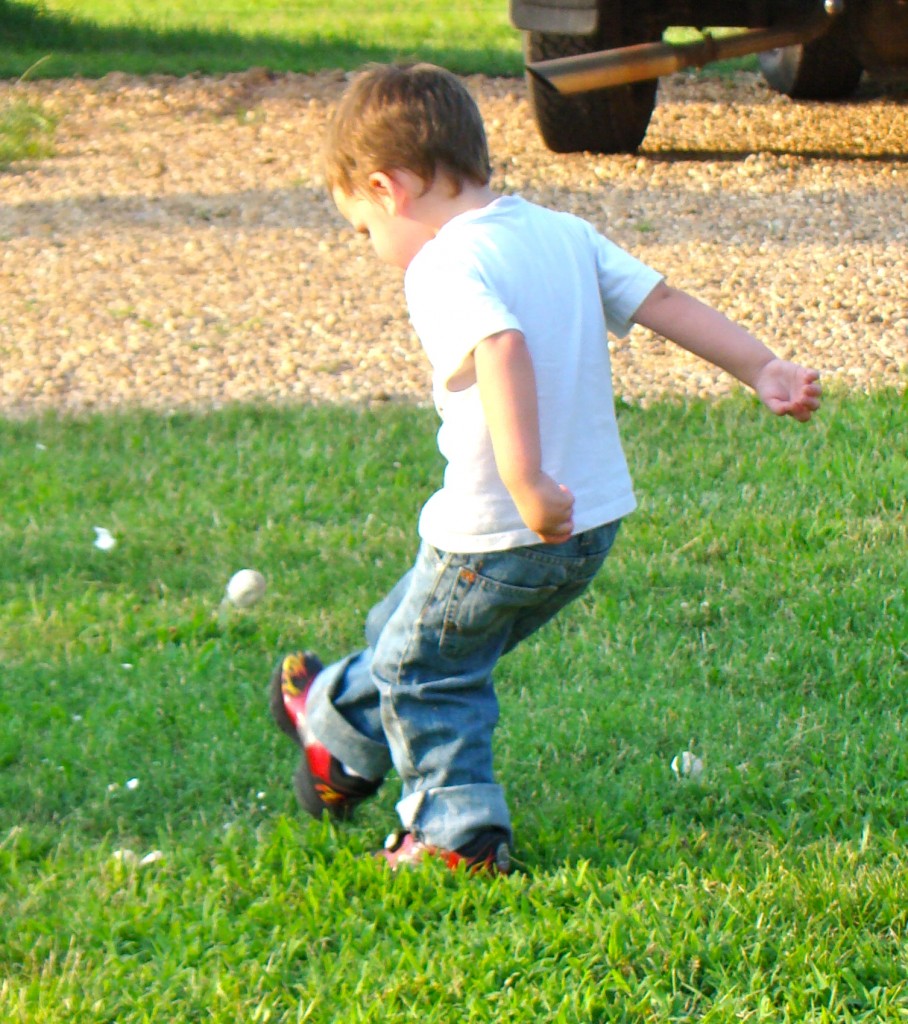 Looking at this picture I have no idea how he didn't end up falling down!

And secondly, we’ve started trying to give him “big boy” chores to help out with and stop treating him like “the baby.” And giving him big high-fives and knuckles when he does it. Trying to make it exciting. Make it the “big boy” thing to do.

We’ve been training him to feed the chickens by himself. He’s learned how to feed Penny and Scratchy by himself. And I’ve been letting him turn the water hose on and off by himself. (And then quietly sending someone to check and make sure it’s off tight!) 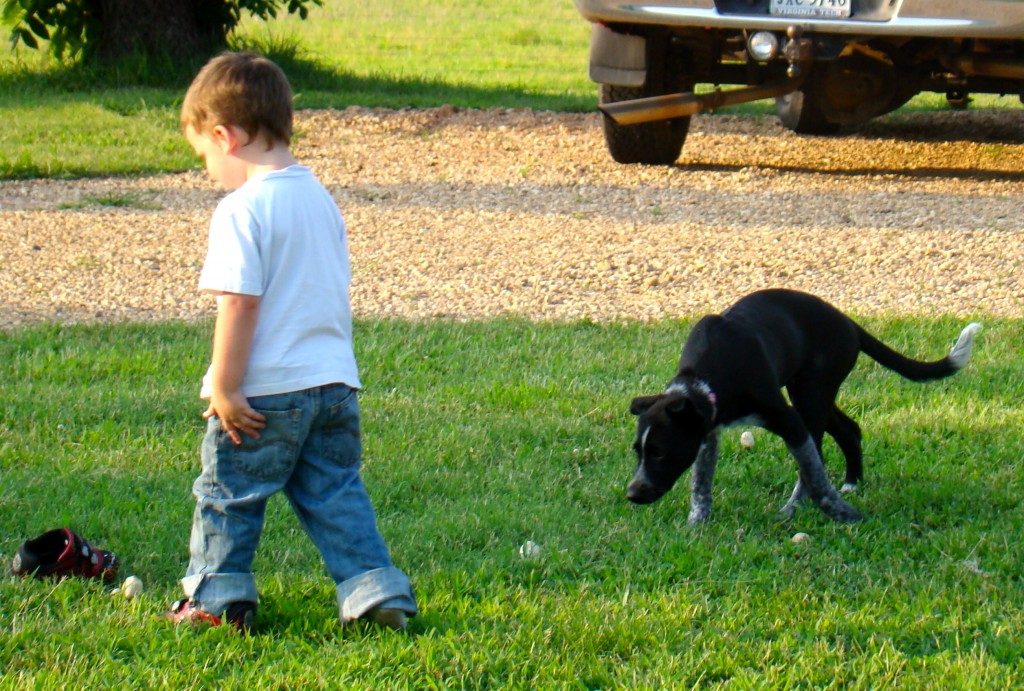 Mr. Fix-It’s been giving him “special” chores and errands too. It’s surprising how much excitement can be generated simply by not letting everyone participate. If the Ladybug and Cowboy aren’t allowed to help too, suddenly, instead of a “chore,” kicking down mushrooms is a privilege! 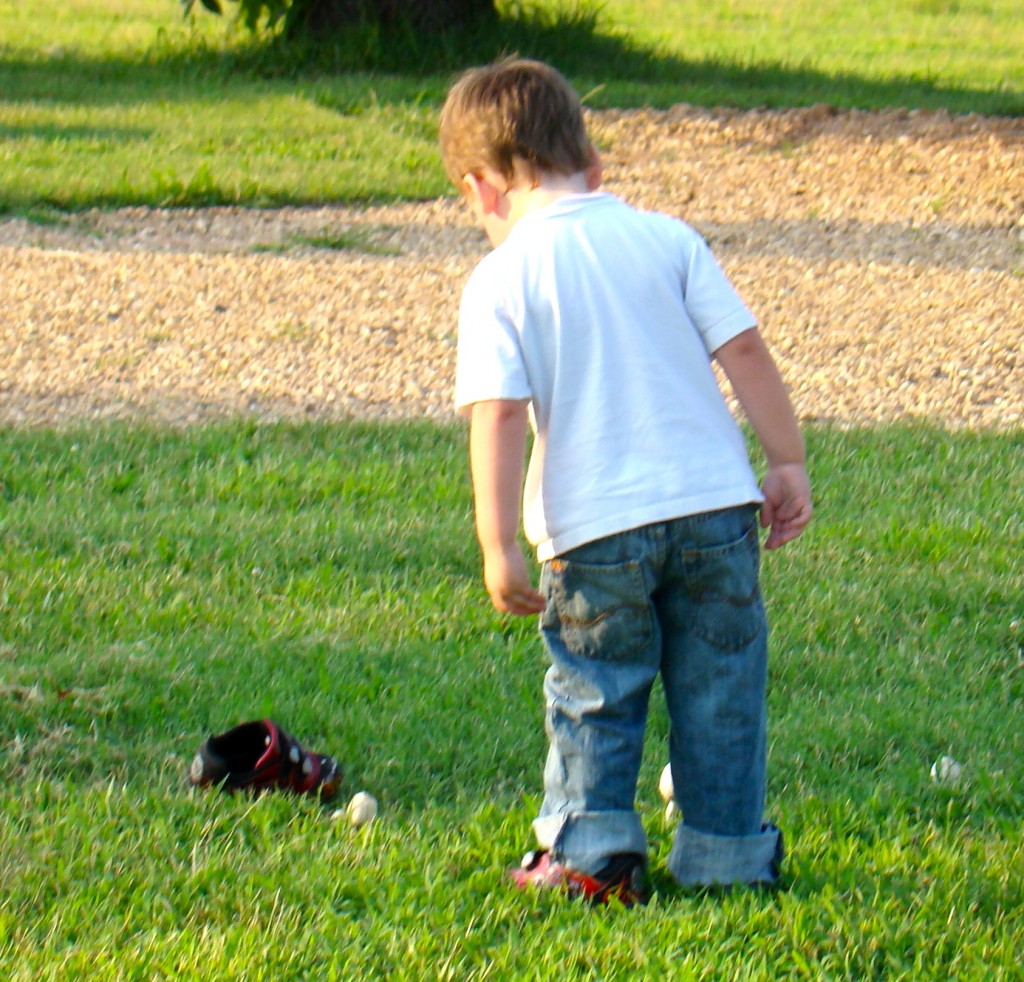 He's contemplating kicking them without shoes.

It’s improved his attitude about helping out a lot. I still can’t believe that he’ll be off to K3 preschool in just 4 weeks…cue weeping and gnashing of teeth!…I mean, he still puts his underwear on backwards. 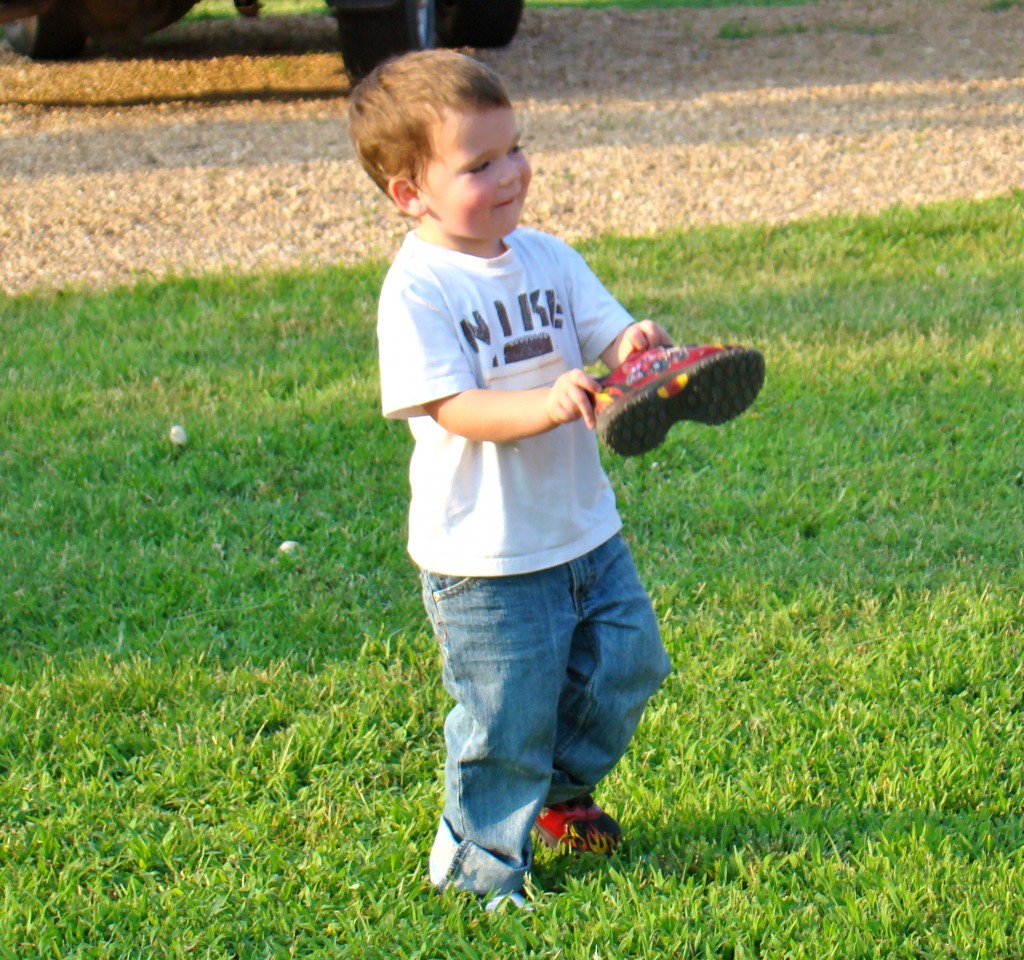 His true skill is inciding riots of laughter.

But at least when he gets there he’ll know how to clean a chicken house and roll up temporary fence. Those are valuable life skills too…right?