Mr. Fix-It popped in the house the other day and said, “Hey, come outside. And bring your camera, you’re gonna want to see this.”

Our Ladybug was out there cutting the grass, all by herself. My heart was pitter-pattering away, but Mr. Fix-It was so proud and excited. He loves to be out doing something–preferably something new or something involving engines and wheels–most of the time. He learns by doing. By seeing. By taking it apart and putting it back together. Not by reading the directions. (Never by reading the directions!) {smile} He learns by watching and hearing, and then doing–not by reading and then doing.

Those two are alike that way. 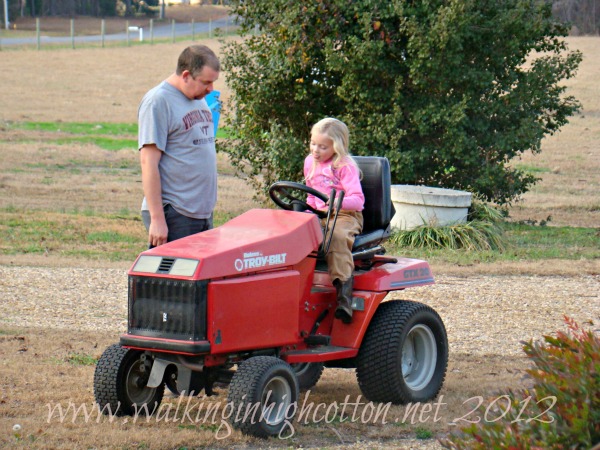 He had to add a couple round weights to the seat to override the automatic shut-off. And he had to add a block to the pedal because she couldn’t reach. And sometimes she had to lean waaaay back, even with the weights, to keep the auto shut-off from choking it out. But she was driving. All by herself. 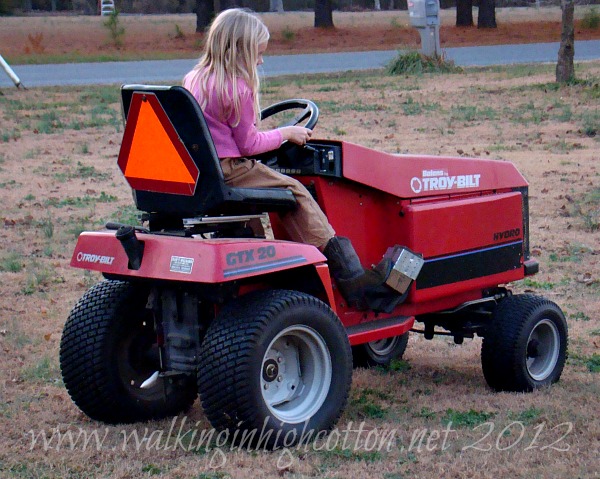 Our Ladybug has struggled in school and I think part of it is because she’s a do-er. (Of course, she’s also a girl, so she’s a talker as well!) She would much rather empty the dishwasher, wash eggs, do laundry, set the table, cook dinner, and feed the animals, than read two pages of Science homework.

There’s a time and place and purpose for everything, but I’ve come to think that sometimes we, as a society–and especially as public-schooled society!–tend to value thinking over doing. And as a result we have kids that don’t do much of anything other than recreation. 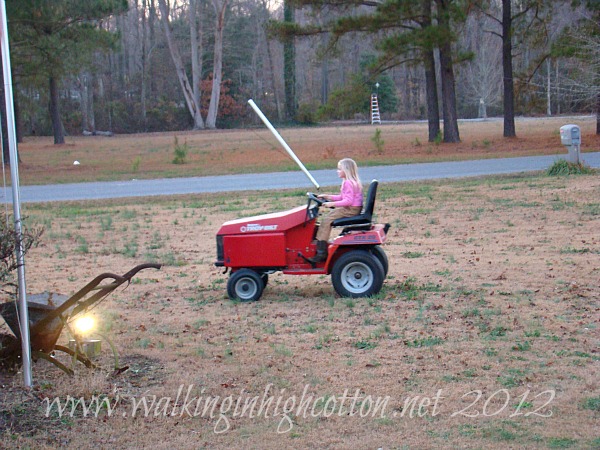 People often ask me how we get our kids to do chores.

My first answer is always that we make them do it. 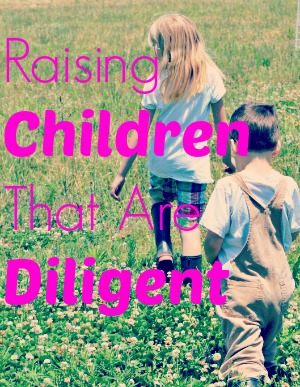 If you can’t get your children to do chores, you don’t have a chore problem, you have an obedience problem. Our crew does their chores because they’re told to do them. And we get push back, and we get attitude, and we get little people running around distracted (the Ladybug) or lazy (Speedracer) or trying to take short cuts so they can go play (the Cowboy)–and we discipline them for that. When given a job, we expect them to be respectful, responsible, and work diligently as unto the Lord and not men. No matter what the job is–or whether they like it or not. 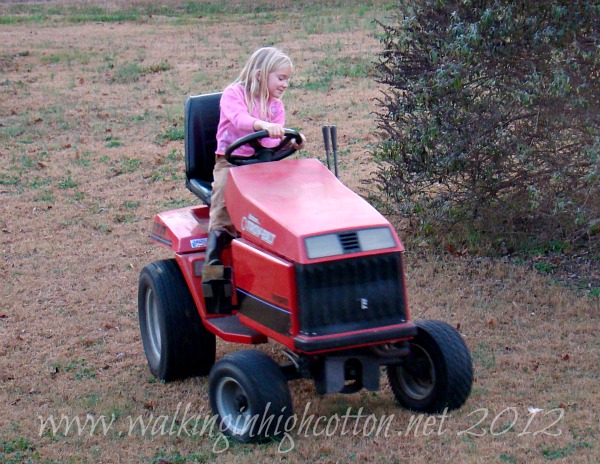 My second answer is that we let them do it.

We let them do real work. We let them contribute meaningfully. We let them see us doing the same jobs just as often as they do. We listen when they say they want to do a job and give them a chance. (Mr. Fix-It is better at this than I am. He’s a natural do-er too!)

We let them make mistakes, and fix them. When the Ladybug unloads a dirty dish from the dishwasher and puts it in the cabinet without paying attention, I make her take it (and the other three it touched) down and hand wash them. When the Cowboy says the water buckets are full and I go out there two hours later and they’re not, I go get him and make him fill them up.

There are no short cuts to training your children to be diligent. You, the parent, have to be just as diligent not to take short-cuts. You can’t just do it yourself because it’s easier, or quicker, or just done right. You have to grit your teeth and let them take 45 minutes to empty the dishwasher even though you can do it in 8.3. 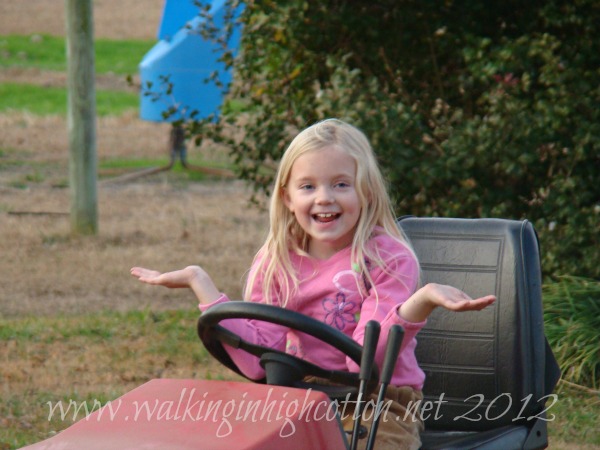 But lastly, we let them enjoy it.

We give them the fruits of their labors. We give them partnership in the farm and household. We give them authority over their experiences. We let them give “tours” to visitors, and explain the jobs they know. We let them give away eggs they gathered and vegetables they grew to their teachers and friends. We let them have their own work gloves, and kid-sized garden tools, and let them tell us when we need to buy chicken feed or replace a gate latch.

It’s exhausting and it takes a lot of praying and deep breaths. And a lot of ignoring the whining. But they will be kids that can do in the future. Heck, they already are!