Our family is so blessed, just over and over, by the hard work of our church’s children’s program workers. On Saturday the crew got to participate in the first (hopefully of many!) pine car derby with their Wednesday night Master’s Club group.

I posted pictures of them working on their cars over on Facebook earlier in the week. 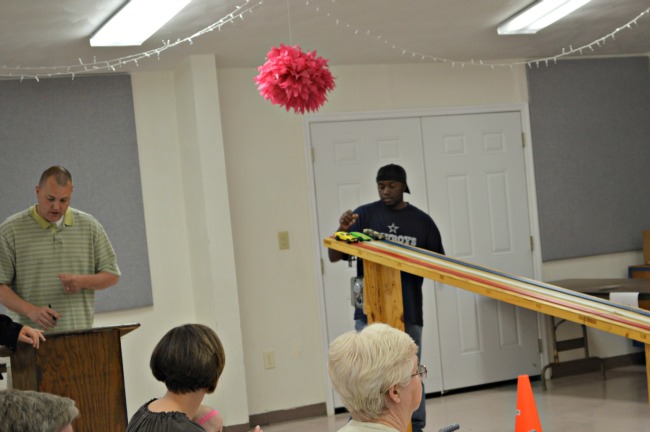 Speedracer was the yellow car and the Cowboy was the green car–lining up against each other!

I have to admit, it’s a hard balance to strike as a parent–you want your kids to have a healthy, competitive spirit and a drive to do well. But you also want them to be honest and graceful in winning and losing. The boys were in the same age class, so they raced against each other a few times. We were a bit worried about hurt feelings and disappointment. The Cowboy in particular really wanted to win. 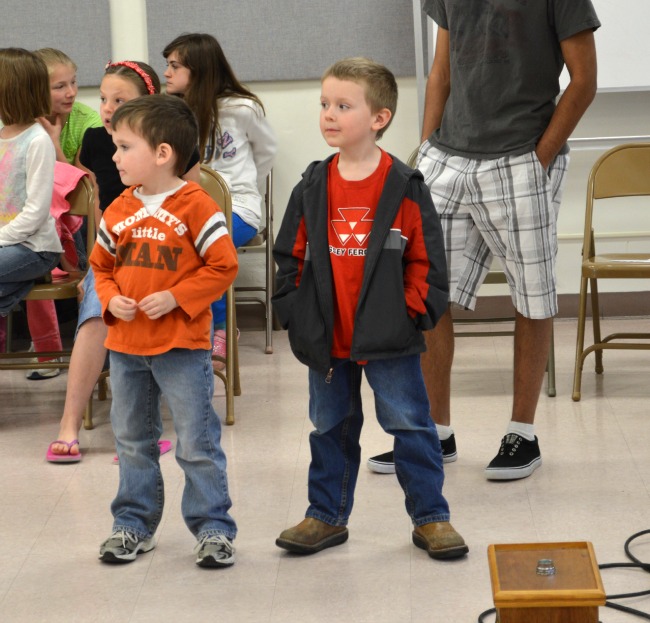 We were holding our breath, watching them holding their breath!

The Cowboy was racing a lean, green machine he named The Knife.

The Ladybug was racing a sleek little gray and hot pink car she called The Mongoose.

And the Speedracer? He was racing a bright yellow boxy car called Bumblebee…of course. 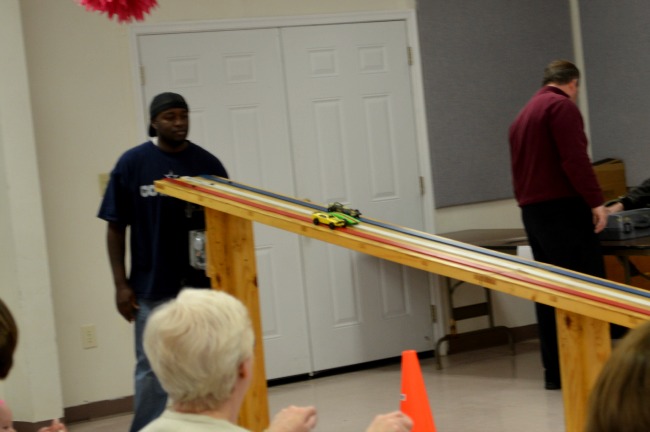 And they all made me proud! They were graceful under pressure (if a little shy about being up in front of everyone!) and were enthusiastic about everyone’s victories–large and small.

When the Ladybug won an award for sleekest design the Cowboy was just so overcome he leaped up and hugged her when she came back to her seat! (The picture turned out hopelessly blurred, of course!) She was a little red in the face from everyone’s collective “awwww…” but it was precious! 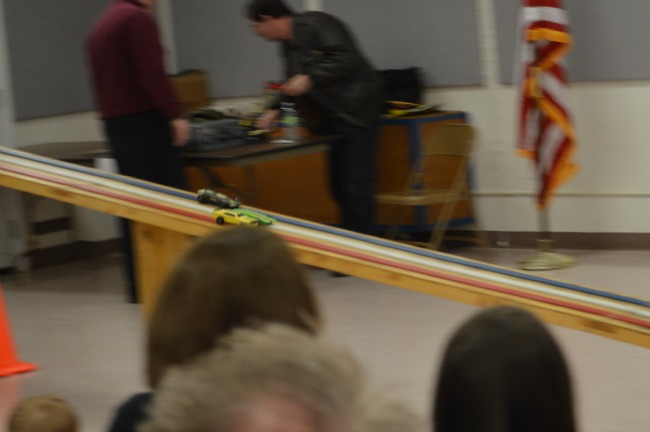 Turns out that third car came on strong and they both got passed before the finish line!

Speedracer ended up getting a ribbon in his class.

The Cowboy never won a race at all, but The Knife won an award for sleekest design. He was a bit disappointed by that, but he totally held his composure. Self-control has not always come easy for our Cowboy and I thought it was a huge victory for him! 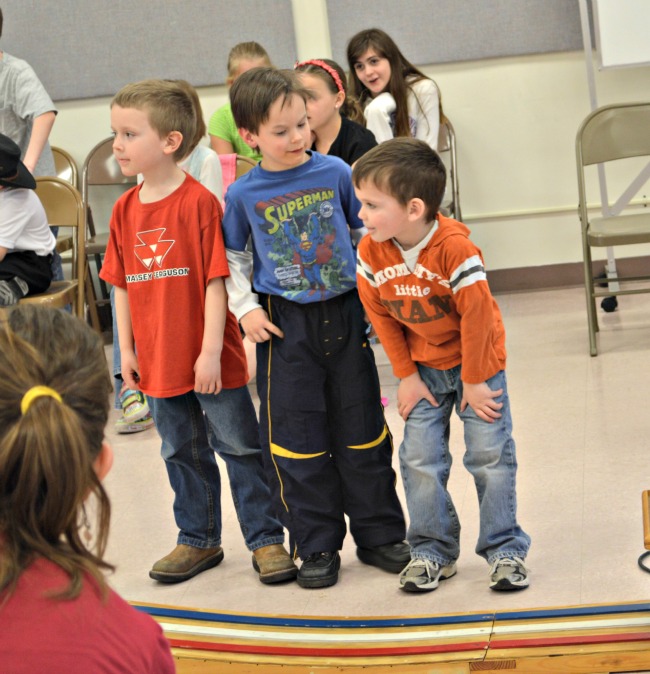 The boys with a church friend who ended up being the big winner in their class.

The Ladybug’s Mongoose didn’t win on the track either, but she also come home with a design award. 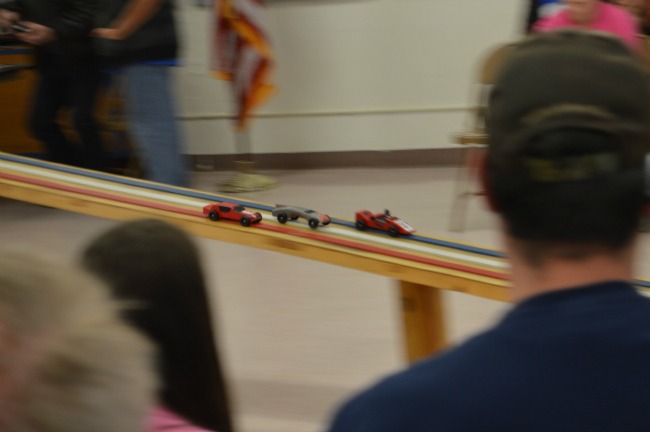 That’s The Mongoose in the middle.

She was also racing against her friends and held her disappointment in check well. I think she was more concerned about having to stand up and walk back and forth in front of everyone than the actual race. {smile} She can get rather shy in front of crowds. 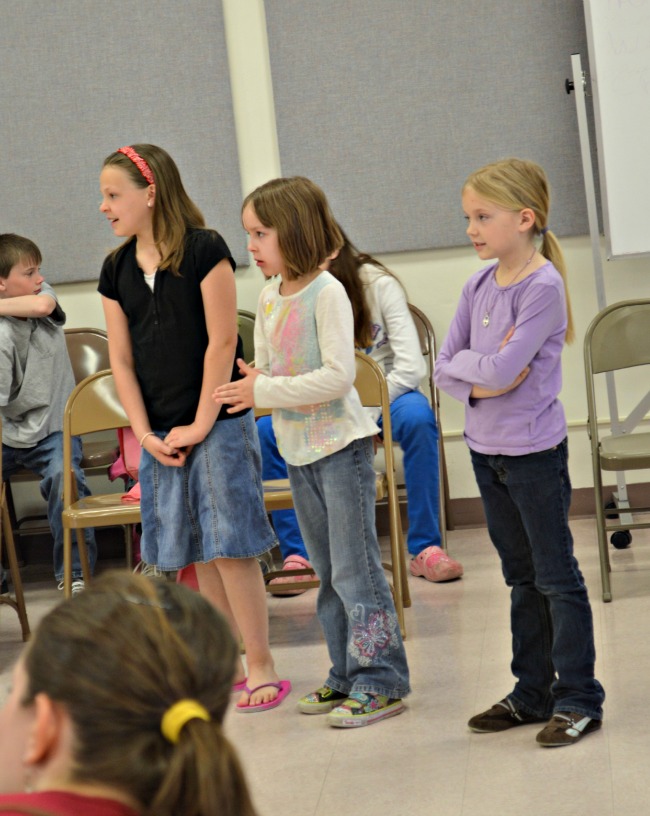 That’s my Ladybug in purple.

All in all, it was a good day! 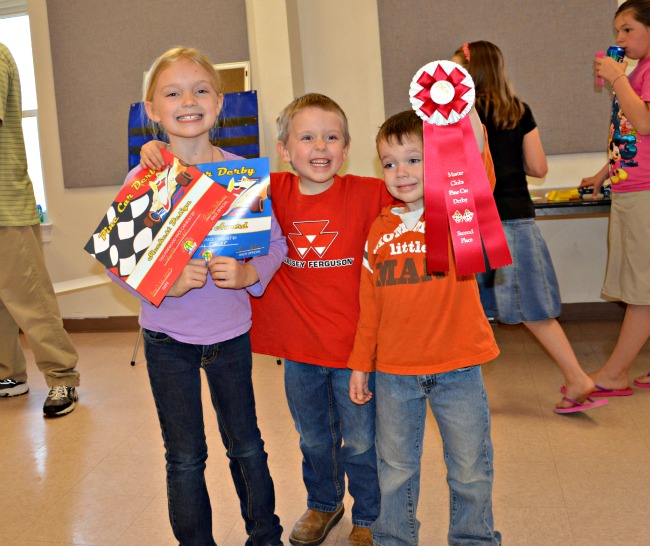 These are clearly not faces of disappointment!

And when Speedracer looked at me this morning and asked me what “spiritual maturity” was–derby day was a perfect example. I feel like all three of our munchkins have just made leaps and bounds in growing up over the last 5 or 6 months. Speedracer especially since around February (which is good, because back around January I wasn’t sure we were going to make it to February!)

Do you ever just feel like your kids took a giant leap up in their maturity and understanding? Not just a gradual progression, but suddenly–WHAM–they’re on a whole new level? I think this summer is going to be big for our little crew.