Over the holiday weekend, we woke up to chickens out of the chicken pen. Now if you follow this blog, or our Facebook page, this is nothing new around here–it happens every few days. It happens so often I can’t even find links to all the posts about it! (But here’s one, and here’s another one!)

But this time, Mr. Fix-It was home from work for the day.

And the ducks were out.

And Mr. Fix-It likes those ducks. 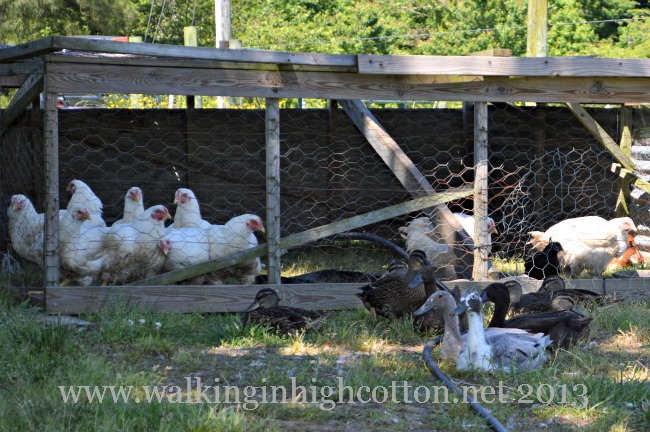 Look at the faces of those white meat chickens! They’re too fat to get out of the holes the chicks and ducks slip through!

Our homemade chicken pen (also called “the field pen”) is several years old now. Every year when we go to use it, Mr. Fix-It patches it up and re-braces it, if needed. It gets towed around the field every. single. day. so it sees a lot of wear and tear. And every year a different section of chicken wire ends up rusting out and some enterprising little lady pops through chasing a grasshopper or something, and suddenly we have a flood of chirping little escape-artists on our hands. 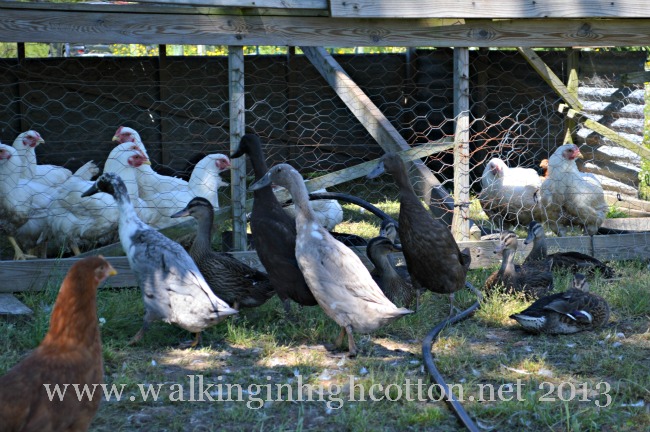 The ducks are not nearly as adventurous as those young hens. They like to just hang out in the shade.

I spend a lot of time and zip-ties patching it up, but I’m pretty sure it’s due for a major overhaul soon.

In the meantime, Mr. Fix-It and the Cowboy were not about to have any of our ducks end up wandering into the road! 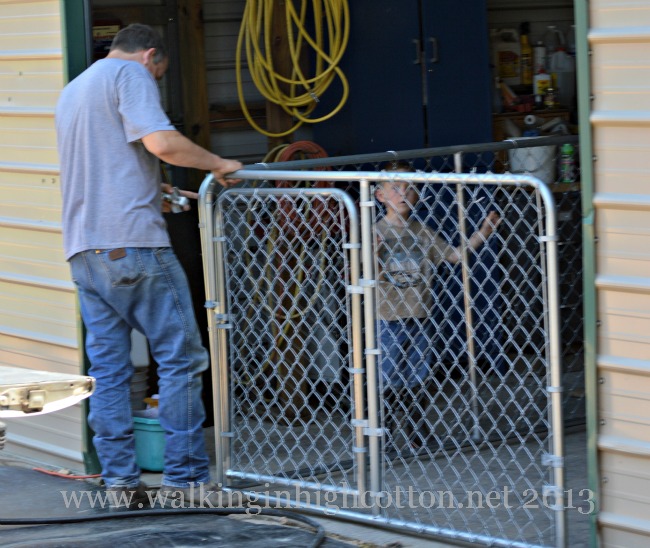 They got to work right away in the garage.

Mr. Fix-It has been brainstorming on a duck pen for a while. He wanted it to have room for a swimming pool, and it needed to be mobile–like everything else around here. It also needed to have nesting space, since we’re hoping for duck eggs from our runner ducks! 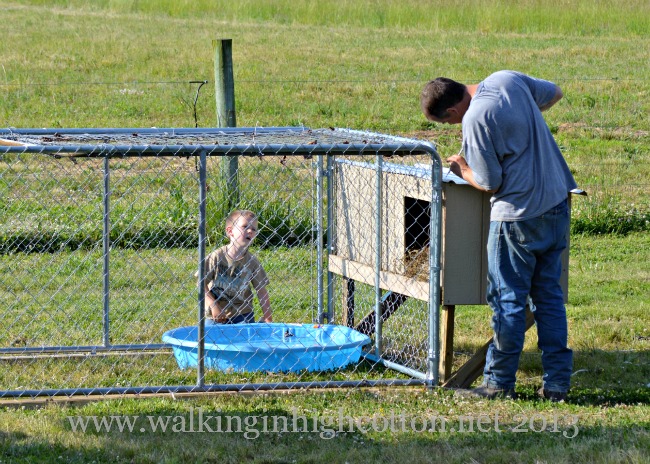 They worked on it all day together. The Cowboy even skipped lunch to keep working!

The Cowboy was his full-time helper all day long. All. Day. Long. They even skipped lunch because they were busy. (Although the Cowboy put enough steak away at dinner to make up for missing 10 lunches!)

They wanted the pen large enough for the ducks to have grass and a pool, so they decided to put the nesting box on the outside. 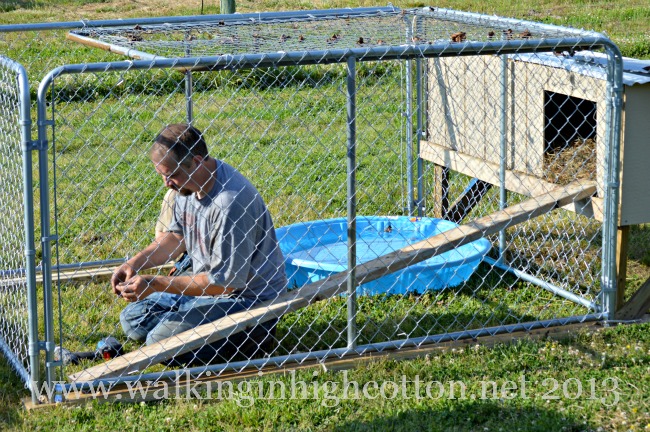 Our ducks don’t seem quite as agile as our chickens when it comes to hopping, jumping, and climbing. They needed a ramp.

Mr. Fix-It screwed some tin on the nesting box for now, but he’s going to go back and add a hinged lid later when the ducks start laying (we’re hoping around the end of August, early September!). He also used another piece of old dog kennel as a top to help with predator control, but it’s not completely secure. It’s mostly for hawks–not for raccoons and such. We threw an old pop-up tent cover over that as a shade. 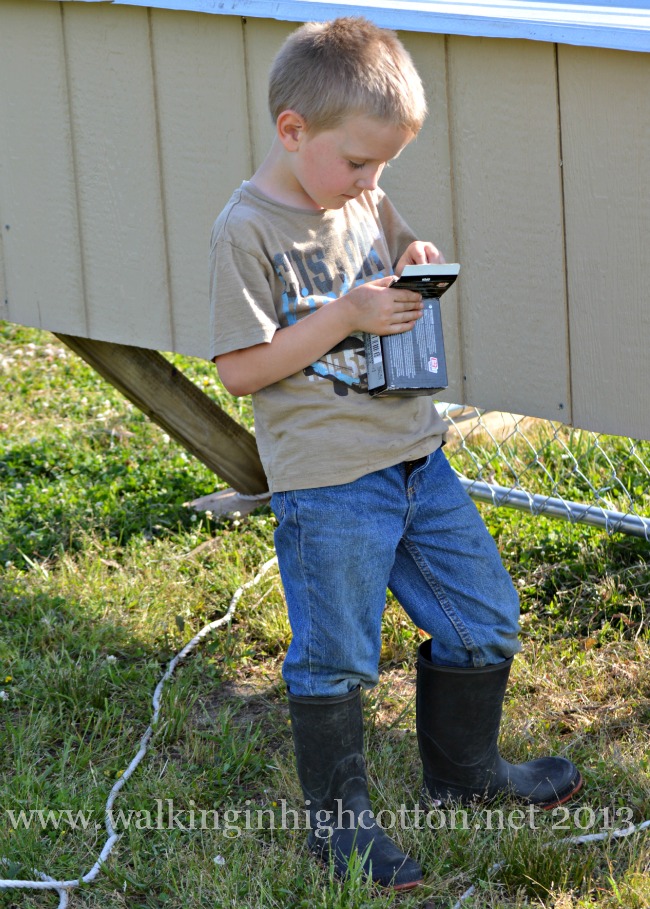 The Cowboy is quite diligent if you take the time to engage him in a project.

When it came time to actually catch the ducks and put them in there, it was all hands on deck. Too bad I wasn’t able to get any pictures–what a circus! Ducks and chickens flapping around, kids hollering and running, the dog barking madly from the backyard…You know, when it comes to feathers fluttering just out of reach, sometimes kids and dogs are exactly alike! It’s like you flip a switch in their brains and they go from catching to just flat-out chasing in the snap of a finger! We have to rein them in–every 2 minutes!

But eventually everyone was accounted for.

And the most recent break-out spot on the chicken pen was patched! 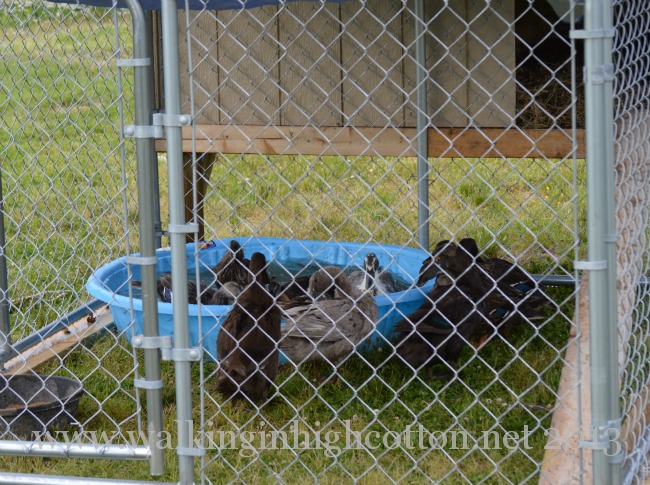 Umm…that pool? It changed their whole perspective on life! It’s like they rediscovered their duck-hood.

And the ducks? Oh man, they LOVE that pool! It took them all about 30 minutes to get up the nerve to get in there the first time, but it’s like it revolutionized their daily lives! The runner ducks enjoy it, but those Rouen ducks–the ones that look kinda like Mallards–they’ve practically lived in that pool since they got in there! 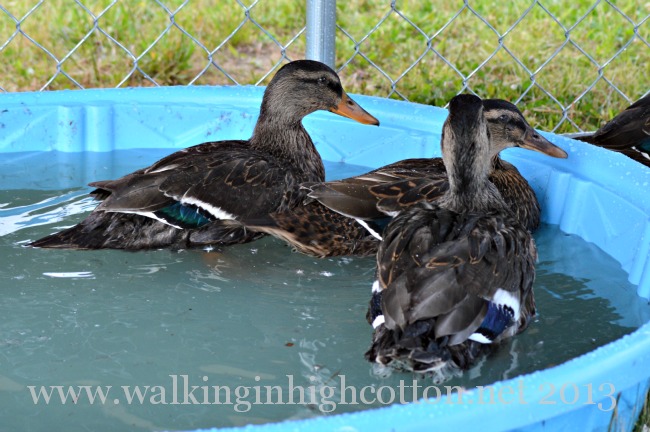 Now that they’ve grown up some, I’m pretty sure the Rouens are all females. Still not sure about the runner ducks…

You may have noticed in the pictures that the whole thing is sitting up on two skids so it can be moved. There’s a tow rope around the support legs under the nesting box to haul it around every few days. We’ll be adding some cross-braces to the bottom of the pen to stabilize it for moving and get the pool off the ground to save the grass and make moving day easier. But so far everyone seems quite happy–except for 2 small red layer-chicks who seem to think they’re ducks and keep escaping their pen to go visit, poolside.

If you’re thinking about backyard ducks or chickens, here’s a couple books we would recommend from our own shelf…

How are things around your yard and homestead?