Yesterday I started a series on what “helping” means during lambing season. Part 1 talked about what a “normal” lambing progression should look like–so we know what is not normal, and when we need to help. Today, I’ll share a few of our “not normal,” but still common, lambing experiences–and the decision-making process we go through when facing them. 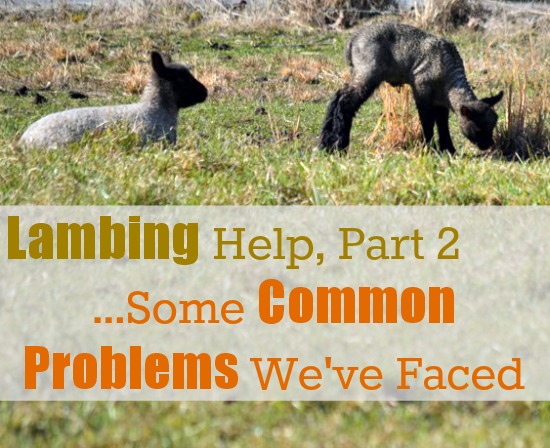 My readers and Pinterest-friends know that I’m quite the bookworm. I did a post last year on some of my homestead bookshelf favorites. The problem with all that farm reading is that the books tend to be full (I mean chapters and chapters!) of information on what to do if things go wrong. You get one page on “normal” and then 4 chapters on problems, illnesses, complications, etc. I understand why, but it can seem a little overwhelming in the beginning!

But we’ve been blessed that most of our experiences have been fairly simple and  common–and I think that’s pretty typical. Unless there is a deep-rooted management problem, the books are presenting the worst case scenario, not the most likely scenario. 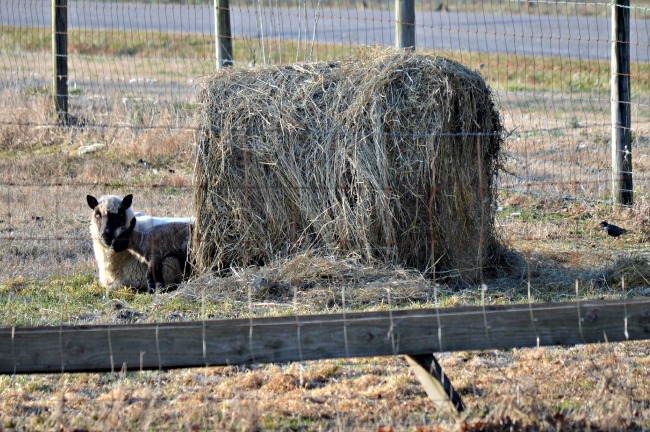 Here’s our story from Monday.

On Monday Mr. Fix-It called me as he was driving away around 7:15 to tell me we had a new lamb. (I was inside with my sick Cowboy.) I went out and the momma was up licking the baby, and the baby was wobbling up. I watched for a few minutes, snapped a few pictures, and went back inside.

I heard some baby cries, so I popped out about 20 minutes later and the momma was laying down while the baby was baaaa-ing and looking for milk. Hmm…if you read yesterday’s post, you know that we don’t expect the momma to lay down on the job. {smile} So I walked outside to take a closer look. The momma got up and wandered away a little bit and I saw a birth cord that was not the afterbirth. Ok. This means one of two things–either there’s another lamb coming or we have a retained afterbirth. Twins are good news, a retained afterbirth is a big problem. A call the vet problem. 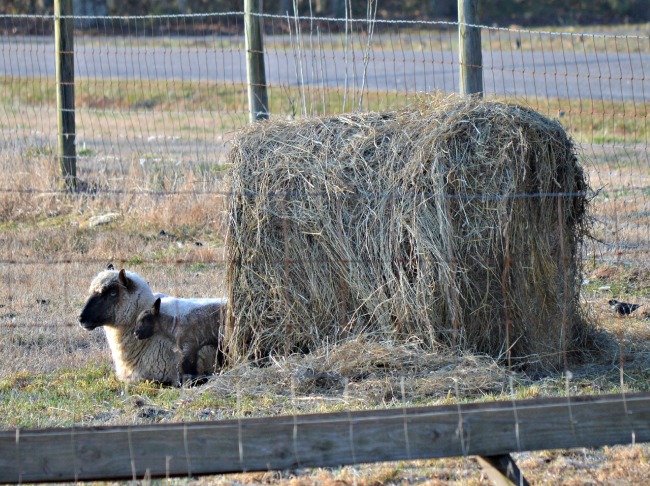 I watched for about 10 more minutes and the ewe was licking and nickering and generally doing what she’s supposed to and pretty much acting normal, but no sign of an afterbirth. Ok. Technically, ours usually pass within 30 minutes, but the vet has advised us that it can be up to 2 hours before we have to really worry. That’s not “normal,” but it’s medically acceptable, and there was no signs of actual distress.

I mentioned yesterday that we have a “hands-off” philosophy. That means we have stages of management. This situation was outside of “normal” which meant it needed extra vigilance, but it was still within “medically acceptable” and no one was showing signs of distress, rapid deterioration, or even abnormal behavior other than a bit of restlessness. So I checked on the Cowboy, bundled myself up a little more, and parked myself in the field with a couple old towels, just to watch for a while. Based on her behavior, I was thinking twins.

About 8:30 the birth cord produces a water bag–this is a sign of twins. Good. 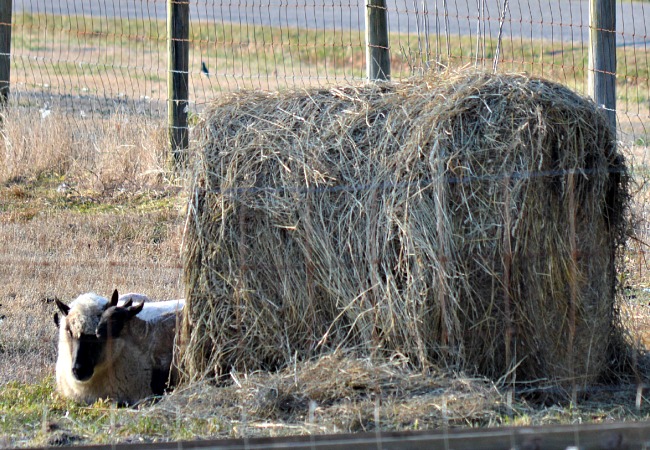 By 9:15 there was no change and no progress toward another lamb. Hmm…we’re 2 hours in since the first lamb was on the ground  and past our “normal” birthing time for twins. I was about to head inside to consult my dog-eared and much highlighted copy of Raising Sheep and call Mr. Fix-It when the Cowboy wandered out in his pjs to check on me. I headed him right back inside and bundled him up. We came back out just in time to see the second lamb come thrashing out while the ewe was still standing up!

Then lay still on the ground and she walked away from him! 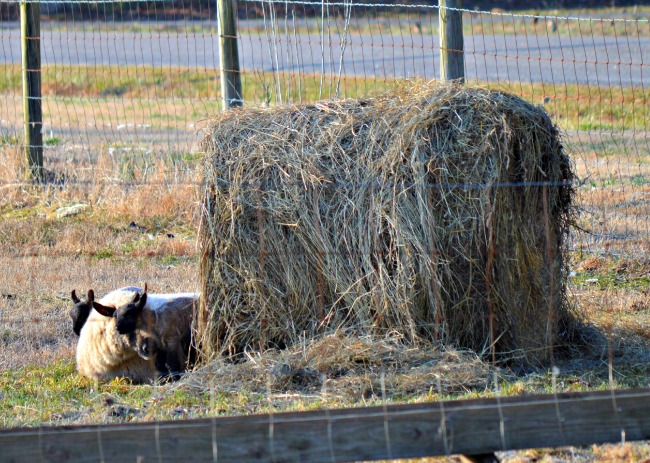 So we hustled out there with towels and the poor thing was still covered in birth slime and barely breathing. Apparently the thrashing had burst the sack and it had sucked a lot of mucus and slime into its mouth and nose. I started scrubbing its head and face clean and the Cowboy ran for the much-hated nose-sucker-thing. We suctioned gobs and gobs of ick out of its mouth, and there was still a liquidy-rattling in its breath. So I pulled a Dr. Pol (we love that show!) and swung the little one in a half arc by its feet–carefully! Which is when the Cowboy hollered “it’s a girl!”

The swinging caused the lamb to start coughing and sneezing and more mucus flew out. When she was finally able to start baaaa-ing like normal without that terrible rattling in her chest, the ewe turned and headed right back over to us! We gave the lamb a little more scrubbing (the rubbing from the towel is like the momma licking and stimulates their little brains and bodies), put her up on her feet and stepped back. She started tottering around crying.

Her momma hustled back over and started sniffing and licking her–and took over from there! 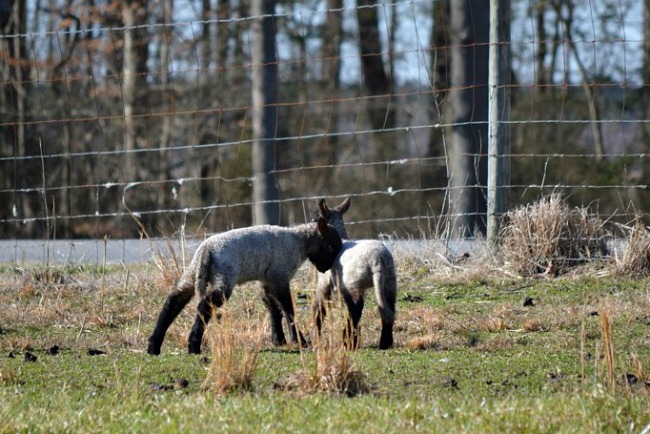 If we hadn’t been there, the momma might not have come back to clean the mucus off the baby. After a long, hard labor, she might not have been instinctively motivated to come back without that clear baby cry. Or the baby might not have been able to clear its lungs and get to breathing normally. Or the baby might have ended up with mucus in its lungs, but struggled up, and ended up with an infection from the fluid inside. This situation required us watching, 5 quick minutes of action, and then us backing off and watching again–and all’s well. These quick, minimal birth problems–mostly provoked simply by a hard labor–make up the vast majority of what we encounter. And usually amount to about 1 out of every 15-20 births.

Tomorrow I’ll share about “pulling a lamb.” It’s a little more intense, but thankfully even less common in our flock. These posts aren’t meant to be “how-to” guides or replace guidance from your vet. They’re just to give you some insight to what all that “book talk” looks like in the real world, on the grass, out in the pasture.

And if you’re looking for more specific information, here’s our very favorite sheep books–the ones we keep close by all year long!