I’ve been diving into some homesteading details lately and sharing about what lambing really looks like, out in the field, around here. Everyone manages their livestock differently, so this is not meant to be a “how-to” series or a recommendation. It’s simply meant to be a snapshot of “real life” out in the grass around here. Read Part 1…What Does Normal Look Like? for a background setting. Then we’ve also talked about hard labor, pulling a lamb, and weak lambs.

Today we’re talking about a “problem” that some folks don’t think is much of a problem at all–bottle babies!

The problem is actually a lack of mothering or “no momma-bonding” as I call it. Bottle babies are the result of the problem. 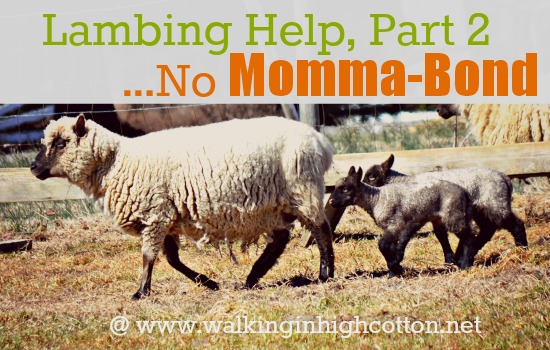 There’s a couple ways you can end up with a bottle lamb.

One, if something happens to the momma. We lost a ewe to a freak accident several years ago. Her lamb was about 3 weeks old and a wood board in the feed shed fell on her in a wind storm. It was unfortunate for a lot of reasons (she was a valuable, experienced ewe) but most unfortunate because her lamb was strongly bonded to her and could not, would not, accept a bottle. She became what’s sometimes called a “bummer” lamb. She would sneak up to other ewes during feeding time and nurse when they couldn’t tell she wasn’t theirs, and she started eating grass and feed early. She survived but she didn’t thrive and ended up as a small meat lamb. 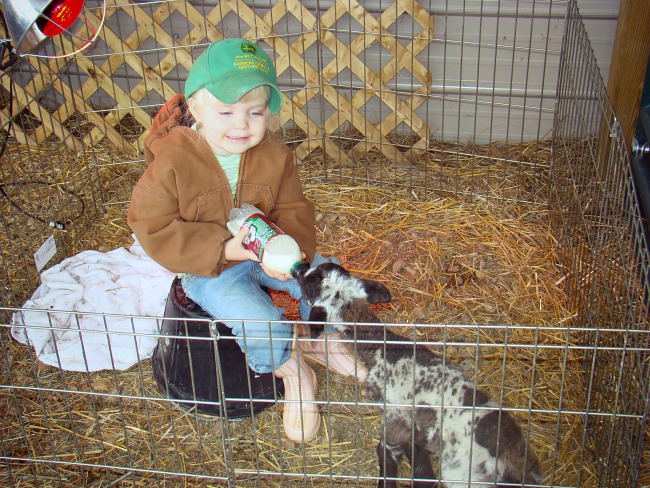 Two, if you deliberately take the baby away from the momma. Some folks do this because it makes the animal bond to humans and they aren’t shy of people and are very friendly and “pet” like.

We don’t do this. This is a working farm and homestead, not a petting zoo. We’re not concerned with the animals being “friendly” or “fun.” We’re concerned with them being healthy, living in a natural and sustainable environment, and honoring God’s creation while we do it. We do not artificially “create” bottle lambs. It doesn’t fit with our “hands off” philosophy, or honor the natural systems God put in place.

We often get requests from folks to buy an unweaned lamb so they can raise it as a bottle-baby. It’s our choice to only sell weaning-age lambs. We just feel that momma is best for baby, and don’t like the idea of intentionally disrupting that. 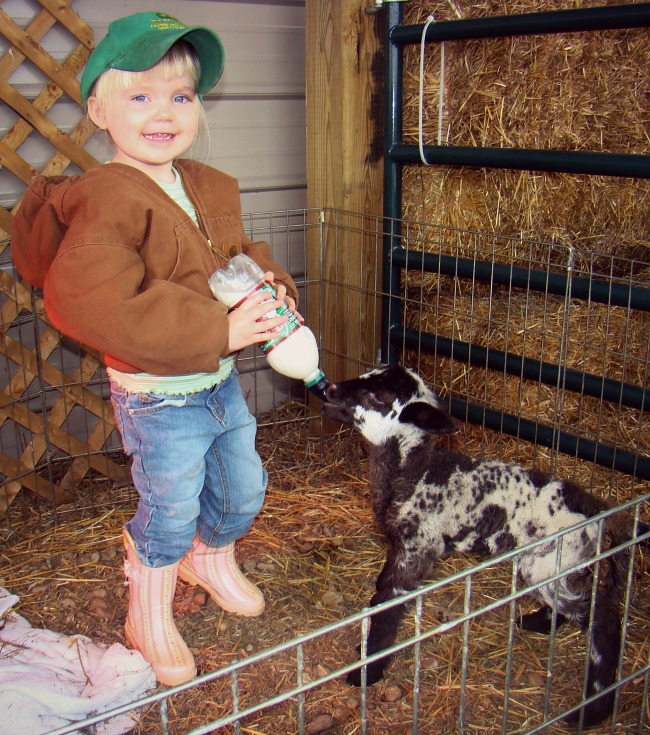 But as you can see from these pictures, we’ve still had our share of bottle lambs!

The third way is when a momma rejects a lamb.

When we were raising more Hog Island sheep and less Clun Forest sheep, we had this happening regularly. A ewe would have a lamb, get up and walk away and leave the little one wet and crying and trying to catch up to her–this was most common with first time mommas. They seem to go through labor and don’t know what they are supposed to do afterwards. Or a ewe would have twins and reject one of them while focusing completely on the other–actually butting one away when it tried to nurse. 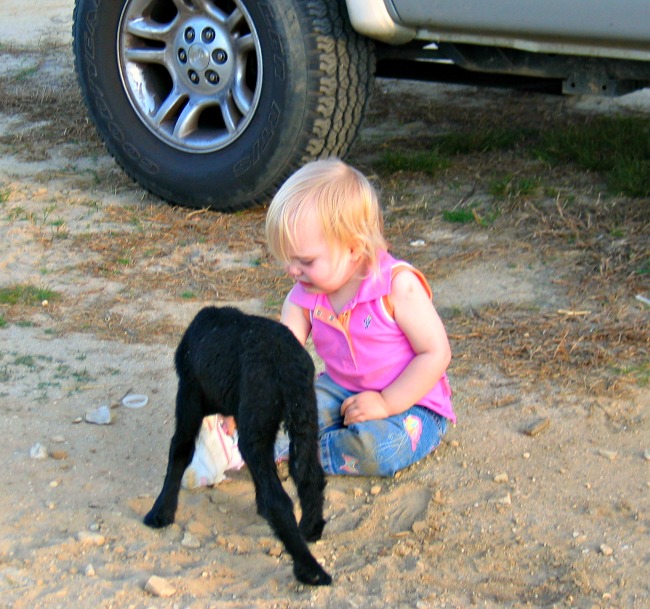 The first thing we do in these cases is pen the momma and babies up together in a lambing jug. Being out in the field with the rest of the flock, other lambs, and all that space, can be distracting–especially for a first-timer. Isolating her with her lambs in a quiet area can help her reorient herself to the job at hand. Especially for someone who “forgets” she has two babies. Putting her in a pen with both of them crying for her with no other mommas around can help kick in her natural instincts.

The next step is to watch for a while and see how things are going. If she gets it together, great. If not, we move to step two.

Step two is to actually hold her and force her to let the little one nurse. This is important for two reasons. One, the lamb gets that first colostrum, which is vital to its well-being. You can use a powdered replacer in an emergency, but it’s not the same quality as straight from the ewe.  And two, sometimes nursing can help the ewe’s mothering instinct kick in. 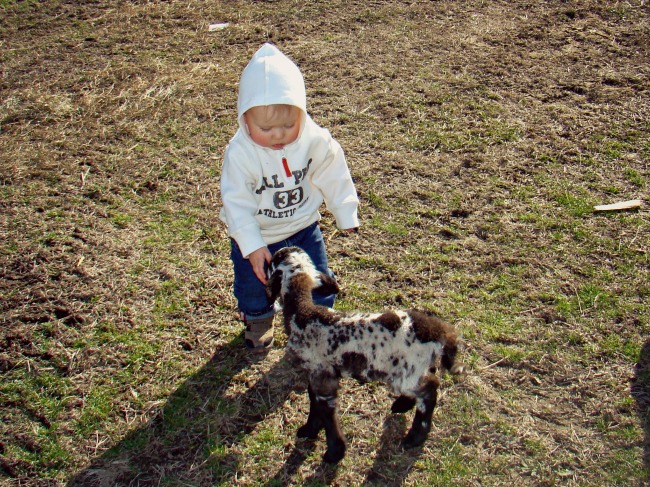 {And this is our Cowboy!}

We once had a ewe that rejected twins. We put her in the jug and it didn’t help. I would go out there and hold her still and the lambs would nurse–when I let go she would actually lay down to keep the lambs from nursing. She was being down-right obstinate. Mr. Fix-It went out there and added panels in the middle of the pen to create a narrow chute in the middle. The ewe had room to stand up, lay down, and move forward and backward, but she couldn’t move side to side. The lambs had room under the panel to move all around her and she couldn’t butt them away.

I would go out there and stand her up and hold her head, and the lambs would skedaddle underneath of her and nurse. When they were done, I would let her go and she would lay down. That night (in February!) we left the window open, and any time we heard the lambs crying we would go out there, force her to stand up, and let them nurse. We did that every 3-4 hours for about three days, and then I walked out there one afternoon and she was standing up munching some hay and they were both nursing. We watched them for two more days before letting them out and the three of them did just fine. 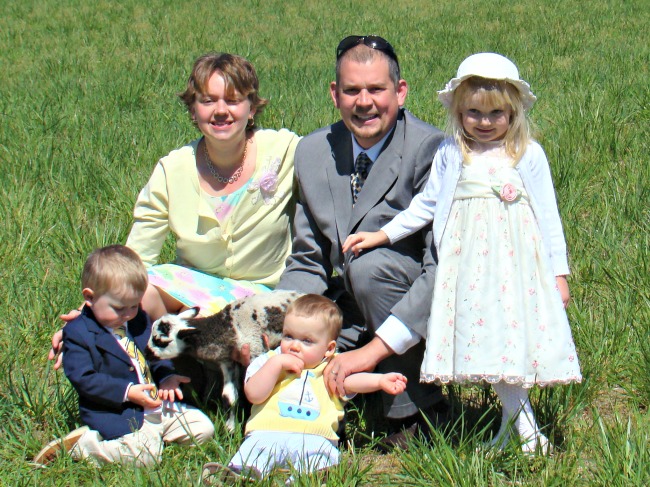 And this is the whole family with one of our Easter bottle lambs several years ago. {Look at my little chunky monkey Speedracer!}

Sometimes even that doesn’t work and you end up with a bottle lamb. That’s a whole adventure in itself, for another post, but I think it’s important from a management perspective to note that bottle babies are the result of a problem–even if they are cute and fun. The only “rejection” we’ve had for a couple years now is a case where I believe the momma knew something was wrong with the lamb that couldn’t be fixed and abandoned him–a weak lamb–and we weren’t able to pull the lamb through either, like Washtub Willie. I didn’t realize it at the time, but I think the momma was on to something I didn’t know. No cases of active rejection of a healthy lamb in several seasons!

We consider that a huge management success!

As I mentioned before, all of these “common problems” are really NOT that common–at least they haven’t been for us. It’s not normal for us to have more than one or two of these “problems” a year–and that’s out of an average of 20+ lambs a season!

Be sure to come back for the end of the Lambing Help series tomorrow, talking about when to call the vet…

And if you’re looking for more specific information, here’s our very favorite sheep books–the ones we keep close by all year long!