We had some predator problems at the duck pen (which doesn’t have any ducks in it right now, but old habits die hard!) a few weeks ago. Our youngest batch of layers is in there at the moment, and something unfriendly joined them over a three night period. We lost several.

About a day later, I came home from work and was greeted in the driveway by the news that there was a chicken on the porch.

Now this is generally not news {sigh}, I have worn out many a broom trying to train those pesky free-ranging chickens to stay off the porch! But it turns out they found her dragging around the pen with a “broken wing” and that’s certainly not normal. 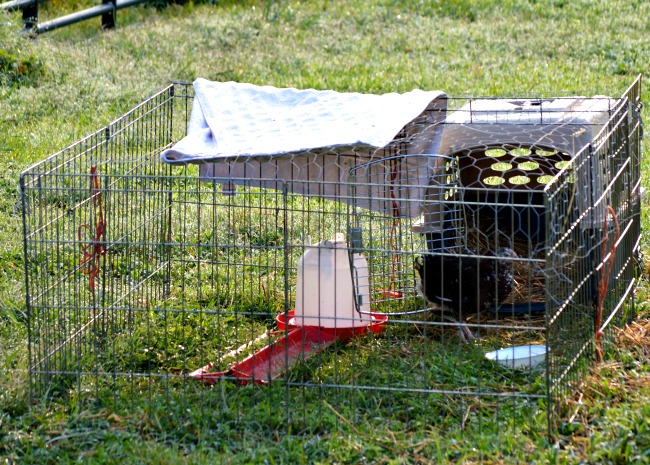 After examining her, she had a lot more than a bad wing going on. Her wing was dislocated at the shoulder and there was inflammation through-out the wing structure. She was also missing about 1/3rd of her feathers from her tail forward, and had a lot of abrasions. I think she might have been injured in the recent attacks and was hiding out in the crowd over there and we didn’t see her at first. This was not a chicken-on-chicken injury. 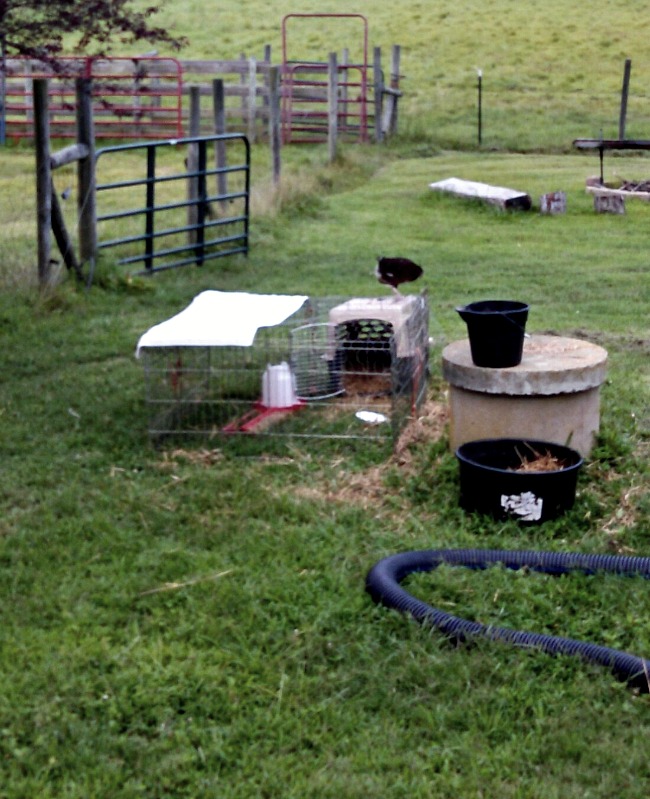 By the way, how do you tell if a chicken has inflammation, etc.? I reached one hand carefully under each wing at the same time and let them just rest on my fingers and palm for a few minutes to feel the difference.  One was normal along all the bones and joints. The other was hot and swollen and 3-4 times as large along each of the underside bones and joints.

But she was awake and aware and kinda feisty, actually. 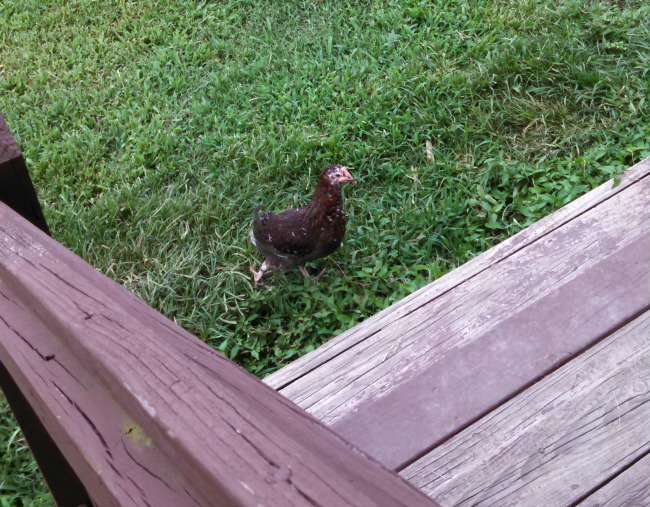 The kiddos had put her in a tub (that black mineral bucket you can see in photo 2 up there) to wait for me. She’d hopped right out and was wandering around the porch when I got home. After looking her over, we bedded her down with some straw in the same tub, and covered it with a towel to keep her quiet. (Chickens don’t see well in the dark, so they don’t get adventurous.) Mr. Fix-It and I talked it over, and decided to just try keeping her quiet until the swelling went down. 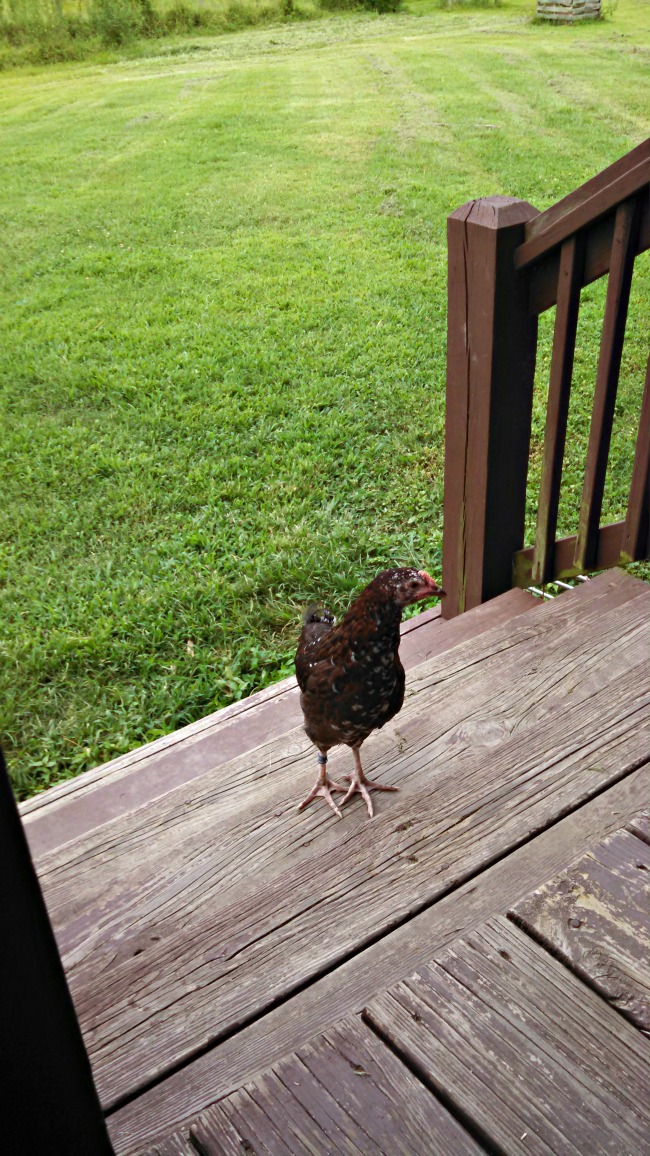 So she lived on the porch in the tub for about 4 days. I let her hop out every evening when I checked on her, and let her wander around on the porch for a few minutes for some exercise, but we tried to keep her quiet and still–and well fed! Once the swelling went down, she was able to tuck the wing back up normally, but couldn’t stretch it out well. We tried to reintroduce her to the other chicks in the duck pen, but they started picking on her immediately. So we pulled her back out and the kiddos (with Ms. Maya’s help!) fixed up her current digs. It’s a dog carrier shoved up against the door of a puppy exercise pen (a $5 yard sale find a few years ago!) with chicken wire tied on top. Clearly meant to be temporary. 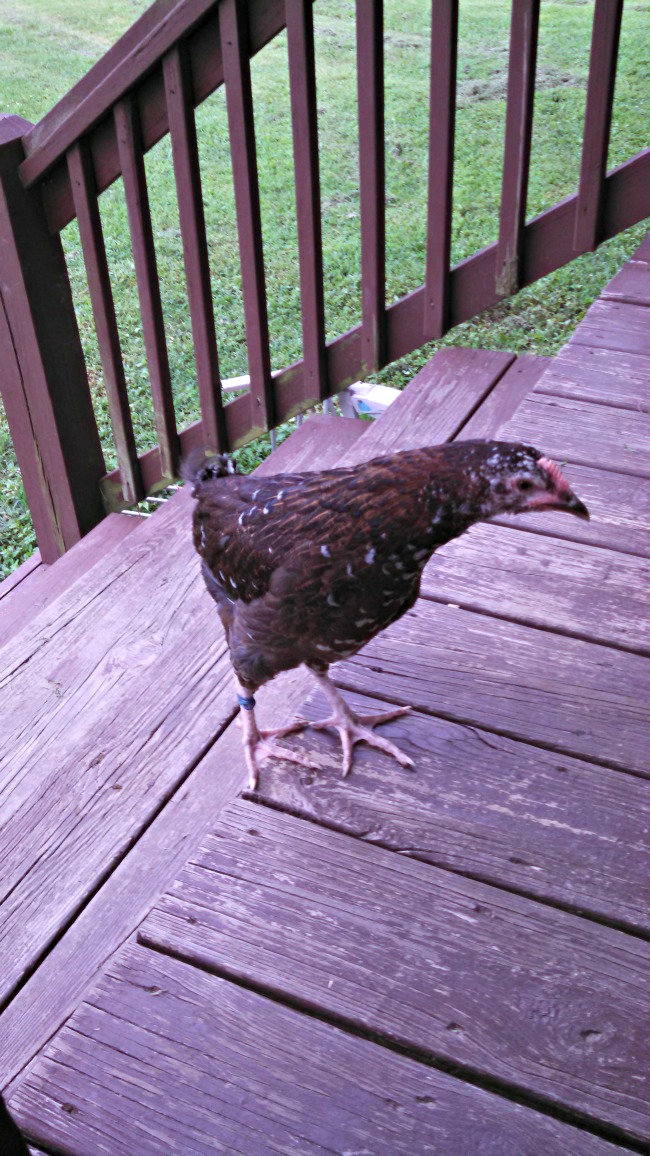 Turns out she  can get out whenever she feels like it.

She seems to just wait until the evening when the other chickens head back to the coop and she’s got the yard to herself. She just squeezes through a little gap between puppy pen and the dog crate and heads out into the big, wide, world of the backyard. 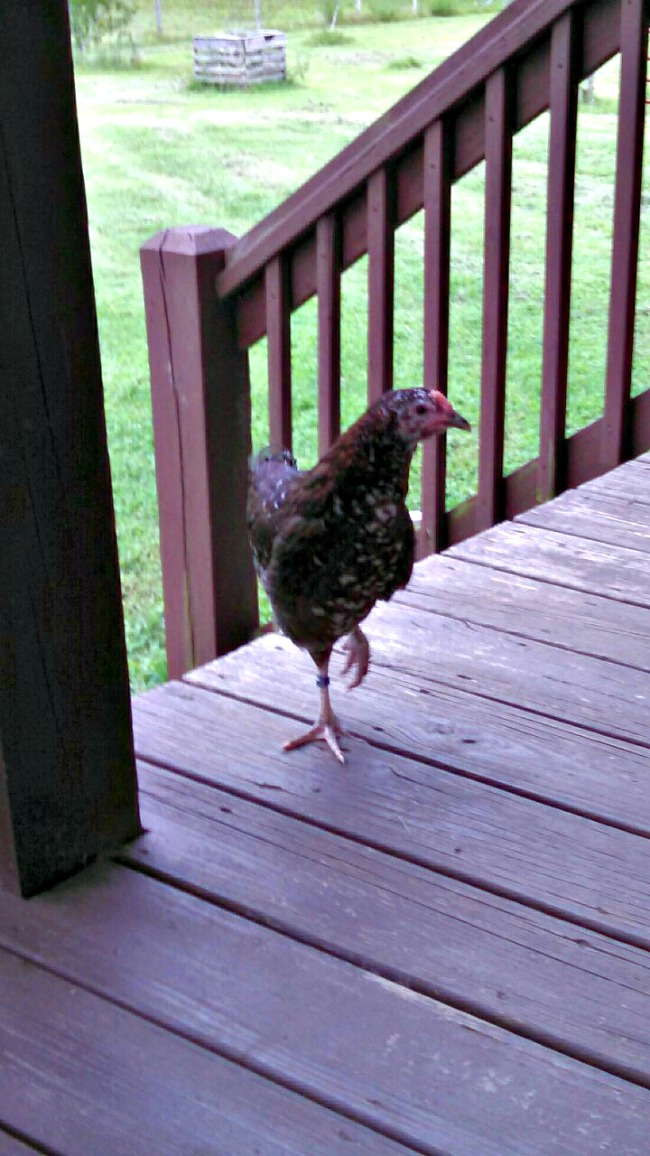 The other night I was out there reading for a few minutes and she came right up to the table I was sitting at–AND HOPPED IN MY LAP! 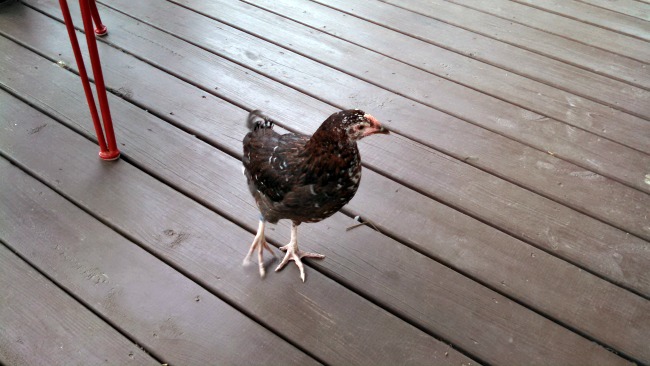 Seriously! I’ve never seen a chicken act like her before. She makes these little chirping coos and walks over and hops right up in my lap. And if she gets tired of sitting there getting petted, she hops up on my shoulder and starts pecking at my earrings.

I’ve started calling her the Pixie (shh…don’t tell Mr. Fix-It I named a chicken!) and she’s certainly the friendliest little feather-wearer we’ve ever had around here. Down right affectionate! 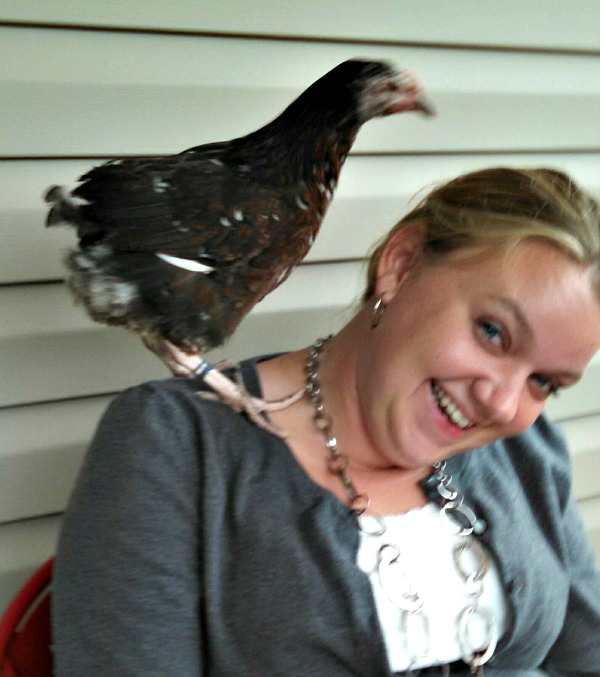 The Ladybug get’s a kick out of it! She took about 20 pictures I had to go back and delete!

I’m not really sure what we’re going to do with her. Her scrapes are all healed up now, although you can see she’s missing a lot of bottom and tail feathers. She can walk, stand, and hop just fine, but she can’t fly. I’ve gotten use to having her chirpy little voice around the porch. (Isn’t that silly?!)

We processed our last batch of meat chickens for the summer over the weekend and we’ve got maintenance on all the chicken “structures” {smile} coming up. I’m not sure if we’ll be able to re-integrate her or not. Every day is something new around here, huh?

How are things at your home place? Wrapping up the summer yet?