And sometimes we just need a dose of CRAZY to make our own life look normal again. {grin}

The munchkins had a rough day at school on Tuesday, so I decided that as soon as I got home from work, we would all suit up, spray down, and head out to our little draining pond swimming hole for some fresh air. (Remember that new little bundle of high octane we brought home in December? He LOVES to swim!) The kiddos asked if we could go through the woods, and I agreed, since everyone was officially drowning in bug spray.

We took two steps off the farm path and the entire forest EXPLODED!

The dogs ran straight into a flock of turkeys!

By the way, a flock of panicked turkeys taking off sounds kinda like the thunder of cannons. Add some hysterical puppy barking, leaves and feathers flying, and kids hollering…my heart may have stopped for a good minute and a half. But that wasn’t the end… 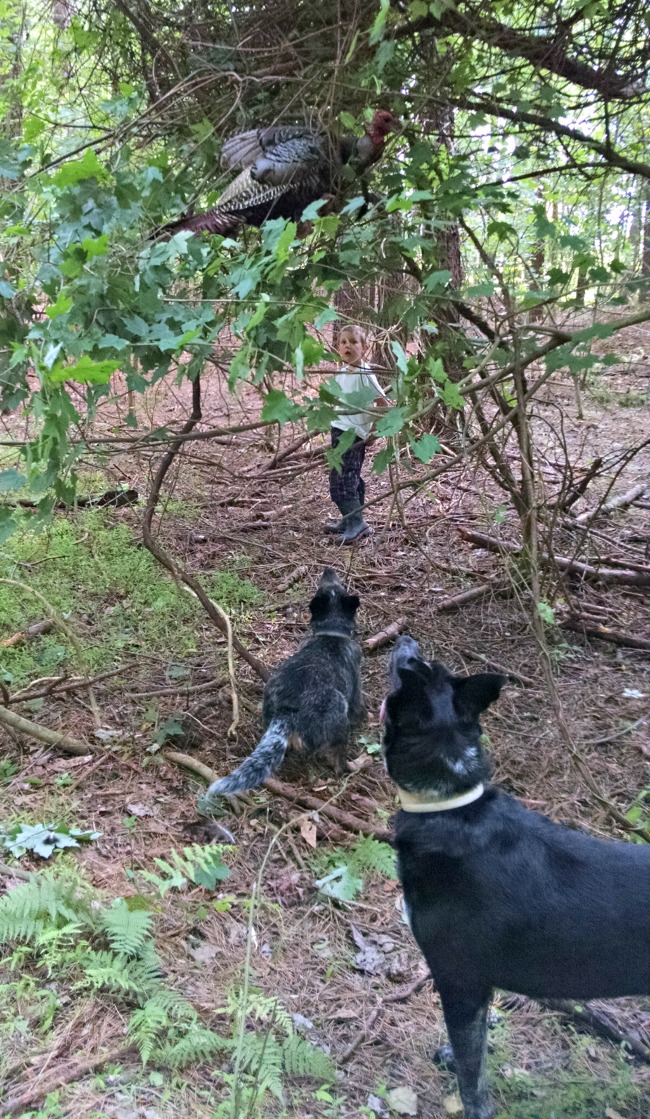 One of the gobblers had actually gotten STUCK in a tree. A very short tree. Just out of reach….

Did I mention our little cow dog pup can jump 5 foot in the air from a standstill? Coal managed to rip about half his tail feathers out before knocking him completely loose. (I was really hoping he would stay put until I got the dogs’ leashed!)

Then the chase was on!

Farm dogs racing after him, occasionally running him over and pinning him down and ripping more feathers out…

The Ladybug and the Cowboy galloping after them, whooping and hollering like a bunch of wild Indians, leaping logs, ripping through brambles…

And me trying to keep up while not losing Speedracer, who kept falling rather than clearing the logs and ditches… 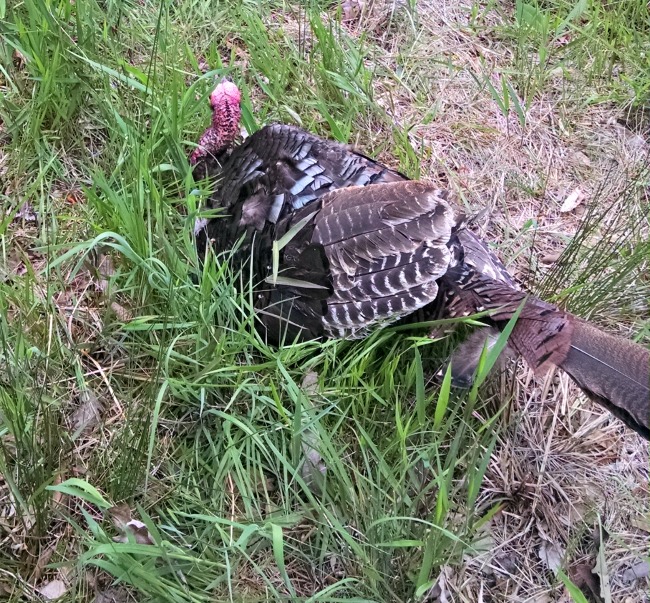 After about 8 lung-bursting minutes, Mr. Gobbler gave up in the open grass of the gas line. That was a pretty good strategy on his part. I was able to catch up and get the dogs back under control. The crew set up a little Ceasear Milan-esque perimeter and I took a careful look at the bird while the dogs cooled down in a nearby mud puddle. 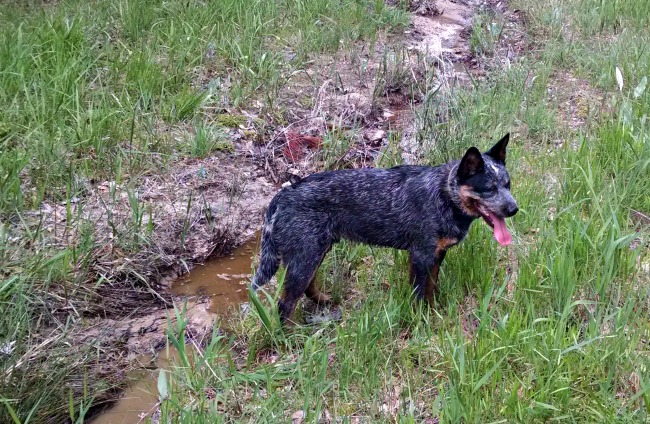 Besides being scared silly and missing most of his breast feathers, he seemed ok. I didn’t want to mess with him too much because he was already stressed out, plus those claws are no joke if he panicked. The kiddos wanted to get in close, but I kept them back for the same reason.

(Speedracer looks closer in this picture than he actually is because I was kneeling down, holding the dog. They weren’t in touching distance.) 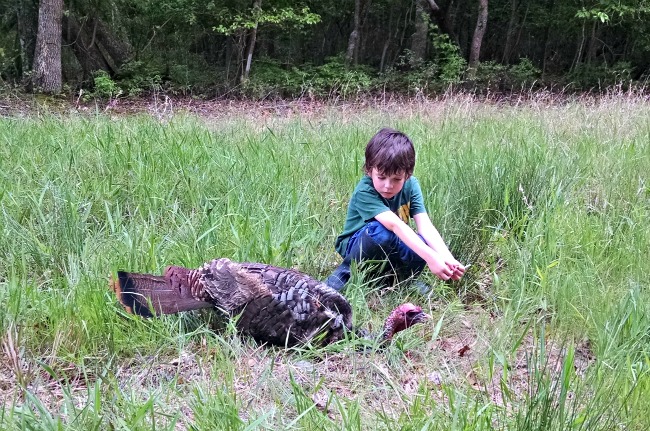 Ok, whew, so we drag the dogs off and head back toward the pond. We had covered a lot of space in that 8 minutes, so the dogs eventually forgot about the turkey and were moving forward again. We were almost to the pond, I mean it was right there, when I reach up to brush a bush back–

And it’s not a bush–it’s a HUGE BLACK SNAKE! Right there in my face! We were eye-to-eye for a minute. 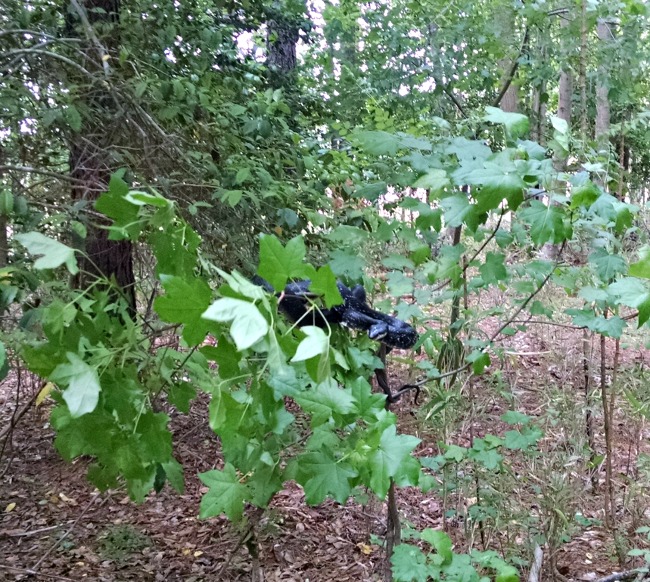 I nearly gave up the ghost right there, friends.

Mr. Fix-It always says the problem with snakes is not that they’re scary in and of themselves, but that they always surprise you.

The Ladybug and Speedracer both screamed (possibly related to me almost knocking them off the hill in my hurry to back everyone up!) and the Cowboy comes racing back to check it out. By the time I had caught my breath and determined that we were not facing a African pit viper or King Cobra or man-eating Anaconda, but merely an equally startled rat snake, the Cowboy was poking him with a stick and the dogs were starting to sniff around to figure out what so interesting. 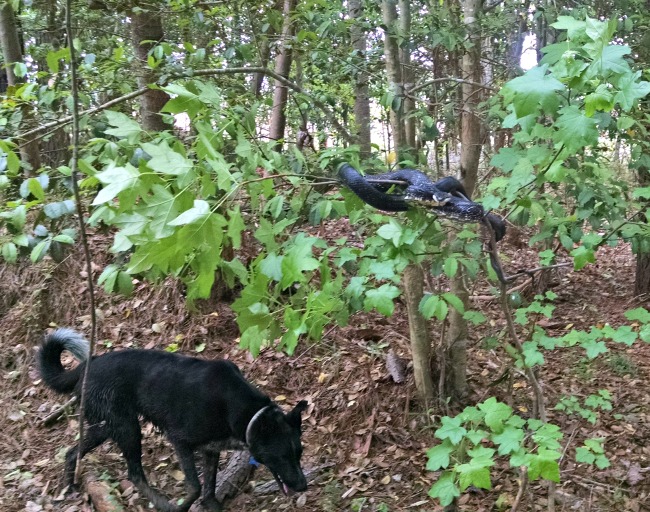 He was easily in reach of Coal’s spring-loaded paws, and seemed more incline to hiss than to vacate, so I rather sharply gathered up the troops and quit the woods for the day.

We headed straight OUT of the woods and back onto the path, where it started raining on us the rest of the way home. We got home from the most exhausting walk I have had since we went hiking and camping for the weekend, and I looked at the clock to see that we’d only been gone 37 minutes.

And that’s how we relax around here after a stressful day at work/school! {smile}

As I write this, I’m reminded how much I love writing! How I’ve missed sharing all our daily adventures! (Of how blogging can easily turn into pageviews and printables and manuals and miss the very heart of life, if a blogger is not careful!)

So feel free to sign up for our newsletter (we’ve got the May monthly issue coming out next week, packed with gardening goodies!) and follow the daily adventures in real time on FaceBook and Instagram (bare with me, I’m late to the Instagram party and still figuring it out!). There’s more fun coming!