For the 4th of July we went camping (and got rained out) and then spend the whole day Sunday on some farm upkeep (and catch up!). The WHOLE day. Meaning, I walked the dogs at 5:30 am, then went straight in to cook breakfast, we got dressed, and headed out. It was sopping wet, but we managed to get a lot done, before the clouds rolled in at 5:30 pm. (If you’re thinking about homesteading, might I recommend Muck Boots. There’s pretty much no other way to survive, trust me!)

First up, we had to fix the new chicken hotel. {smile} It’s an old greenhouse a friend was scraping, that Mr. Fix-It magicked into a lovely chicken house. The plastic rolls down in the winter to keep them toasty warm, and then up in the summer for ventilation. Unfortunately it suffered not one, not two, but a series of storms lately. And when the chickens flew out, the cows moved in. {sigh} 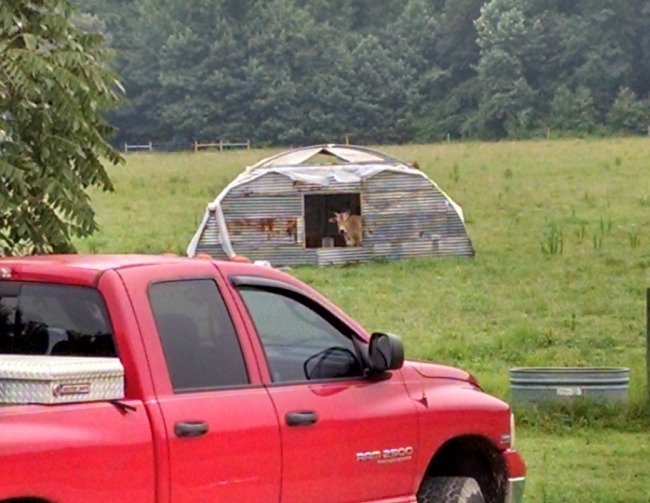 So we got right to work on getting this situation in hand. First we moved the house to a nice clean spot to work on it. It’s got a tow strap on the nesting box end so we can move it around the field weekly, or as needed. Weekly works right now for our 15 hens.Then we pulled all the ripped plastic off and folded up what could be salvaged in case we need it later for something else (like camping ground cloths). 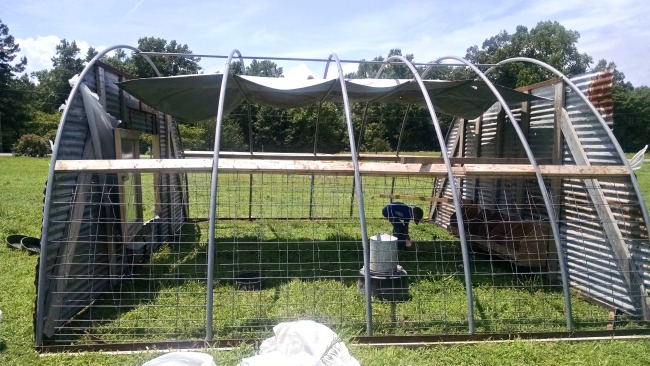 The tarp on the top is for shade. It goes underneath the plastic on the inside structure of the house so it’s easy to move as needed and not exposed to the elements as much (it’s not an expensive tarp). It really works well. On a hot day, with the sides rolled up, you can step inside and the house is noticeably cooler than the field outside. Not cool, but definitely cool-er.

This picture below sums up a lot of our day. Poor Speedracer is dripping sweat from the top of his head, and wet to the knees from the wet grass at the bottom. He doesn’t like to wear his muck boots because “their hard to run in” so he always has an old pair of sneakers around to wear for chores. 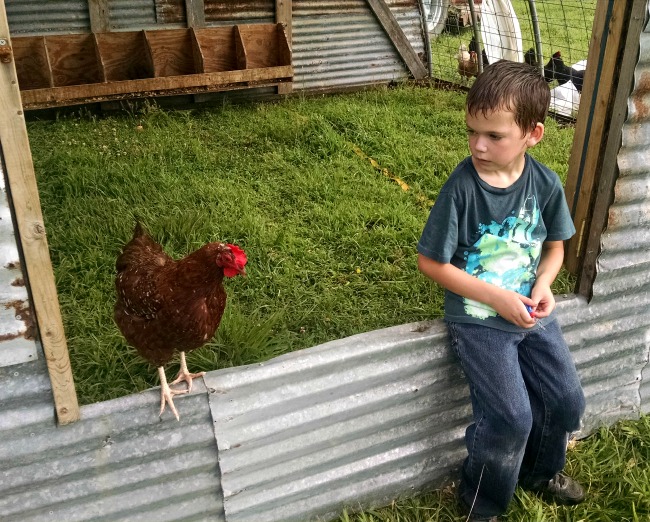 Then we had to put fresh plastic over the top. Be still my heart… 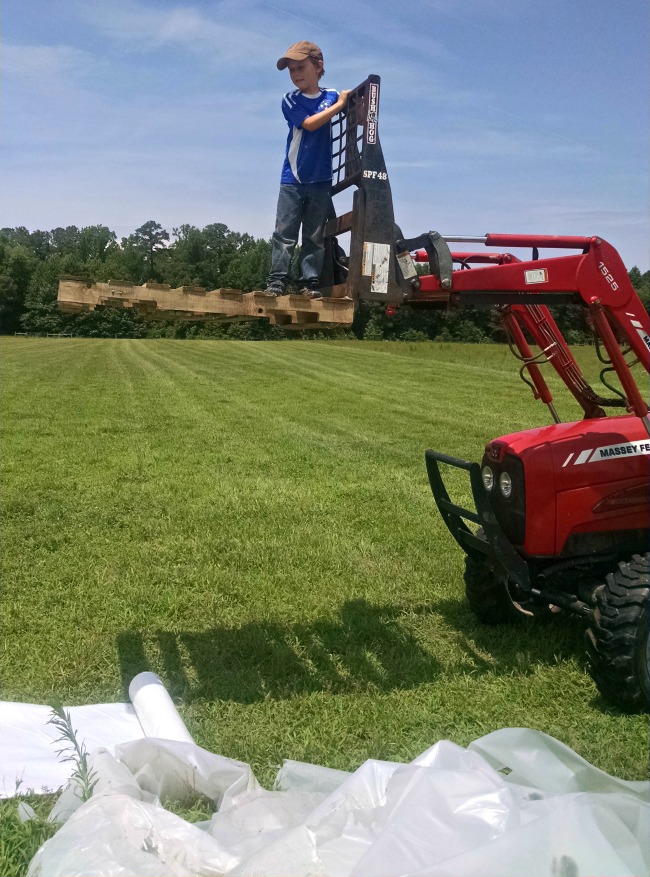 I’ve written before about having to overcome the mother-fear when it comes to parenting. Farming takes it to a whole new level, friends. Our kiddos are growing up slow, but brave. Even if they eventually chicken out, they try things I would have walked away from without a word. I just have to grit my teeth and walk away, and remember that their father loves them just as much as I do. {smile} The Cowboy did call it quits before he completely finished, that was about as high as he could stomach and that only reached half way up the curve. He could do the straight up ends, but he couldn’t take the curve. 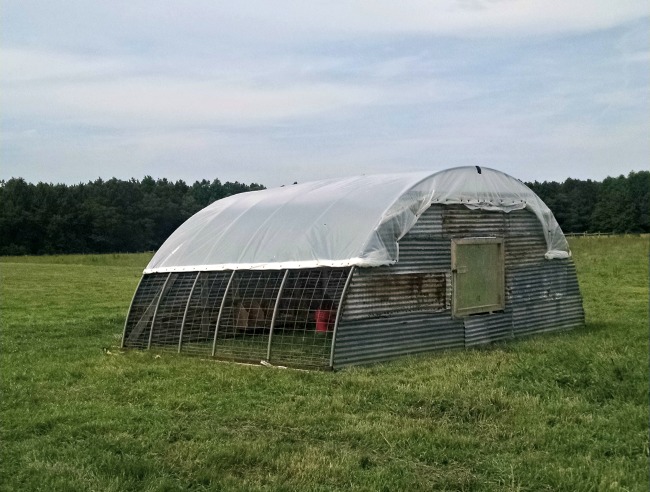 Eventually we got it wrapped tight again. You can see that the lower half of the sides are hog panels. Turns out some of the chickens can fly through the largest holes at the top edge. So we layered some woven wire sheep fencing pieces on the inside to put an end to that. (Chicken wire would have worked fine too, Mr. Fix-It just hates working with chicken wire.) 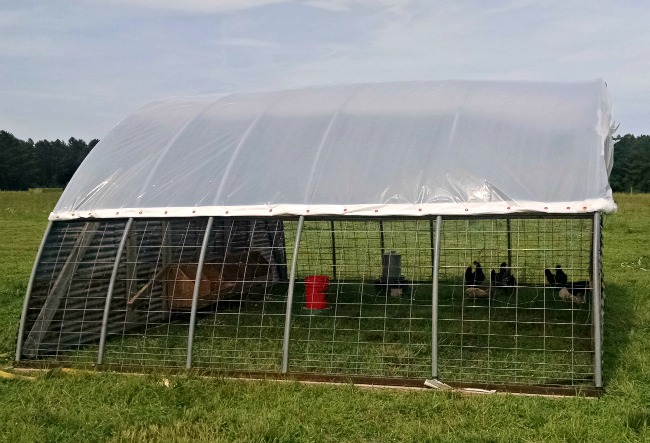 We have 5 nesting boxes in there. All 15 of them only use two. Plus someone lays under the boxes. And someone has started laying their eggs on the top of the feeder (the red and green bucket). Chickens are ridiculous.

(You can see a list of our basic, and favorite, chicken supplies here…5 Basic Chicken Supplies) 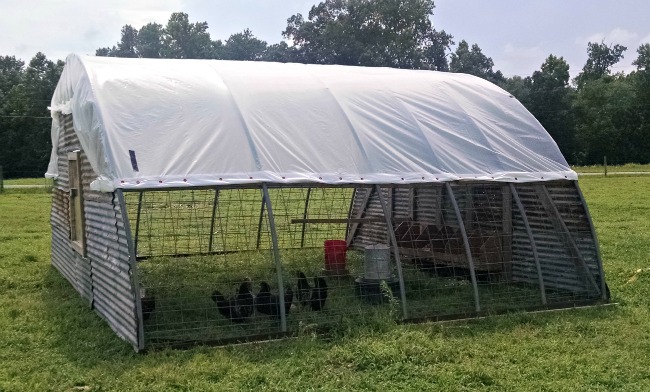 The rain held off for us to tackle several other jobs too, which I’ll be sharing in this week. And there’s always mowing to be done. The yard, the farm paths, the alleys, and the fields that the animals haven’t gotten to yet.

Have you been busy at your homeplace this summer?