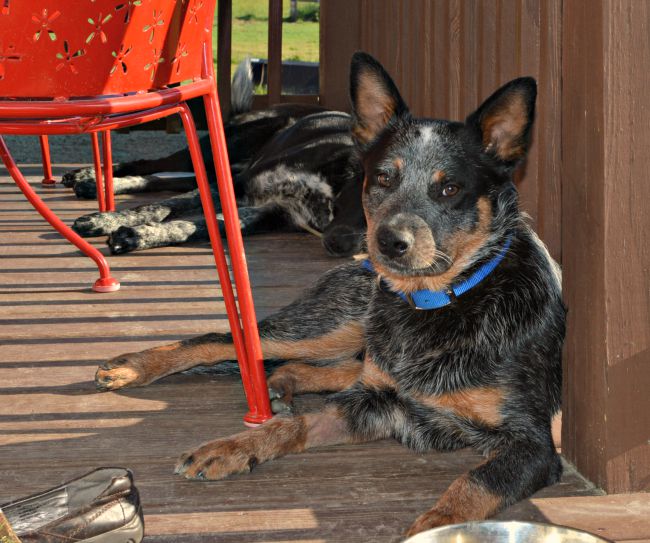 Our Christmas puppy is growing up fast! He’s 8, going on 9 months old now. He got neutered a few weeks ago, recovered fine, and spends a lot of time out and around town with me. People are always very curious about him, because the breed is not that common (although it’s becoming more so!). For some reason I get asked a lot if he’s a “mini German Shepherd.” Honestly, I don’t even think there is such a thing, but the answer is no. {smile} 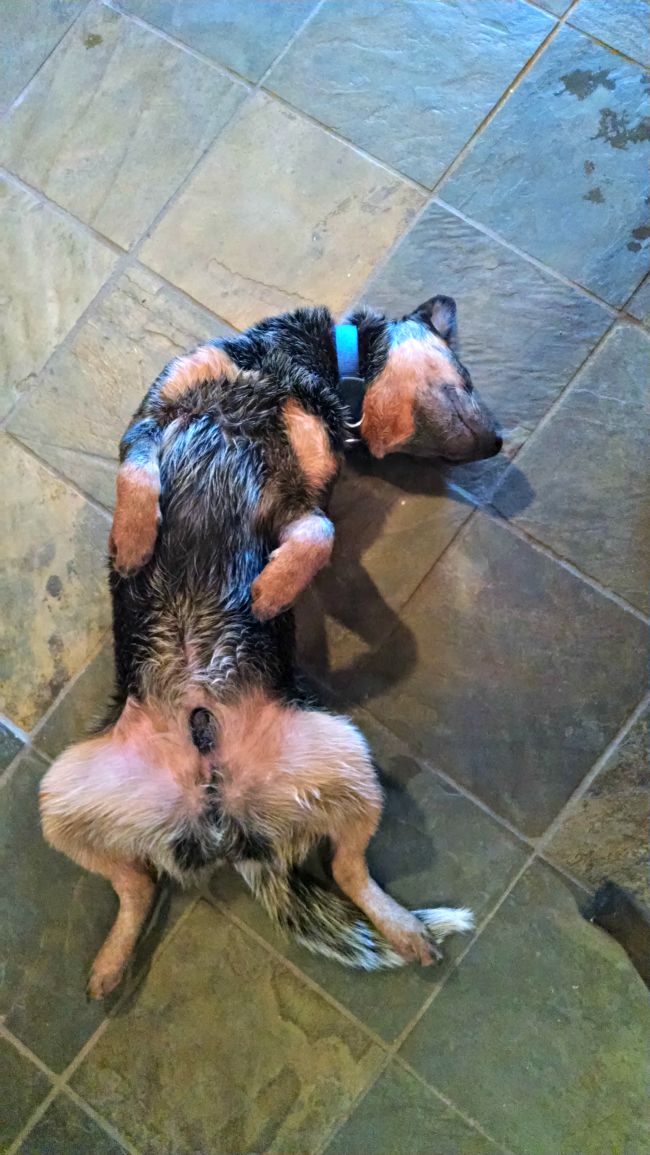 He’s an Australian Cattle Dog. Also know as Heelers, or a Blue Heeler (or Red Heeler, but he’s not red). And he’s a purebred, so this is not a random guess at his parentage. He’s a herding breed that actually originated in Australia. (Australian Shepherds did not, isn’t that funny?) They’re called “heelers” because they herd by driving at the animal’s heel, rather than using the stare-down, face-to-face methods of a Border Collie (which is called “eye”). They tend to be considered a harder, more aggressive breed than Border Collies, but that is highly variable dependent on training and individual personalities. 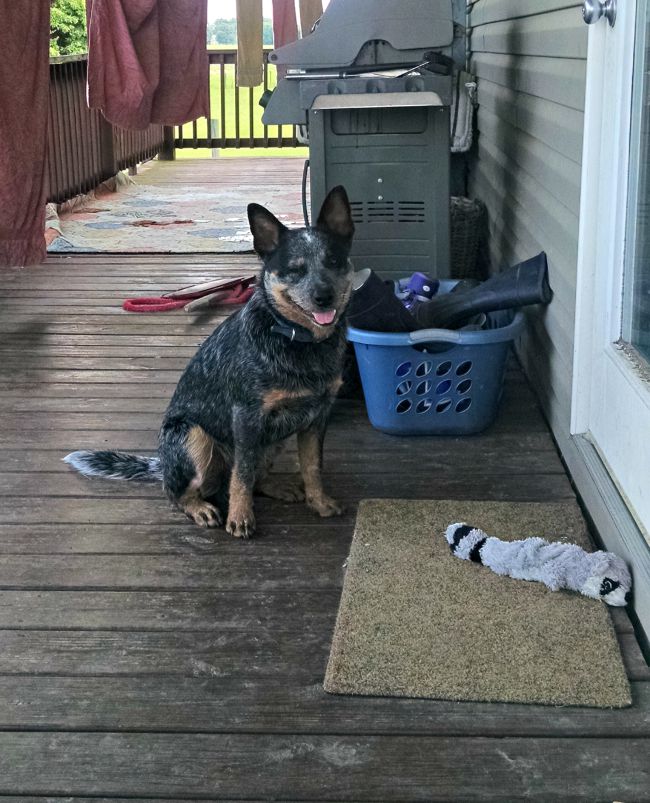 Herding dogs are very smart. Super-smart, in the dog world. Top of the chain of working dogs. It’s one of the reasons you see them in so many commercials, movies, etc. It’s also one reason why it can be so challenging to own them and so many of them end up in shelters. I mean, SO MANY. They’re a handful and their positive traits can turn into negatives if they’re not handled correctly.

Mr. Fix-It gives me the raised eyebrows, which mean “I told you so” and “Your dog, your mess” all in one, then leaves for work. Thank goodness Coal came right away on his whistle! (Right back through the maze he went to get there!) He called off so beautifully I actually had to swallow being mad and give him a treat for coming right to me and sitting nicely on the porch.”‬

It’s a constant adventure! He fits right in around here. 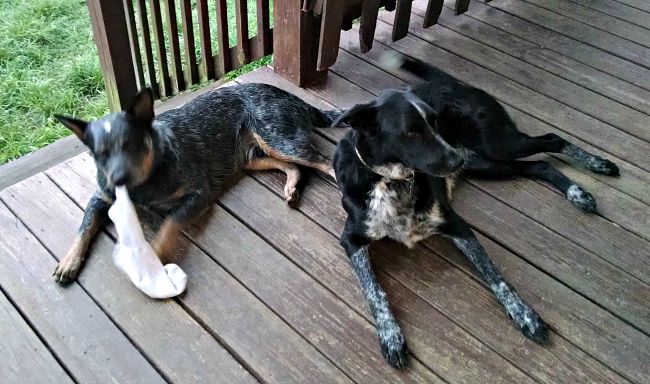 He also pushes boundaries. A lot.

When I have coffee in the morning, he hops up in the chair next to me. Seemed cute until I caught him actually lounging on the table when I wasn’t out there one day. Um, no. 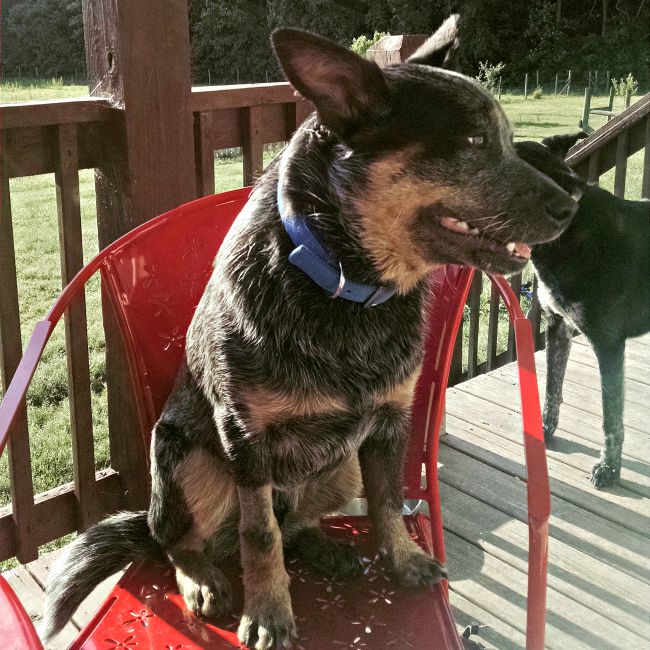 When I’m in the kitchen, he hops up in the extra chair too. Ok, that quit being cute when he used it as a step to jump on the counter and knocked over a bunch of glasses by the kitchen sink. Um, no. 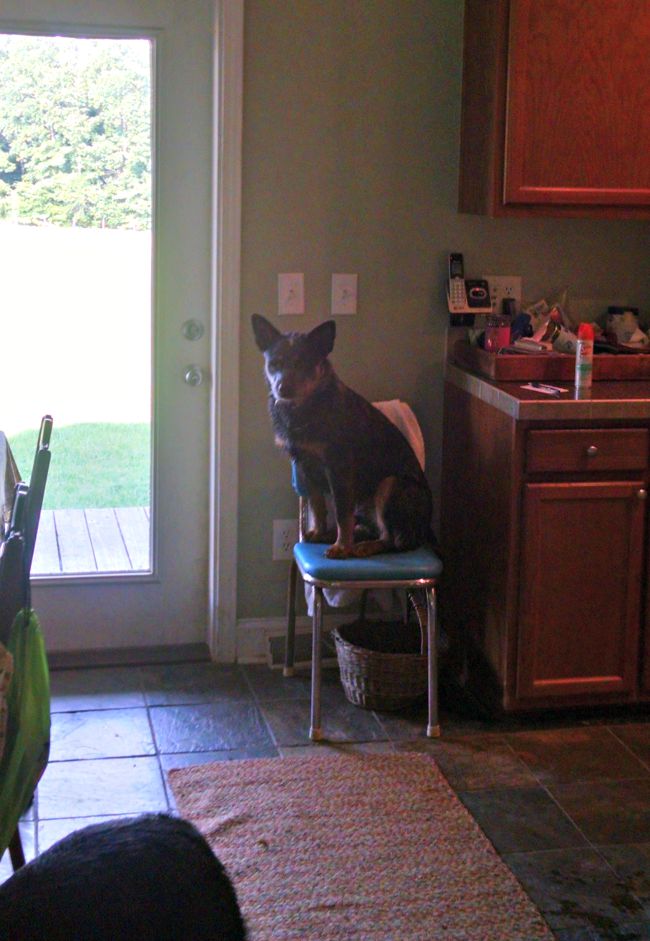 As an itty-bitty puppy he hated water, and would go a 100 yards out of the way to avoid a puddle. But he came around and eventually starting swimming and now he just downright loves water. It’s a lot of fun. Except when he decides he can’t even drink water without a full-blown bath. Or when he decides to join you in the bath. Ugh! Now we can’t keep him out of the water. Even when it’s muddy, or scummy and filled with mosquitoes! 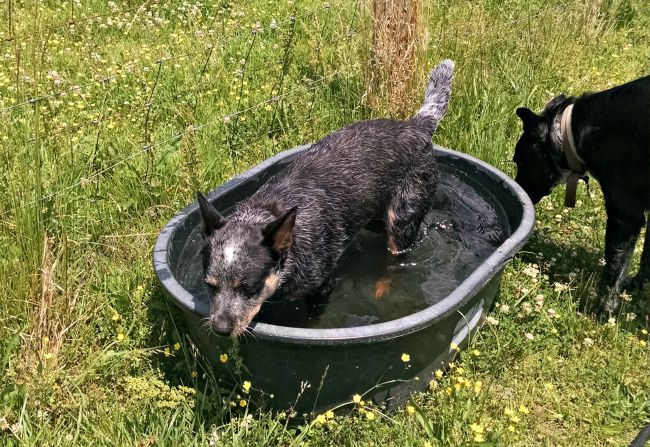 Oh yes, and cattle dogs are stubborn! STUBBORN! Here’s how his mind works…

No jumping, Coal! Yes. NO. Yes. NO. Maybe? NO. Are you sure? NO. I don’t think you meant that. NO. How about just when you come home from work? NO. But today you drove the car, not the truck, so how about today? NO. But today you’re wearing boots, so that’s different. NO. But I love you! NO. What if I missed you extra today? NO. How about today, since you’re not carrying groceries? NO… 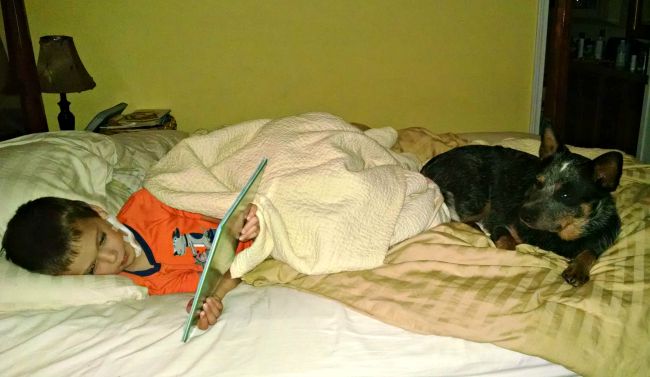 Oh yeah, and they are high energy. We’re familiar with that because so are Pointers and most working breeds, but people often bring them home and can’t keep up with them. I walk the dogs off-leash for 30-40 minutes every morning and about 40 minutes to an hour every evening when I get home from work. The kiddos also walk them every morning and afternoon when they are home, or I come home and walk them for 30 minutes at lunch during the school year. And off-leash means the 5+ miles we walk is double or triple for them galloping around us. And he still has time to pester Penny to death and they wrestle and play for an hour or more a day.

Plus play time with me. I take him swimming and hiking and camping, and use the woods as our own personal agility course. Oh, and training. Cattle dogs are great trick dogs because they love to learn–they just don’t like to repeat something after they’ve learned it! {smile} 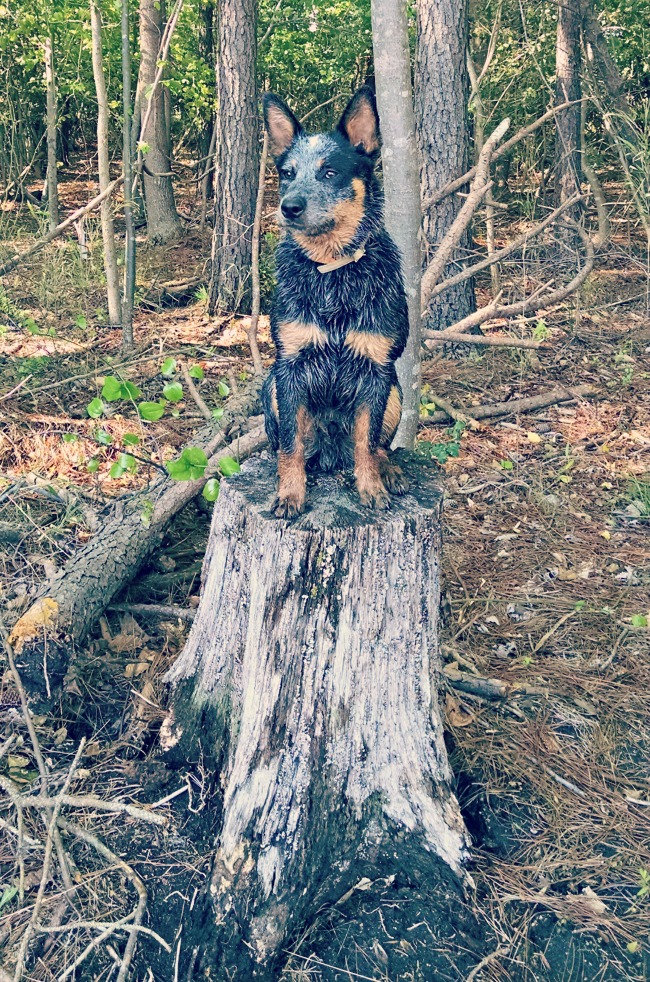 All of that so that when we sit down in the evening, he sits down with us and relaxes. 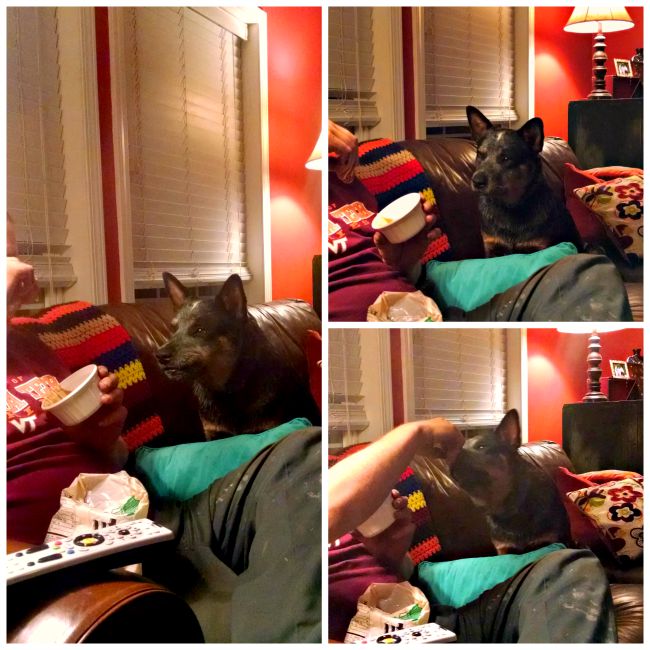 Why deal with all this?

Well, first of all, most of this is standard puppy-ness. Yes, cattle dogs take it to the nth degree, but if you’re shaking your head at any of this, you don’t want a puppy! Any puppy. This is what raising puppies is! (Much like raising kids, but it only last for 18 months if you don’t mess it up!) So save everyone the heartache and get a cat. 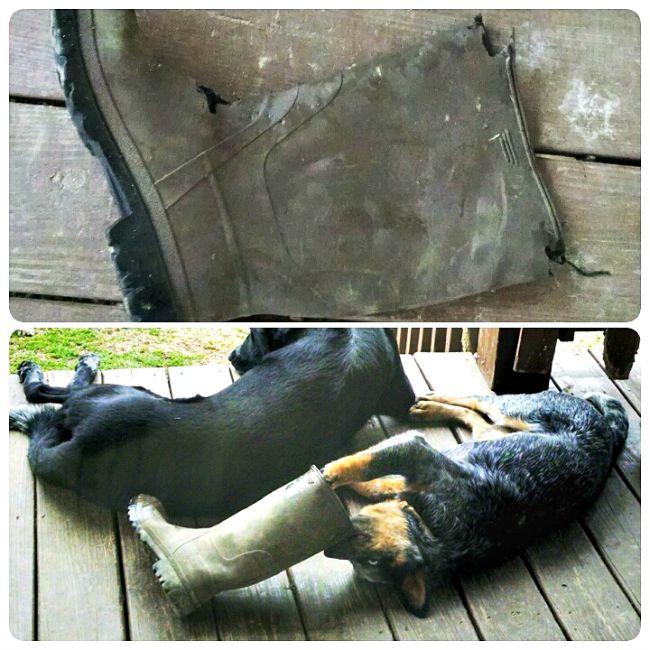 And second, because it’s fun! I mean, he’ll jump up and sit with me for a morning cup of coffee, how much more can you ask for in a companion?

Cattle dogs are bonders. We’ve spent a lot of time to socialize him properly because they’re known for being anti-social and over-protective of “their” human. Our family is his pack and he is attached. Tightly. He’s friendly, but there’s an edge to his personality. Penny loves everyone, especially children! Coal is curious, but once he’s sniffed you, if you’re not his pack, he’s done. You can’t win him over with treats (believe me, people try).

Much like our Pointer, he’s is not a yard dog. He’s either working, or with his people. There’s no random lounging in the sunshine. He’s either working (whatever that looks like for him) or napping at your feet ready for whenever he has to go back to work. Or sleeping. {smile} Sometimes he sleeps hard after all that running around. Usually on his back. In the middle of the kitchen floor. 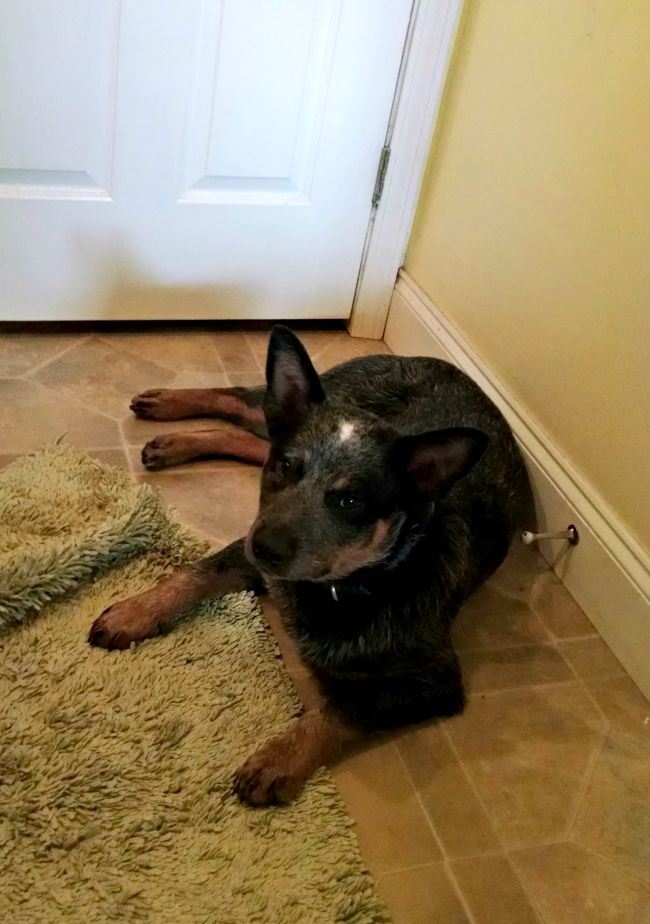 It’s important to pick the right dog when you’re looking at a companion for the next 15 years. One that can be very expensive if anything goes wrong! (Coal already had his first trip to the ER Vet.) If you’re a couch potato, you want a couch potato! If you know you lack consistency and self-discipline, you need a soft-personality dog that’s not going to constantly test your authority. If you want a family dog, choose wisely!

And know that if you choose a cattle dog, you’ll never have the bathroom to yourself again. Ever.

To see some other Life with Coal the Cattle Dog posts…

Have Dog, Will Travel

What pets do you have? Why did you choose them?