Most of our Christmas/New Year’s holiday this year was kinda drizzly and mucky, so Mr. Fix-It and I decided to take the crew to the Mariners’ Museum one of those last dreary, stir-crazy days. It’s a museum and park with trails and outdoor displays as well, but we stayed inside. 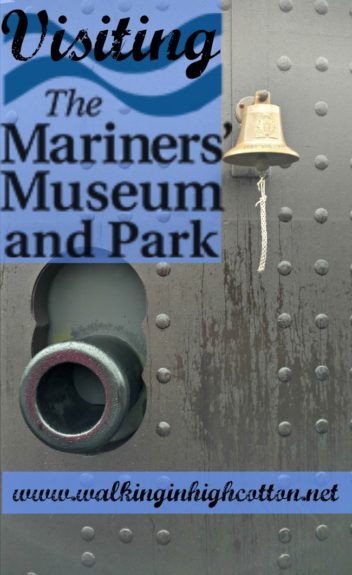 The first thing I’ll say (since the majority of my readers are frugally-minded) is that I thought it was a little pricey, and I really think the 3D movie tickets should have been included, or at least discounted with the ticket price. Especially since a few of the exhibits were closed for remodeling when we went. As a family of 5, we were very close to the Family Membership being a better deal, but the outside Park is free and I don’t imagine us going to the inside Museum more than once a year (unlike the Virginia Living Museum, which we visit every couple of months!).

However; I thought the museum was really well done and they do offer discounts and homeschooling days throughout the year, so I would definitely watch for those deals. 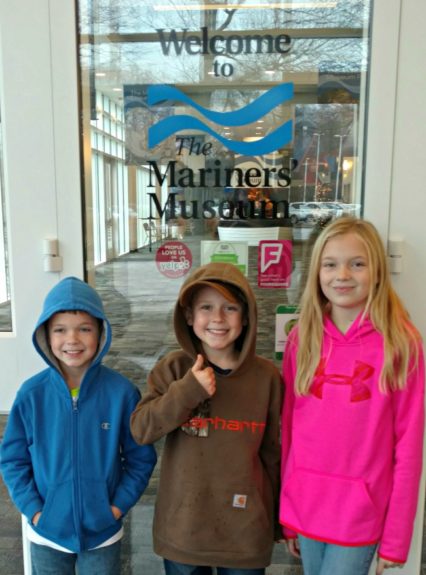 We were able to go using a Christmas gift, and then go to dinner together with Christmas gift cards–which was extra fun. So I would highly recommend the idea of gifting admission or a membership to a young family or homeschooling family. And they do offer discounts for under 12, and free under 3 if you have lots of littles.

We spent 4+ hours at the museum and could have been there longer. So I think you could easily make a whole day of it, if the weather was nice and you could enjoy some free-run time outside on the Trails. And that was with two of their exhibits closed for re-design. 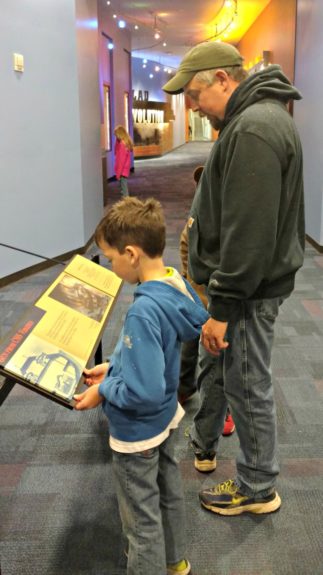 If you’re a history buff (like our whole family is) you’ll enjoy the Mariners’ Museum. Although it carries a couple different exhibit storylines, it’s organized along pretty clear historic timelines and does a great job showing progressive development in maritime technology. 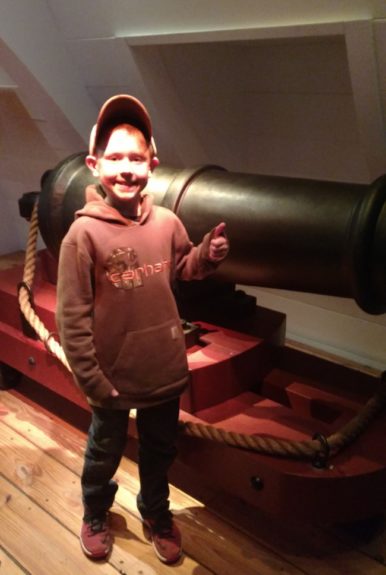 It also does a great job having a very hands-on feel to the exhibits. You walk into the exhibits through low doors and get a feel for the size, scope, and design on different ships. The size of windows, the low ceilings and sloped walls, the cramped space between equipment, the replica canons… 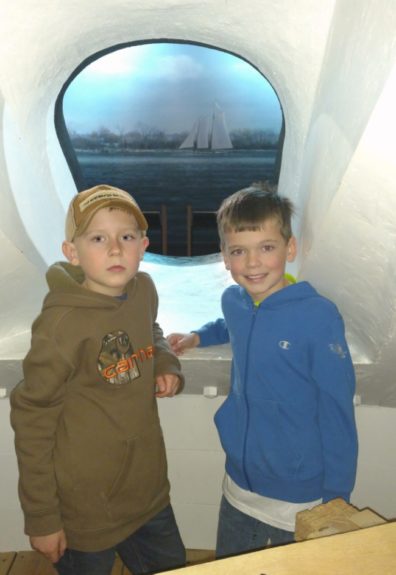 There’s an extensive exhibit about the Civil War Ironclads, the Monitor and the Merrimack/Virginia, which besides being Virginia history is also detailed Hampton Roads history. So driving home we were able to drive past the locations and show the kiddos where the battle actually took place.

We were able to spend a lot of time talking about historic conservation, preservation, and restoration, with all the details about locating and recovering the Monitor. They also had a detailed section of the exhibit about how the engines fit together and worked, which Mr. Fix-It enjoyed walking through with the crew. 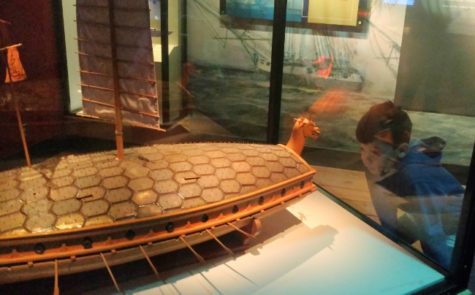 The Age of Exploration section was my favorite part. It walked through naval history including the Vikings, the Chinese traders, the Spanish Conquistadors, the Portuguese interaction with Japan and Asia, the European Crusades, and then an extensive section on cartography and navigation. Speedracer surprised me by being very interested in the mapping and navigation section–apparently they covered Jaques Cartier a little bit in history this year and it peaked his curiosity. 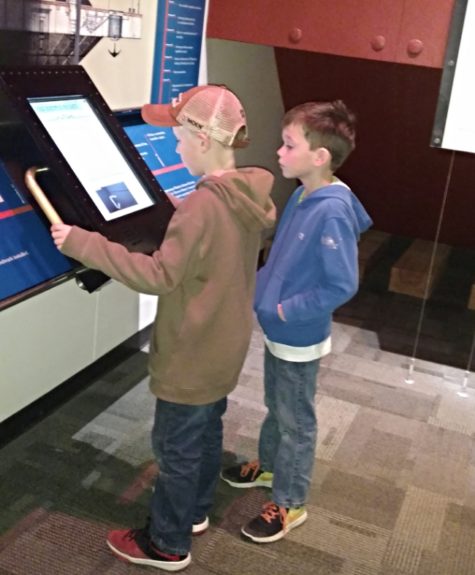 The Cowboy’s favorite party, by far, was all of the hands-on technology. He’s big into computers, technology, and has even started some Coding this year in school. I thought the Museum did a great job with interactive technology.

They had a timeline (see above) where you moved the screen along and there was a 1-2 minute video on each event.

There was a design-your-own warship program where you got to pick ship design options (what type of armor cladding, what type of guns, what type of engines, etc.) and then your ship was run through tests for speed, buoyancy, accuracy, and more.

There were models where you pushed buttons on the display graphic and it highlighted the section of the ship on the model and told you about it.

There were light up boards where you could design your own convoy of different ship types.

They could touch tools, try to pick up ropes and cannonballs, feel sailcloth, lift hatches… 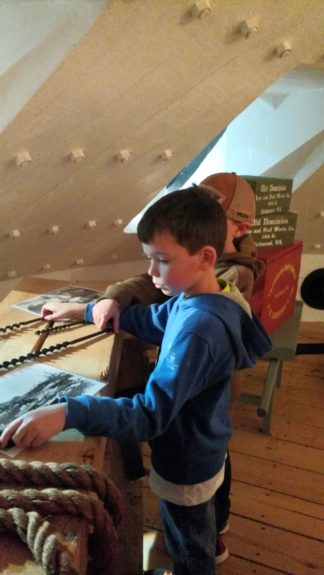 The Ladybug’s favorite exhibit was the new Polynesian Voyagers section. It was a small, temporary exhibit, but I believe it was spurred on, in part, by the new Disney movie, Moana. I also found it interesting after having read James Michener’s Hawaii last year. There was a model of a Polynesian waka (ship or “voyaging canoe”) and some videos about the recent rejuvenation of historic navigational skills in Hawaii. We found some more info on YouTube when we came home–there’s a group actually sailing a waka around the world right now and posting a lot of educational and experiential videos.

There was also an extensive walk-through exhibit on American naval technology called Defending the Seas, which the boys enjoyed after all their documentaries on WWI and WWII. They could walk through mock-up squad rooms from an aircraft carrier and the cock-pit of a submarine. 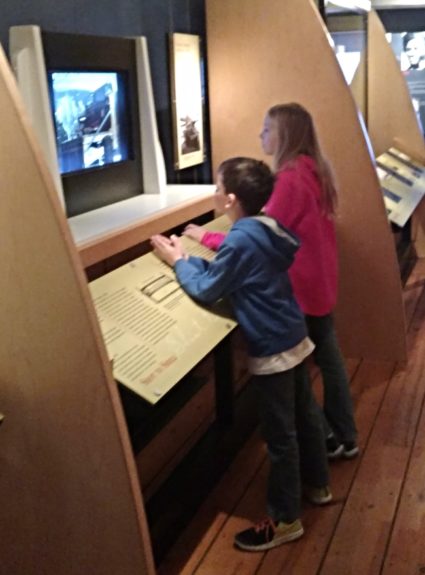 All in all, we enjoyed the day. I would highly recommend a visit, particularly in conjunction with a history study relative to any of the exhibit topics. I highly recommend the Sterling Point history series, and we’ve read John Paul Jones and The Barbary Pirates out loud to the kiddos. We’ve also enjoyed pretty extensive home studies on the Vikings, which always includes talking about ships and sailing. So they had a lot of background to walk in there with. 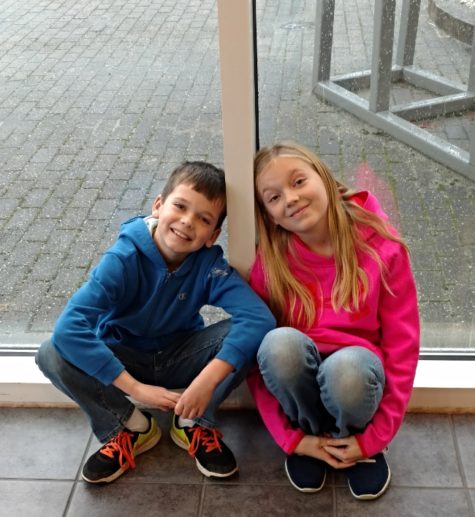 It was a good way to get out of the house on a rainy day. Have you been to a museum or exhibit lately? Most of our home learning focuses on history and nature study (because that’s what I love), but I think we’re going to branch out this year into art–so recommendations appreciated! I’d love to give the kiddos some background before we head out for a field trip!

By the way, our crew loves the graphic novel/comic book format right now, and if you do too, you should check out the Nathan Hale series or the Graphic History series for the elementary-age. I usually pick one up for each of the kiddos each Christmas and birthday, based on their personal interests.