With the nice weather this past weekend, part of our outside chores included moving the lambs (and their mommas) to new pastures. There’s grass coming up, so the goal is to keep the animals on fresh, green grass as much as possible. That involves a lot of moving animals around from one pasture to another, from one side of the farm to the other. 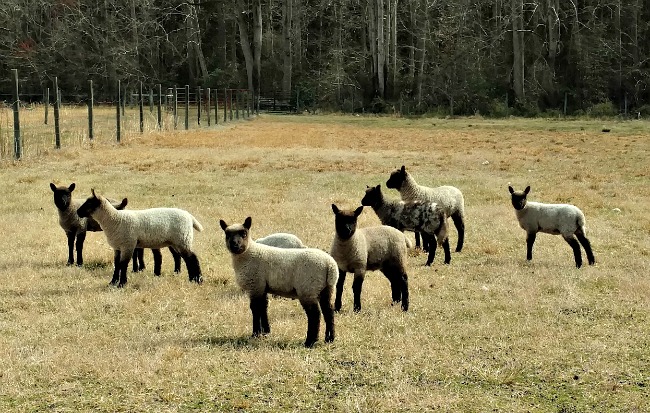 The older animals do fine with it. They’ve moved before and they understand the typical routes. They also know there’s good grass at the end of the move, so sometimes it’s harder to hold them back than get them going! That can cause problems because they gallop off and leave the new lambs (who have no idea what’s going on!) behind. Then the lambs get confused because they can SEE their momma through the fence, but don’t know how to actually GET there. They want to go straight to where they see her. But the fencing requires that they go DOWN the field, back UP the alley, and ACROSS to the next field. If the ewes get too far ahead, the lambs just panic and start crashing into fences trying to keep up.

Then the lambs get confused because they can SEE their momma through the fence, but don’t know how to actually GET there. They want to go straight across to where they see her. But the fencing requires that they go DOWN the back field, then UP the alley, and finally ACROSS to the next field. If the ewes get too far ahead, the lambs just panic and start crashing into fences trying to keep up. 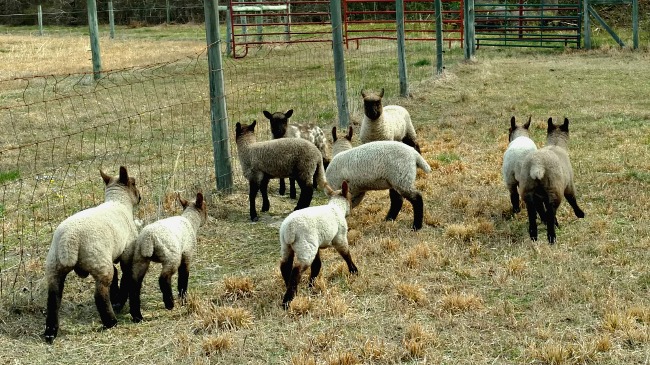 You have to leave the kids and dogs at home. {smile}

The cattle dogs can work sheep, but Coal is not trained well enough to turn him loose on a bunch of babies and hope it goes well! 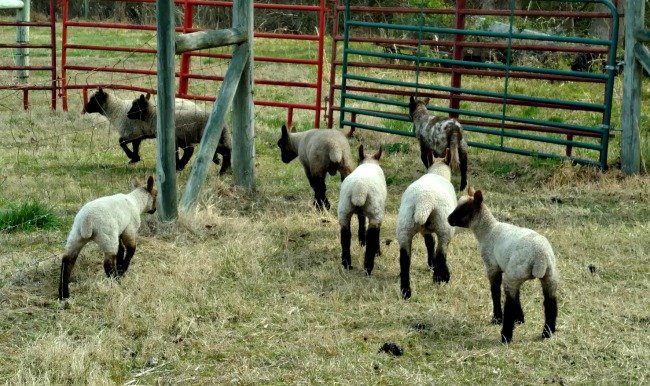 So when we ended up with 90% of our lambs still in the back field, while all of our ewes were across the farm, I threw on my boots and took over. (And Mr. Fix-It went back to working on the fence.)

One thing that really helped was that between Mr. Fix-It losing his temper and me putting the dogs and getting my boots on, all the ewes disappeared from sight into the grassy sections of the big pasture. This means the lambs couldn’t SEE them, so they calmed down and were more willing to follow directions when I clucked and shooed them along. If their momma had been standing across the fence 90 degrees to the right and I was trying to push them straight ahead, it would have been chaos. 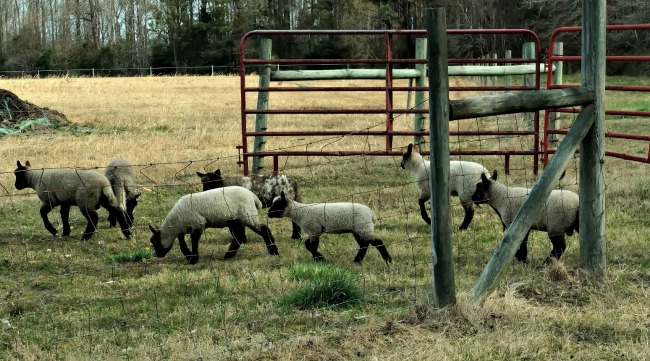 Right when we hit the gate, a couple ewes showed up from across the field to start BAAAAAing.

The picture below makes me smile, because you can see that a couple ewes came back and a few did not. Either way, all it took was one to help move things along–until we snag number two. 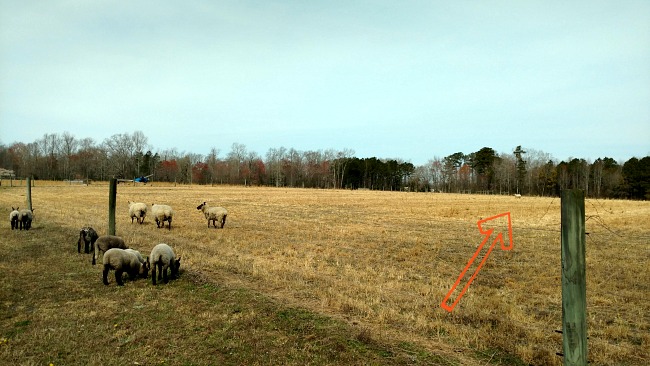 The lambs hit the alley with some fresh, green, spring grass and suddenly everything came to a screeching halt. That stuff is like CANDY after hay all winter! Even the older ewes were a little taken aback when the whole lamb train just de-railed right in front of them. They

Even the older ewes were a little taken aback when the whole lamb train just de-railed right in front of them. They wanted their babies, but their babies had suddenly decided independence was fine with them! 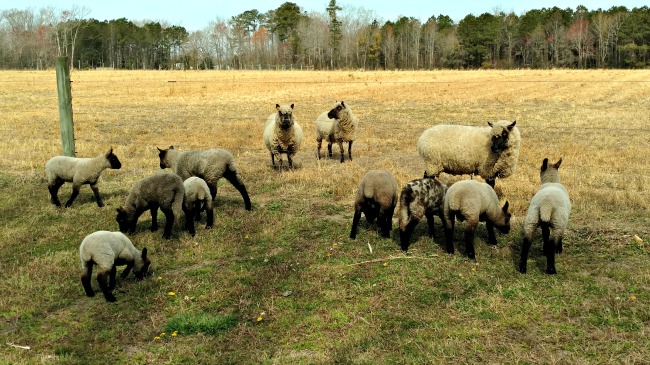 It took a little extra clucking and shooing to get them moving this time! 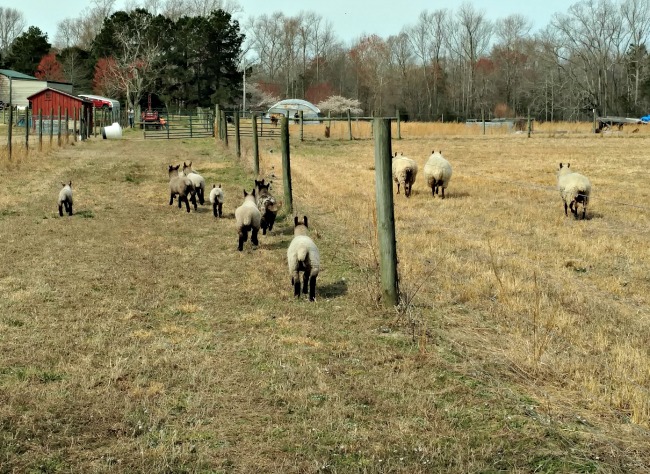 The ewes were actually coming back down the alley to collect them!

The older ladies know their way back and forth through the pastures and alleys pretty good at this point. They know how to go up and down the fence lines to the gates–even if they can see through the fence straight to where they want to go!  And they know that there’s good stuff waiting when they get there.

You can also see Mr. Fix-It and Speedracer a little further up, already working on fence repairs from their winter pasture. 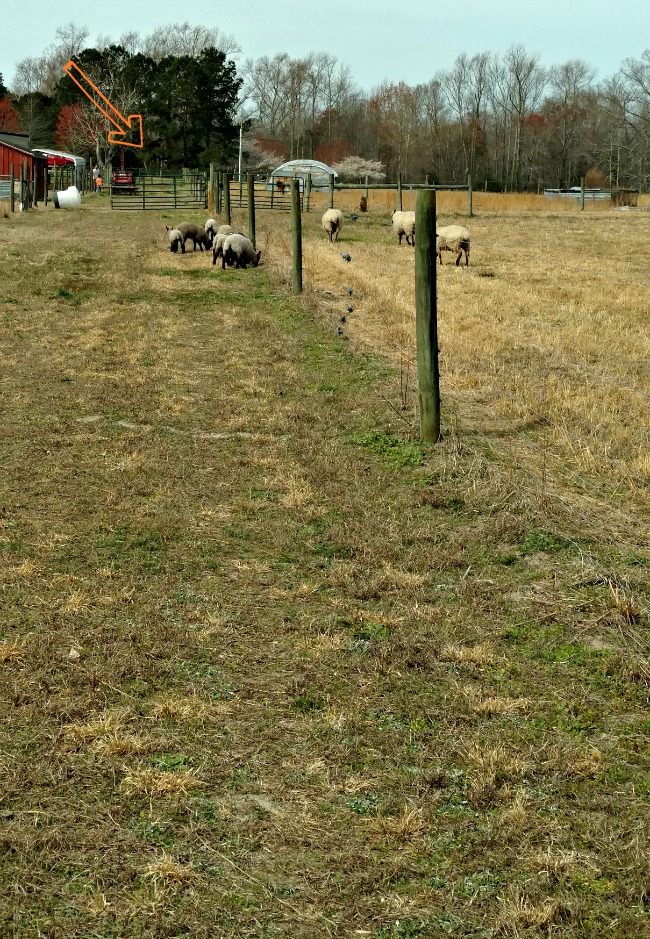 Eventually, they rounded the corner at the green gate up there and headed across the alley to find the rest of their mommas. And the grass. Kinda reminds me of The Land Before Time with Little Foot and his friends heading to the Great Valley where there was green food. {smile}

And did you know there’s like 13 of those Land Before Time movies now?!?! Sorry, I digress…these things make me feel old! 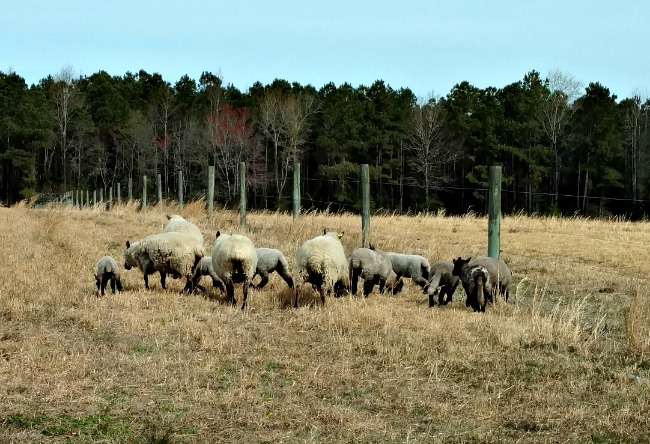 A couple good books for your shelf would be Temple Grandin’s Guide to Working with Farm Animals — which is an update of her original Humane Livestock Handling book, with a special emphasis on small farm facilities. (If you pre-order with Amazon like I did, you’ll get their low price guarantee!) You can also pick up some simple pointers in Carol Ekarius’ book Small-Scale Livestock Farming, where she breaks down the concept of herding pressure points so that even the farm kids could understand it.

It does also bring up a good point about designing your farm layout to have as many gates, and as few open exit points as possible. Gates are annoying for tractor work, but not nearly as annoying as animals getting out!