One of the things good spring weather means is that outside farm repairs can get going again. While I was moving lambs last weekend, Mr. Fix-It and Speedracer were fixing and replacing fence posts and adjusting gates. 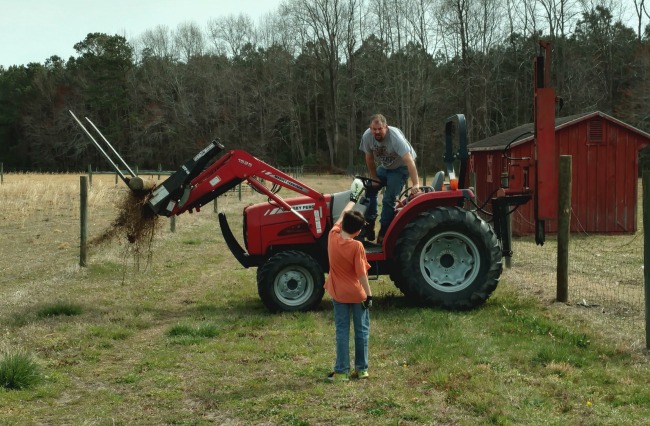 Some of our woven-wire fence is in bad shape these days. Cows and horses are tall enough to reach over and get grass on the other side. When they leannnned on it, it sagged. Running a strip of electric around the top will fix this problem, but we caught on a bit late and most of the damage was done.

By the way…if you’re looking at semi-solid fencing like this for livestock you want woven-wire field fence, not welded-wire garden fence. They usually don’t sell it at Lowes, you’ll need to go to a farm supply store. Animals can put a lot of pressure on a fence and the welds will pop a lot sooner. Woven-wire will bend and stretch, but we’ve only had one or two spots that actually broke over the last 13 years. 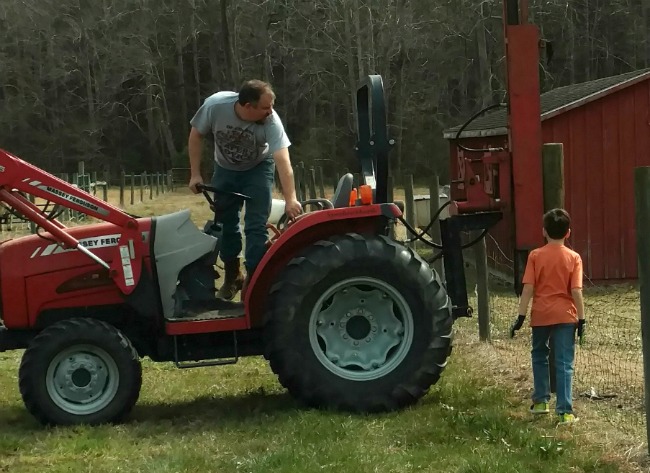 Anyway…we’ve had several fence posts in need of replacement the last two seasons. They can get damaged from being hit (by accident!) with the tractor or a piece of equipment. We’ve had one or two start to rot from the bottom and break off, or at least break loose, at ground level. And we’ve got a section of fence that was damaged by deer galloping through. They snapped two lines of wire and broke a post.

Before we had the hydraulic post pounder, we installed posts by either hand-digging (ugh!) or augering, and then re-packing by hand. We rented an auger for the weekend on our first pasture. We bought a 3-point auger attachment used for our second and third fields. Then we bought the post pounder before we tackled the big field. It was worth every penny–and didn’t cost as much as I expected either–although we had to take a road trip to get one at a price that worked for us and it needed a little TLC when we brought it home. 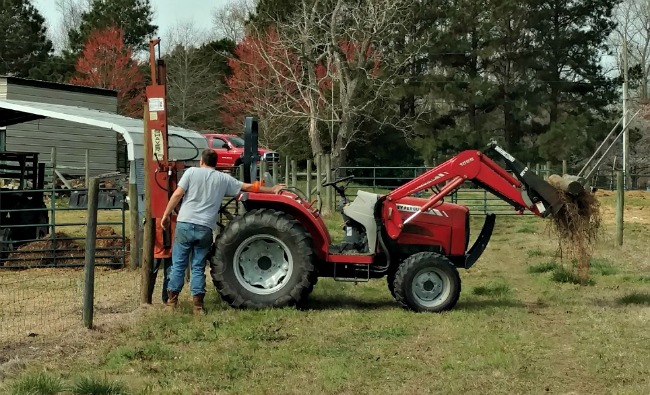 Mr. Fix-It pulls out the staples to release the fence from the old post. Then he pulls it out. Usually, since they’re broken, that’s not a problem. But he does also have a 3-point post puller that he fabricated for posts that are still entrenched. Then he’ll put a new post about a foot over from where the old one was, pound it in, and restaple the fence.

We’re going to be adding additional posts along this fence line later this year and doing some re-stretching. But for now, the animals are back in the big pasture and we’re just doing replacement work. 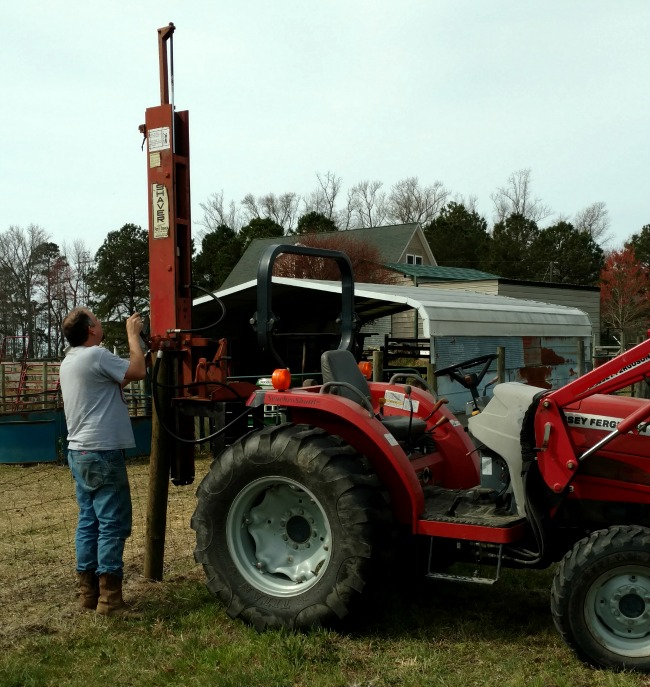 You might have noticed the other posts on the front forks of the tractor. We usually buy fence posts in bulk when we’ve got a big job. You get a discount on volume purchases, so we save up projects and get a trailer-load from Ag-Supply. Then we store the extras in the farm junk pile.

Mr. Fix-It also keeps an eye out on Craigslist and at farm auctions for people selling extras they don’t need for a good price. And we store those on the farm junk pile. Because we always need posts.

Here’s an interesting point–a metal T-post and a 3-4″ treated wooden fence post are about the same cost. Wooden posts might even be cheaper if you buy in bulk (although you can buy T-posts in bulk too!). T-posts are easier to put in by hand, for sure. But with the post pounder, wooden posts are often more economical for us. 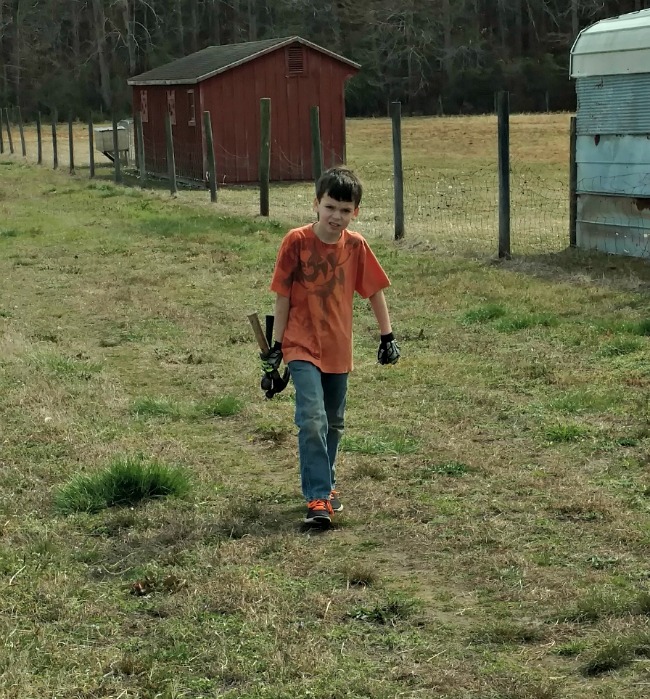 A note about fence posts…landscaping timbers are a couple bucks cheaper. I know. And they’re pressure treated (hopefully!). I know. But they are not going to last as long as and they’re not going to hold as much fence weight–which means you’ll have to use twice as many of them. They’re not going to hold up to animals leaning on them as much either. I would think long and hard about quality vs quantity when making that call. We have hundreds of posts out here and in 13 years, we’ve only had to replace a handful. It’s something to think about. 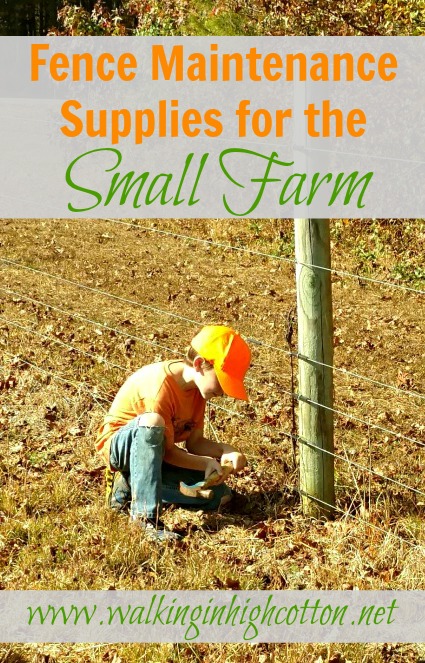 You don’t need to have a lot of any one of these, but it’s always good to keep some spares around or be sure you know where you can get them if something breaks. Our area has very limited supply of fencing materials, so you can never be sure they’ll have what you want on the shelf. With this list you can replace posts on woven or hi-tensile, you can add lines, fix breaks, add gates, tighten up sagging lines…pretty much anything until you get to replacement time.

Do you prefer the hi-tensile or the woven wire? Or board fencing–which is always lovely as long as it’s maintained (but costs so much more!).  We’ve been completely won over to electric fence. It goes up so much faster, is easier to maintain, is less expensive, and you keep so much of your viewshed. Sometimes you look out and don’t even see that it’s there!