Well, it rained all day on Friday. It was raining, soggy, and overcast all day on Saturday and we had some special events with the kiddos. So we were up with the sun on Sunday and got a lot of things knocked off the TO-DO list, including finishing up the rebuild on our mobile shade shelter. I talked last week about completing the structural rebuild and throwing a tarp over it until we could get to the permanent roof. This weekend we got the roof done. 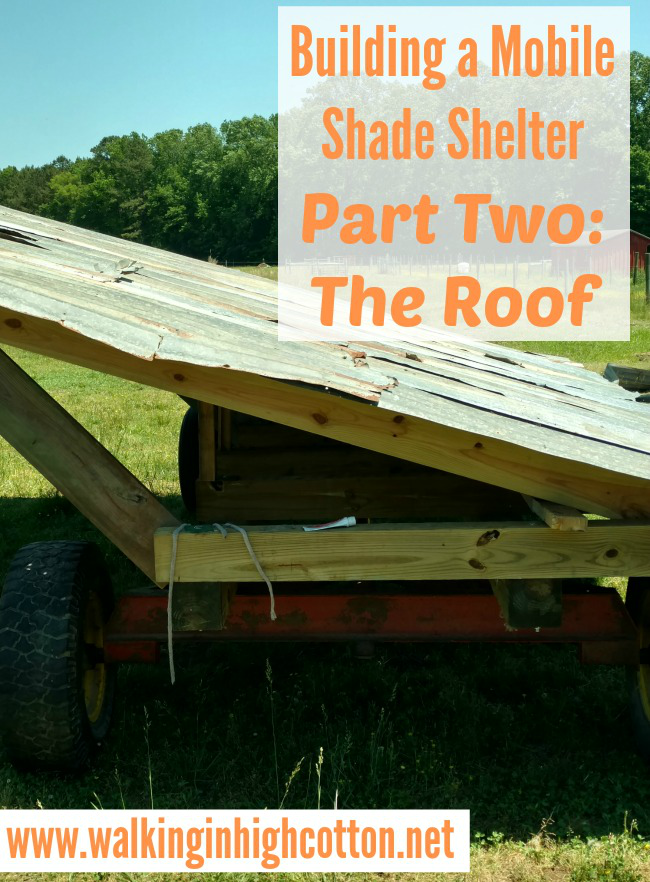 The roof was basically in one big piece. It was hard to tell if it was the original cross-boards holding the tin or the tin holding the beams. Either way, it was still all together. 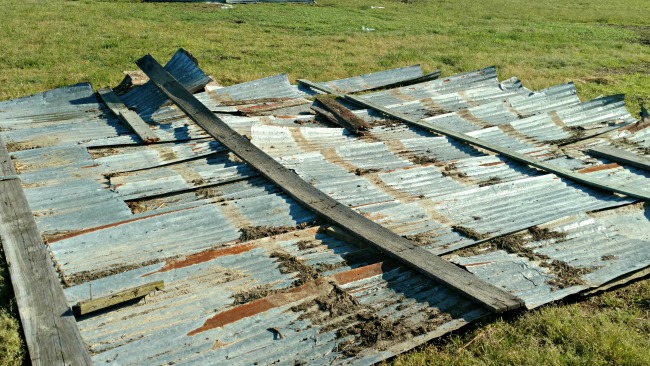 I had imagined that we were just going to flip it over and slap it on the new structure like we had in the past. Nope. That was not the plan.

There was too much rot in the existing boards to make the extra weight worth it. Plus some of the tin was really getting rusted out. It was old and used and rusty when we originally salvaged it, so after 10 years in our field, some of it’s just not in good shape anymore. There was also a slight size difference between the original structure and the new one. Mr. Fix-It was hoping that going a little smaller would mean we would still have enough tin even if we had to lose a few really rusted out pieces. 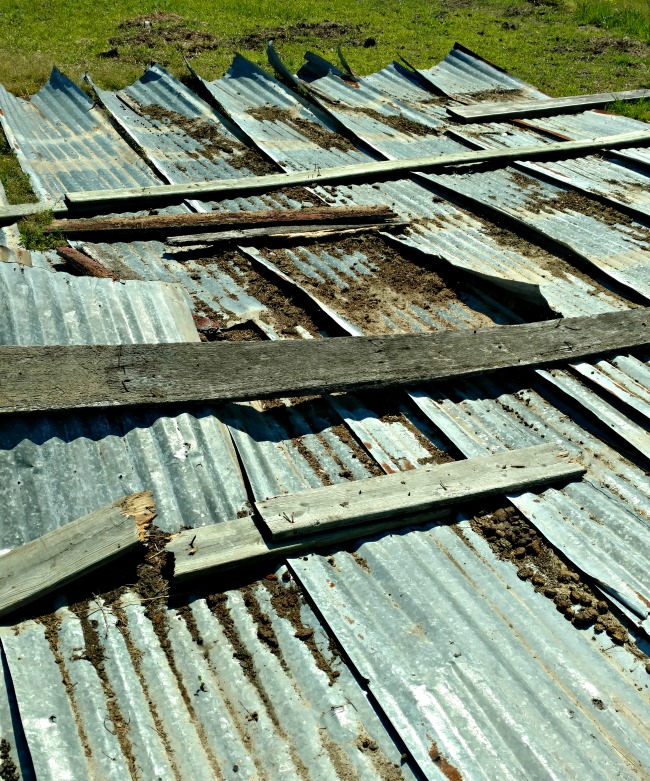 So we had to go through with a crowbar and hammer and pop all the cross-boards off. Which is when I realized how rotted they were (which Mr. Fix-It already knew, of course). Most of them came right off without a problem. Then we had a big pile of rusty old tin. 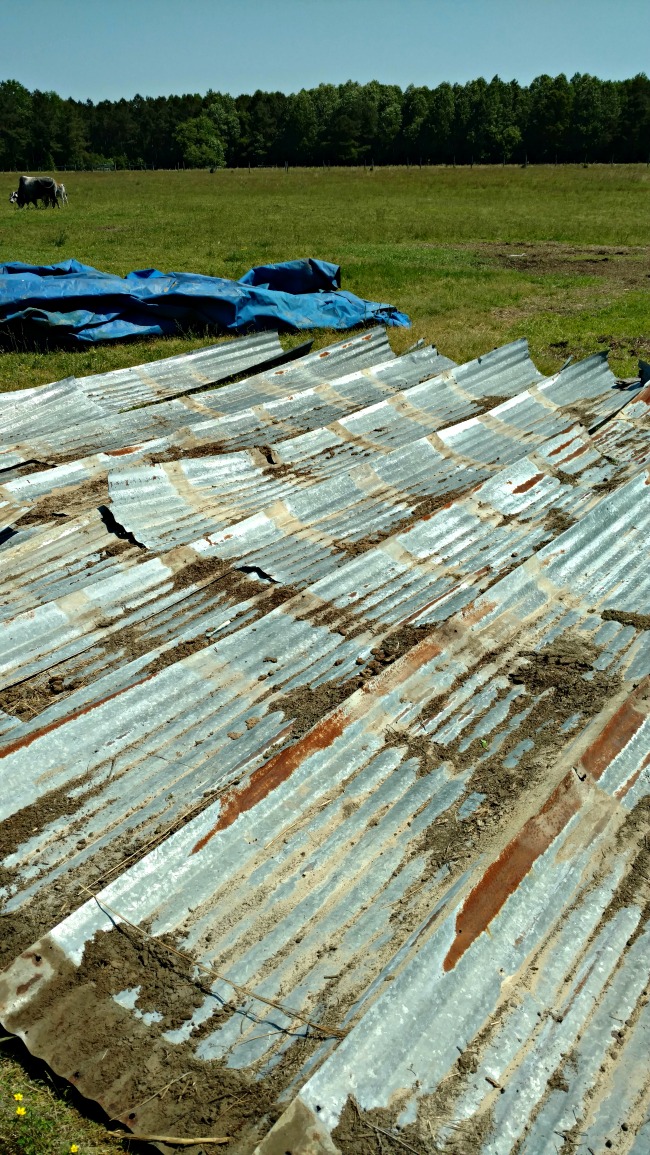 Now’s a good time to mention something.

This is one of the least kid-friendly jobs we do on the farm. They were out there helping–running for tools, setting up ladders, folding up the big tarps, etc. But handling rusted, jagged, razor-sharp old tin is not something we expect them to do a lot of right now. They don’t have the patience to be serious that long. {smile} We let them help with a few small pieces towards the end to give them the experience, but this was not a real hands-on job for them. 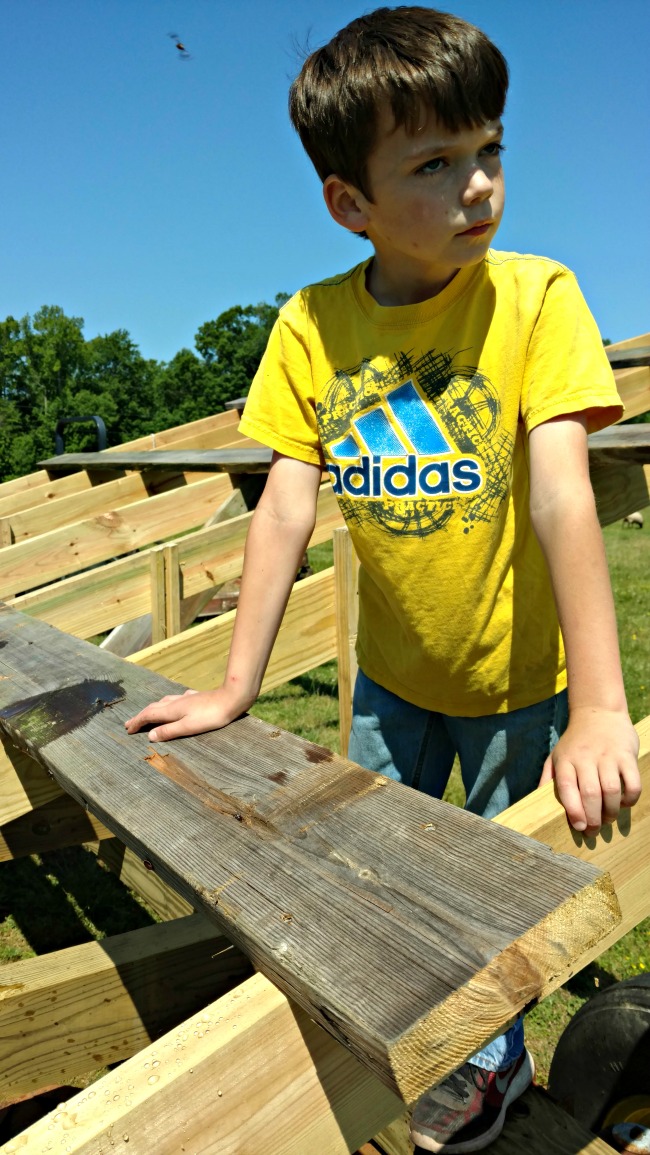 So there was a lot of grasshopper chasing and mouse hunting on the side! Some flower picking. Some shade-shelter-to-jungle-gym swinging. And at a few points some chicken house cleaning and water-bucket scrubbing because I just couldn’t take their goofing off so close to the work zone! 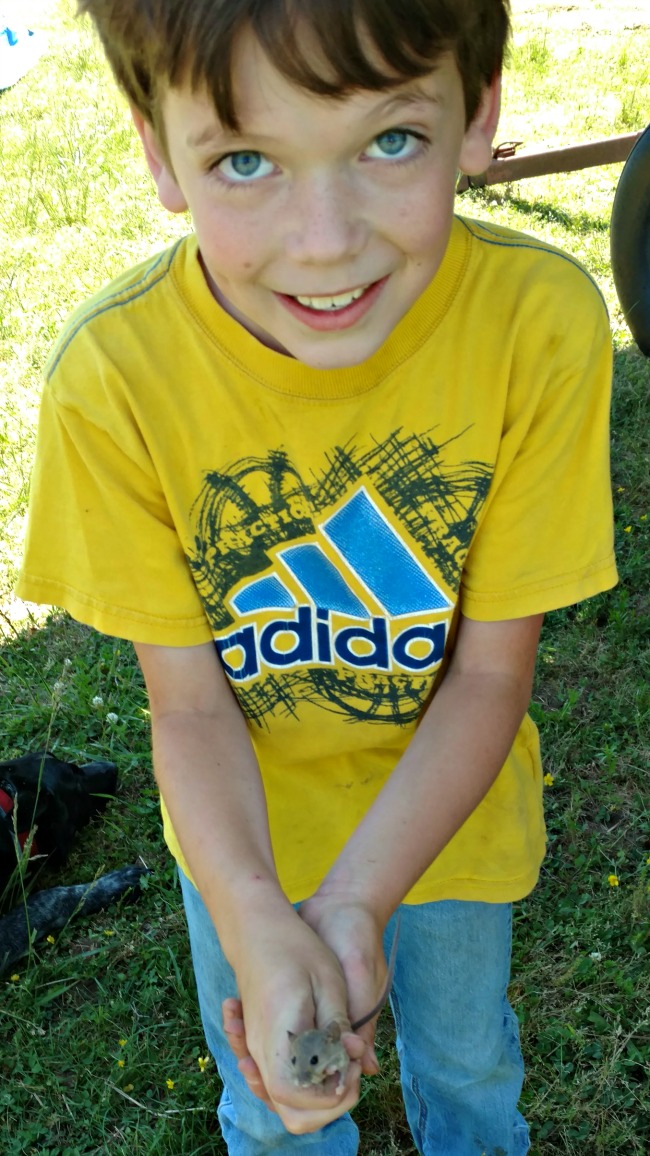 But once the tin was loose, we started piecing it on, like sewing a quilt. First sorting out the best pieces, then the biggest pieces. 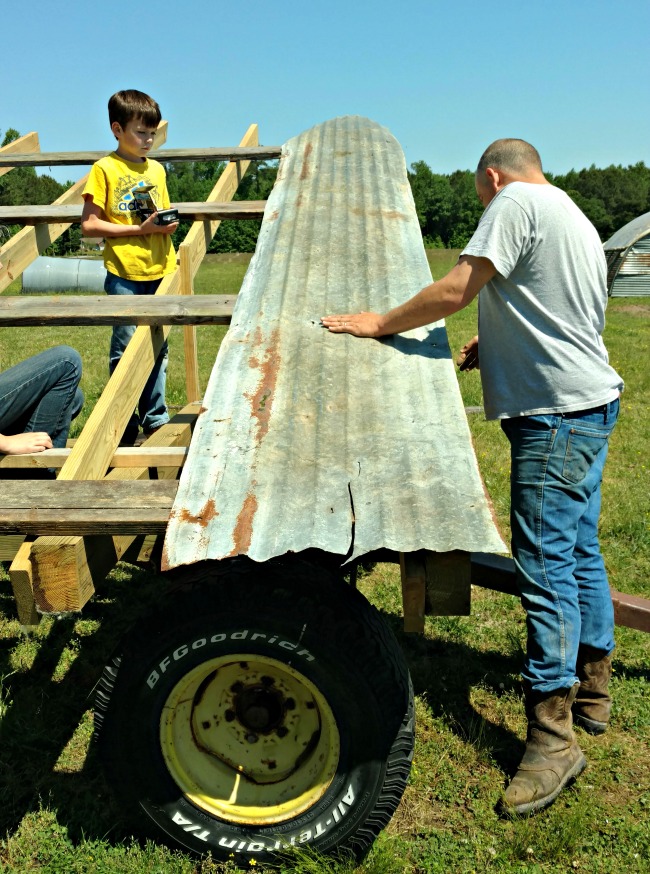 We went from right to left, tucking the next row UNDER the first row. Ridges running top to bottom for water flow.

Just for the record, these are little construction details that Mr. Fix-It takes for granted as common sense. I’d like to think he was right. But having almost no construction in my background, I have to admit that I’d never even thought about it before and I’m not sure I would have gotten it right. So I make sure that he explains all that “common sense” to the kids as we go. 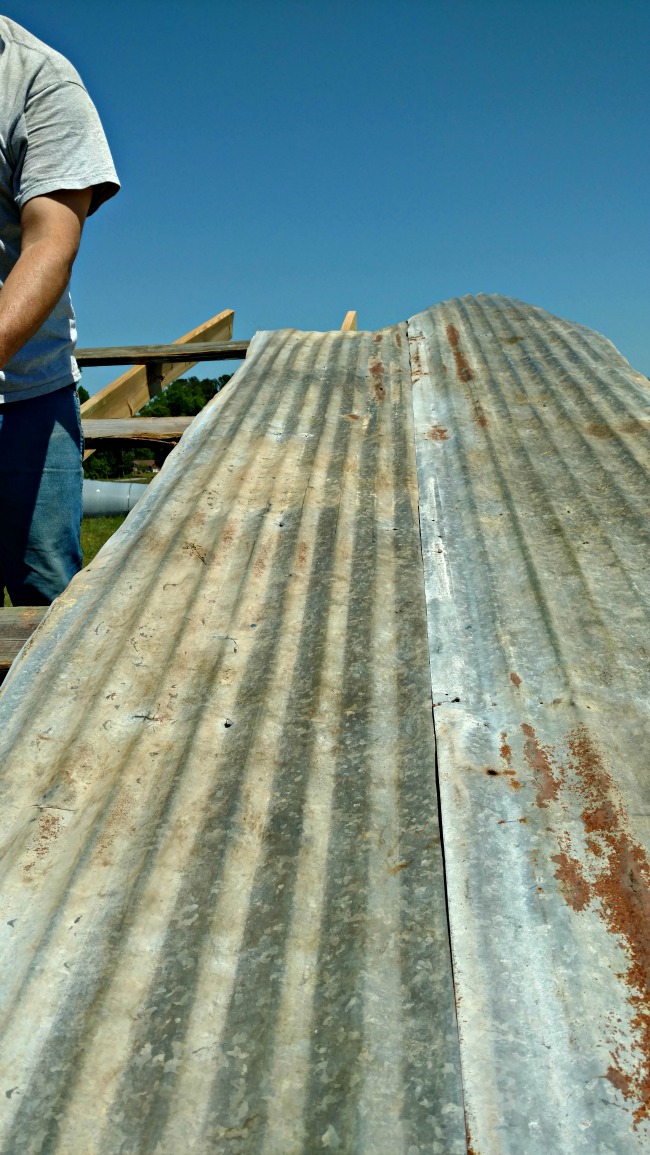 As we went further along, we had to start cutting the tin pieces down due to rust. So there was a lot more piecing to do. We also worked from the bottom to the top, with each new piece going under the row beside it, but on TOP of the piece below it. 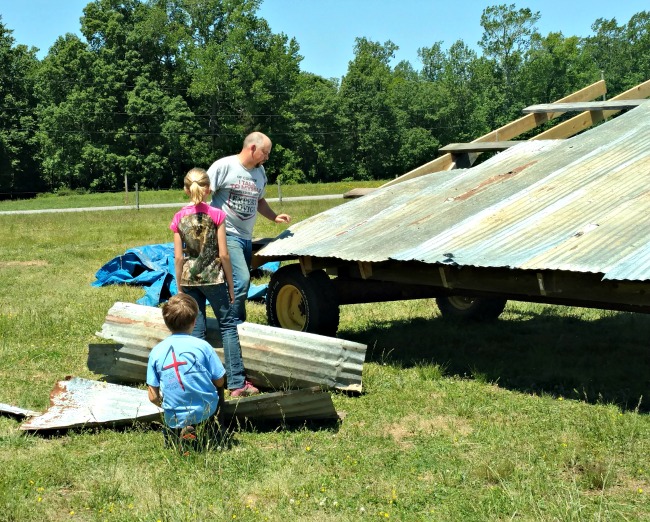 The last few pieces were much smaller, so the older two got to help carry them to the work zone.

The youngest one stayed on nail duty. 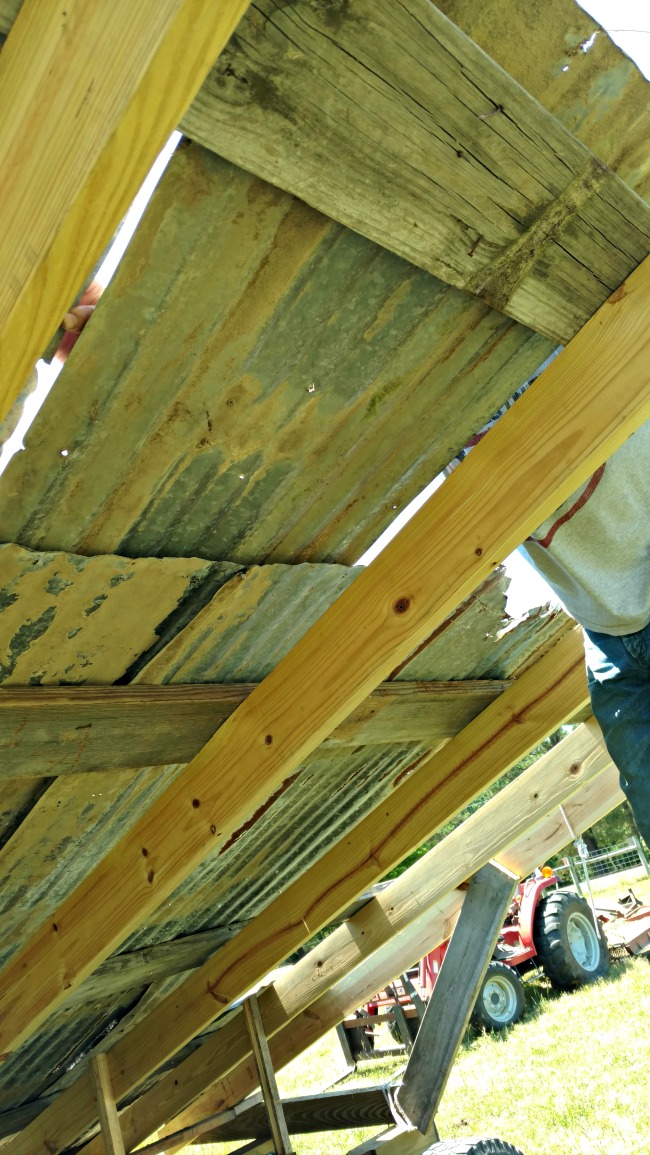 Once the tin was sorted, and particularly when we got to the smaller pieces, things really moved quickly. 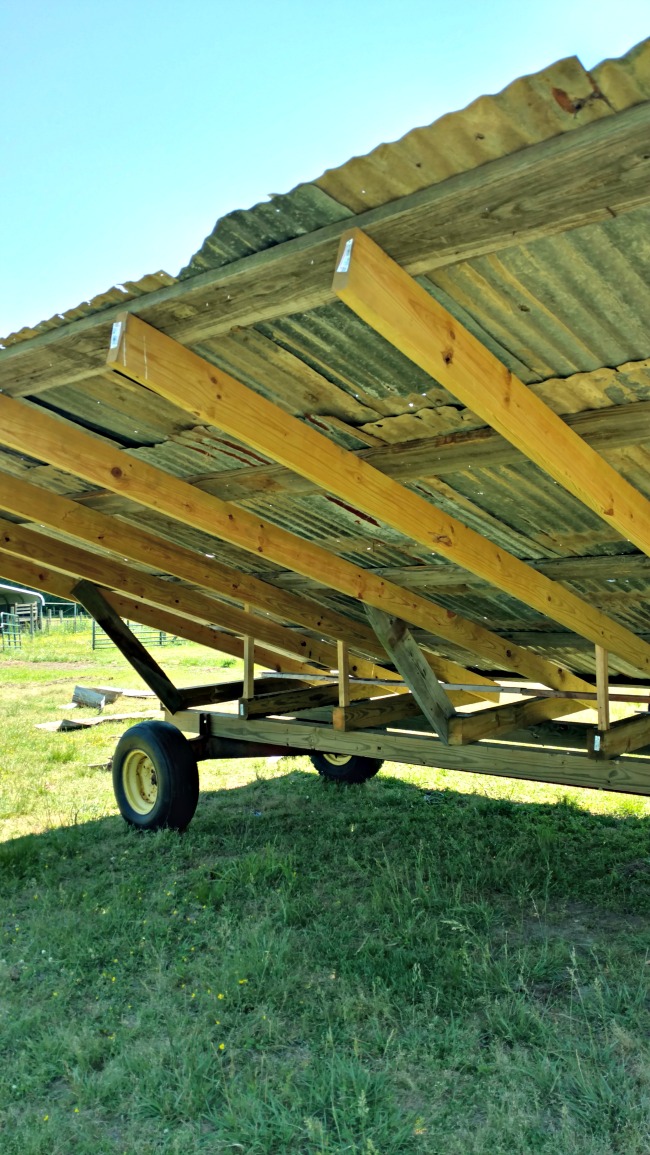 Which was good, because the kids were ready for lunch. 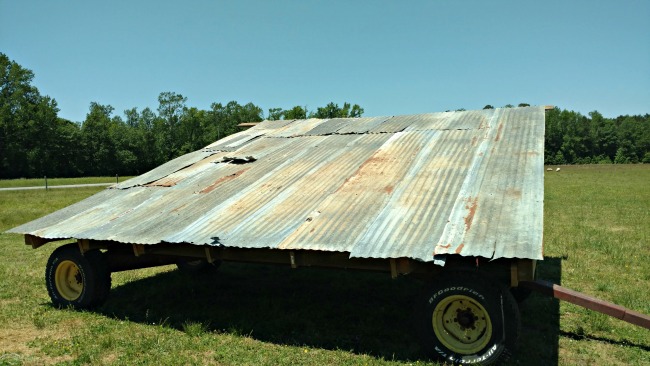 Even when they’re not hands-on in the job, we usually try to start together and finish together. So they weren’t allowed to break for lunch until we had finished and cleaned up. 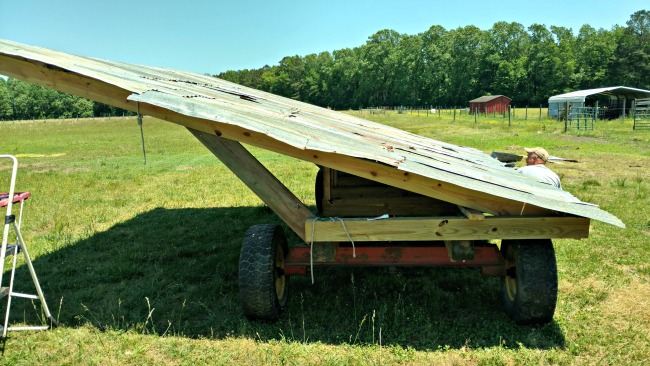 It’s one of those things about teaching and training diligence that we take so seriously.

Plus they’d had a big breakfast and two snacks in between. {smile}

We still have to get some metal roof paint put on there to finish it off.We’ll get the stuff with tar/asphalt in it to help fill in the nail holes and some of the rust damage. Be sure to read part one again to get the full picture of the work.

If you have any questions, please let me know. I’ll be glad to pass them along to Mr. Fix-It, since he’s the resident farm engineer! {smile}