This is Virginia. We don’t own snow pants. Or snow boots for that matter.

ONE, because we don’t get much snow. (And when we do, we just put plastic bread bags over our legs in our regular boots and head out–anyone else’s parents make them do this as a child?)

But TWO, because when it’s that cold, we like to stay inside! When it’s in the single digits like the last few days, we only go out for one reason–chores. And you can’t do chores if you’re so bundled up that you can’t bends your knees and elbows! {grin} 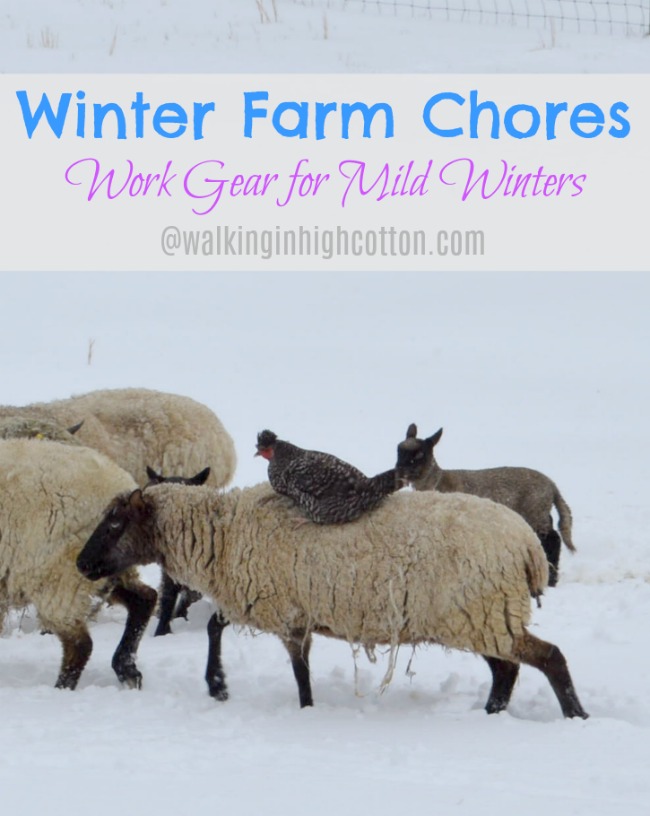 The boys wear a Fruit of the Loom thermal base layer shirt, a regular shirt, and then their winter coat.

The Ladybug wears a Fruit of the Loom thermal base layer and then usually a hoodie, and her coat. (She’s hoodie-crazy, but that’s another post!)

Then we put the kiddos in Carhartt Active Jac coats because nothing–not rain, not snow, not wind, not mud, not briars, not nothing–is getting through those coats. Believe me, we’ve put them to the test around here. We always go with neutral colors because it’s going to one of the boys when she’s done with it!

Mr. Fix-It spends the winter in a Heavy-Weight Rain Defender Hoodie. I’m not exaggerating. This is what he live in below 40 degrees, just add a thermal shirt and bibs. If you’re wondering, the weight classification really does make a difference. The heavy-weight sweatshirts really are a reasonable coat replacement for most of our winter and he thinkings less bulk and ease of movement is more important than extra warmth. (Also, no zippers to scratch stuff!) He wears Base Force Super-Cold thermals if needed.

I wear ColdPruf base layers and a Carhartt Active Jac all winter. {Hint: I strongly recommend you try on Carhartt Women’s Coat sizes in person before buying. They are very different. I wear an L in mens’ active jac, but my Women’s is a 2X.} 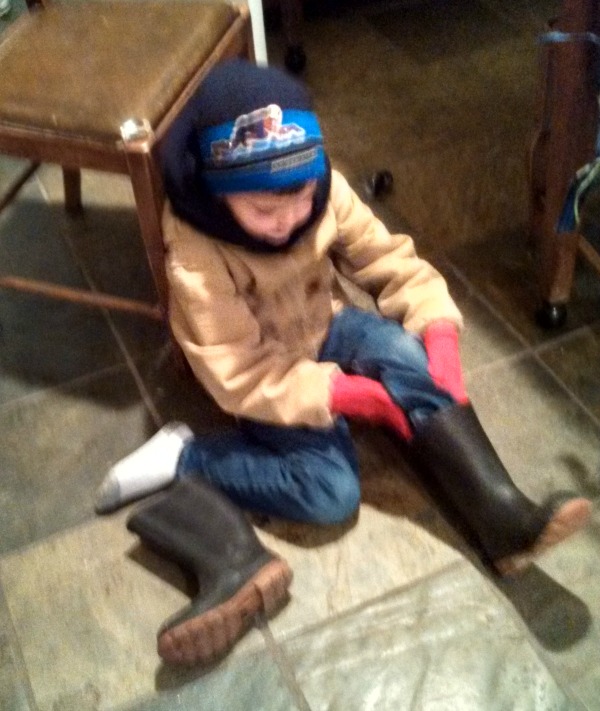 Speedracer gearing up for evening chores the other day.

During the week they’re usually out there in jeans on their way to or from school. But on the weekend for longer chores, we’ll put a pair of thermal base layer pants on under unlined bibs. We prefer to go with unlined so they can wear them for work all year. Like their coats–nothing’s getting through easily.

I wear lined bibs in the winter, but Mr. Fix-It thinks they get too hot and just throws his unlined ones over his pants. They’re utterly impervious to barnyard muck and mine have lasted for years now! I can kneel down in a puddle with a sick animal and not feel a thing.  {Pss…I wear mens’ because I find the women’s cut ridiculously slim-fitting. Also, you want the side leg zippers, trust me!}

Tall wool socks are the way to go. We’re sheep farmers, of course, so this wasn’t a hard sell. {smile} But wool socks are a little more work in the laundry world, so I only use them for winter wear for the kiddos. I like Carhartt socks, but I’ve also found Free Country wool socks to be a good, sturdy, mid-range option. {We have found Carhartt mens’ boot socks to run HUGE, size-wise.} 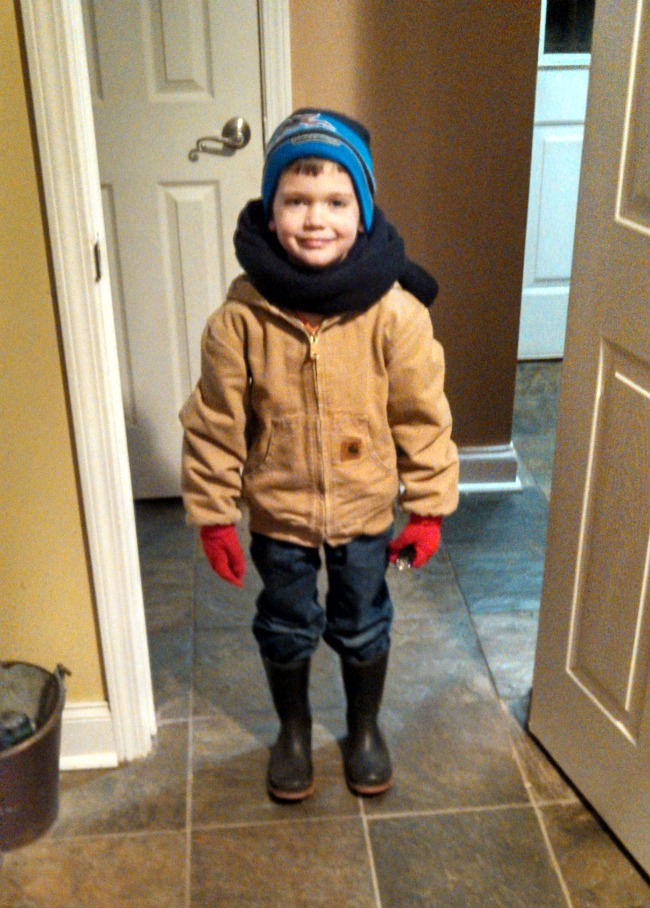 They have to be able to move, grip, twist, bend, and run while they’re out there–not just bumble around. {smile}

We get the crew’s muck boots from WalMart. They aren’t the highest quality, but they serve their purpose, the price is reasonable and they usually last until the wearer out-grows them. We’ve also just used kids rain-boots if we get a hand-me-down pair and they hold up too. The point is that they need to be really waterproof, tall, and wide enough that the munchkins can cram their pant legs in.

If you’re looking for great kid-sized work boots, we love Georgia Wellington boots. Solid product–usually good for at least one or two hand-me-downs!

For adults (whose feet are not growing every. single. year.) I think it’s worth investing in The Muck Boot brand wellies. I didn’t at first, but 15 years and 13 pairs of cheap boots later, I’m sold! 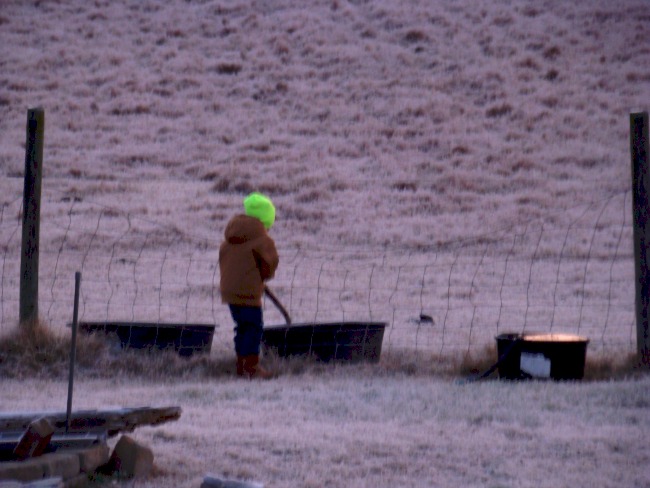 The Cowboy is a fan of lime green hats and prefers his work boots to muck boots if he can get away with it!

We add an Acrylic Watch Hat because they’re sturdy and warm, unisex and universal-sized (we buy the mens’ and the kiddos just have a little extra fold when they wear them), they hold up to washing well and are inexpensive to replace or keep extras around for company. I’ve got a few stashed here and there in all our vehicles at this point too!

Oh yeah, and they come in just about any possible color, so we can each express ourselves. {smile}

Then we wrap them up to their eyeballs in a homemade knit or fleece scarf.

Gloves are a problem.

I have a pair of women’s insulated gloves that I love and I’ve got my eye on a pair of mittens that I think would work too. The problem is that they’re super bulky and I find myself taking them on and off constantly to get things done. But they are warm, no question.

Mr. Fix-It has a pair of warm all-purpose gloves that he’ll wear if he’s out walking or playing with the kiddos. But otherwise, he just wears Mechanix gloves, if anything.

We have trouble finding anything for the crew. We find that kid-sized work gloves are usually a poor fit and they can’t stand to keep them on. Kid-sized “gardening” gloves are usually poorly made and don’t hold up. And anything like ski gloves/snow gloves are too big and bulky for the munchkins to have any finger dexterity for their jobs. Right now we just have some cheap knit stretch gloves for them. They cut the cold, but they don’t do anything to keep out water and they are too slippery to open gates or doors. The kids have gotten good about just taking them off and shoving them in a pocket when they cause a problem, but then they are hard to slip back on again.

We’re thinking of trying something like these easy on, easy off North face mittens but the price is making me hesitate. We don’t get much snow to invest that much for each child in something they’ll outgrow in a year or two UNLESS they’re good quality and I know they’ll work and we can hand-me-down (like their coats).  Do you have any good recommendations? 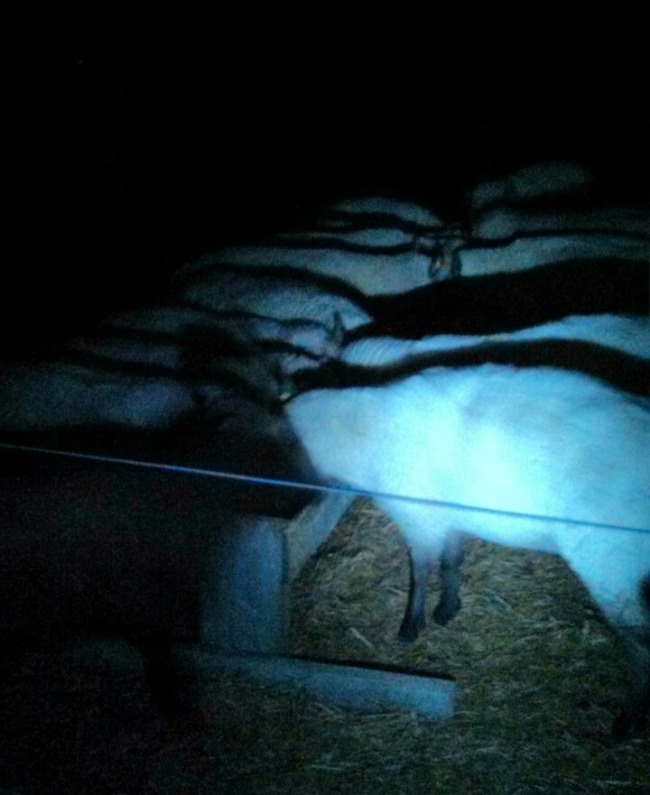 Having to do everything in the dark (morning or evening) makes it seem that much colder this time of year!

I know some of my readers are from areas much colder than here! What do you wear when you have to get out and about in the winter cold?