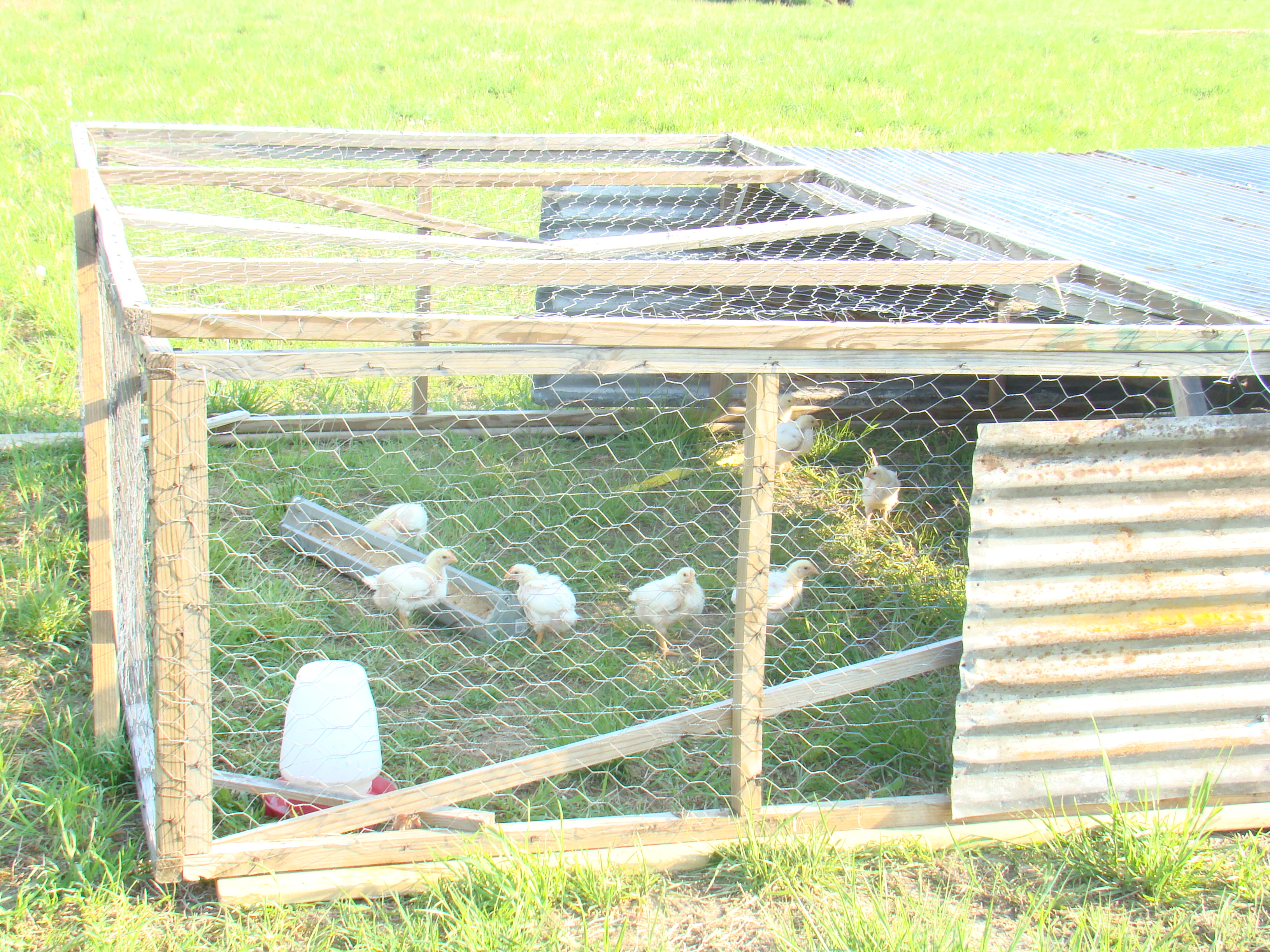 That picture is actually them from a few weeks ago–they were bigger a few days ago but I was distracted by contemplating their future and forgot to take pictures. But as of 8:30 pm on Saturday night there are 18 fresh chickens from The Lowe Farm chillin’ in our garage freezer. 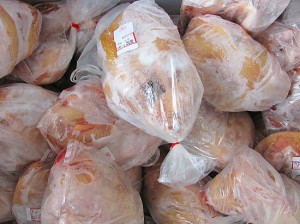 Yep, I now have a personal understanding of that old country saying “runnin’ around like a chicken with your head off.”  Thankfully, there was no actual running around involved in our afternoon.  But I can now see the potential, and as much as I like to pretend to nerves of steel, I don’t think I could have handled that.

I am excited to report that it wasn’t as bad as we expected.  I mean, it’s sort of like dissecting frogs in high school–lots of build-up drama but not much gross-out once you’re at the table.  And no nasty formaldehyde smell either.  We’re going to do it again.  If you’re coming to visit us this summer, Mr. Fix-It is already working on an outdoor rotisserie on our fire pit…

Read on if you’re interested in how we did it…(Don’t worry, none of these pictures contain any chickens or yucky stuff happening.  If you want more details, send me a note over there from the top right sidebar)…and if you’re wondering about the math–a couple birds had previous injuries from an earlier predator attack (still not sure what it was, but it didn’t come back) that culled them after close examination. 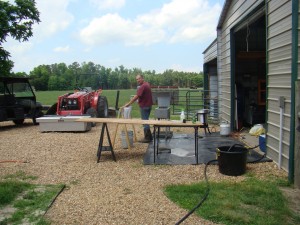 Here’s the lay of the land on Saturday.  Mr. Fix-It set up “the site” right in the driveway.   These folks probably got more than they bargained for out on their Saturday afternoon ride… 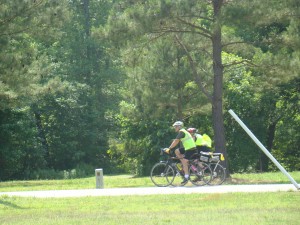 Out for a weekend ride past our driveway. May 2010.

And Mr. Fix-It was really nice about giving me the easy jobs.  I walked back and forth from the field, bringing chickens from the pen to the site.  In the future, we’ll probably move all the chickens off the grass and nearby the site the night before to save time (and my leg muscles). 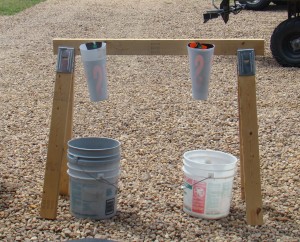 I would shove the birds head first into these cones and go weed the garden for a few minutes while Mr. Fix-It did the yucky job of killing.  This was definitely the most unpleasant part for me–although there really isn’t that much “yuck” with the cones (no one jumped out and started running around or anything).  And if you’re wondering…Mr. Fix-It engineered those kill cones from FOR SALE signs.  They make stainless steel ones (for $40 each!) but we weren’t going to invest if we both ended up yakking, vowing to never do this again, and adopting the rest of the birds into the backyard menagerie (which would have totally happened if anyone had jumped out of those cones and started running around headless). 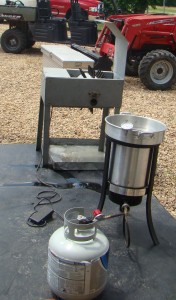 Step 2: The scalder and picker.

Next we scalded the birds (dunked them a couple times in really, really hot water) in our turkey frier.  Who knew that thing was a multi-purpose investment?  The temperature is very important (we found 140 degrees to be optimal) for easy picking so there was a lot of adjusting throughout the afternoon–add cold water, heat, drain too hot water, add cold water, heat…

Then Mr. Fix-It would push that black pedal on the ground, those rubber fingers would start turning, and he would hold the chicken over that picker while it beat the feathers off.  I think the official term is “picked” the feathers, but it looked like it was beating the poor thing……….ok, I almost typed “to death,” but everyone might not see the ironic humor there.  I’m sure my inbox is already filling with hate mail from PETA.  Moving on… 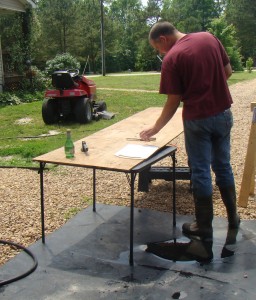 Step 3: Take everything that’s inside, out.

The naked chickens (I will never laugh at a rubber chicken again–they are painfully like real-life) come to this table.  Mr. Fix-It chops all the parts you don’t see in the grocery store off and takes everything that’s inside out.  It was a team effort.  I stood there watching for moral support.

Actually, I was the Quality Control.  He handed me the bird and I had to check and make sure that there was nothing left inside.  Not fun, but he’d done the worst of it.  Then I rinsed, rinsed, rinsed and tossed them in the black chill tub.  Then I would trot off to get a couple more. 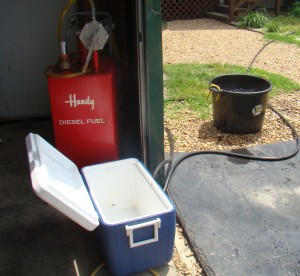 While Mr. Fix-It was dunkin’ and pluckin’ I would move the finished birds from the chill tub to the ice water cooler and rinse off the table.  Eventually they got one more rinse, then were dried, bagged, and tossed in the freezer.

Whew!  If you’ve got questions, go ahead and leave a comment or send me a note.  I’ll be glad to answer them.  I love questions about this stuff.  I think it’s so important that people understand where their food comes from and how it gets to their table.

Or you can just Google it.  I would suggest you stick with terms like “chicken processing” to weed out some totally gross and inappropriate stuff.  But Mr. Fix-It watched several different farmers go through the whole process step-by-step the night before on YouTube as a refresher.  The internet is amazing.

I will say this though–we were able to do 18 chickens and freeze them for later.  If we didn’t have refrigeration and I had to do this every time we wanted chicken for dinner–my family would be vegans.