I don’t have many personal memories of my Poppa Pol, my mom’s dad.  It’s yet another reason I’ve taken up blogging and scrapbooking.  We lost him to cancer when I was only 10, and they lived several states away from the time I was about 4.  I remember that he was a big man.  I remember, picture perfect, him sitting in his big blue recliner and eating pepperoni.  I remember him driving a little truck and the horn played music instead of beeping.  And I remember eating funnel cake with him, although I can’t remember where we were.  So many other memories float in my mind, but I’m never sure if they’re real, or if they’re my imagination from all the stories my mom told me.  But I do remember being excited every time they came to visit or we went to visit.  Madly excited.  Visits with Nana and Poppa were the highlights of our year.  I remember love.  Being loved.  (Truth be told, my mom was the favorite.  Until I came along.)  Being loved and spoiled and loved some more. 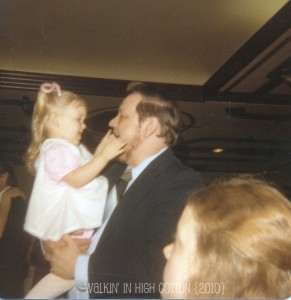 Yes, that's me with my poppa Pol.

Poppa made the Army his career and he was good at it.  He was a praticing Catholic from a close-knit Polish family in northern PA.  He was one of 9 and carried on the tradition of big families by having 8 of his own (my mom was #3).  His influence stretches far and wide across our family web, even though we lost him too early.  Even 20 years later my own mother spoke of him so often it was as if we lost him only yesterday. 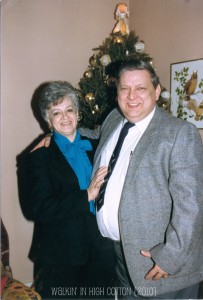 Here’s some Father’s Day thoughts from the Pol Clan…

Dad worked hard and partied hard as well.  There were times when he would overwork, drink a bit too much after work and pass out on the couch or floor.  One day when we were living in Japan, he came home in the afternoon and fell asleep on the floor.  About half an hour later, we had an earthquake.  This wasn’t so much an unusual occurance, we had them about once a week, but this particular one was stronger than normal.  Strong enough to move the furniture and lose pictures and knick knacks off the walls.  Dad, sleeping on the floor right in the middle of the living room slept right through it.  When it ended, Mom gathered us all (Mark, your Mom, Chrissy and I) and we started to clean up the mess.  During the middle of our clean up effort, Dad woke up, looked around at the disarray and began screaming at us for messing up his house.  We told him what had happened and he told us that was not possible because he could not sleep through an earthquake.  He had us lined up and was about to dole out punishment when Mom came in from the kitchen and asked what was going on.  Dad began to explain how we, the kids had gone through then house like a tornado and we were going to be grounded for destroying the house and lying to him about doing it.  Mom told him that we were telling the truth and asked him if he thought we could do that much damage right on top of him without waking him.  He  stopped, looked around, got a real quizzical expression on his face, burst out laughing hysterically, looked up at us, apologized and said “looks like as soon as we get the house clean I have to take you out for ice cream”.  The four of us had the house completely straightened up in five minutes and we were out the door for one of our favorite treats.

There are a few things that come to mind with me about my dad.  Of course, it is always about what a fun-loving guy he was.  He was always the center of attention at any gathering because he was always telling jokes and stuff.  I actually used to tell people not to laugh because it would  just encourage him.  But I was a stupid teenager then and didn’t appreciate it like I do now.  Also, my favorite story about my dad is that every year he would take us out to buy a Christmas tree.  My mom would stay home to get the space ready where the tree would go and she would always tell him not to get too big of one because it had to fit in whatever space she wanted it in that year.  Needless to say, when we got home it was always too fat and too high and we were always cutting stuff off the top and the bottom and trimming off branches to make it fit where she wanted it.  Then she would use the clippings to put in the fireplace as the floor of the manger scene she would put up.

I have known my social security number for as long as I can remember.  Because he had to fill out so many forms for the military and everything had to be in triplicate, it was our job to remember our own numbers because he couldn’t remember them all.  When he was in Thailand and Vietnam, he would make tapes and send them home to my mom.  She would listen to them in her room.  Then she would call each of us in there one by one to hear whatever he had to say to us personally.  I wish someone had saved those tapes.

When I think of my dad, I think of his deep, hearty laugh and his beautiful piercing blue eyes!!  My dad wasn’t perfect, and our childhood wasn’t ideal, but I loved it and wouldn’t trade it for anything.   He drank too much, got loud and obnoxious and could be mean.  He had a very quick temper.  He was tough and had very high expectations for his children.  I will always remembering him saying “Study hard, be good, get straight A’s and don’t give the teachers a hard time” in the mornings before school.  I said it to my own son when he was in school!   The song ‘Daddy’s Hands” reminds me a lot of my dad.

There’s no doubt about it — my dad loved his family, loved his country, and loved John Wayne movies, which he could quote perfectly!!  He was proud to be an American and had no problem saying “If you don’t like the US – get out!!”
He truly enjoyed all sports.  He believed that no basketball player should ever miss a free throw, and no football kicker should ever miss an extra point.  He was great with a yo-yo and had a terrific singing voice.  He was my dad, and I loved him!!