So often as parents we think our kids should “do as I say, not as I do.”  We all know it’s not true (because we all know how we are and what we think when someone says that to us!)  but there’s just a monument weight on your shoulders when you know those little eyes and little ears and little minds are trained Right. On. You.

Oh, and if you’re not a parent don’t think you get out of this!  If you interact with kids and young people, depending on their age and home life your thoughts and actions might have even more influence, for a time, than their parents.

But let’s face it.  They’re mostly looking at me and Mr. Fix-It.  And sometimes the burden of responsibility (coupled with our total lack of perfection) is crushing.

Take Thursday afternoon…to the south the sky looked like this… 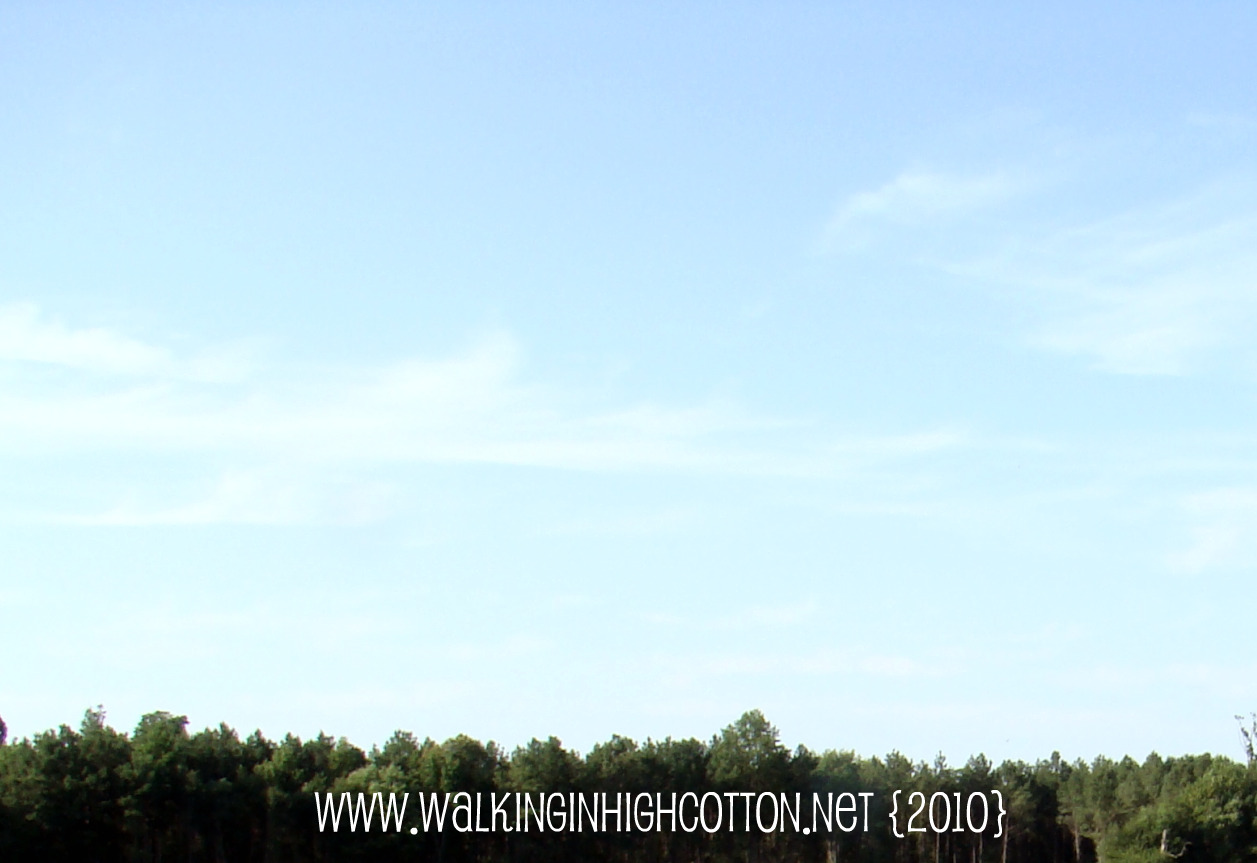 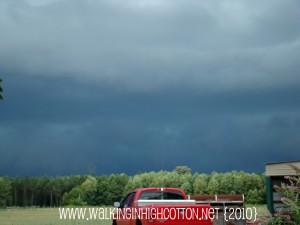 And I spent the whole drive home from work shushing the kids so I could hear the emergency tornado warnings for neighboring counties.  I got home and immediately charged into the backyard–still in my work clothes and sandals (yes, brilliant, I know)–to round up chickens.

(Just for the record, chickens don’t like to be “rounded up” by frantically shooing, chasing, clicking, finger-snapping, clucking, women teeter-tottering around the backyard with their heels sinking in the dirt and shaking a fake-you-out bucket of pebbles like it’s got corn in it.  This approach has yet to work out for me, although I’ve tested numerous iterations.) 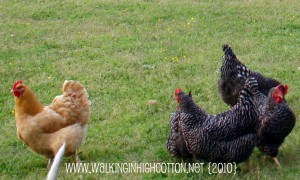 This was doomed from the start...

After slamming the coop door on 5 of the 8 hens (almost literally on one real slowpoke), I turned around to take stock of the situation just in time to see the Cowboy untie the gate to the sheep pen.  We’ll save the discussions of all the whys involved in that statement for later.  For now, know this, I was not happy about it. 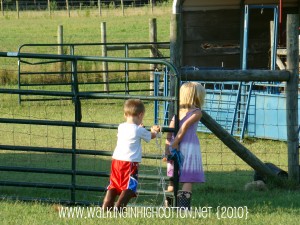 Ever heard the expression "closing the barn door after the horse is out?"

Why?  Because an entire flock of sheep respond to the above mentioned crazy-woman behaviors even less well than chickens. 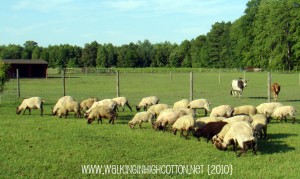 I wish I could say that I immediately stopped chasing, flapping, etc. etc. etc., went inside, changed my clothes, and came back out to calmly gathered the sheep up before going about the rest of my evening.  But if you read the first couple paragraphs you can probably imagine that no such thing occurred. 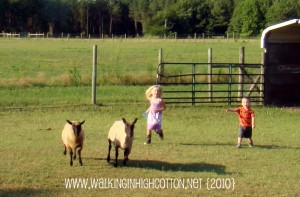 Speedracer plays out pretty fast in these situations...

Here’s a couple quick lessons in farming and raising kids that I should be well versed in at this point. 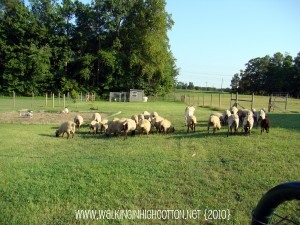 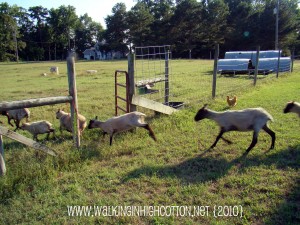 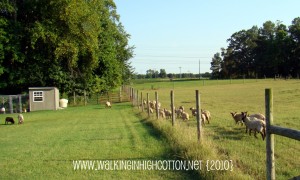 Galloping down the line... 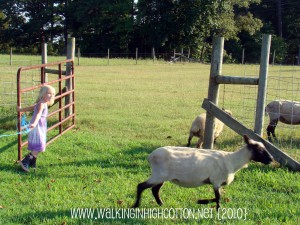 And coming right back out!

Then I paused (maybe collapsed would be a better word) to catch my breath and while I was quiet the Ladybug screamed to her brother, “Hurry!  A tomato’s coming and we gotta get inside!”

Between the warnings on the radio and my ridiculously frantic behavior…I can only imagine what kind of veggie-riddled calamity my poor kids thought was coming their way. 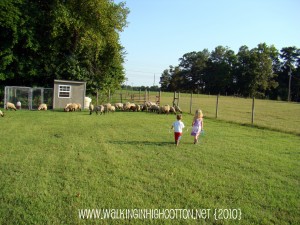 Nothing ever goes according to plan.

I was certainly not modeling calm, responsible, or efficient behavior under pressure.  I wasn’t modeling respect for others by screaming and commanding them around the yard like inept sheepdogs.  I wasn’t modeling calm, quiet, respect-not-fear behavior around our animals with all my flapping and screaming.  And don’t even get me started about modeling respect for our possessions by not even taking 2 minutes to changing clothes and taking off my jewelry before starting this whole fiasco. 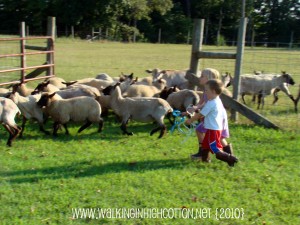 Ever heard the term "end run?" Well, these sheep are about to do an end run around to the left.

But the Ladybug’s silly but frantically real childish fear snapped me back to reality.  I called everyone into a family huddle and apologized.  Several times.

And explained the difference between tomatoes and tornadoes.

And gave them a brief local geography lesson to help them understand that we did not need to evacuate immediately to the nearest closet (since we don’t have basements here).

Then I sent them to “be my little soldiers and hold the line” at the fence. 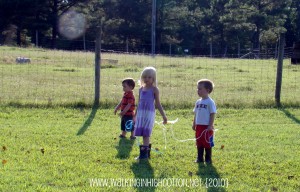 It's all about the teamwork.

Within 5 minutes of regrouping, everything was back in order. 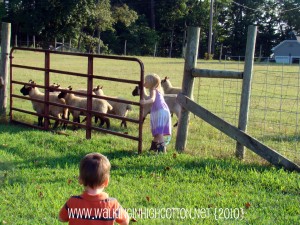 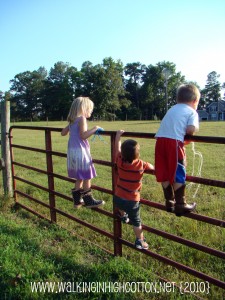 So I fixed some pb&j for the kids and took 5 minutes for mama on the porch. 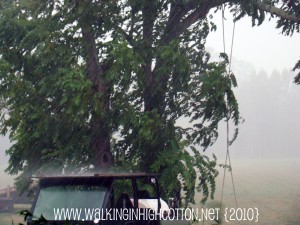 At least we definitely needed the rain.

Just like handling animals, children’s behavior is often a reflection of our own.  If we’re calm, they’re calm.  If we’re not, well they’re not either.  Sometimes it’s a painful image of imperfection staring back at you.  Parenting, in any capacity, takes courage.  And energy. 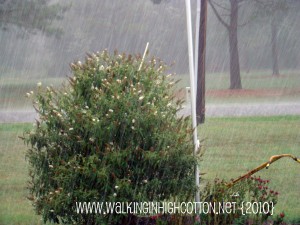 This certainly qualifies as a downpour.

And sometimes, a deep breath, an apology, a regrouping, and a second try.  That’s an example worth modeling.