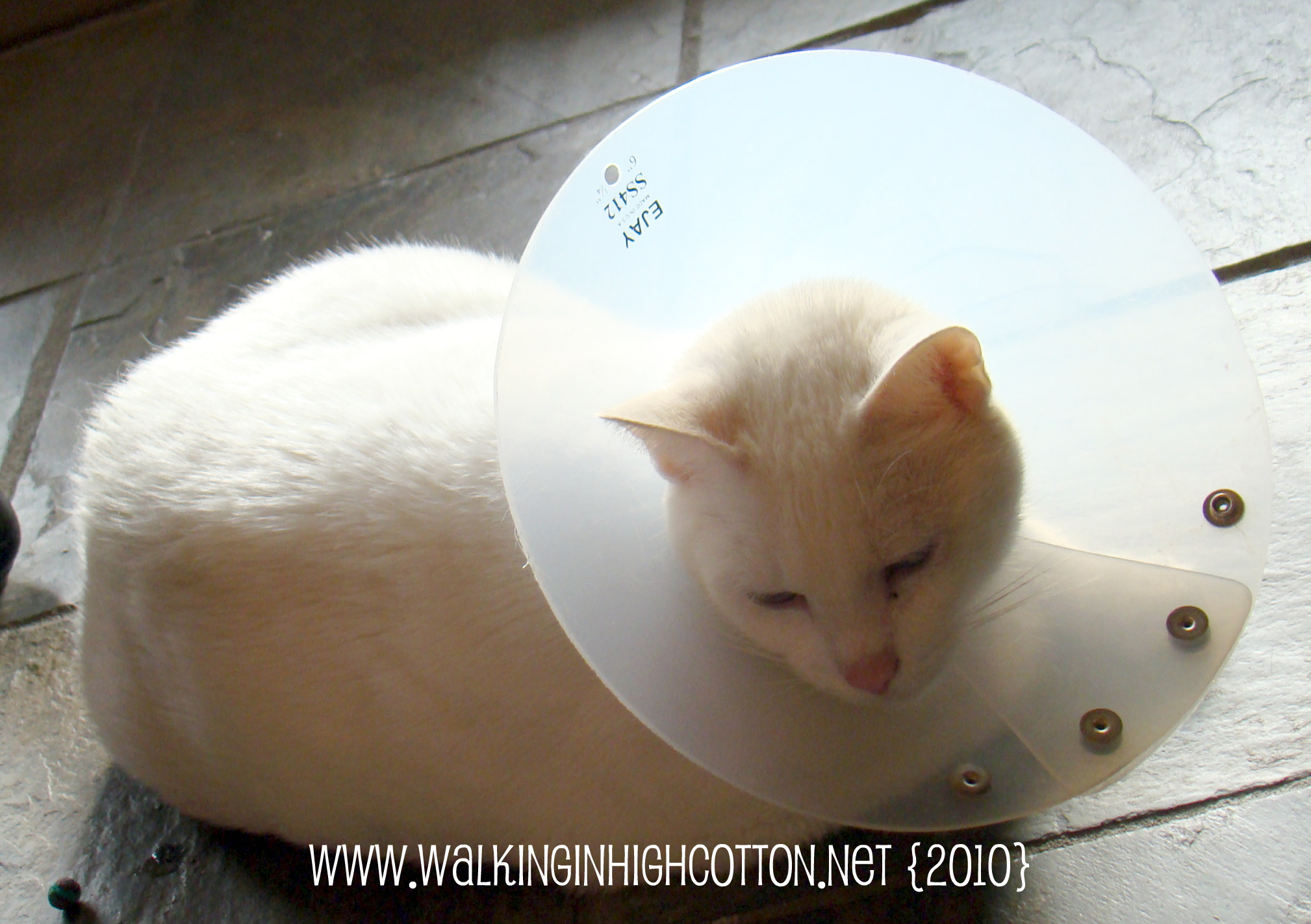 Our neutered, no front claws, bad depth perception, can’t even beat up a paper bag cat. But he apparently felt the need to go adventuring last week, slipped out and disappeared for a several days.  5 days in fact.  We were starting to scan ditch lines and speak in whispers to not alert little ears.  But he returned Wednesday evening, like this… 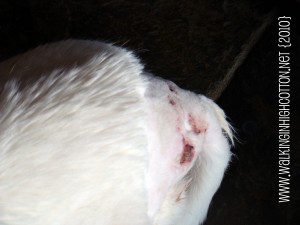 It was bad. Very bad.

Of course, when he got home it wasn’t shaved and cleaned and I can assure you that it was 120 times worse looking.  It was dirty, matted, oozing…but I don’t want any of you to get sick like I did, so lets just stop there.

1. We’re farmers and we’ve learned a lot about tending sick animals.  And we don’t charge ourselves $120/hr for the use of our skills.  So Mr. Fix-It wanted to get home from work and look him over first.

2. I walked out back and discovered that all our sheep had bloat.

Bloat is when animals eat very rich food and get gas (pretty much just like people).  However, if the animals can get the gas out, their stomach can swell so badly that they can’t breath and they die.  (I don’t know if this is like people or not.)  It’s serious.  Very serious.  Their stomach fills up with gas and  looks like they swallowed a basketball just behind their ribs on the left side.  I mean, it’s HUGE, and it’s very clear and distinct.

Ok, so emergency inside and emergency outside.  The PLAN?

Run around like a chicken with my head off until Mr. Fix-It gets home…

We’ve faced this situation before.  Well, maybe not this exact situation, but farmers are no strangers to health emergencies.  Unfortunately there’s certain aspects to farming that you just have to learn by experience.  Such as, sheep don’t just bloat on legumes.  They can also bloat on crabgrass 48 hours after a good rain.  I can pretty much guarantee that you won’t find that little tidbit in any sheep books.  And we have a pretty darn extensive farm library, folks.  (I’m a reader, what can I say?)

Fortunately, catching things early and knowing how to treat them correctly can save lives.  We’ve made leaps and bounds in this department.

Step 1. Wrapped the cat in a towel and locked him in the mudroom.  (Ok, step 1 was actually to call Mr. Fix-It, again, and demand his longitude and latitude, exact ETA–yes, I know that’s an oxymoron–and inquire if he thought the Coast Guard would send a helicopter to help him speed it up if I called them.)

Step 2. Put in a movie for the kids, make everyone go potty, fix a snack, and leave the Ladybug in charge with strict instructions to run out on the back porch and screaming for me if anything goes wrong.  (You have no idea how critical this step is for everyone!)

Step 3. Raid my kitchen for vegetable oil, baking soda, measuring cups and spoons, a whisk, and my Pampered Chef measuring cup mixing bowl.  Who knew a well-stocked pantry had any relation to doctoring sheep?

Step 4 was a 2 hour nightmare of forcing syringes (lots of syringes) of this foul water/oil/baking soda mixture down sheep throats that I don’t care to detail much closer.  Technically this is called “drenching.”  By the way, sheep don’t like it. 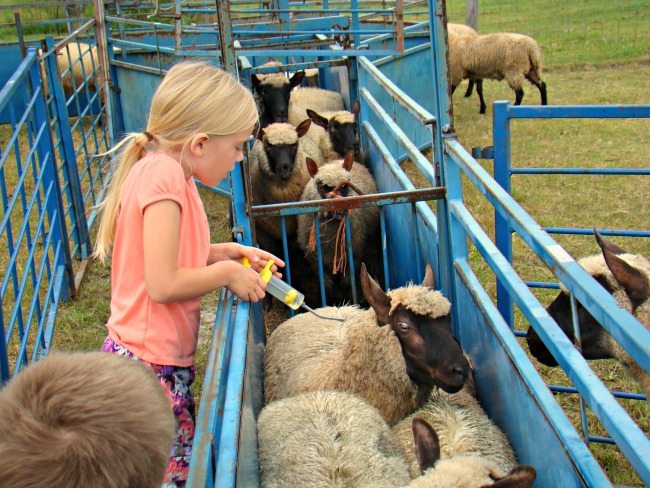 I don’t know what was worse–wrestling them to get it down, or them belching grass cud and baking soda back at me when it started working.   At least Mr. Fix-It took pity on me and took over the wrestling part after the first small group.  Those lambs have really grown!

But it worked.  We didn’t lose anyone.

That just left us Scratchy and his oozing issue.  We got the kids dinner and put them to bed.  I laid out my supplies, mentally reviewed my standard treatment strategy (cut, clean, disinfect, pack, wrap) and was all set to handle this too… 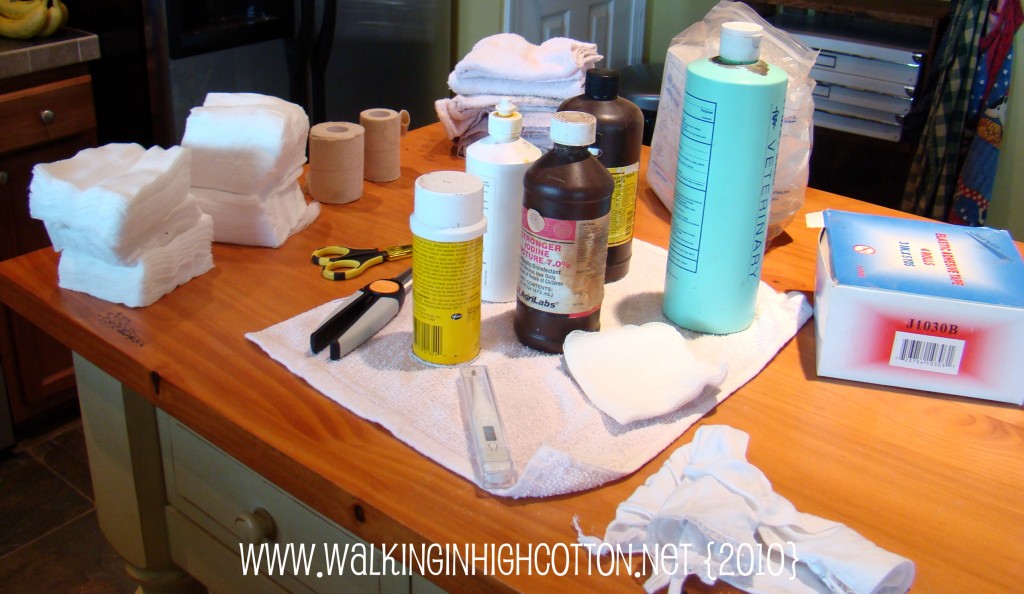 Ok, I was done.  This was our pet.  Our friend.  Our little white, furry, family member.  Besides, I’ve faced a lot of infection and grossness on the farm, but this was the worst smell ever!  So we talked numbers.

Surely there would be anesthesia, surgery, stitches, pain patches, antibiotics, overnight stays, cha-ching, cha-ching, cha-ching…Were we willing to sell our first born child to pay for the back half of our cat to be amputated and replaced with one of those attached wheelchair contraptions like that dog on TV?  Would his quality of life suffer if he couldn’t get his little wheeled-self into a covered litter box and had to go to an open box?  I mean, he really likes his privacy…

Ok, honestly, this was all me.  Mr. Fix-It laid out the new plan.  I could take the cat to the vet in the morning, he was going to bed.  I was not to agree to anything until they told us how much it would cost and what his chances of survival were.  There would be no wheelie-popping cats in this household.

Imagine my surprise when the vet told me that this was about a 3 out of 10 on the cat-fight-injury scale.  No surgery.  No stitches.  Oozing should continue for 3-5 days.  Go home.

How was the last half of your week?