We were at the beach for a couple days, so our first day out the kids were a little hesitant.  The waves were pretty big and strong–especially for those of us under 3 feet tall!  And they were new to this whole moving water thing.  Swimming pools don’t chase you and knock you down and suck you back in, ya know.  They played in the water (especially the Ladybug, who had better size on the boys) and mostly on the sand, running down to the edge to fill their buckets. 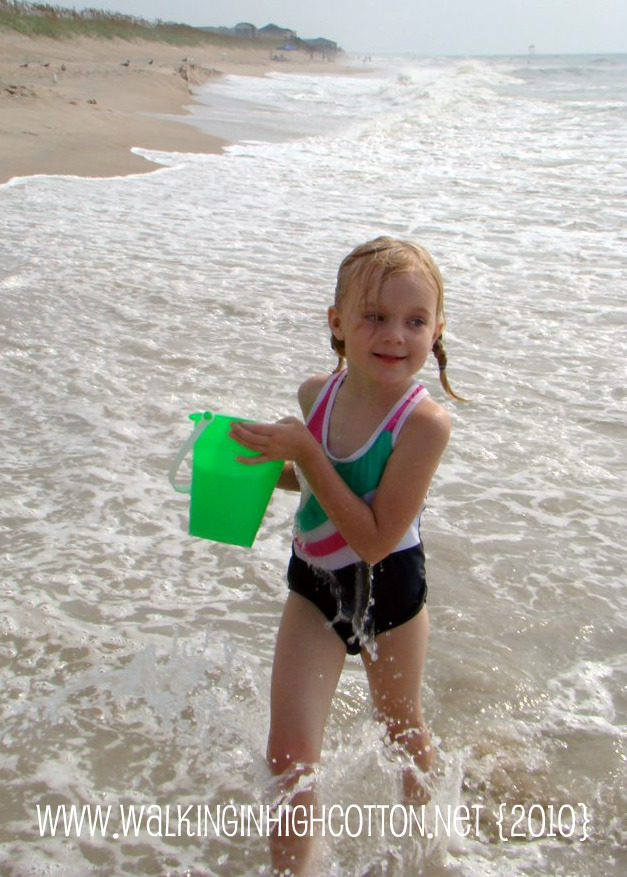 The Ladybug was more fearless than I expected. August 2010.

Then we went back to “the big water” on Saturday evening.  It was a whole new creature.  The water was warmer.  The tide was farther out with more cool wet sand to play on.  There were more seashells and sea glass and smooth pebbles to find.  And the waves were softer.  And smaller. 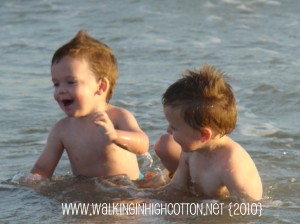 Speedracer and the Cowboy, August 2010. 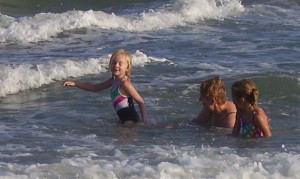 Shhhh...don't tell Mimi we posted a picture of her with the girls! August 2010.

Even Speedracer took a couple in the face and still hung in there. 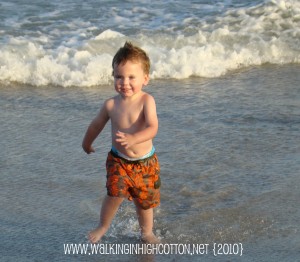 The Cowboy charged right in and started punching and drop kicking those wimpy waves. 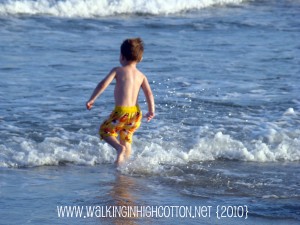 Those waves are darn lucky he didn't get to wear his boots! August 2010.

And all three of them frolicked like it was a giant bathtub. 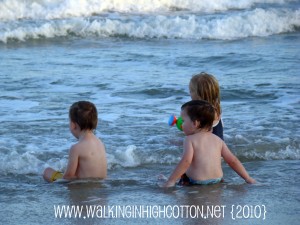 I have to admit, I’m not a big fan of the ocean either.  All my mother-fears probably stem (at least partly) from my own dislike of water that crashes into you, knocks you down, and tries to suck you back in while filling your nose with stinging salt water.  Not to mention all the…things…in the ocean that consider humans prey.  I enjoy being at the top of the food chain.  And at the beach, well, you’re not.  Believe me, I’ve seen beautiful sunsets a lot of places where you didn’t have to worry about this… 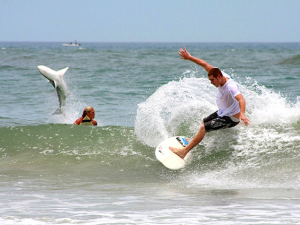 Thanks to www.fishingfury.com for the picture!

But Saturday night put all that aside for me too.  We all completely enjoyed it.  Mr. Fix-It was nursing his tomato-ness from the shore and was good enough to man the camera and even caught some wonderful video that I’m sure our family will treasure in the future. 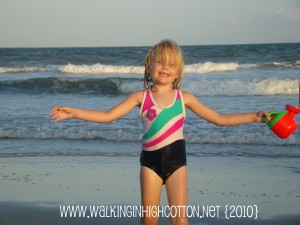 We got to see two new sea turtle nesting sites on the beach.  I would wow you with pictures but Mr. Fix-It had the camera and we didn’t think to take pictures of an empty square of sand roped off with plastic pink tape.  There was actually nothing to see except the sign saying it’s a $100,000 fine if you mess with them (“them” being the eggs you can’t see). 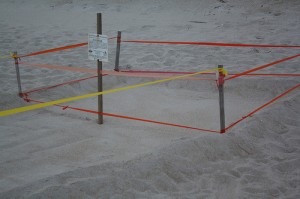 This picture is from last year on the same beach.  Our nests were staked off with pink tape. www.seaturtlehospital.org

And I’m not making that $100,000 up or being dramatic.  Apparently the whole island and beach is a sea turtle rescue and sanctuary and they really, really mean it.  Yeah, and I totally loved trying to explain to the Ladybug how sea turtle mama’s just lay their eggs and leave and never come back and it’s ok.  Yeah, that was fun.

Speaking of sea turtles, we did go to the Sea Turtle Hospital on Saturday afternoon. 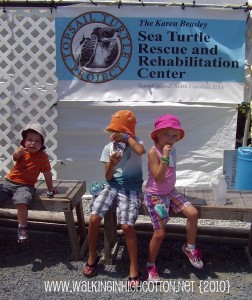 The wait wasn't bad...just enough time to refresh everyone.

We saw several different kinds of sea turtles that were being rehabilitated for things like a broken back/shell, an amputated flipper, and head lacerations with blindness.  Most of them seemed to be from boat-turtle altercations which the turtle didn’t win.  It was pretty interesting, but they don’t allow any pictures and Speedracer was having a T-O-T-A-L meltdown… 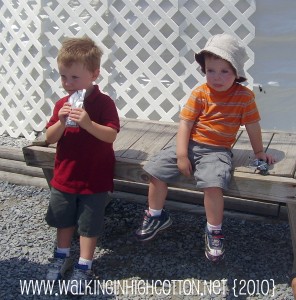 The Cowboy was just refueling, but Speedracer was tired and overheated and a juice box wasn't gonna fix it.  August 2010.

…So some of these pictures are from their website.  The kids were excited to see a Green sea turtle, which is the kind of sea turtle from Finding Nemo.  (Personally, I thought he’d be bigger.  I guess Nemo was smaller than I gave him credit for.) 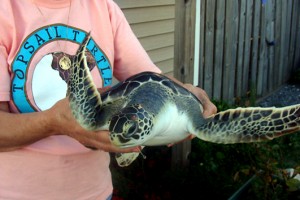 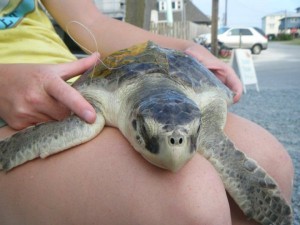 School starts in t-minus two weeks and counting and I am so glad that my sister-in-law and her Mr. M. invited us down to their special R&R spot to close out our summer.  So often you wonder if you’re actually creating memories for your kids.  Do you remember family vacations from when you were 3 or 4?  Well, I have no doubt our kids will remember this for a loooong time. 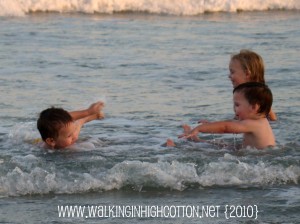 I know Mr. Fix-It and I will.  There’s nothing more fun than watching your kids have fun.  And if they ever forget–we’ve got the pictures to remind them!