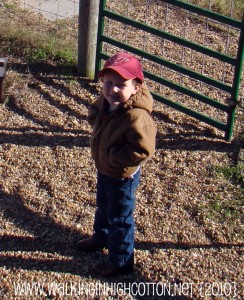 Truly, this guy's up for anything when it comes to the farm.

It was interesting to see their different reactions.  The Cowboy wanted to help with everything and got frustrated that he was too small and the work space was too crowded for him to be involved much, but he refused to go back inside–just in case Mr. Fix-It had a quick job for him. 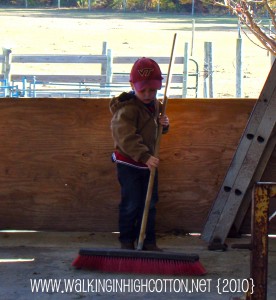 Speedracer, on the other, hand just wanted to hang out and play where everyone else was and besides saying “Ewww, Mama, that gooossss!” a few times, moved on as if it wasn’t even happening. 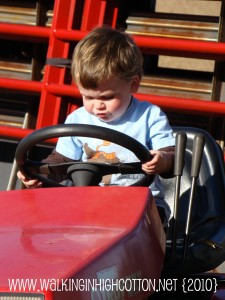 He just wanted to play on the equipment while Mr. Fix-It wasn't using it.

The Ladybug wrinkled her nose a lot, and pretty much stayed away from the processing section, but she was a big help when it came to chilling the birds and then drying them and bagging them. 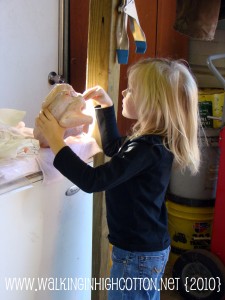 First you chill them in ice water. Then we air/hand dry them off.

She’s also very interested in the cooking part.  She loves to help in the kitchen. 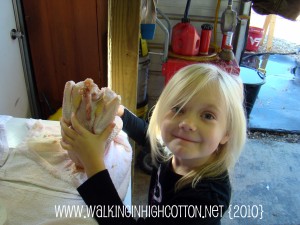 She was a little timid at first, but then got into her job.

I’ve noticed that the farm is very exciting for the kids because they can do “real” work.  So many of the chores they do are the same chores we do, not just busy work we made up to keep them…well…busy.  They might use a smaller bucket, but they’re feeding the chickens the same as I do.  They might have to use a stool (aka 5 gallon bucket) to check for eggs and reach the sink, but they’re gathering and washing the eggs the same as I do.  While this is great for them–it’s tough on me. 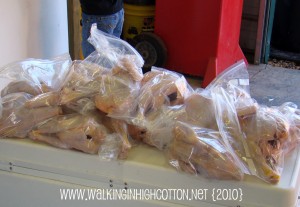 Then we bag them up, put a few in the fridge to eat fresh, and the rest go in the freezer.

Why? Because they can spot busy work from 10 miles away.

Anything that smacks of distracting them rather than a job that needs to be done sends them straight to Whining-ville.  Which is apparently home to Starving Town, Dying of Thirst Village, and Fake Coughing Central.  Which sends me straight to the City of Splitting Headache.  There’s nothing worse than having your hand in a dead chicken, scraping spongy pink lungs out, with a 3 year old yanking at your elbow pestering you about fruit snacks.  Nothing. 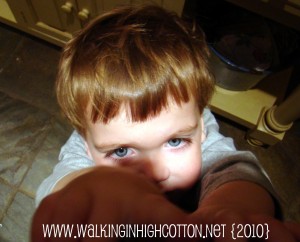 I do. not. fall. for those blue eyes every time. Regardless of what you might hear from Mr. Fix-it.

So here’s my question today, readers…What do you think “chores” should be for young kids?  Like the under 10 set.  I actually saw one of those chore/reward charts the other day that had brushing your teeth as a chore.  I don’t consider learning personal hygiene a chore we should be rewarding our kids for.  (Especially if you buy into the theory of giving allowances for doing chores!)  An important daily routine that they have to learn, yes.  A chore, no.  Here’s something else I’ve been wondering about…should we call them “chores” or something else?  Our kids do seem to prefer “jobs” but we tend to use “chores” as old-fashioned farm talk.

What do you use?