I recently got a list of books about raising boys from Honey Brown at the Sunflower Schoolhouse.  The good thing about having the farm (and a hands on husband) is that there’s plenty of ways for boys to productively express their masculine tendencies.  But other than being dirty and loud, the world of boys is a bit of a mystery to me.  So I’ve recently peeled through Raising Real Men by Hal and Melanie Young, Raising a Modern Day Knight by Robert Lewis, and What He Must Be to Marry My Daughter by Voddie Baucham.

I’ll save the book reviews for another time (they’re all keepers).  The bottom line is that single or married, if you’re trying to raise men, you need real, authentic men in your boy’s life.  By God’s grace, I’ve got Mr. Fix-It, and he’s got that covered. 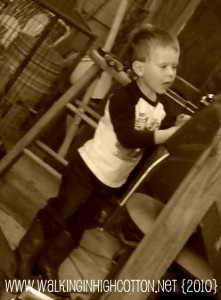 Around here, good boys get garage time with Daddy.

He’s been taking the Cowboy out with him a lot lately.  I don’t really know what they’re doing out there, but it touches something deep in my little guy’s heart. 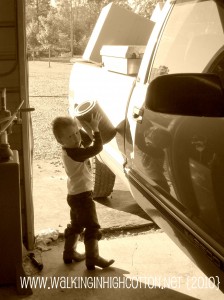 You're never too young to change an air filter.

He comes in every hour or two to get some juice and fruit snacks and heads right back out into that greasy, dusty, noisy world of toolboxes, air compressors, and men. 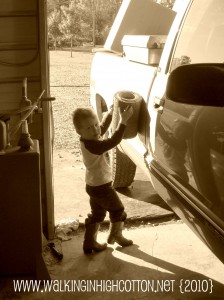 You might be a little small for the job...

When Mr. Fix-It takes him to the garage, he’s suddenly a little man.  He doesn’t like me to try and help him.  Or dust him off.  He even crinkles his nose at me if I ask for a kiss while handing him his fruit snacks. 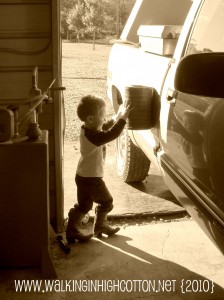 But part of becoming a man is not letting that stop you.

It’s probably better that way.  I’m sure seeing tears in my eyes would offend his little self-esteem.  I had no idea raising real men involved so much letting go.