While sifting through all the recent pictures I took at the Virginia Living Museum, I came across an interesting series.  It went something like this… 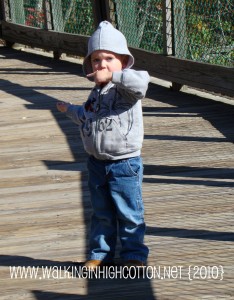 Followed by a disturbingly prone coyote… 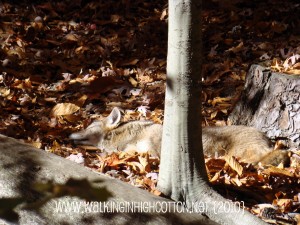 He’s just napping, but it got me thinking…

Yes, our boys both immediately said that foxes kill chickens and coyotes kill sheep.  It brings up an interesting question. How do we handle predator control?  Especially on a farm that strives to take a natural, holistic approach to things?  Diversity is actually one of the greatest indicators of whole system health. The more different species we see taking up residence, the more healthy our little ecosystem is, and the more balanced and resilient our little corner of the world is.

(Note: Some images further down may be disturbing if you like to think of the animal world as cute, fluffy and cuddly…)

We’ve had something get into our chickens a couple times and it’s upsetting. And messy. And you can’t imagine some of the disturbing conversations our kids have brought to their little friends at school! It takes food off our plates (and yours!) and money out of our pockets (and yours!). 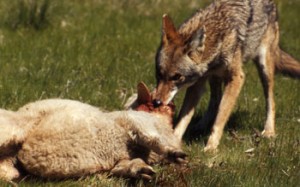 Any costs associated with predator control are eventually passed on to the consumer.  Either directly from the farmer, or through taxes which cover government payouts for animal loses like out West with wolves.  Or both! 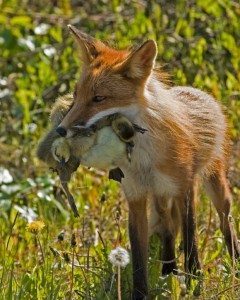 So what’s a farmer to do?  This is a real, serious problem.  But I’ve been shocked by some of the preemptive predator control measures used in the farming community.  There’s a regular column in one of our sheep magazines that discusses how to track down coyote dens and execute the pups before they’re old enough to come out alone. And there are entire websites dedicated to historic efforts to eradicate this or that species, completely, because they prey on livestock.  Look at the wolf debate out West. 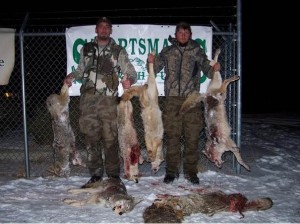 There’s a bounty on coyotes in our area.  It’s very old, but it exists.  There’s no “season” for coyotes because they’re consider a “nuisance.”  And yes, they’re in our area.  Other people have killed them.  Quite nearby (like right next door, nearby).  But no one has ever (I mean in recent history, I’m not saying never, ever, ever.) lost any animals to one.  No one has seen one harassing livestock.  No one’s shot at one that was attacking or even stalking their animals, or doing anything wrong, really. (Unlike some roaming dog packs around here that we’re not so free to “control.”) 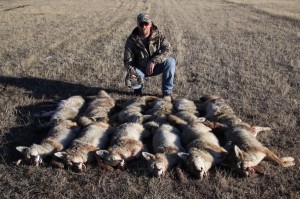 And what about skunks, raccoons, hawks and weasels? Or eagles? They’re protected here, but what about our lambs? We’ve had them swoop down on newborn lambs twice now. 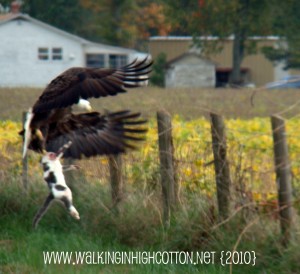 Remember these pictures? A newborn lamb is no bigger than a cat.

Here’s our take…Everyone’s innocent until proven guilty.  If they respect our space, our territory, our food supply, we’ll respect theirs.  We use pens, coops, fences, electricity, guard donkeys, observation and patrols of our boundaries to define our territory.   (Here’s some info on defensive predator control.) If they don’t respect our boundaries–our territory–then they’ve got to go.  Period. 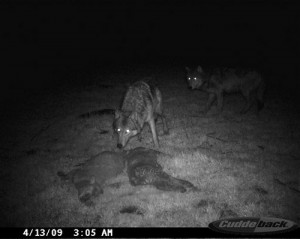 Wolves killing lambs in Oregon, 1999. AP Photo from Oregon Department of Fish and Wildlife, in article by Gary Bogue, Pets and Wildlife, 1999.

But just passing through is not a death sentence.  Stealing my dinner or destroying my property is.  Just existing isn’t. This generally mimics the natural order of things. Animals at the top of the food chain stake out territories, and defend against “invaders” that compete for their food and shelter resources.  But they don’t usually take the offensive and go out to pursue wholesale annihilation of their brethren. 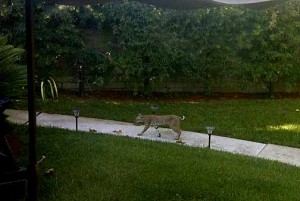 Recognize this predator? A bobcat strolling thru Irvine, CA in 2009. They’ve been spotted not an hour from us too.

Just a note: This is an operating philosophy based on our experiences to date.  And those are limited.  As  I mentioned, we’ve had small predator and eagle problems here (which limits our control options). While I do have an opinion on situations with larger predator problems, I like leaving room to change my mind.  I know how I felt when I saw that eagle swoop down on one of our little newborn lambs, so I can only imagine how I might feel if I ever see a coyote snacking on one of our sheep. But it’s hard to imagine hating another another animal with the fervor sometimes exhibited toward other predators just because they also see our food source as a food source.