This past long weekend,  we had some good times as a family. Unfortunately, not everything about last weekend was rainbows and ribbons. Farm life rarely is. {Note: The pictures below may be disturbing to people unfamiliar with the birth processes of animals, although I’ve tried to judiciously crop out some of the more…unsettling…aspects.}

It started out like good news. We were shoving everyone into their coats and hats and heading out to pick up a load of hay on Sunday when Mr. Fix-It looked out the back door and saw one of our cows in labor. If you’ve never watched an animal in labor, it’s sort of hard to describe. She was walking around the field by herself. Yep, that’s pretty much it. Walking around the field by herself. Trust me, it looked suspicious. 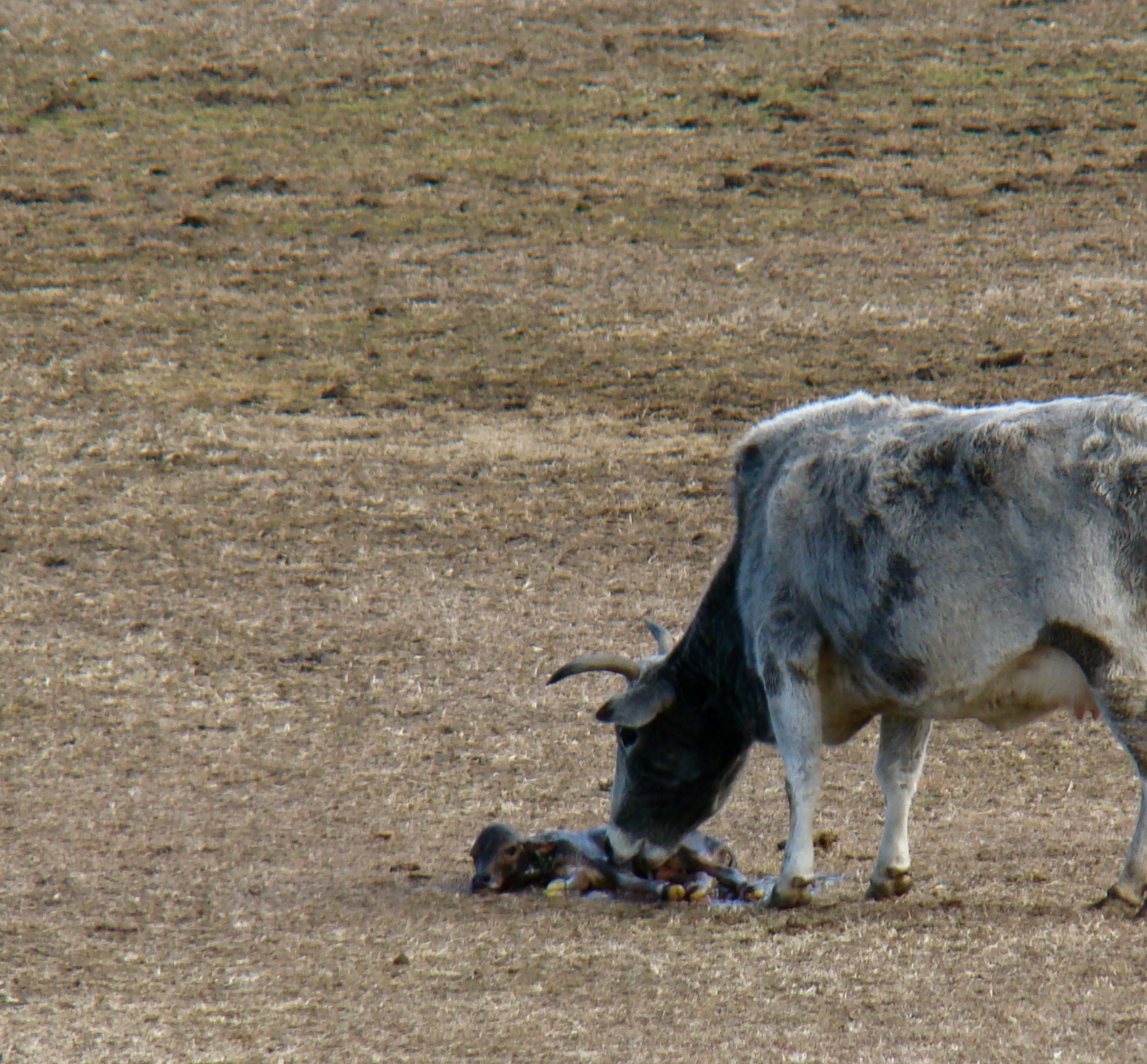 Then she laid down. Yeah, she lays down several time a day. They all do. But this was different. After laying there for a minute she rolled completely over on her side and almost onto her back and started rocking a little bit. Not a sound from her, but these were her contractions and her pushing. Then she got up and started walking around again. Believe me, once you’ve seen it a few times, you really get a feel for it. You see your animals every day, you know how they act all the time. You know who’s friends with whom, who hangs out together, and who’s acting strange. She was definitely in labor.

The whole crew gathered on the porch to watch as the little one came along. These are amazing, exciting moments. She was doing fine on our own and we have a strict hands off policy unless the mother shows specific signs of trouble or ignorance. Gray Abby is a pretty proven mother.

She didn’t have any trouble with the birth and was cleaning the little one off right away. When we saw him struggling up and spunky right away, we felt really good.

Several hours later when we finally got off to get our hay and got back, things had taken a bad turn. The little guy was cold and stiff and couldn’t get on his feet without help. Over the last couple years there’s been a lot of tricks we’ve learned. Sometimes from success and sometimes from failure. This one had failure written all over it. Heat lamps and vigorous rubbing, mineral supplements, bottle feeding, and even vitamin injections…we have a whole playbook to follow when things start going downhill, but none of them are guaranteed.

We lost the little guy Monday afternoon. Does it make me sad? Very. But my sadness is nothing compared to Gray Abby’s. A good mama cow or sheep knows she’s lost a little one. If you remove the body right away, she’ll cry. She’ll wander around looking for him. She’ll bawl out loud, calling for him. It’s the most heart-wrenching scene I’ve ever faced. We’ve learned to leave the little one with her for a few hours if at all reasonably possible. Does that sound gruesome?

I thought it was at first. I thought it was laziness on the part of the farmer. Maybe for some it is. But working away from the farm all day, we discovered something. Something just a little bit amazing. The mother doesn’t seem to understand right away. She stays by the little one’s body–right by it. She won’t go eat, or get a drink or anything while she tries to get it to get up and come with her.  If you remove the body in this first hour or two she gets very confused and starts crying and carrying on over it. Like weaning time. She thinks you took her baby away. But if you give her an hour or two to come to realize the truth on her own, she will be calmer. Once she understands that it’s passed away, that it’s not getting up, she’ll leave it on her own and rejoin the herd.

I think it’s God’s gentle mercy for animals, this healing. This moving on. This forgetting. So often we rush through our grief, thinking that will help us get over it. Really, the denial just makes finally facing the pain that much more intense. Sometimes we need time to sit and absorb our loss. Time to face it, before trying to moving forward. God knows there will be heartbreak in our lives, but He’s willing to extend His mercy to us if we’re willing to stop and acknowledge our need.

It’s a truth I spent a lot of time running from since 2006. But you know what? Grief makes it’s own pace. You’ll never outdistance it. It makes years into moments and moments last for lifetimes. We fight it tooth and nail and refuse to be strong enough to admit our weakness in it. We flounder around in anger and hurt and pride, as if those will somehow replace Grief without us having to fully face it. They don’t. Grief is sitting there on the other side of bruised relationships and broken hearts, still waiting. Thankfully, I have found that His mercy is new every day.  Often the worst moments of farming–of living–can become my greatest moments of truth–if I will just let Him in.