I don’t think I ever shared these pictures. 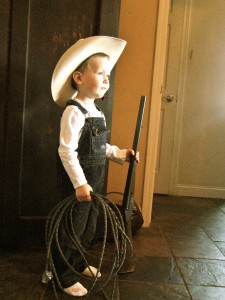 The Cowboy, in true John Wayne movie fashion, got a shotgun for Christmas (although it took until January to get it here). It’s not, quite, a real one–which would be too heavy for him to even lift. But it’s a serious one, with a serious purpose. 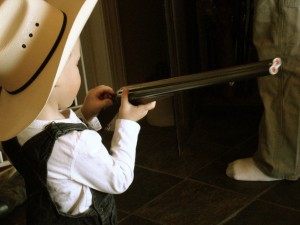 It's got all the important parts, even if it doesn't have the size of a real one.

It’s a “training” gun with all the same parts as a real one, but the plastic shells don’t actually shoot out. (We don’t do projectiles here. It’s just a matter of my own little need for sanity.)  Mr. Fix-It looked long and hard to find one that had caps though, so if you do pull the trigger, you know it. 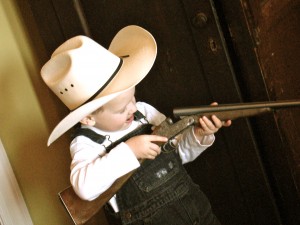 He already looks like he knows what he's doing.

It’s actually made for kids 4 and up, but it’s a tad bit too long for him to hold correctly yet. And it’s not plastic so it’s not light. It’s a little bit lighter and shorter than a real one would be–just enough that they can actually handle it to learn with. Mr. Fix-It’s teaching the Cowboy and the Ladybug how to handle it safely, load and unload it, and clean it. (I said Speedracer had to be 4 before he could join in and he’s still not speaking to me because of it.) We keep it locked it in the gun cabinet with the other guns. 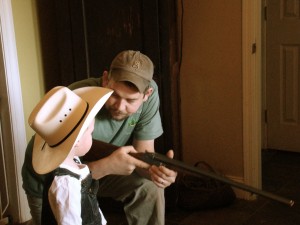 Only his first lesson was in the house. He just couldn't wait.

We don’t have play guns here. We have lincoln logs, chip clips, a flashlight, and parts of an Erector-set crane that shoot at bad guys, but we don’t have actual toy guns. Rule #1 around here is that guns are tools, not toys. 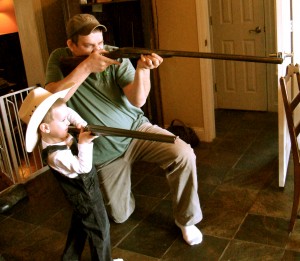 He's got a little growing to do.

Rule #2 is “ask your father.” This is one of those parts of motherhood for me where Mr. Fix-It gets to be the father and I get to grin and bear it and go bake some muffins with the little guy so I don’t have to watch. I have no desire for our kids to grow up either fearful or curious about guns, but rather knowledgeable and conscientious. Guns are tools. Important ones around here. Just not ones I happen to like dealing with if I don’t have too.