Can I tell how excited I am to share my sister’s Baptism with you? I could, but it would be like 7,000 words long and you would be bored to death reading it.

Instead, she agreed that I could just post her testimony from last Sunday here and you could read it yourself. I know it’s l-o-n-g, but I’m sure afterwards you’ll understand how amazing it has felt to see her lay her old self down and come up again as a new creation in Christ.  ~Jamie

My name is Beckie Conroy.  I was born and raised in Falls Church VA with my parents and my older sister.  My parents were very loving and affectionate people involved in almost every aspect of our lives and helped us make many important decisions.  We were very lucky to have such a close family.  I remember many of my friends telling me that they were jealous of us.  I never understood why, I thought we were just like every other family, but when I got older I realized that wasn’t the case.  Many of my friends lived in single family homes, they had no curfews, and their parents didn’t care about their grades or friends or any of the things my parents seemed to me to care too much about.  Having my own children, I now understand how lucky we really were. 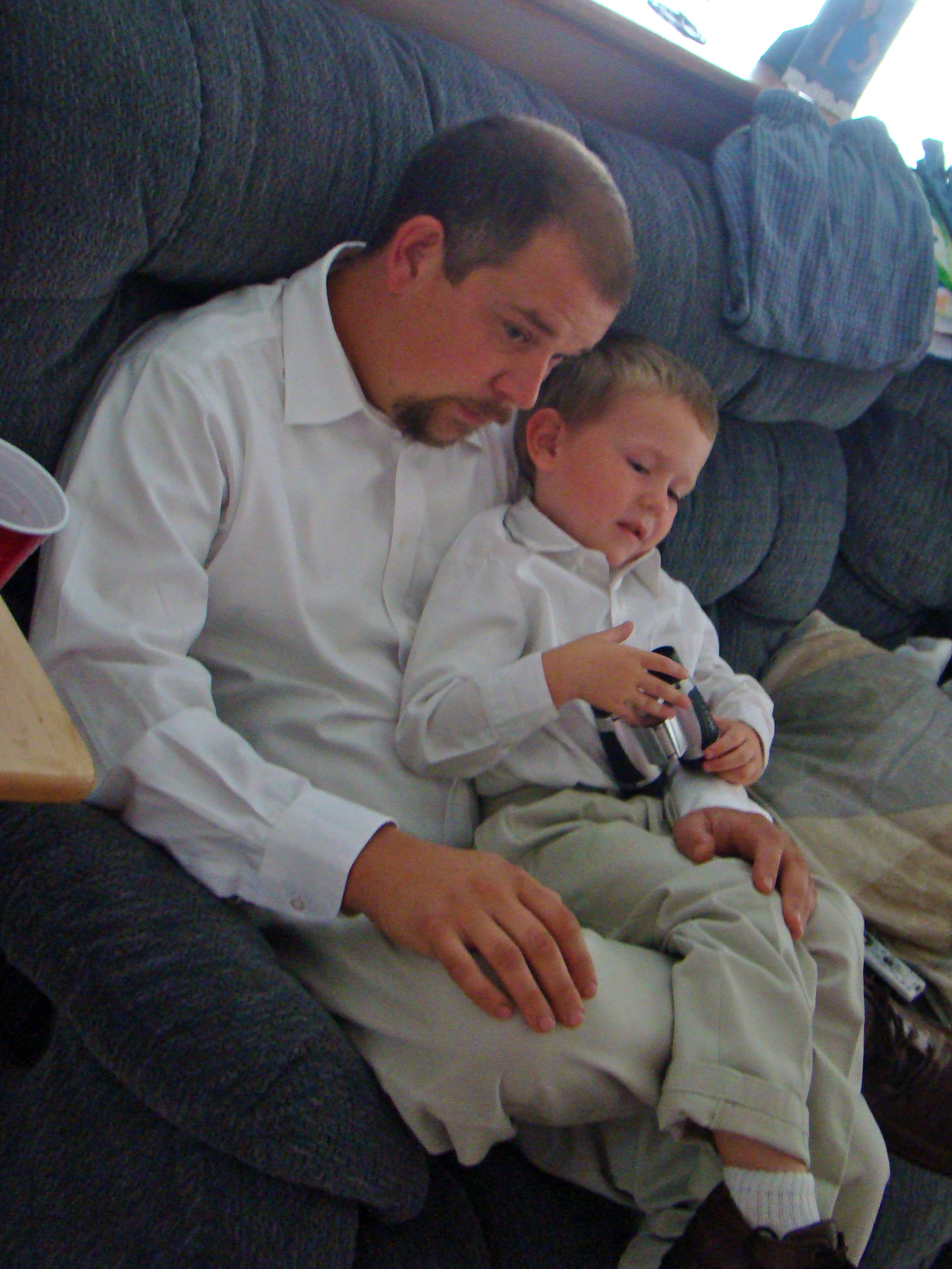 It took a little while to get everyone dressed and out the door Sunday morning.

As for our spiritual upbringing, my mother was Catholic and my father Lutheran.  At some point during their marriage they agreed to raise us Catholic.  My sister and I went to church (most) every Sunday, we went to CCD class, we were baptized, participated in first communion, and were both confirmed Catholic.  After confirmation, I don’t remember going back much at all.  Of course we went on Christmas Eve, and Easter, but other than that, I did not have a relationship with God at all.  I don’t really think I ever did.  I don’t remember praying on a regular basis, and as ashamed as I am to say it, I don’t ever remember even opening my bible.

In 2002 when I was 20 I married my high school sweetheart, and by 22 we had our first child.  When our Son was born, my husband (who is not a believer) agreed that I could raise him Catholic.  My husband had never been regularly exposed to Church as a child, but he was very supportive of my decision to have our Son baptized and start him on a Christian path. At that point in my life it was very important to me to get back into the Church and for once, take it seriously.  So, we had our Son baptized and never went back, (so much for that taking it seriously thing.)

By the time I was 24 life was great, my husband and I had good jobs, we had one child and another on the way.  Things were right where I always thought they would be.  But I still hadn’t found my way back to Christ. 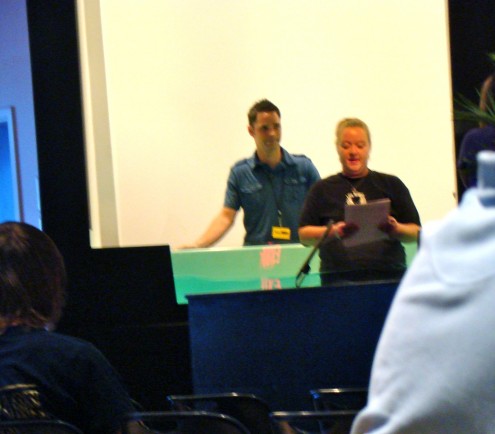 I was pretty nervous about taking pictures in church, but they said it was ok.

In April of 2006 I was laid off from my good job, and then in May of 2006 my life would forever be changed.  On Saturday May 20th I was sleeping in bed with my sweet baby boy when my phone rang, I will never forget it was 9:59 PM.  The person on the other end of the line said that she was calling from the Fairfax Hospital ER my Mom and Dad had been involved in a very serious motorcycle accident and I needed to get there right away.  When I got there, the doctors notified me that my Mom had died on the scene.  My mind started racing, this must be a mistake things like this don’t happen to families like ours.  God would save them right, this can’t be their time, we still need them.  I have so much more to learn, so much more I need their help with.  Well, that was not up to me to decide.  Less than an hour later, my Dad was gone too.

In a split second my world was devastated and my heart shattered into a million pieces.  Why would God do this to us?  What had we done that would have ever made us deserve this?  We went from picking out baby names and planning a baby shower to picking out flower arrangements and planning a double funeral. 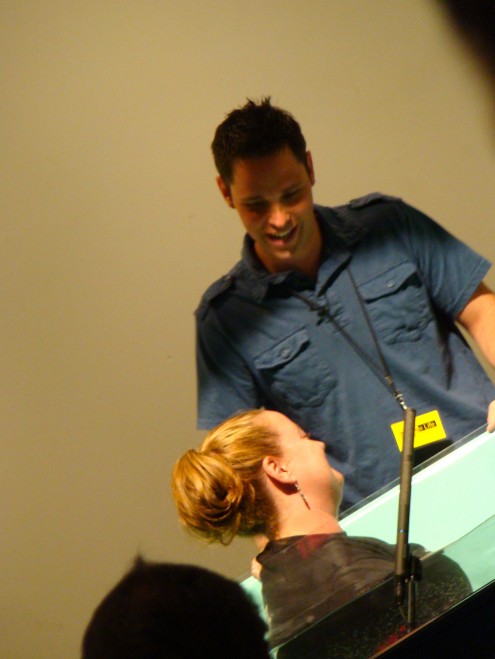 My eyes were a little blurry, so I couldn't tell if the camera was focused or not.

I was lost, hurt, and angry.  In that moment, I had decided that everything I had learned in church and CCD all of those years was wrong.  God and heaven were just things that people said to make grieving people feel comforted.  And I was NOT comforted.

I yelled at God and I cried to God and I even told him that I hated Him.  One day while I was crying to my Aunt and telling her all of the things I was feeling and saying to God, she reminded me that even though I was yelling at him and fighting Him, I was still talking to Him.  Sounds crazy right? How could I be yelling at someone that doesn’t even exist?  Who sounds crazy now?  It was in that moment that everything started to change. 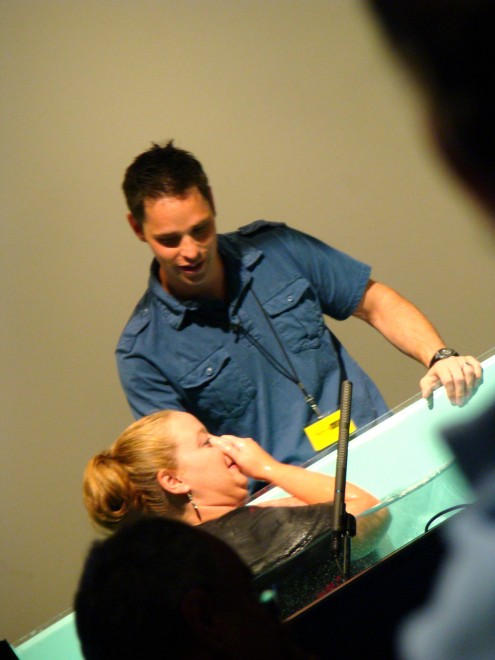 This was our family's first baptism by emersion, I think. First I've seen, anyway.

It was a VERY slow process.  But through everything, a very close friend of mine, continued to reassure me that even though it hurt so bad, He was still there.  He didn’t do this to ME, He did this because He is God and he needed them for something, He had a plan for them and for me.  They were in a better place and I should rejoice and take comfort in that.  Well, anyone who has experienced tragedy like that knows that is much easier said than done.

As everyone was returning to life as usual, I was stuck, I was still deeply grieving, and I didn’t know if I would ever really live again.  As the hours turned into days and days into months and then years, I began to reflect on the past.  I thought about all of the things I had learned over the years about Faith and God and love.  And then one day, it just clicked. 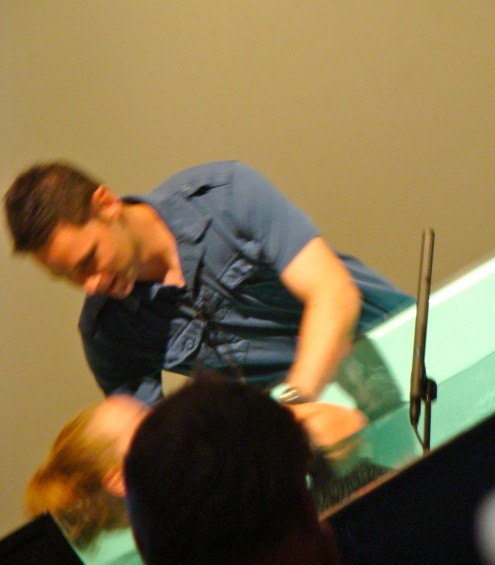 She told me the water is heated.

If I wanted to understand God, I needed to have a real relationship with Him.  I knew that I would never get the answer I was looking for (which was Why?)  But I knew that I would find something better. …. Eternal life, peace and comfort in knowing that I would be reunited with them someday.  Being raised Catholic and being a true Christian or, follower of Christ were very different things to me.   Yes I went to Church and Sunday school, but I would NOT have considered myself a Christian.

I went to Easter service with my Sister a couple of years ago, that was the first time I had been to Church voluntarily since the accident.  The moment I walked in, I could feel Him, I mean really feel Him.  It was like when people talk about God wrapping his arms around you, I felt that.  He was there, and He was with me.  I cried during the service that day. 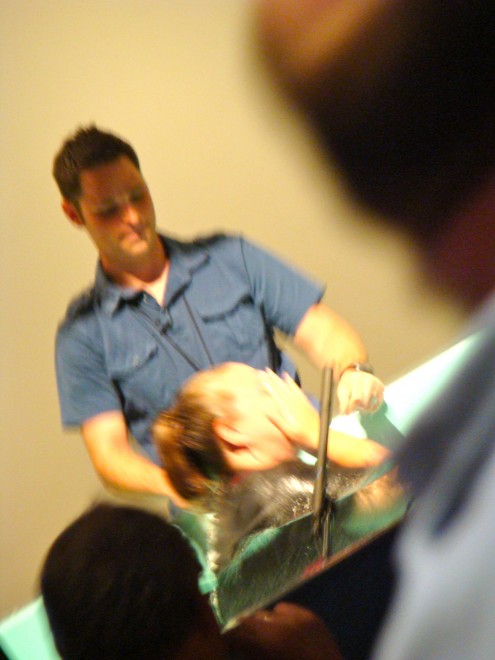 I suppose you wouldn't want your followers coming up as new creations with hypothermia if you could avoid it.

When I came home, I found New Life community church and I’ve been coming here ever since.  The first 4 or 5 times I came to service here, I cried the whole way home.  I felt the pain from all the years that I had rejected Him and at the same time I felt the love He was giving me.  I could feel Him telling me that He still loved me and that he understood my pain.

That was the moment I knew I was saved.

That was when I realized that through all of my grief and all of my anger He had been there, holding me and helping me through.   I was forgiven.  Forgiven for rejecting Him and forgiven for the anger I had felt towards Him.  He made me the way I am and He knows me better then I know myself.  I am His masterpiece, I am beautifully and wonderfully made.  All of those people who told me, “God has a plan, trust in Him,” were right.

I don’t know the whole plan, nor should I, but I know that things happened the way they did for a reason.  At the time of the accident, my sister and I were both pregnant, I had a little girl, and she had a little boy.  Honestly, I was so angry about that.  Angry that they couldn’t share these moments with us, angry that they would never meet those sweet babies.  But sometimes I feel like that may have been part of the plan.  I honestly believe that if I hadn’t been pregnant and had a little one at home, I would have completely shut down.  I could have been drinking or using, or just not functioning at all. But I had to, I had to for my 2 year old son, and I had to for my unborn daughter.

Romans 5:1-4 says “Therefore , having been justified by faith, we have peace with God through our Lord Jesus Christ.  Through whom also we have access by faith into this grace in which we stand, and rejoice in hope of the glory of God.  And not only that, but we also glory in tribulations, knowing that tribulation produces perseverance; and perseverance, character, and character, hope. 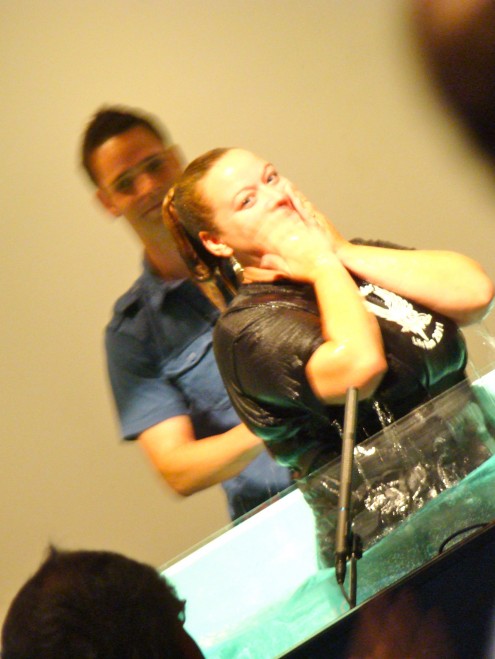 "That Christ may dwell in your hearts by faith; that ye, being rooted and grounded in love, may be able to comprehend with all saints what is the breadth, and length, and depth, and height; And to know the love of Christ, which passeth knowledge, that ye might be filled with all the fulness of God." Ephesians 3:17

Today I have a great relationship with the Lord.  My husband and I had gone through some very tough times since the accident and our marriage is in a better place now than it has ever been.  I am proud to call myself a fully devoted follower of Christ.  Having an active relationship with Christ has changed my life in so many ways.  I feel alive again, and I live with the peace of knowing that He holds my Mom and Dad in His arms and takes care of them in ways no one else ever could.  I KNOW that I will be with the Lord when it’s my time, and I will be reunited with my parents when He calls me home.  Finding New Life community church helped me find my way to Christ, and Christ has helped my find my way to a new life.

If you have any questions about something you’ve read here, (or need me to send you a box of tissues!) you just leave a comment and I’ll be glad to get right back to you. The world can be an ugly, hateful place, but the freedom found in Christ is available to everyone.

“The Lord is not slack concerning his promise, as some men count slackness; but is longsuffering to us-ward, not willing that any should perish, but that all should come to repentance.” (2 Peter 3:9, KJV, bold added)