Can I tell you something? Can I admit something as a 32 year old wife and mother of 3? As a woman who’s been married for 10 years?

Well, actually, I can a little bit now. But it’s a pretty recent development.

If you ask Mr. Fix-It what in the world we ate before about 2005, he’ll just shake his head and say “A lot of mac and cheese.” 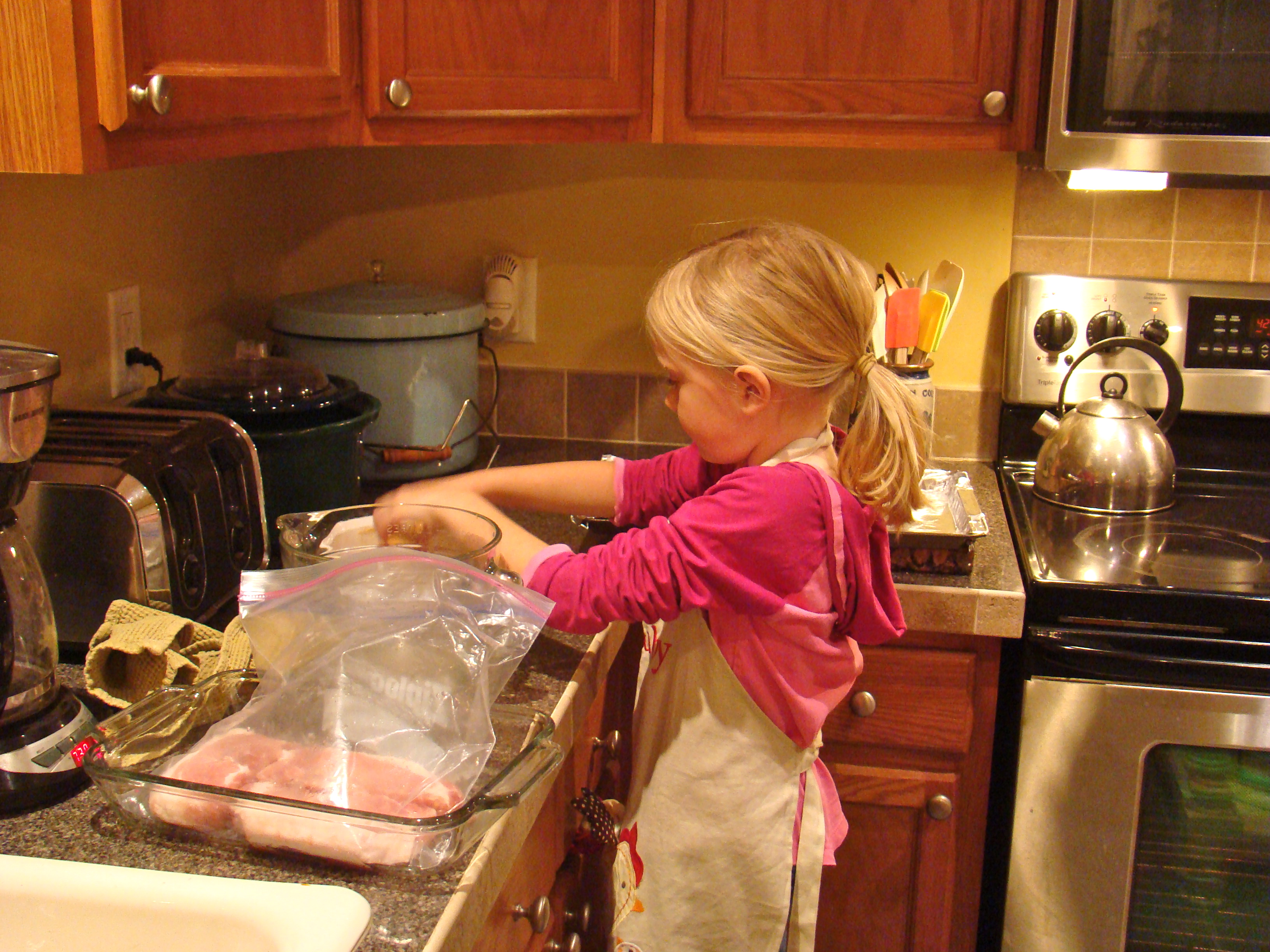 My girl made pork chops the other day.

I don’t intend for that to be my daughter. (Or my sons, actually.) 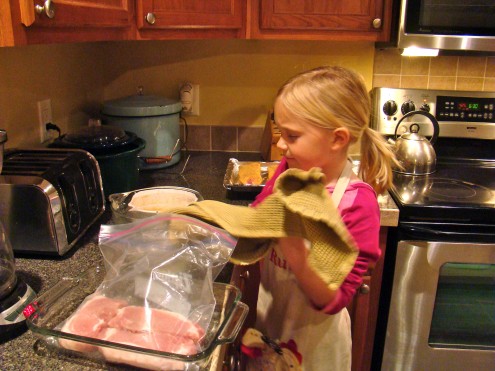 I’m not a great cook and I don’t really enjoy cooking like some people do. I’m not an adventurous cook or a creative cook. I have no idea what a leek is and I’m not completely clear on the difference between red-skin potatoes and regular potatoes. (Raw or cooked, they taste the same to me.) But I’ve learned how to follow a recipe. 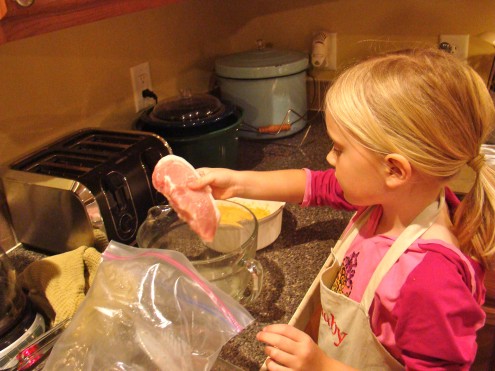 I showed her how to do the first one and she rolled on by herself from there.

A lot of this came about because of the farm. If we’re going to grow it, I need to know how to cook it.

And a lot of it came about after the Ladybug was born as God began to move my heart to take up true home-making–which includes cooking. A lot of cooking. (And cleaning, but that’s a whole other post!) 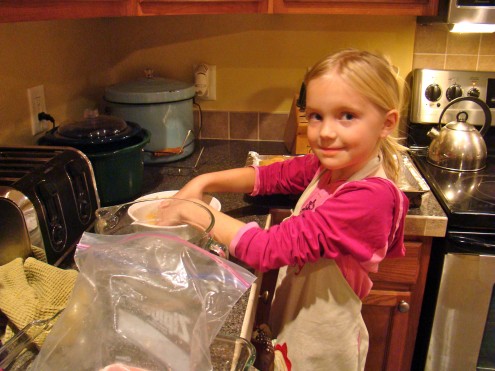 She wasn't even very squeamish about it. I was, but I didn't let it show.

I’ve set out this year to start teaching our kids, especially the Ladybug, how to cook and get comfortable in the kitchen. So far it’s going pretty well. 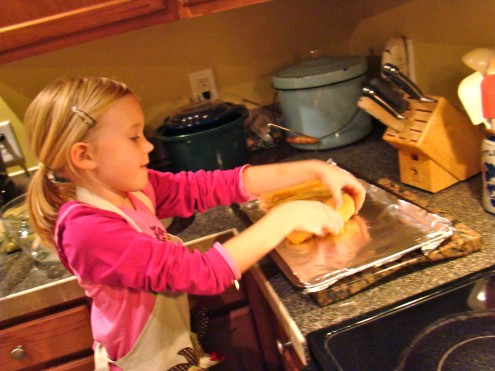 I don't talk about not liking to cook around the kids. I don't want them to pick up any negative vibes.

I’m not sure how you would go about this sort of like-skill training in an organized way. We’re just sort of tackling it by immersion. I just bring one of them along side of me while I’m making something and let them help with whatever steps I think they can handle.

Speedracer is lagging a little bit because he thinks everything is “gooossss!” if it sticks to his fingers. But I think he’s got some time to come around. {grin} 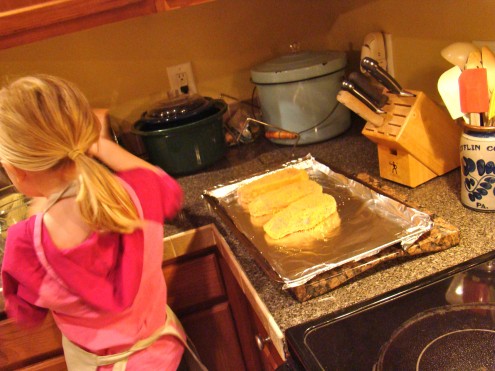 I'm still terrified of her burning herself. But I've survived burns plenty of times, so I'm trying not to let fear rule the day. I just know she's a little klutzy (like her Momma!).

The Cowboy is quite the little baker and the Ladybug is now allowed to help on the hot stovetop and put things in and out of the hot oven. (Shhhh…I’m excited to put together a little cooking Christmas package for her!) 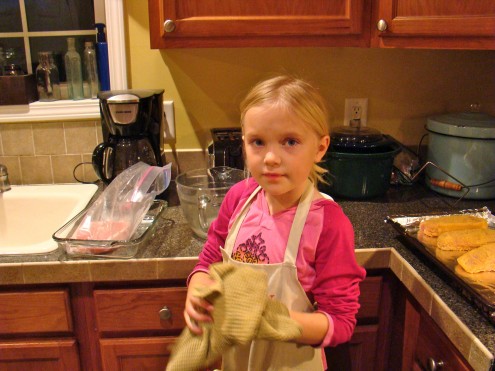 She's got plenty of aprons, so I'm thinking pot holders and maybe her own spatula, wisk, and tongs.

Our kids might not know how to do everything by themselves at first, but they are excellent at following directions, so they’re catching on quickly. And they love to take credit for whatever they helped with! Although, you know that thing where they suggest letting picky-eaters help with the cooking and then they’ll want to eat it because they helped make it? Speedracer’s sunk that theory. He’s willing to help, but he still doesn’t eat anything but bread, yogurt, and peanut butter.

Do you have any ideas for a picky-eater?