A mere three days before it was 15°, it was New Year’s Day and a balmy, sunny 59°. Mr. Fix-It was changing the spark plugs in our poor, overworked and under appreciated GMC, while I cleaned the kitchen and the boys were upstairs beating each other up with light sabers and throwing legos at each other and fighting over who’s remote control was actually controlling the remote control truck…when I heard that one word…

You know, that one final word that sends you over the edge into Momma-Gone-Crazy mode. It could have been “No–you die!” or “You hit me in the eye!” Maybe it was “No, you did it! No you did it!” Or maybe it was just the constant repetition of “STOP copying me!”

What ever it was, I made them all pack up and TAKE. IT. OUT. SIDE. 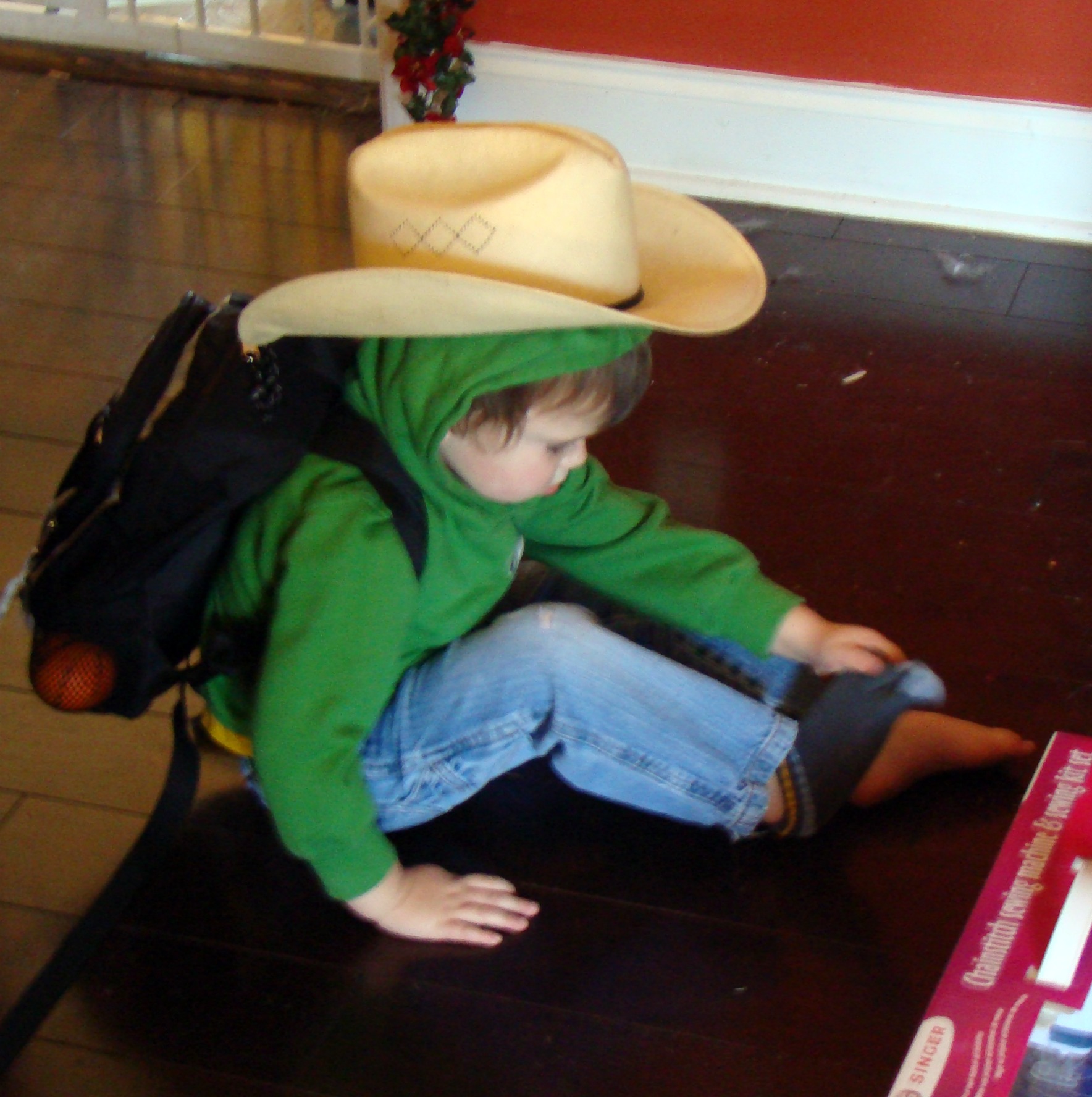 It always takes Speedracer a little longer than everyone else to get himself ready to go.

Little did I know they were actually going to pack before leaving. 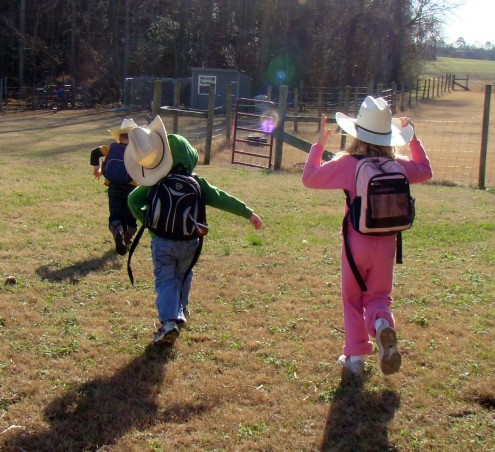 It was a little breezy. The hats were a problem the whole afternoon. Especially for my little guy.

Apparently they were Secret Agents. And according to the Ladybug, Secret Agents don’t use guns. But they do use backpacks full of dinosaurs, Squinkies, and horses, along with a few plastic rocks and neon green trees, just in case. 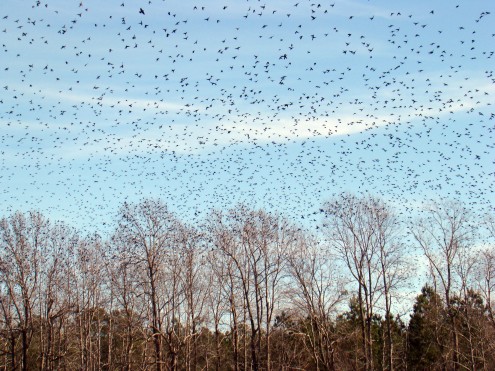 I heard the Starlings as soon as we opened the door.

And flashlights. No Secret Agent adventure is complete unless everyone has their own, operational flashlight. 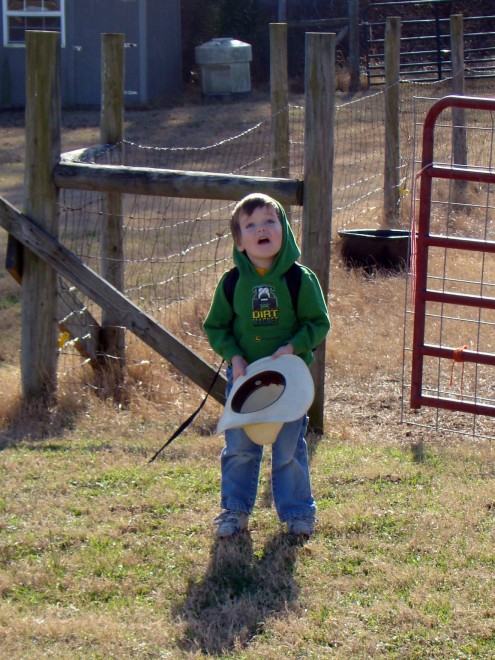 The kids were blown away by the lift off.

Now I’ve watched the Bourne trilogy several times and I’ve never seen anyone disguise themselves by wearing a cowboy hat and pink sweatsuit with glitter hearts on it–but I bet he could have made use of that backpack full of Squinkies if he had too! 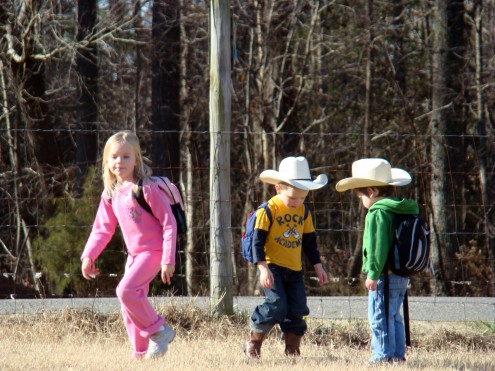 The Ladybug gave up on her hat almost immediately as too much trouble. The boys were a little more stubborn about them.

I also had no idea that the Starlings would be flocking.

I ended up staying out with them and getting a bunch of pictures rather than finishing the kitchen. Apparently I needed a breath of fresh air too. After about 20 minutes I went back in the house feeling relaxed and calm again. No more Momma-Gone-Crazy. 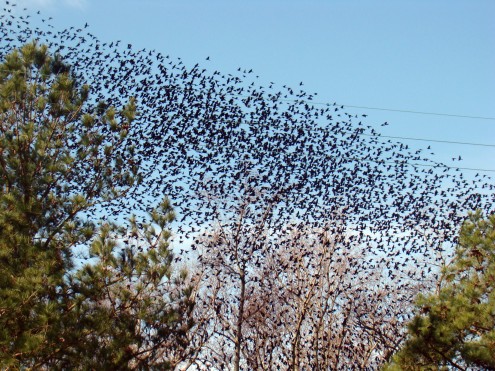 There were just hundreds and thousands of them.

And thankfully we couldn’t hear the birds squawking from inside our house. Outside they were really loud! When you multiply that “tweet, tweet” by a 100,000, it is not the same sound at all. It’s cringe inducing! Almost like very shrill screaming. 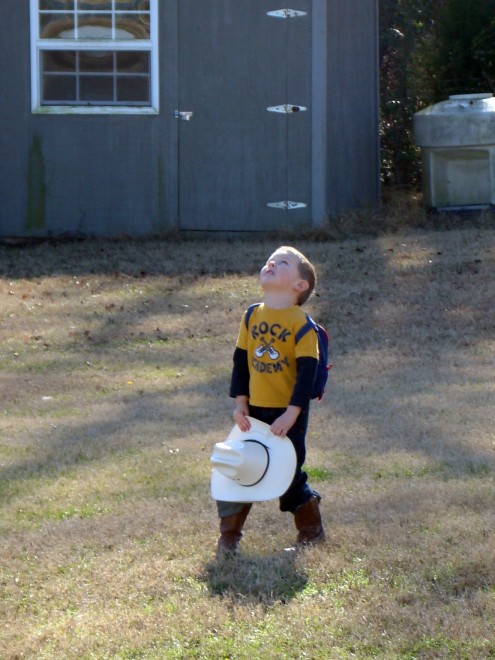 It took several minutes for them all to swoop over from one side to the other.

The kids actually thought they were chasing them back and forth. Well, I think maybe the Ladybug knew better, but she’s a past master at convincing the boys to play her games. 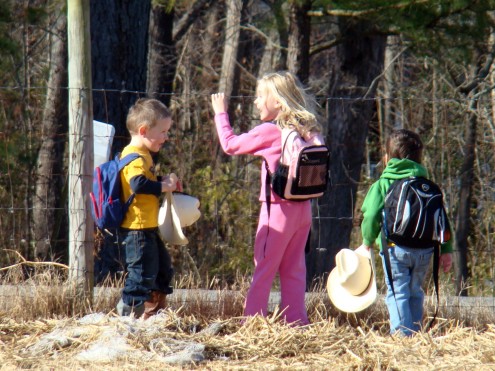 I'm so glad we have fences! They create perfect boundaries.

They stayed out for several hours that afternoon. I dragged them out kicking and screaming at about 10 am, and I finally had to bribe them with lunch to get them back inside about 2:30-3:00.

And I did get the kitchen clean, but it only lasted until dinner time.