Part of our time off yesterday involved getting out in the fresh air and flexing our muscles. The ones in our arms and the ones in our heads. 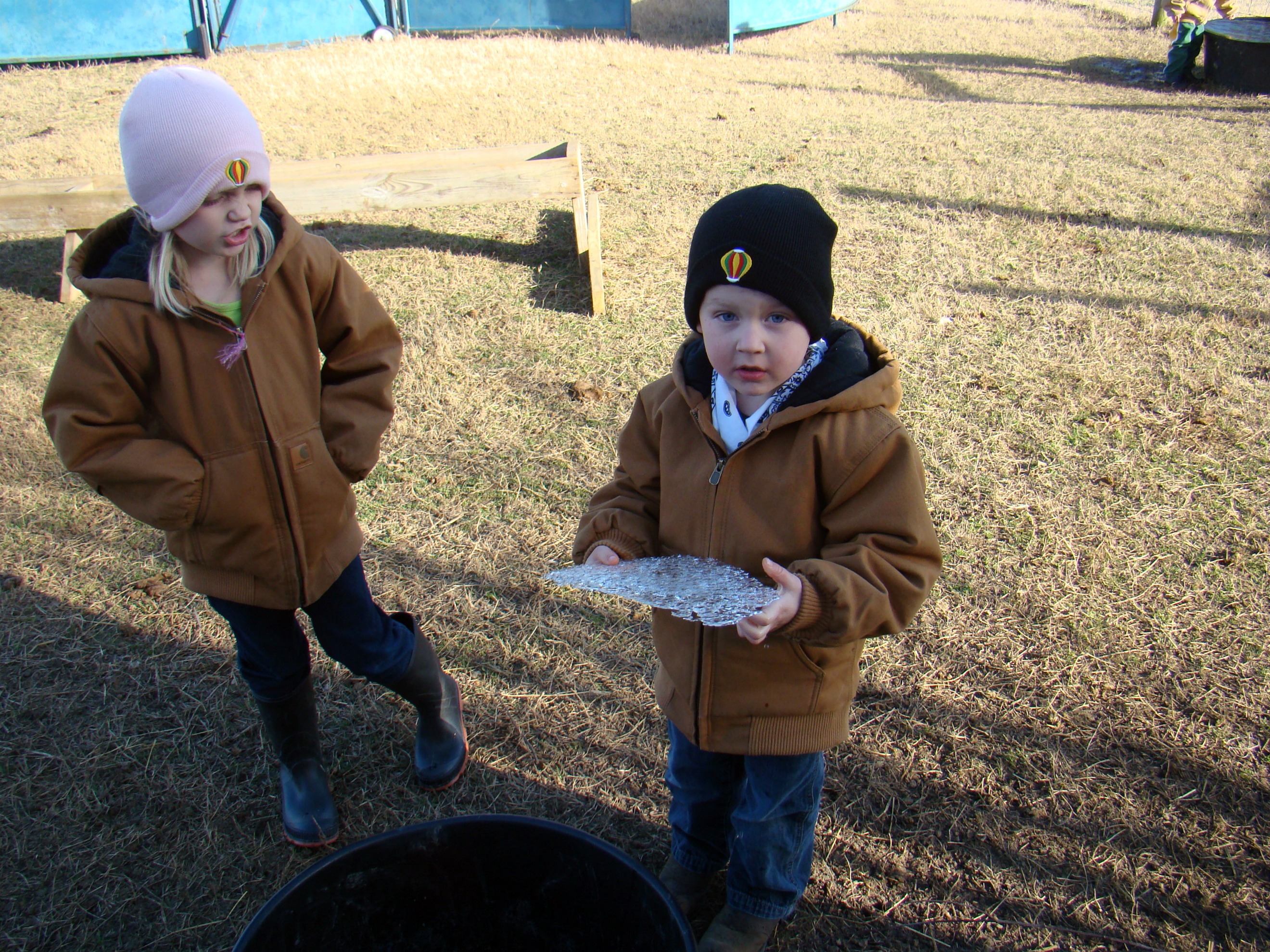 It was a bit chilly out there!

I love seeing all the lessons in reading and math and physics my kids pick up while we’re out there. (Science and biology are just sort of a given.) 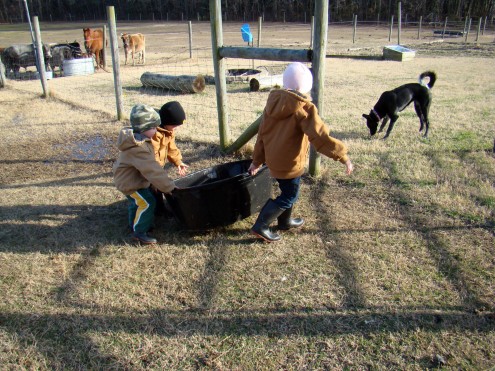 We moved the sheep, so we had to move the water trough for them. 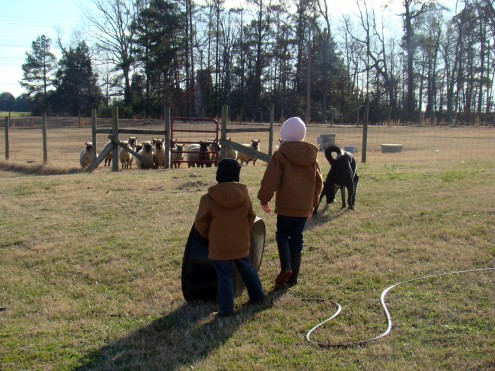 I was impressed with the Cowboy’s grasp of the math–but that might be because he feeds with me every day and sees how many bags we use each day. 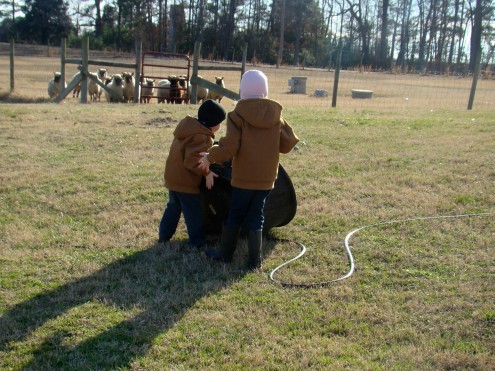 I’m not sure how much of the calculating Speedracer really grasps, but he’s learned enough to count noses and count scoops with us. I think the biggest thing is to show them that what they’re learning is important and applicable to everyday life. 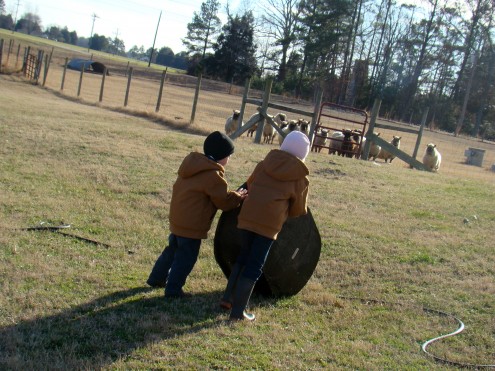 Even with two people pushing.

There’s also a great element of hands-on problem-solving. The Ladybug and the Cowboy tried rolling that water trough in a pointless circle a good three or four times before they gave up and tried another way. That kind of experience of getting the job done with diligence, but being open-minded to new methods in the process is just priceless. 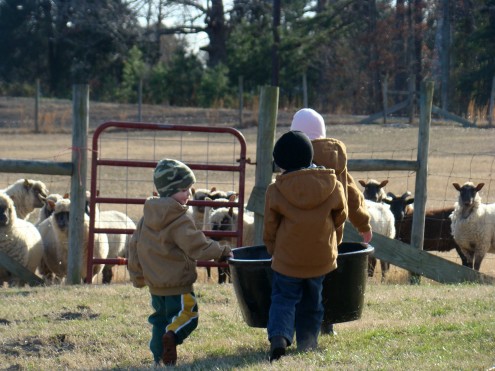 They had to modify their strategy.

They did end up completely stumped trying to figure out how to man-handle it over the fence. (Last time they did this, the bucket was only half the size of this one.) They didn’t quite have enough muscle to heave it over the cross bar and modify the angle in mid-push to clear that last couple inches of fence wire. It just got stuck. So I swung it over for them so they could keep going. 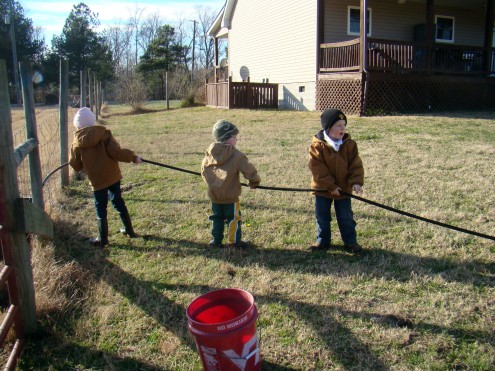 The Ladybug also had to read the feed bags to know which was for the sheep/cows and which was for our horse. She struggles with reading and I’ve noticed that having “real” reading to do seems to encourage and motivate her a lot more. She’s very excited about some cooking projects we have coming up and I think reading the cookbook is going to be a big help for her. 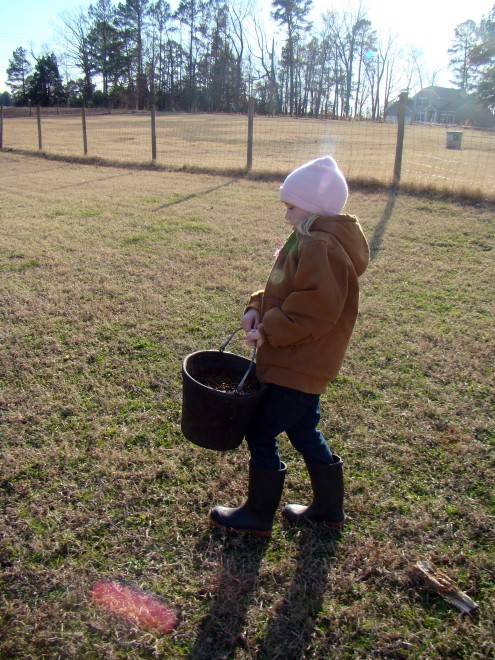 I can’t get over how competent and grown up my girl is sometimes.

The Cowboy’s always been my big helper, but I’ve seen some marked improvement with Speedracer lately too. I don’t know if it’s just that he’s finally maturing a little bit, or if we’re finally drilling it into him that he has to help out. But he helped unload groceries the other day (and I mean more than just dragging one loaf of bread along while howling that it’s too heavy) , and has been feeding the dog and cat without fussing lately.

It’s been a great encouragement to me. When they’re fussing and fighting about their chores I start to worry that we’re expecting to much from them. When they work well and don’t fuss, I feel like we’re on the right track.

Do you worry sometimes that you’re asking too much of your kids with their chores and expectations? This is constantly on my mind. I don’t want them to go sour on working diligently.