On Sunday we had a young couple come by to look at Hannah, our stubborn little Arabian mare. They decided they were interested in taking her for a few weeks to see how it worked out. We agreed that if it didn’t, they could bring her back. They have time and experience and I’m pretty confident it will work out. But if anyone does, we know the pain of a poor match. 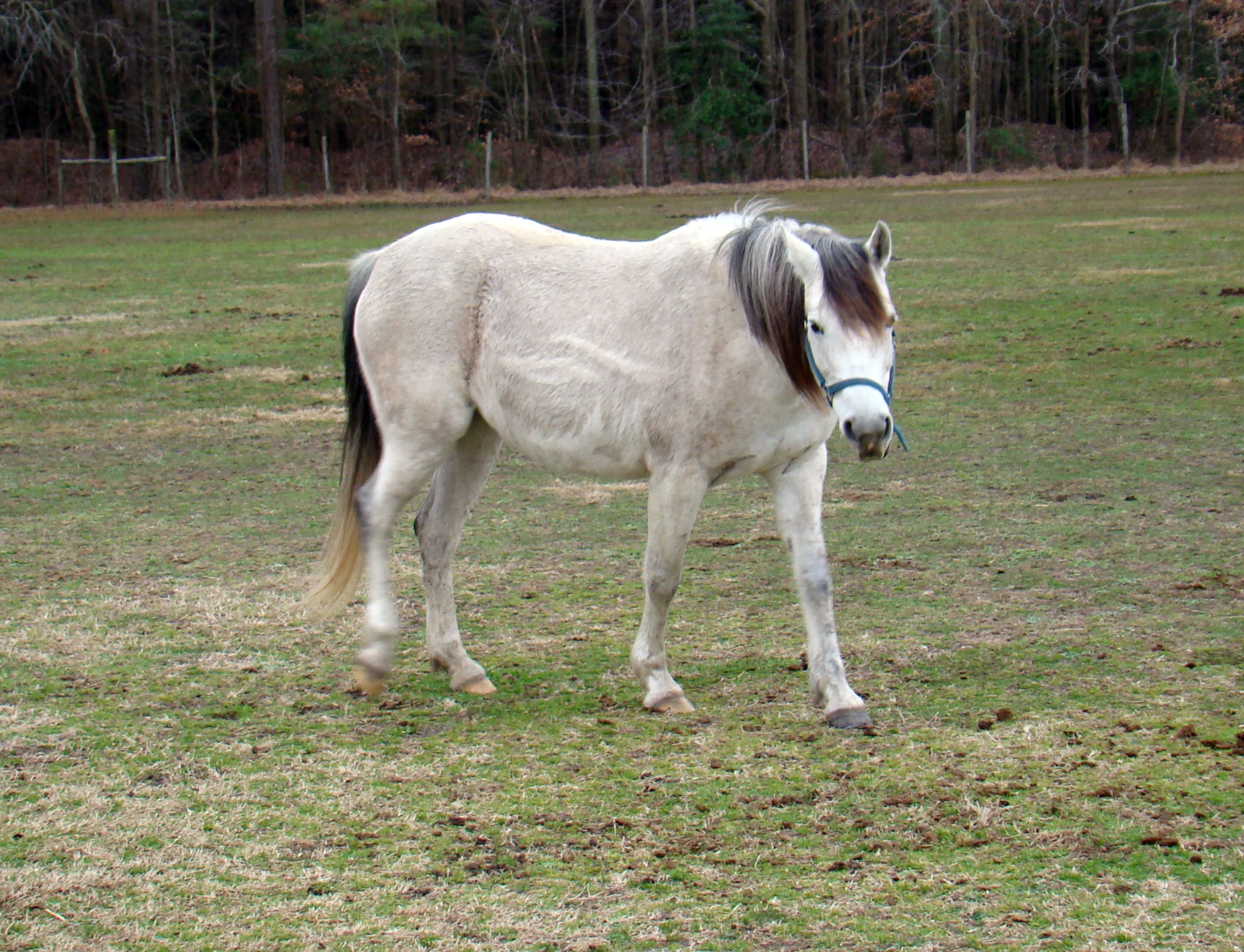 The mucky weather didn't show her in the best light on Sunday.

And then we had to go through the headache of loading her on the trailer. Now, Hokie loads like he does everything else–half asleep. Hannah, not so much. She’s not aggressive. She’s not rearing and screaming or kicking and thrashing. She’s just stubborn. She plants all four feet at the edge of the trailer and will. not. move. forward. 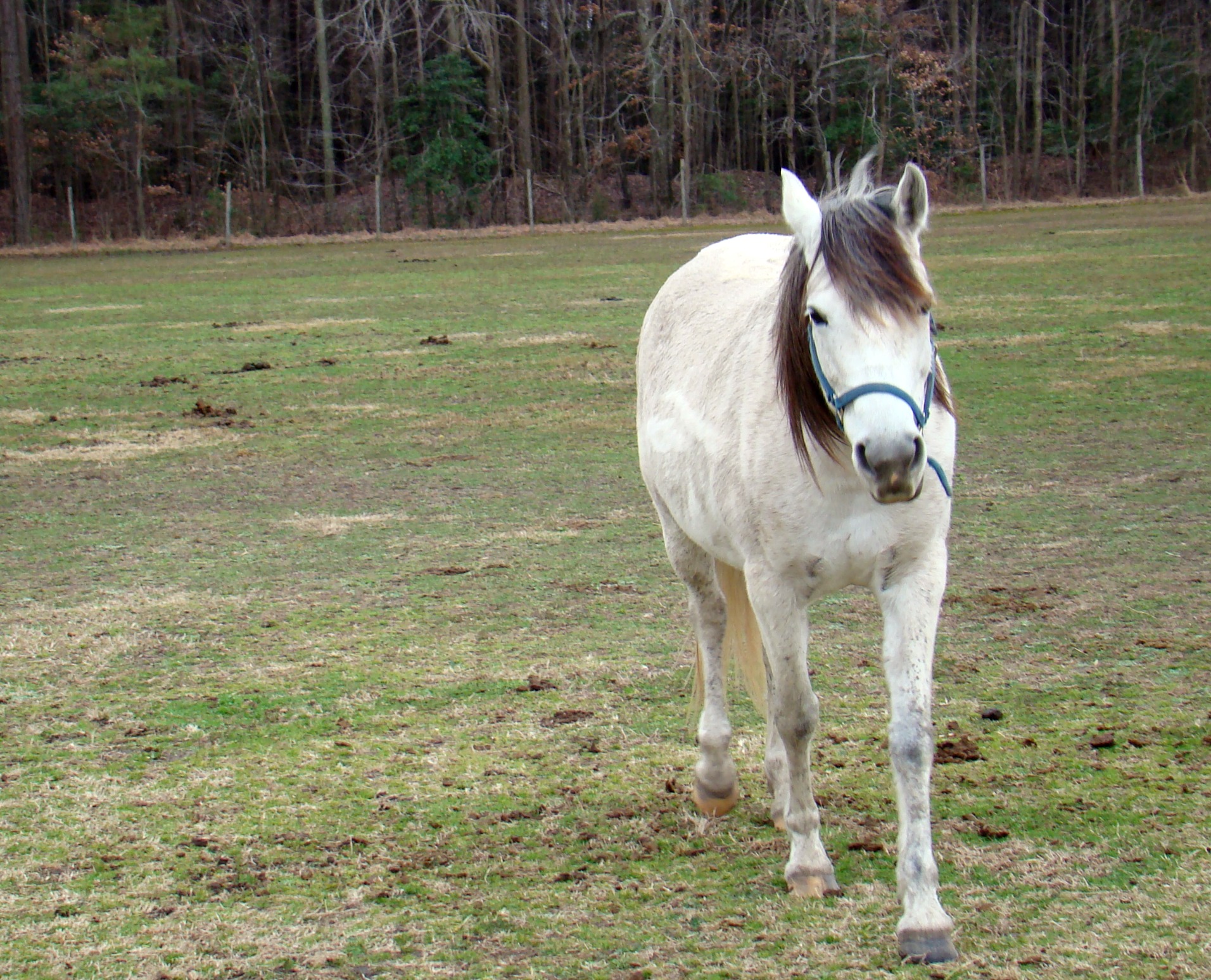 I tried to brush her up, but she just went out there and shook it off and rolled.

She’ll strrrrretch her neck as far as it will go to try and get your carrot…she’ll even go further and stttrrrretch her lip out so far you can count her teeth…but she will not step up in there. Pulling on her just makes her throw her weight back against the line. Shoving her from behind just makes her throw her weight back. It’s like the proverbial donkey cartoon. She almost sat on Mr. Fix-It pushing back against him pushing her. 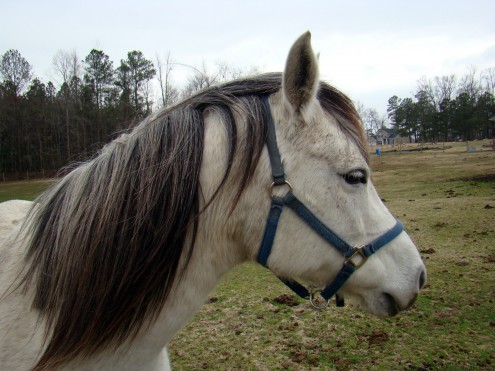 I did manage to pick and snip the snarls out of her mane. She has one spot down low that ALWAYS tangles ferociously. I started keeping scissors in our grooming box.

It was a careful balance of not getting frustrated but being firm. Trying each technique just enough to judge her response, but never having her go over from stubborn to afraid. Never creating an environment of “battle” between us and her. Trying something and then stepping back to let her think about it. Rewarding her the second she took a step forward, but never allowing her to take a step back. 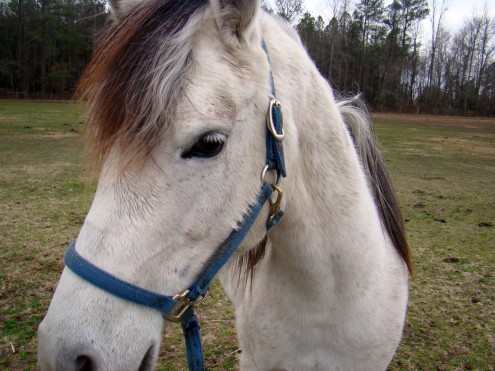 She's always loved being groomed. Just not as much as she loves rolling.

Just like kids, you can’t let them get away with it, and we got her loaded. Eventually. (Actually, it only took an hour and that’s good time!) We tried treats with no luck. We tried massaging and lifting her feet onto the trailer one at a time, but she would only put her toe down and then move it back as soon as I went to the other foot. We tried a little bit of pushing and shoving, but no luck. We tried a bit of flicking her with a longeing whip to maybe startle her into that first step, but no luck. She didn’t even blink–and actually spanking her into the trailer was not the plan.

Finally, we penned her right at the back of the trailer and left her to stand there loose and think it over. Then we sprinkled her from behind with a water hose. She tossed her head a few times and snorted and then just jumped right in by herself and moseyed over to the grain bucket we’d been tempting her with. We closed the back gate and walked through the side door to tie her up and she started munching some grain and they drove off. End of story.

I can’t believe it took us an hour to come up with that. 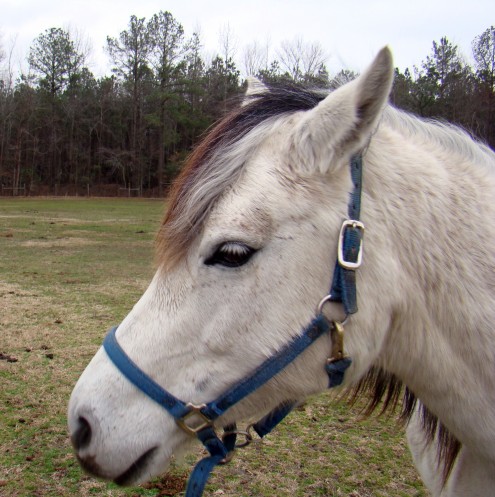 And I have fussed over that split mane for 2 yrs with NO luck!

I wrote yesterday about missing her already, and everything she represented here. (And I’m sure you’ll hear all about it if she ends up coming back!) But I’ve learned some very important lessons from handling animals (2 and 4-footed! {grin})  here at the farm.Stubbornness can come out in two ways. It can come out as frustration, bullying, erratic commitment to having your own way, and anger…

Or it can come out as firmness, consistency, perseverance and long-suffering, commitment to principle and purpose, mercy.

If you’re interested in learning about relating it to animals, check out Cesar Milan, Buck Brannaman (the Cowboy loves his documentary), or Temple Grandin.

If you’re interested in learning about relating it to people, read the Bible. No one was better at it than Jesus.