Well, we’ve gotten the major dusting, scrubbing, purging and shuffling done in our playroom revamp (You can read about our chaos-to-carpet-again phase here). 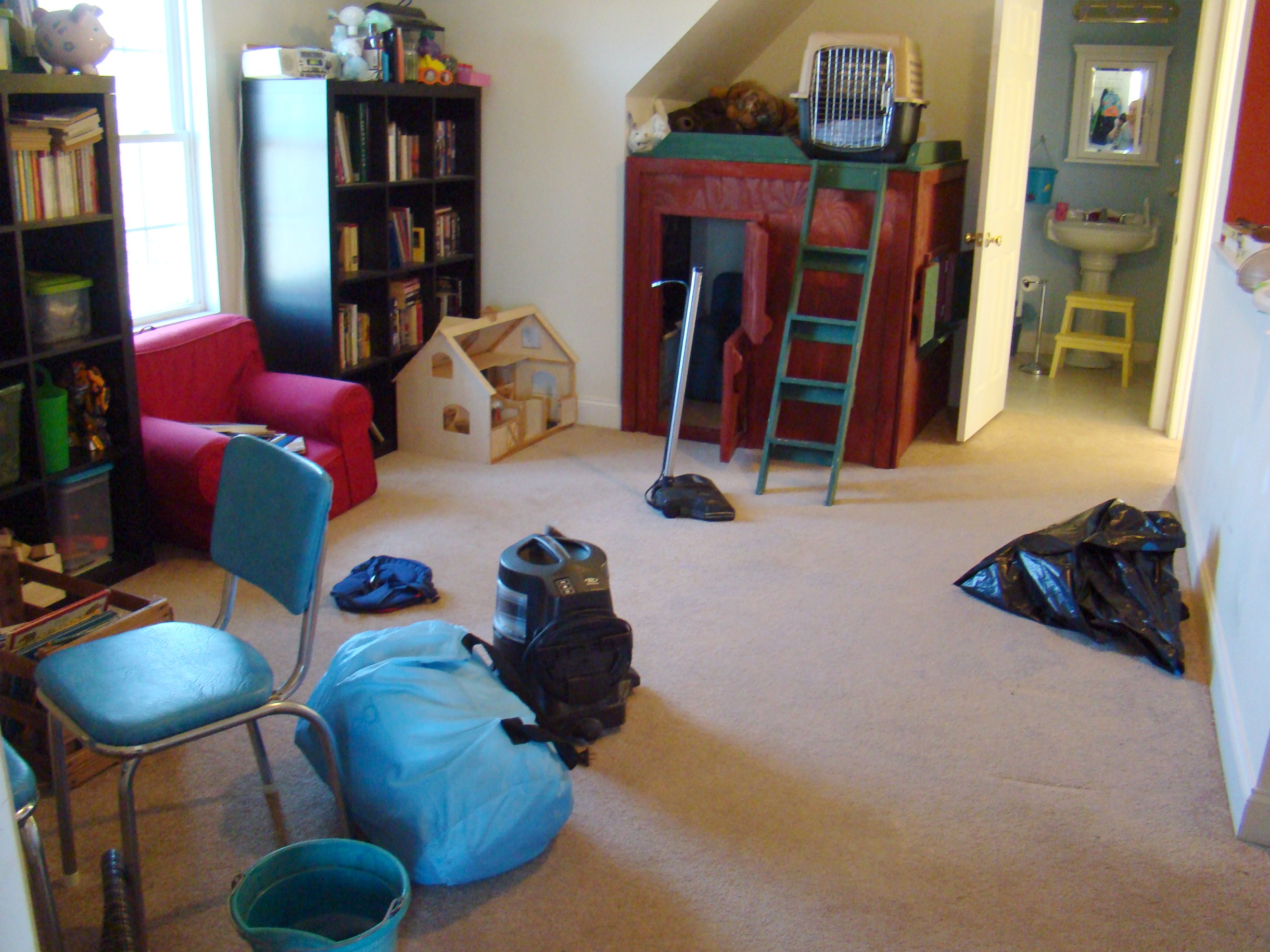 This is where we sort of left off last time. Well, the air mattress and the dog crate weren't there last time, but at least you can see the carpet again.

The heavy-lifting for this project gets done on the weekends and it’s not an instant effort. It’s moving along in stages based on when we have time and what the weather is doing. And there was a break when the Ladybug was so sick. We’ve also being working on both of the kids rooms at the same time so our efforts have been spread a bit thin. 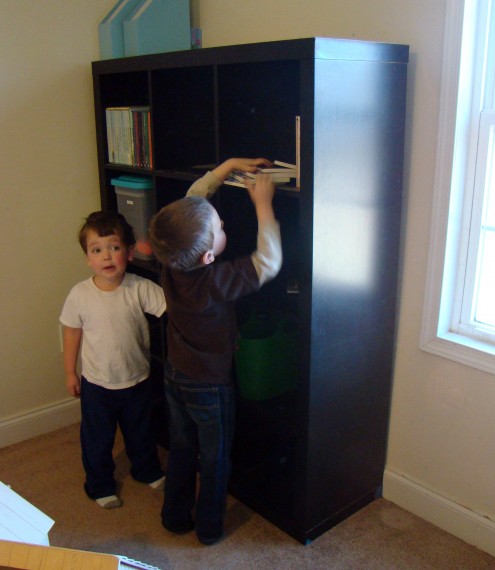 Everyone helped. Even Speedracer pitched in with a good attitude.

But after sorting and purging, we took everything down, and moved everything out, and scrubbed everything. The walls, the baseboards, the windows. I’m telling you, that room is clean.

And I have to admit, I wasn’t horrified by anything up there. There was some dust and some bits of this or that, but nothing that made me cringe when I came across it. I mean, it’s been a looong time since we moved those bookcases and vacuumed behind them. But we don’t allow any food or drinks up there and the animals don’t go up there, so I think that cuts down on the mess. 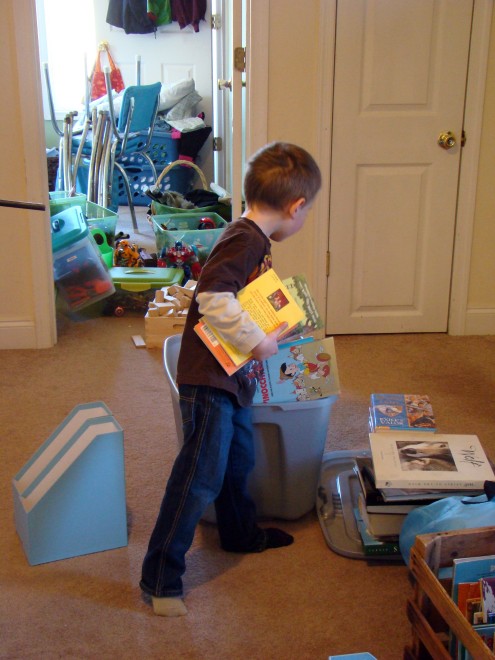 We even sorted out another two grocery bags of books that we were ready to get rid off while we were emptying the shelves. (We still kept a LOT though!)

The kids were very motivated by getting to set up the “new” table and chairs.

Then Mr. Fix-It popped up briefly to completely re-work my layout and disappeared back out to the garage. 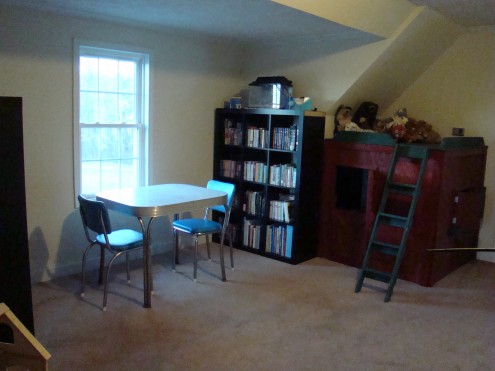 Originally I had planned to leave the bookcases flanking the window, like the first picture. This is much more roomy!

And now that the room’s staying neat (for the most part, I mean, it is a playroom after all) we’ve agreed to try fish again. (And have also discussed letting the boys set up a terrarium for frogs–but don’t tell them that!) Cleaning and setting up the tank is actually on our list for this weekend. We have dogs, cats, sheep, cows, chickens, and even a horse, but the Ladybug is almost ready to burst with excitement over getting a couple goldfish. Go figure.

But I’m most amazed by how much easier it is for them to clean up now that we’ve cut the clutter and labeled their toy bins for them! 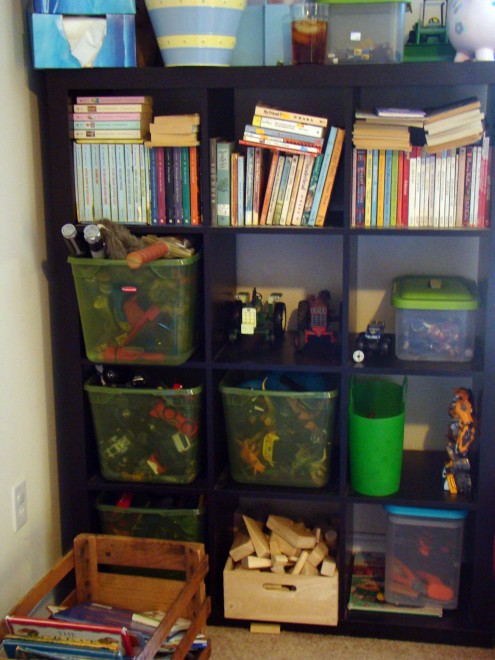 This was our shelves before the final sort and move. Notice the chaos of books and bins? (And the mandatory glass of sweet tea?) 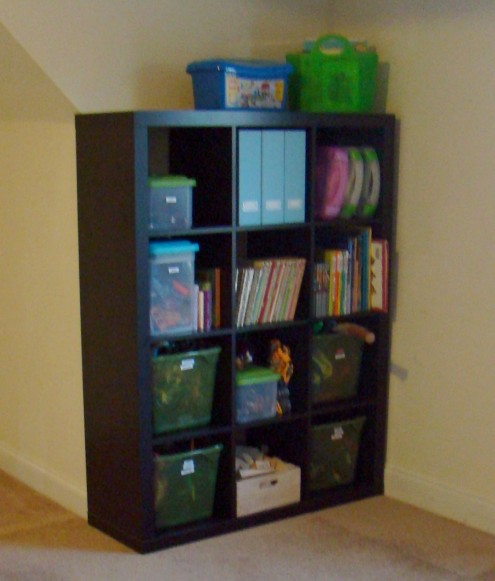 These are the shelves after. We labeled the bins and moved most of the books to the other side 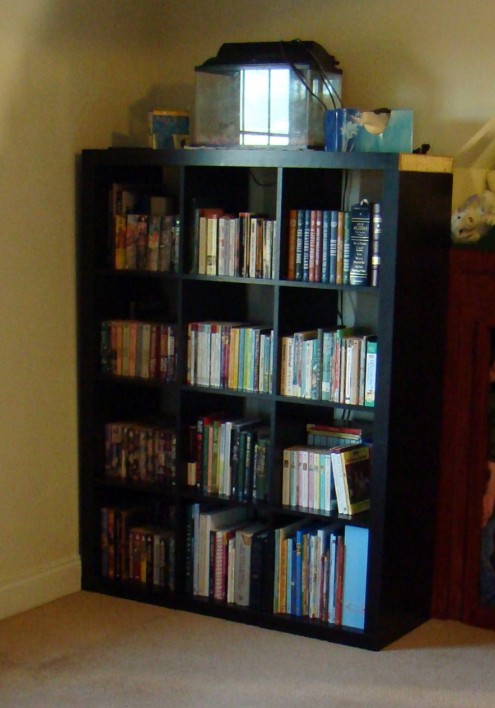 Chapter books are in double rows to make them fit neatly. Kid books are single rows at the bottom.

We are going to get one more green bin for the cubie above the blocks (second row from bottom, middle) to replace the little one there. It will fit all the stuff that’s currently loose on that shelf. And we moved some of their “favorite-est” toys to their bedrooms too, but many. Their bedrooms are just too small.

Now we’re moving into details. Paint, curtains, and the reading circle the Ladybug specifically requested–with a chalkboard so she can teach the boys how to read, no less. I’ll be posting about their chalkboard (and our first adventures with chalkboard paint!) tomorrow.

We’ve also got a new plan for simplifying our laundry chaos that I’ll be sharing about shortly when I start talking about some more decorating projects in the boys’ room. (Once I’m sure it’s going to work and my whole house won’t go up in flames over it!)

Do you limit the total amount of clothes or toys your kids are allowed to have, or does it just seem to grow and grow sometimes?