We’ve been on a real streak of testing and trials lately. Our vehicles, our appliances, our furnace, our smoke detectors (I’m still traumatized by that one!)–even attacking wildlife! {smile} And one by one we’ve just put it back together and kept keeping-on. Mr. Fix-It has a temperament that really shines during crisis. He thrives on hands-on problem solving. He’s like the eye of a hurricane when these “big” things start happen and I start to lose my mind. I’m running around like a hamster in a wheel trying to make “an action plan” and then a Plan B and a Plan C…and if the truck breaks down on Saturday and we can’t get it fixed how are we going to get to work on Monday?!

Meanwhile, he’s just methodically going through problem-solving scenarios one at at time. His process is that we’ll choose a Step Two after we see what happens with Step One. He has the very useful ability to cut off everything else and just deal with the problem right in front of him. As I’ve learned to work with his process, I find that our marriage works better and better. {smile} My job is to manage everything else (kids, house, dogs, farm…) to give him the freedom to focus on and deal with the crisis of the moment–because, really, when you have no heat in January, the one that can actually pull the motor of the furnace out and replace it gets to call the shots! {smile} (PS…I didn’t even know our furnace had a motor. I don’t know what I thought it had, but I always just thought a furnace had “a furnace” for parts. LOL What would I do without my Mr. Fix-It?!) And as I said earlier–it’s been a trial, but it’s working!

Marriage musings aside, I guess I shouldn’t have been surprised when we got a call that a friend needed some help out of a mud hole. That’s just how our month has been. 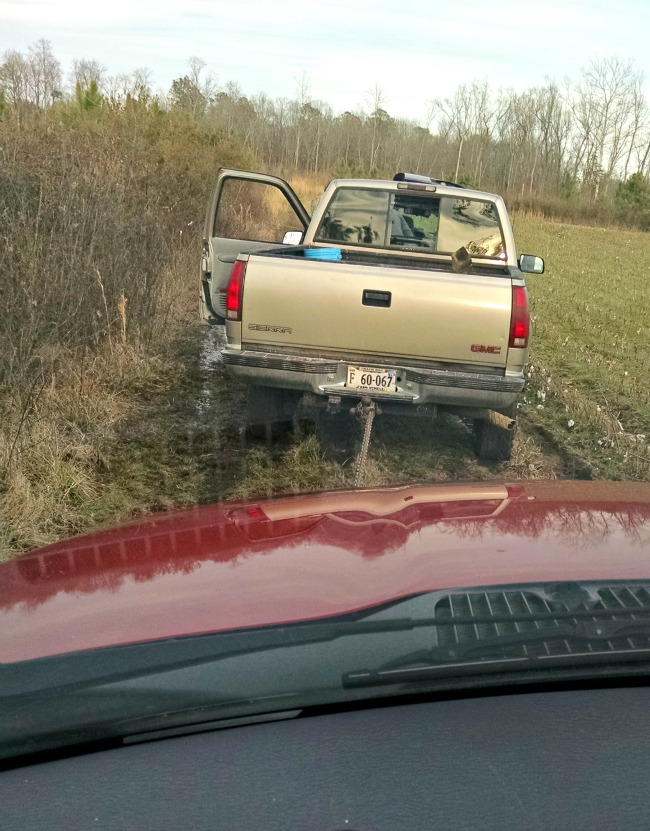 We were on our way to drop the kiddos off with the grandparents for a quick overnight stay while they have a school break, so the whole crew was piled into the Dodge and just barely buckled up when the call came in. The problem wasn’t the mud, so much as the fact that the Dodge is having issues and we don’t have 4-wheel-drive at the moment. (Mr. Fix-It believes the transfer case is shot.) So our Hemi is only 1/2 the man he usually is. {smile}

So Mr. Fix-It went back and got the GMC. The munchkins and I followed him…just in case. (Well, and because boys are boys…and mud is mud…and trucks are trucks…and trucks IN mud, well, you get my point…) 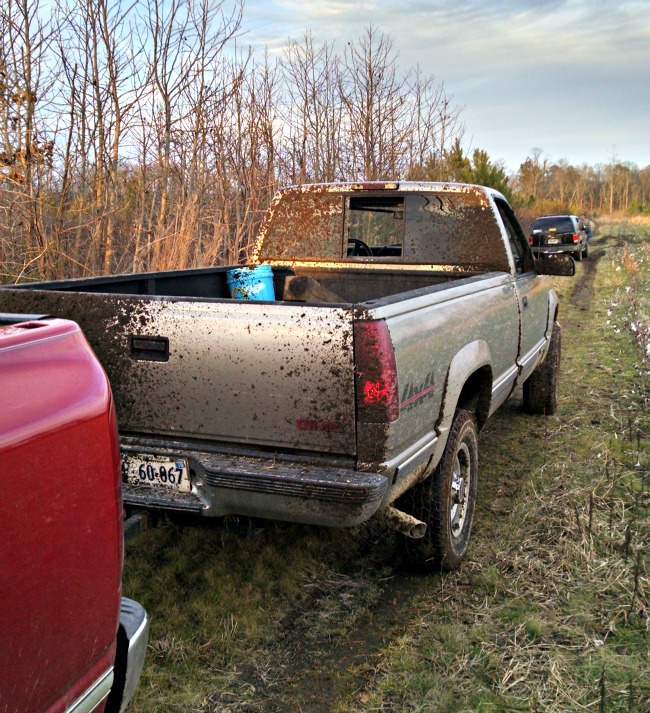 But the GMC’s really not outfitted for this sort of thing and that SUV was in it. So we ended up needing two trucks to do one truck’s job.

Just for the record, I hate doing this sort of stuff. I don’t mind riding with Mr. Fix-It, or watching (remember the tractor incident last summer?), but I hate when I have to do it. It’s all a great, big, redneck, country roads adventure…until you have to be behind the wheel. I’m scared to death I’m going to break something. Especially when it comes to snatching. I’ll hook up and pull, but I tend to lose my nerve when Mr. Fix-It starts hollering “jerk it” and “goose it.” He knows what he’s doing–I’m just following directions and praying that nothing snaps loose. 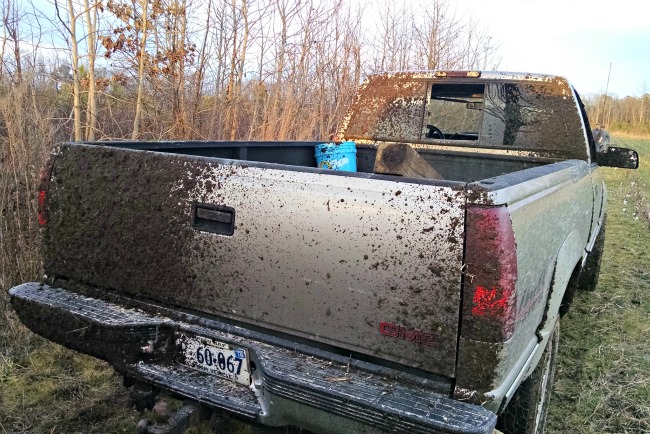 We got it out, but then the GMC was stuck. Not stuck like down in a hole stuck, but stuck like spinning on glass and couldn’t go anywhere stuck. And nose-to-tail like the top picture, the Dodge couldn’t get any traction either, to pull it out. (No 4-wheel drive, remember?) Grrrrr! Meanwhile, every attempt is tearing up the path worse.

So the crew and I pile out to watch and the guys hook the trucks tail-to-tail and the Hemi hauled it out. You can see from the pictures how much spinning was involved.

You can also see that the back sliding glass on the GMC was open because they were talking back and forth as they worked it out. 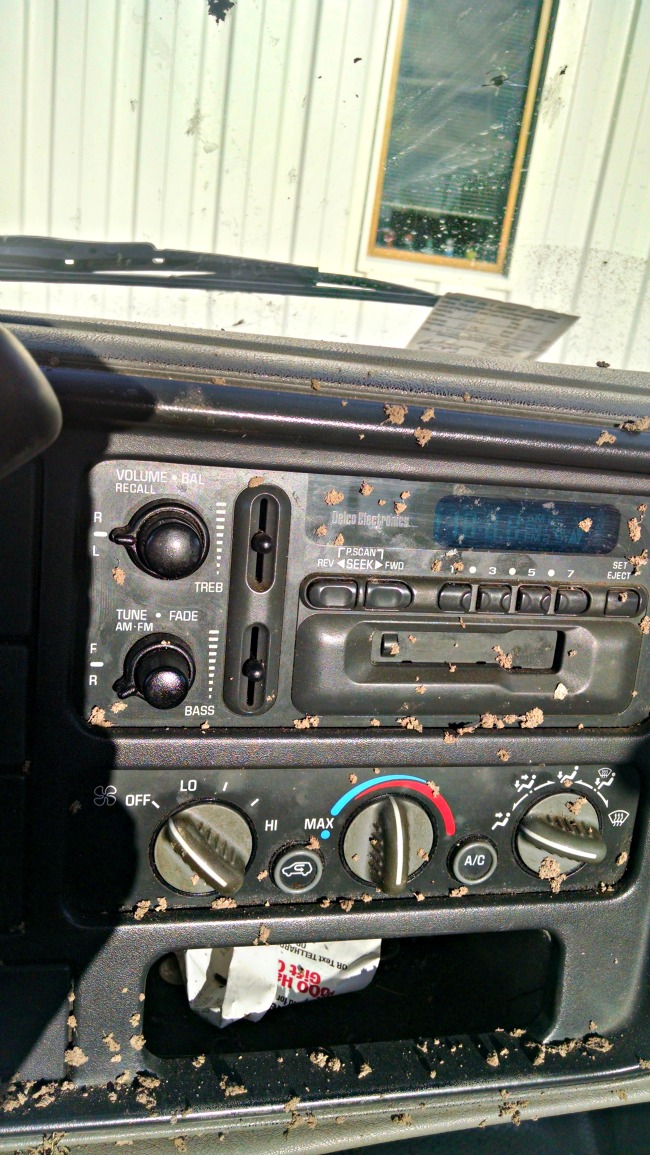 I guess it could have been worse.

The conclusion of this story is that the Hemi is back in the garage and we’ll be pulling the transfer case out in the next few days. I use “we” because I’ll be out there holding the work light, passing the wrenches, and running to the parts store, as requested, since the kiddos are out of town. Normally that would be the boys’ job. (Well, except driving to the parts store, I still have to do that for a few years!) And I have a feeling (after watching 20 YouTube videos last night!) they’ll get their time out there too. This won’t be a quick fix. 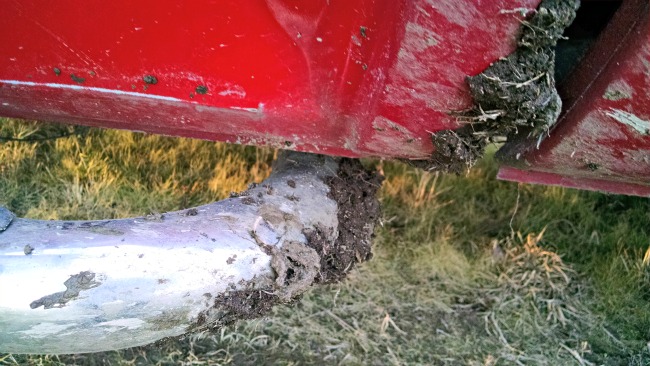 Meanwhile our biggest snow last year was in February. {sigh} One step at a time!

This is why our tagline is “…With Boots On!” LOL How are things around your home place? We’ve also been doing our normal winter purge, organize, and house re-fresh, so if crazy messes stop happening I might have time to write about my new “capsule wardrobe”,  the funky industrial pipe-towel bar we made for our bathroom, and how we survive packing lunches every. single. day through the school year.

Lamb Watch 2016 is also here, although our flock is smaller this year, so be sure to follow us on Facebook to keep an eye on things during the busy season!