No, not the book by Elizabeth George Speare (although we like that too!). I’m talking about the real thing. Brown. Wet. Big flat tail. Makes ponds where there should be no pond. Beavers. 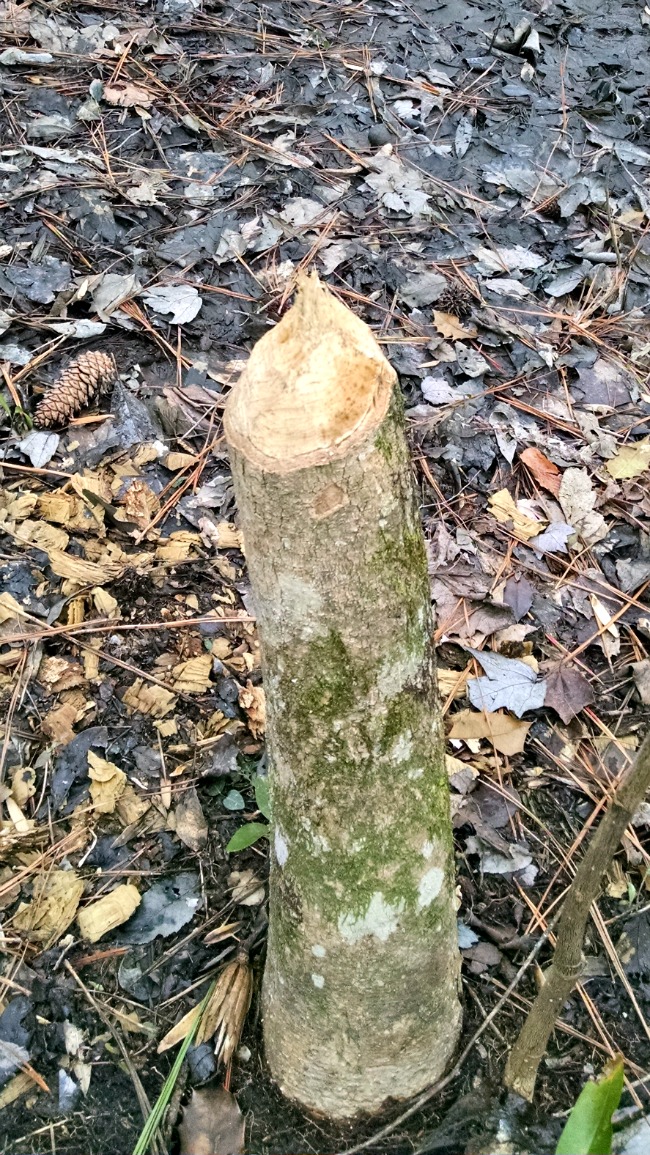 This is pretty fresh work. 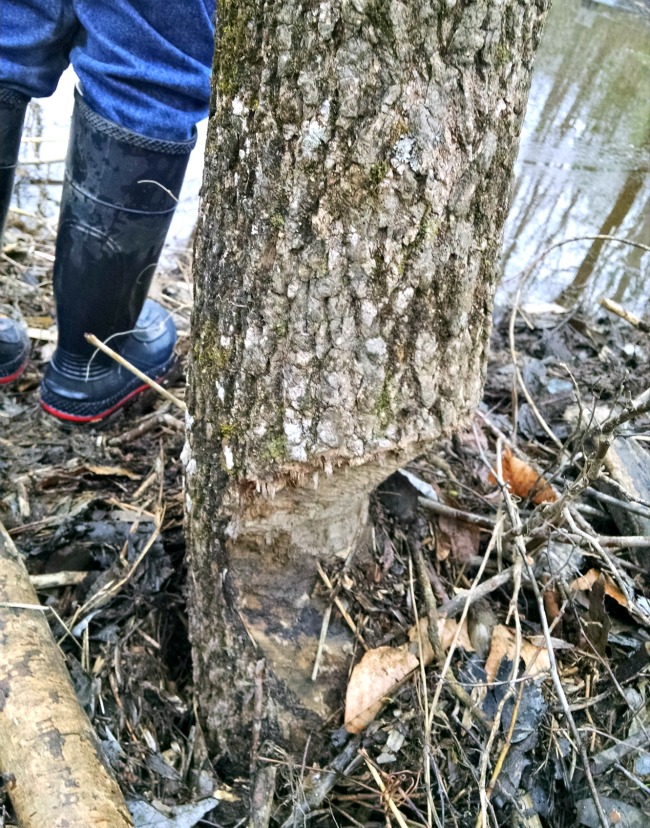 Not as fresh, but definitely a beaver.

We’ve got beaver problems at the tree farm.

We’re not immediately ones to campaign against the local wildlife. We try to have a live-and-let-live philosophy. We only target wildlife that is specifically damaging our resources. For example, we know there’s coyotes around here–but none have ever bothered our stock, so we don’t mind sharing space with them right now. We’ve also lost chickens, ducks, and eggs to foxes, possums and raccoons. So  we set our traps near our barns and coops and try to manage or take out the ones that are actually causing us trouble–we’re not hunting den sites in the woods. We’re just protecting our territory and resources.

So there’s no reason that beavers are automatically a problem. However, in this case, the flooding they are creating for their pond is killing our trees. And for a tree farm, live trees is sort of a priority. 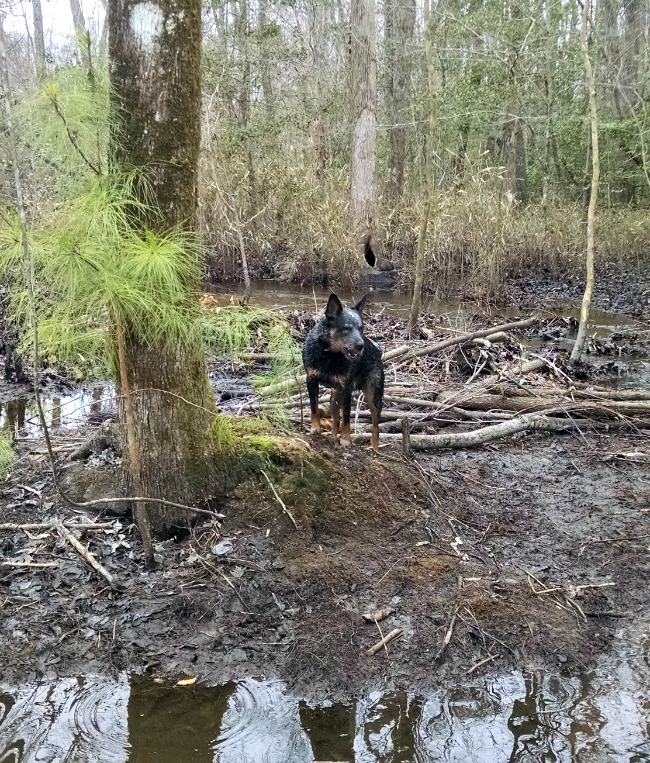 You can see the mucky area of flooding is wide, even though it’s not all under water at the moment.

We’ve tried removing their dam and den, to encourage them to relocated–but they came back. And we’ve taken a couple “out”–permanently. But we were out there recently and it looks like someone else has moved in again. 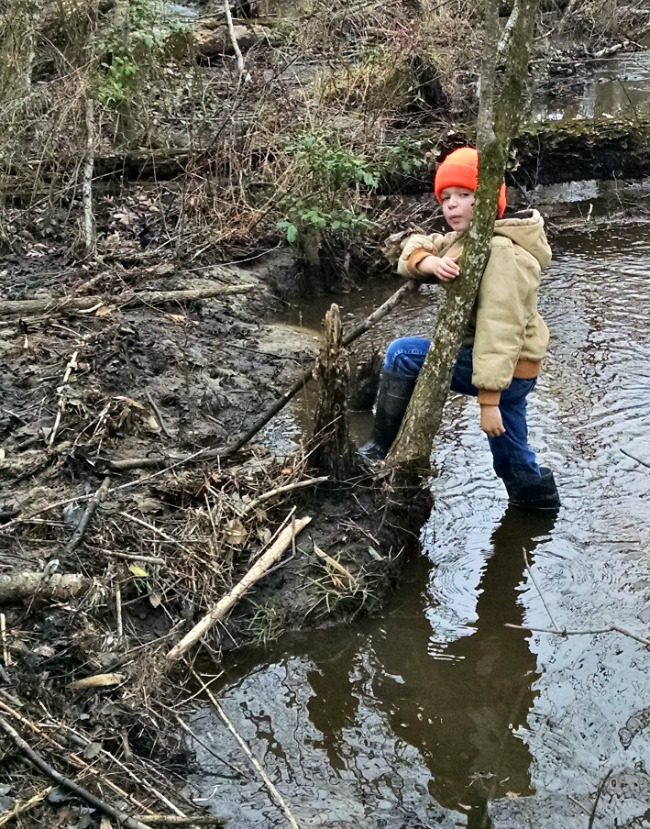 Besides gnawing down trees, they also use their tails to cut out banks to deepen the channels.

The flooding is down since the first time we removed the dams, but it’s coming back and there’s fresh gnawing out there. The dogs are certainly convinced that there’s something in the newest pile of sticks. 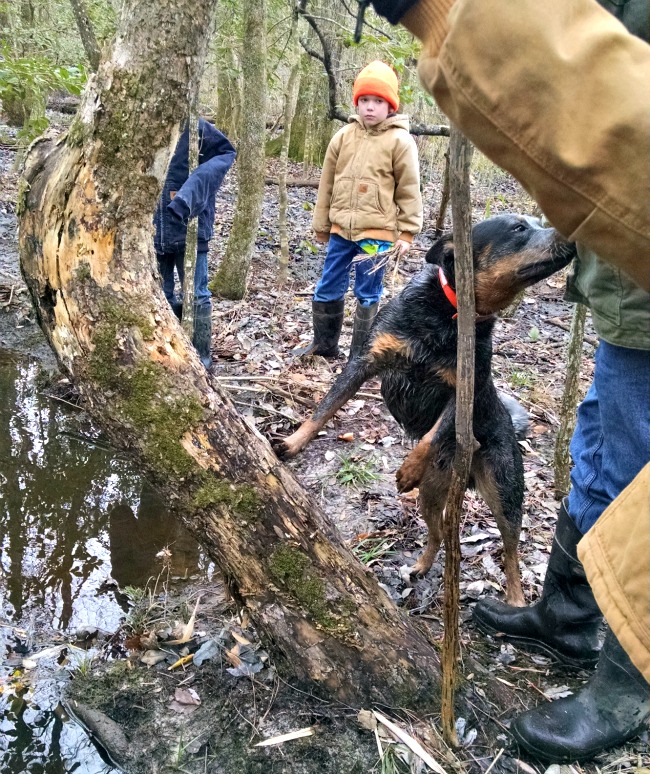 Coal was practically climbing trees trying to tell us something was out there!

The kiddos thought it was all a great adventure and that a pond would be fun. These things are tough as a landowner. A pond would be fun, and watching beavers would be pretty cool too. But not at the expense of our trees.

It’s also an important lesson for the crew that managing your land starts with simply monitoring it and knowing what is going on. What’s new out there? What’s old? What has changed? 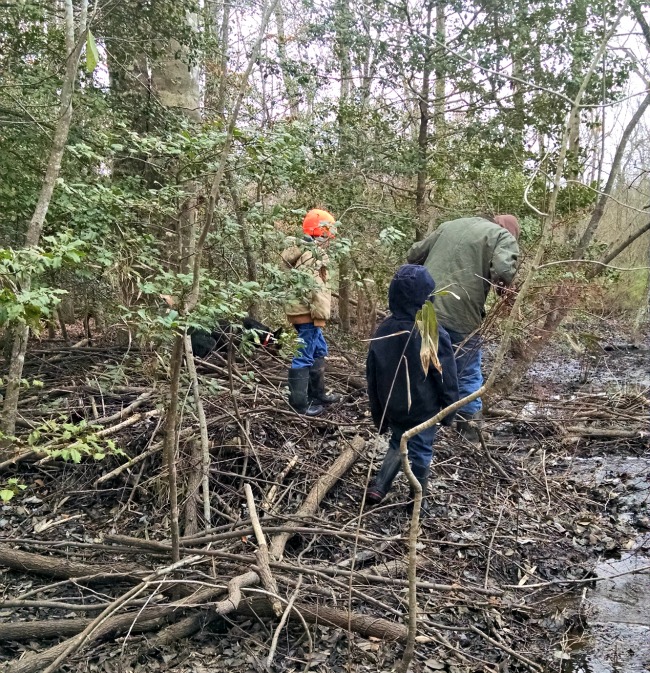 They’re standing on the re-start of a beaver house. We think it might be juveniles this time. They’re not working nearly as fast as the last time we had to remove a structure out there.

It’s another thing to keep an eye on. The creek channels are getting pretty deep out there too. Coal got stuck a few times and Speedracer almost got his boots stuck few time as well. The mud is thick at this time of year!

How are things at your place? We don’t get much snow, but we get a lot of wet in the winter. Everything’s actually starting to green up a little, although the temperatures are still below 40 most days. It’s been a pretty mild year for us so far.

If you’re interested in learning more about beavers, here’s some great resources…