Well, we registered the boys for football this Fall. Practice doesn’t start until August, but we’ve started accumulating their gear. And they are so excited that they’ve started wearing it around the house and to do their chores, especially walking the dogs. You know, just to get used to it. {smile}

Speedracer is particularly excited about it and has been filling all his extra summer minutes with football movies–which then inspire him to throw his gear on and run around the backyard like a gridiron superstar. When it comes to sports movies, we have a lot of them. He loves them. And they’re all pretty wholesome and inspirational, although usually kinda cliche. Here’s a list of our favorite football picks for Family Movie Night, and a few I found for FREE on Amazon Prime.

(BTW, football equipment is expensive, ask around on the team for used gear and make sure to use Swagbucks when shopping online to get that 1-5% back. I’ll be turning my Swagbucks into gift cards for Back to School shopping shortly!) 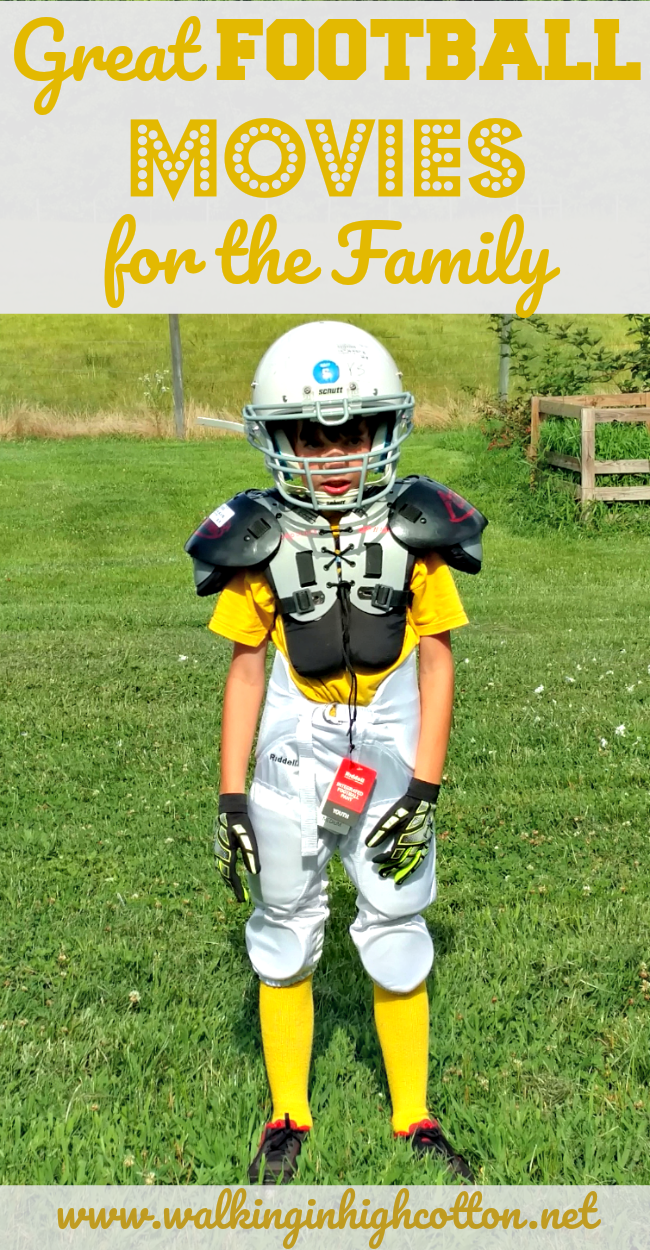 Just a quick disclaimer…these are movies we let the kids watch with us as a family. Every football movie, even some good ones, might not be on here. I’m not ready for them to start absorbing movies that over-glorify certain high-school behaviors like Friday Night Lights or Varsity Blues. And certainly not the celebrity egomania of adult behaviors in Ballers, although I admit to being a bit hooked myself.

Also…watch for Amazon price drops. All of these I got for the family for less than $10–most more around the $5 range!

I love this movie. It’s about the comeback from Marshall University after their program tragically lost nearly the entire team, coaching staff, and boosters in a plane crash in 1970  They did a great job with the story and managed to hit the perfect balance between a story about football and a story about people. There are also several great documentaries about the actual story, including Ashes to Glory, Remembering Marshall (produced by ESPN), and the almost autobiographical book A Coach in Progress by Red Dawson.

Excellent movie and an excellent soundtrack! Another Disney effort and was definitely just as good as Miracle about the US Hockey team, although it’s about NFL level players. We also really enjoyed having the extra little documentary at the end about the true story.

Not a favorite with me, but the kiddos are loving it right now. A high school football drama touching on race and spiritual issues.

Seriously, who doesn’t love this movie? 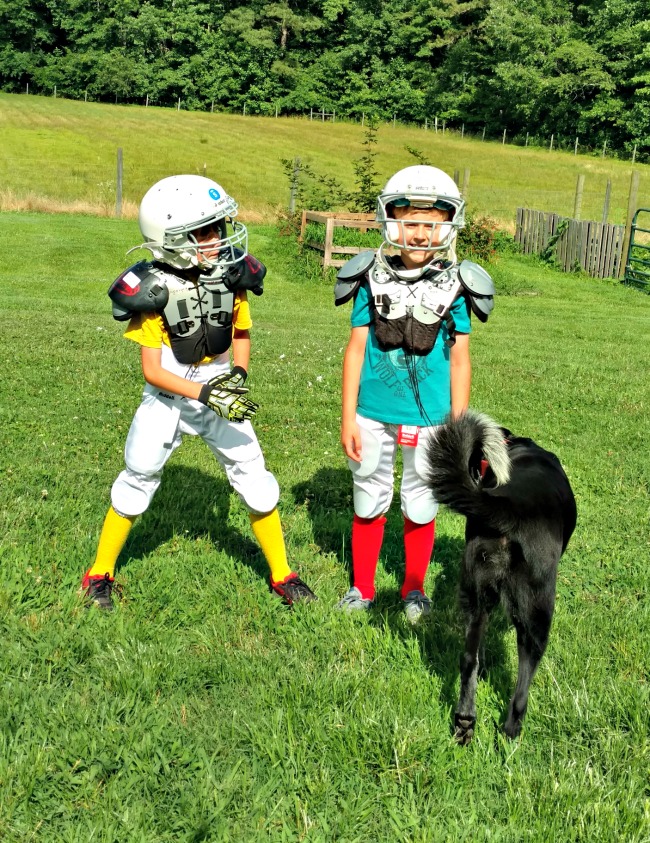 When the Game Stands Tall

Just watched this one for the first time, and I have to admit, the climactic game was pretty intense. It had Speedracer jumping off the couch hollering at the TV. {smile} I will say that overall it feels pretty intense to accept that it’s a high school team with 16-18-year-old players. I was also excited to see that they’ve developed a When the Game Stands Tall Devotional based on the movie and I think that would really reach out to my Speedracer, who even preached on Being a Pro-Bowl Christian last year in Bible Club. {smile}

Ok, not the “best” football movie (acting-wise, maybe 3.5 out of 5 stars) out there, but my boys are small for their age so one really hit home. My Cowboy really took a punch in the gut about giving 110%, even when you’re not being asked to, and understanding what it means to be self-motivated.

This one was a Virginia high school team from 1971, a high school that I actually played in softball back in my own high school days (geez, let’s not go there!) and it’s a great story and a great film. Our kiddos were able to make a lot of connections with our family being from that area and all the civil rights history they study in school each year, and it had a big impact on them.

We have watched this movie so many times I think they’ve worn our DVD out. My crew loves Big Mike.

Based on the true story of Ernie Davis being the first African-American to win the Heisman Trophy, with Dennis Quaid as his coach, this movie deserves more attention. It was well done, and again, we enjoyed the extra documentary footage that came with it.

Redemption story with kids in juvie and the Rock. Good stuff, but some more mature themes. I think they’re handled well, but be aware if your kiddos are more sheltered like ours are. 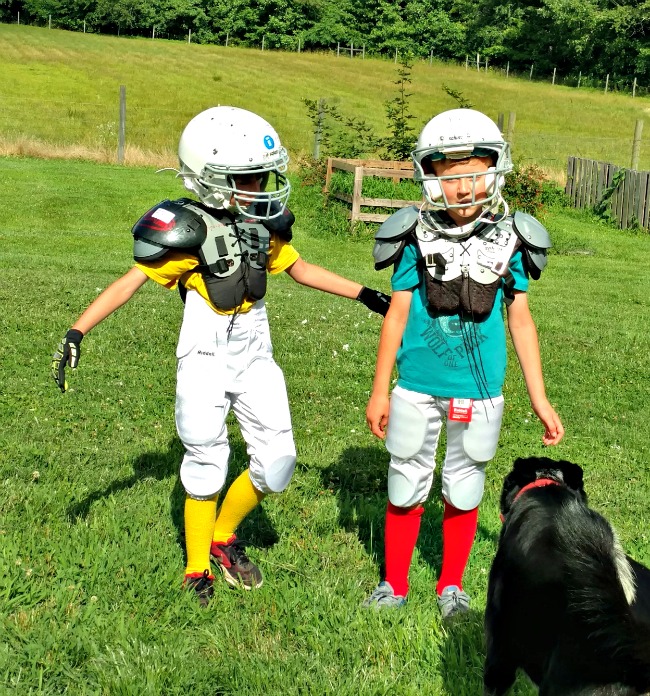 A solid family movie night pick with family values, hard choices, and integrity. I’m surprised it didn’t get more attention, although Kurt Russell is not as strong in this one as, say, Miracle.

This one was a little slower for the kids with no actual game-action, but Mr. Fix-It and I have watched it more than once. I would have put it higher, but the crew doesn’t enjoy it as much.

I have to admit, not a favorite. But this was an earlier Kendrick film and I think it was just trying a little too hard. Good message, not as good in the acting.

Good movie about those high-school behaviors I mentioned earlier, but a little preachy. Football usually lends itself naturally to those messages without having to hammer it in quite so much.

Solid family movie, but not one we pull out all the time. I love Andie McDowell, though.

This one is still in my closet for us to watch, but the reviews were very good.

This one is funny, but might needs some parental editing. Also of adult interest was a spin-off TV show that lasted a few seasons. 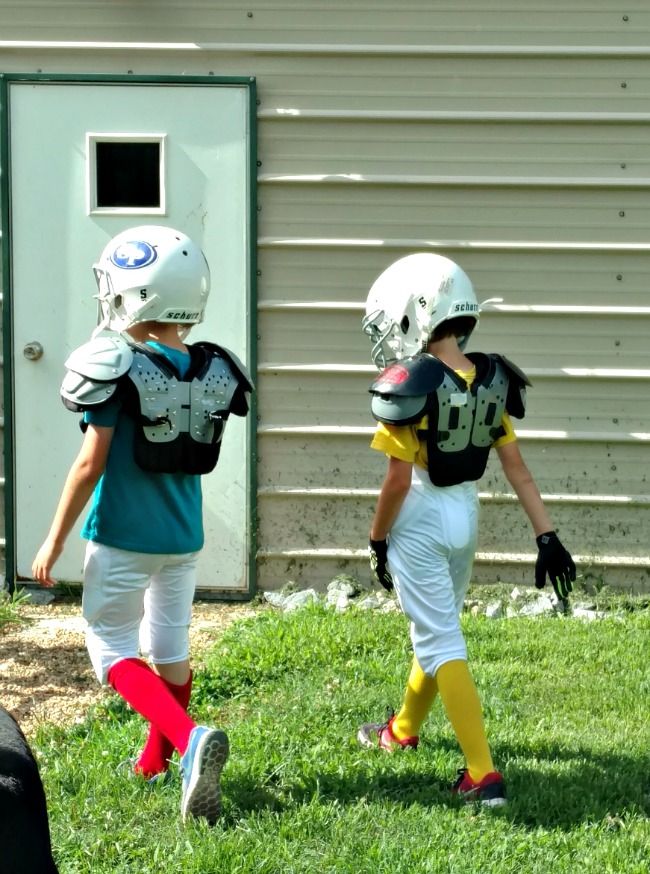 These are some FREE choices (at the time of writing) on Prime Video that I wasn’t familiar with, but seem like a good fit to load on the kids’ Watchlist. Just be aware that there are a lot of football films that come up on a Prime search that I would NOT want the kiddos watching either. They watch what I load onto their approved list. They don’t search for stuff themselves.

The Power of a Dream

A documentary about reaching underprivileged youth in Chile with American football (instead of soccer)…looks very interesting!

Decent storyline, not the best acting, but I like D.B. Sweeney (remember Lonesome Dove and The Cutting Edge?)

Do you have any favorite football movies? Or sports movies in general even? They usually meet all our criteria and expectations for a good family film and we’ve enjoyed everything from McFarland USA with Kevin Costner to Glory Road with Josh Lucas. But we’re looking to branch out so I’d be particularly interested to hear any recommendations on sports movies with soccer, rugby, or things other than football, basketball, and baseball. Or anything with women’s sports!