About 2 weeks before leaving for our road trip, the boys and I watched the premiere of the new Men Who Built America–Frontiersmen series. Episode 1 was about Daniel Boone leading the first group of permanent settlers through the Cumberland Gap into Kentucky. The settlement was called Fort Boonesborough, and it played an interesting role in the Revolutionary War. Since we were getting ready to leave for our trip, and Kentucky was already on our route, we Googled “Fort Boonesborough.”

Turns out there’s a state park (with camping!) at the original site and it was just a little over an hour from where we planned to stop in Louisville! It was not hard to adjust our “UnPlanned” plans. {smile} 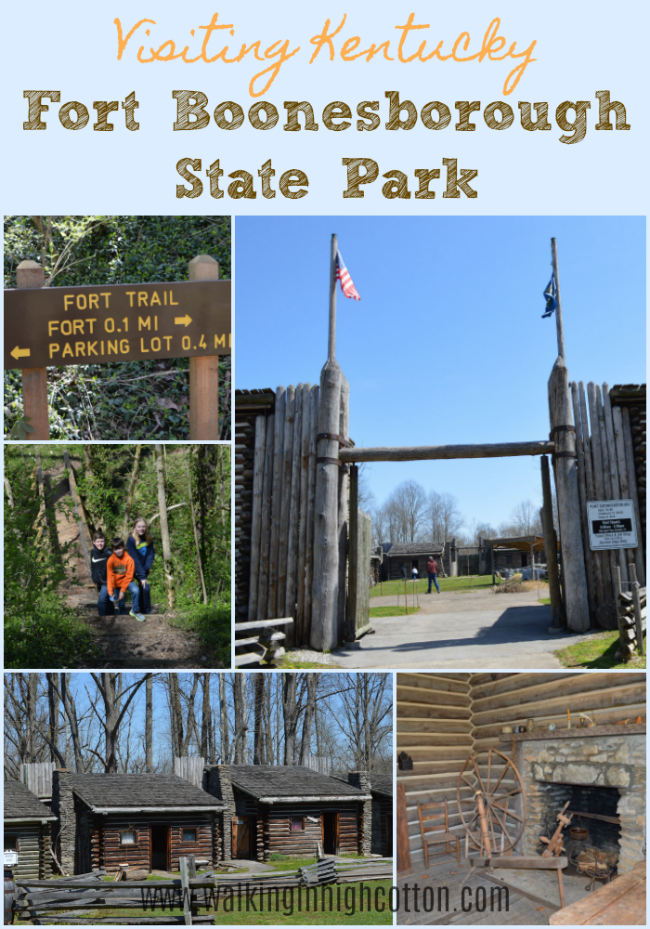 Fort Boonesborough was originally built right on the banks of the Kentucky River. Fort Boonesborough State Park encompasses the original site (which continues to be protected as an archeological site), as well as over 100 acres surrounding the site along the river. They’ve added a public campground with recreational amenities, as well as a full living-history replica of the original Fort on higher ground just a short hike away.

Living in Tidewater, Virginia, we’re no strangers to American history sites–whether original, interpretations or re-creations. I have to say, I was impressed. I’m glad we decided to throw it in our plan at the last minute.

Admission was $8/adults and $5/kids. I think it was worth it. They have basically re-built the Fort, including the 26 cabins, the 4 blockhouses, the stockade, blacksmith’s shop, gardens, well, and gunpowder magazine. Every building is filled with primitive and frontier-period tools, crafts, and materials. 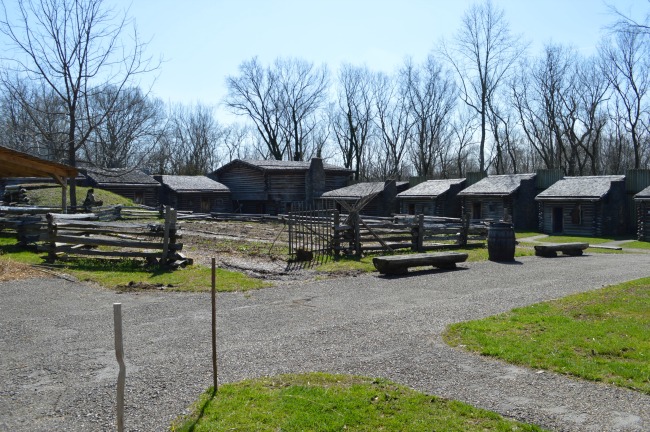 One series of cabins are set up like a timeline of settlement improvements.

The first was what a cabin would have been like the first year…(bed on the floor, bare dirt floors, no hearth and mantel, etc)

Next was a cabin with improvements after a few years…(bed stand, woven blankets, rock hearth for cooking, etc) 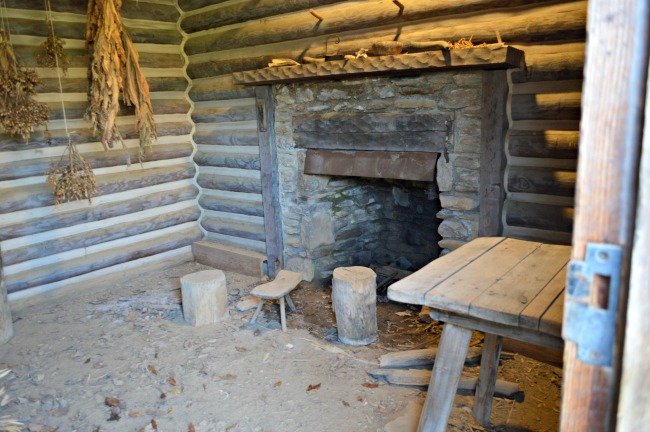 Then what changes you would have seen as more women reached the new settlement…(curtains, improved mattresses, more furniture and cooking utensils, etc) 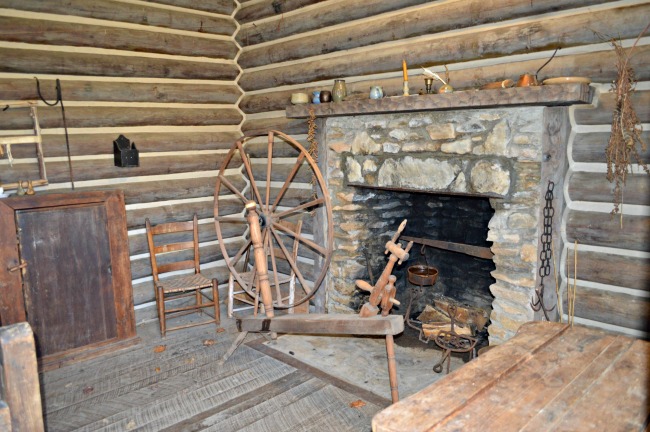 And then what changes you would have seen when trade with nearby settlements started…We found ourselves going back and forth to try and spot the differences over time–then especially seeing the final one and going back to the beginning.

Other cabins were set up as crafting specialties with volunteers to provide demonstrations. There was wood-working, candle-making, wool and fiber spinning and weaving, medicine and herbs, cooking, blacksmithing, gunsmithing, and other metalworking. 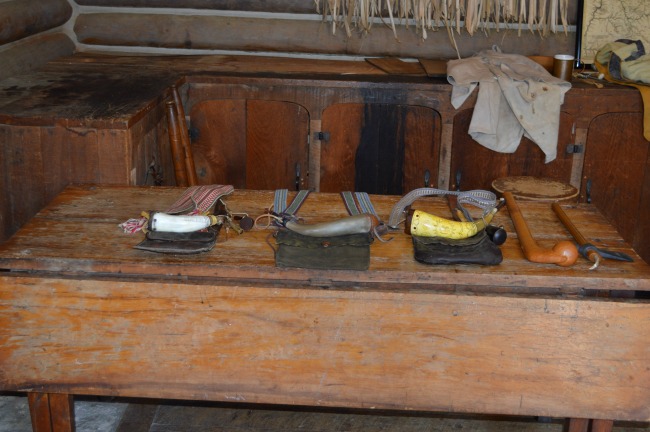 We saw someone making candles and someone dying cloth with herbs and making soap while we were there. The gentleman at the gunsmith cabin actually handmade the power horns in the picture, and was carving another one while we talked to him. 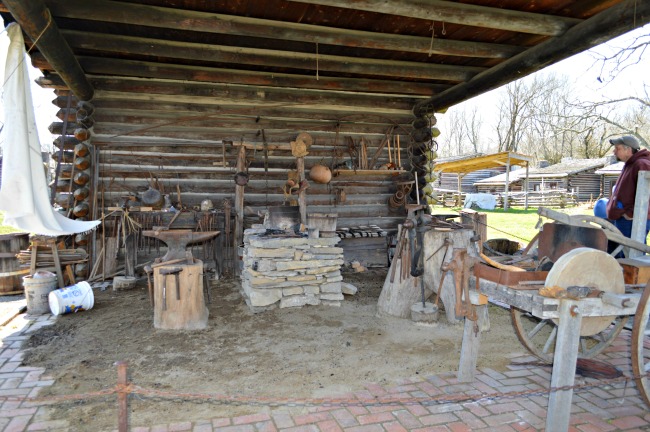 All the volunteers on site were in period costumes. While not quite as elaborate and authentically detailed as you’ll find in Colonial Williamsburg, they are certainly enough to get the information across. Most of the workers we talked to were very knowledgeable about their particular area of interest.  Several had a hands-on passion for their subject and told us they had made some of the implements and decor in their cabins. Both Mr. Fix-It and I were able to dive in with them on discussions about candle-making, fiber blends, natural dyes, and woodworking and gunsmithing.

The Frank T. Barnes Iron Collection was also on display. Mr. Fix-It and the Cowboy really enjoyed the museum section they had set up to display it. 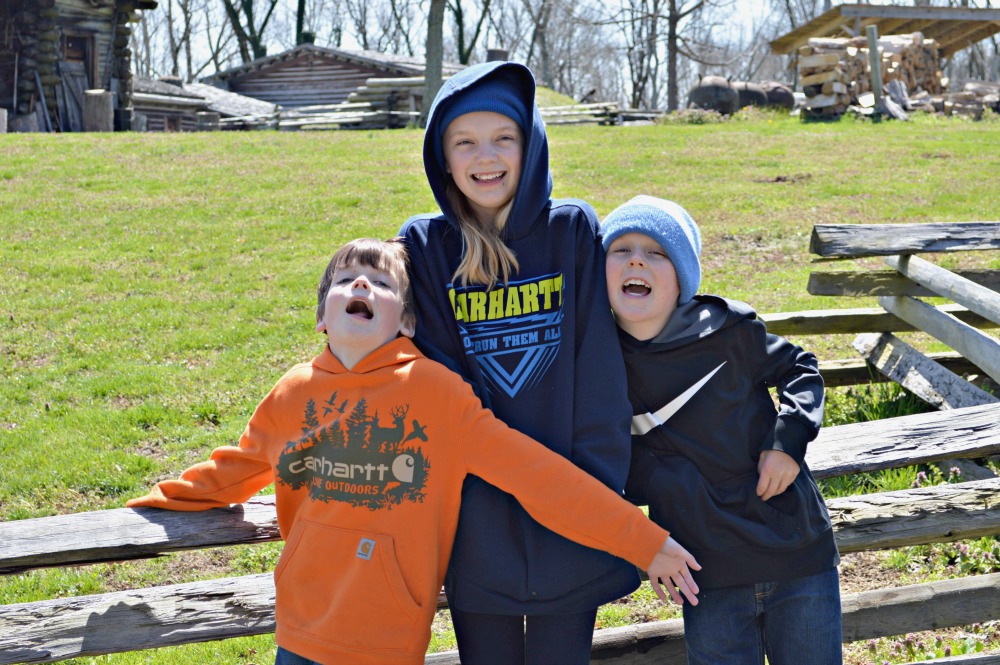 By the way, if you’ve got busy, energetic kiddos, this is a great stop. Lots of fresh air, room to move, and textures for fidgeters. There’s no paint on the walls to smudge or rare China to break! {smile} And, while it doesn’t feel crowded, it’s still small enough and contained/controlled (remember, it’s a fort–one way in and out!) that they can run a little wild (a little!) without too much trouble.

There’s a pleasant, shady walking trail from the re-created Fort to the original fort site by the river. It’s downhill to get there, but up-hill to get back. There’s parking at both sites, so you can just drive around if you don’t want to walk. We needed to walk to burn off some energy. {smile}

This road trip was my first experience at a public campground as an adult. Over our 10 days, we stayed in 3 different campgrounds, in 3 different states, run by both state and national park service. As backpackers, I think our view of the campground is probably a little different than a regular camper/RV user. Our kiddos were astonished (and a little confused) by everyone having their own electricity and water spigot at each site. {grin}

In my limited experience, this was a nice site. They had a decent camp store, a nice playground in the center, and plenty of pavilions and open space on the far side. There’s also putt-putt, a swimming pool, and plenty of access to the river for water activities if you’re there longer.

The sites themselves were laid out comfortably except a few that were a little steep for tent camping. (Just FYI…we were the only tent in sight!) Our site was right on the river, which the kids loved. 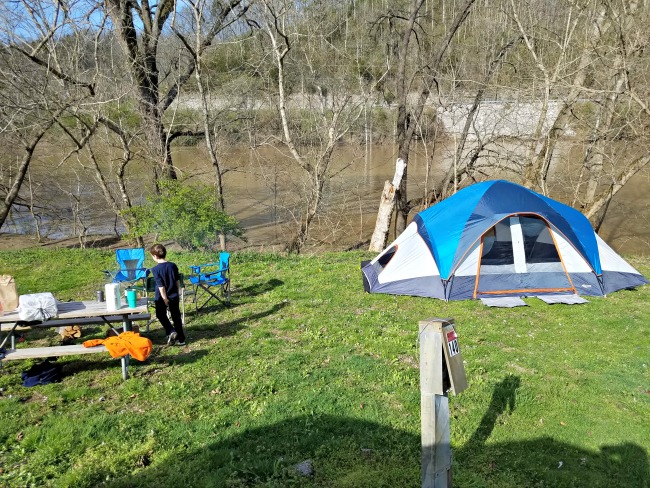 Another thing I’ll mention that the Ladybug brought up to me–the place felt safe and comfortable. There were kids running around playing together, bike riding and throwing footballs. People smiled and said hello to each other. It felt kinda small and…homey? Everyone in the family said they would be glad to go back again and stay longer. 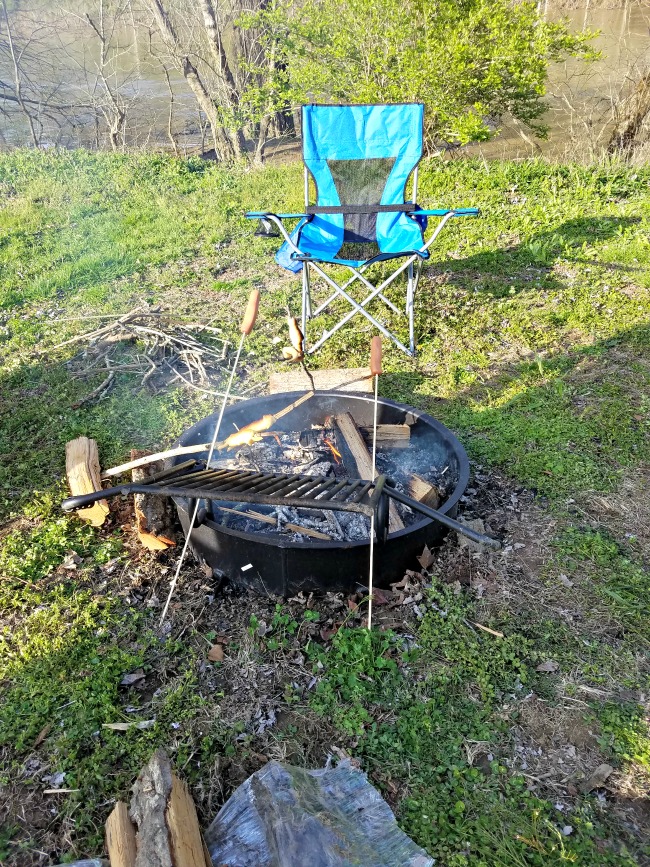 First, the bathrooms, showers, and laundry buildings were closed for renovations and they were using mobile units. Not fun. I wouldn’t let that stop me from going back–as long as they were done.

Second, the weather was…challenging…when we were there. They had several days of rain before we got there and it’s a low area so everything was still a little soggy and muddy. The kids weren’t allowed to play by the river as much because we wouldn’t be doing laundry or showers if they got too dirty. Then we happened to arrive with a cold front. It was 28 degrees when we crawled out of our tent in the dark the next morning. Brrr…….

The whole place is kinda low. It’s best to plan a visit while it’s dry! 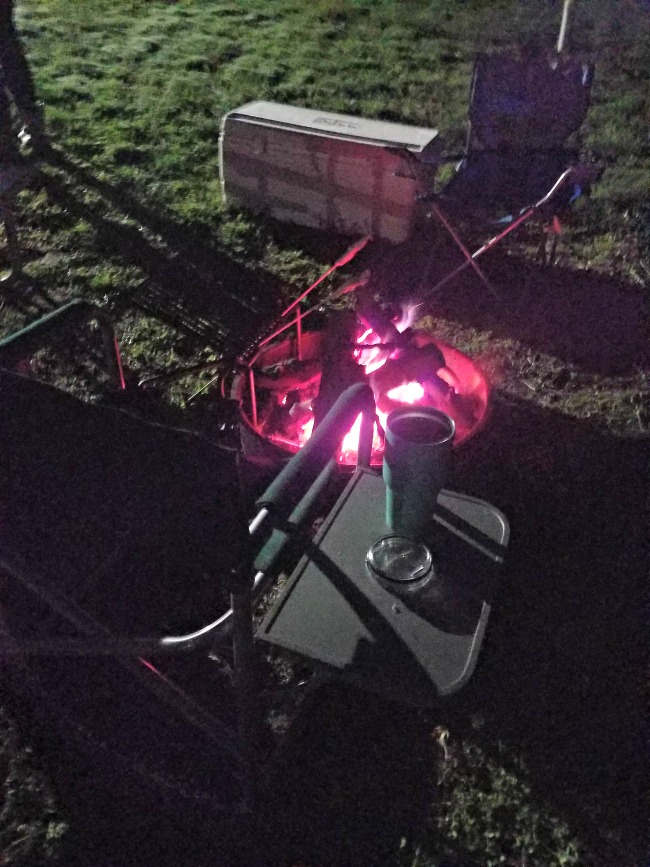 All in all, we’d totally go back again. And it seems like it would be a fun place to camp with extended family. Room for picnics and shared meals, plenty of activities on site, good amenities for an extended visit–and a Wal-Mart just 8 miles down the road. {smile}

I also recommend reading Daniel Boone: Young Hunter from the Young American series and Daniel Boone from the History Makers Bio series for easy background across multiple ages. We have both and they are easier reads with a lot of graphics for reluctant or challenged readers.

Do you have a favorite living history site to visit?