If you’ve been following us on Facebook, you’ve probably seen some of our Shark Week activities. We’re doing a summer unit study on Marine Biology (along with our unit on Archaeology) and Discovery Shark Week has been a great fit for some hands-on family fun learning! We’ve had some ocean-themed food, some shark games, and our big group project of building a paper mache shark! 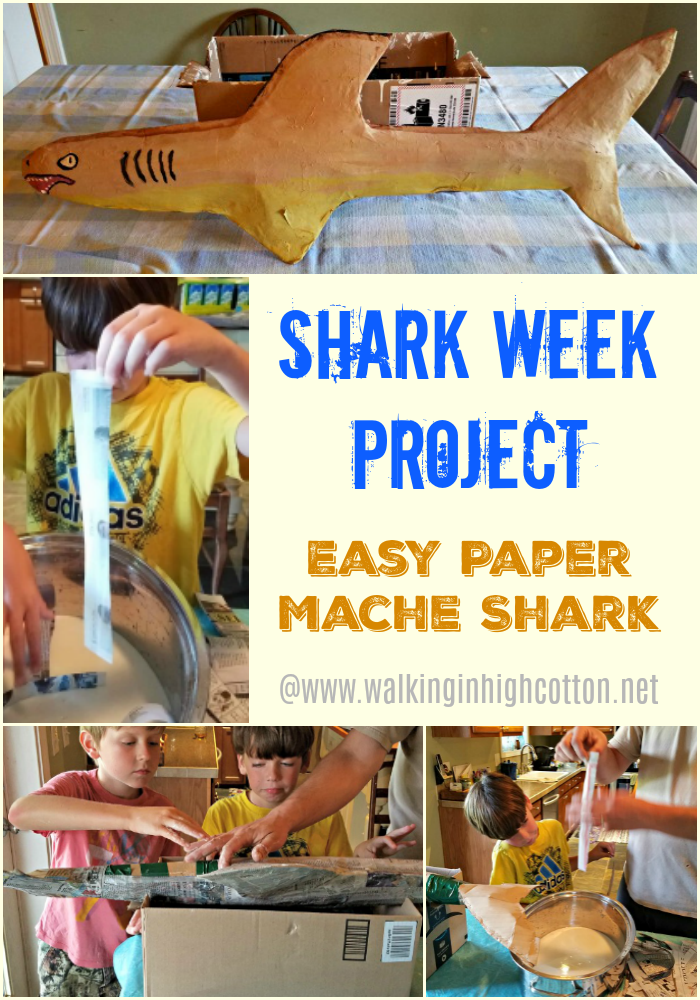 This is a very simple project with no special supplies needed. We had everything on hand already. I’ve shared it here in a lot of little steps because that’s how we tackled it over a 2 week period, with just an hour or so each evening together. Older kids could probably do this one all by themselves, although we enjoyed doing it together. It’s summarized at the bottom of the post if you just want the supply list. {smile} 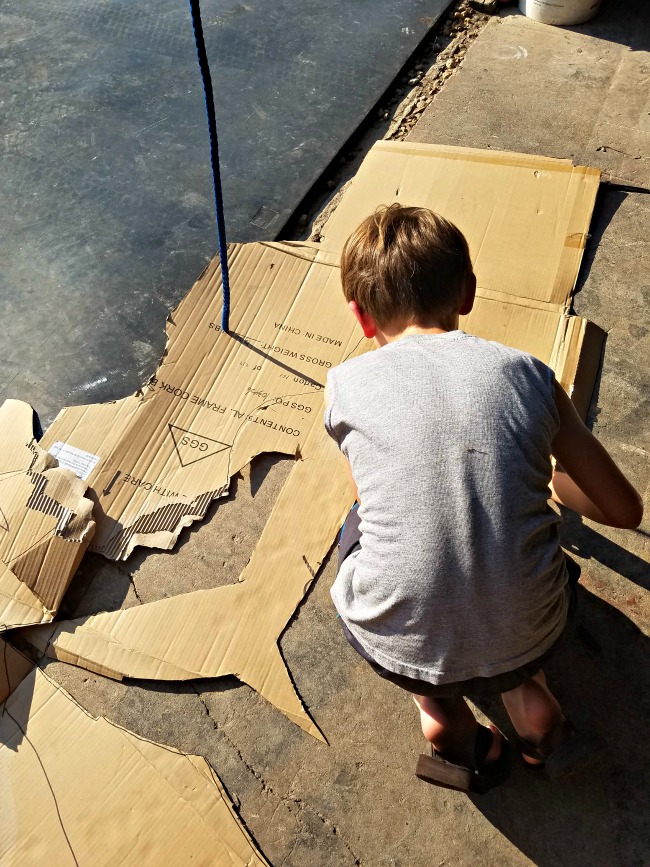 The good thing about this project is that it was multi-step, so it broke into natural chunks for us to work on together in the evenings after work and summer camp. The steps were small and easy, but each one gave everyone a chance to participate.

And it honestly wasn’t that mess either. This is probably partly because my kiddos have grown up a lot and are just generally less messy these days than years gone by. But also, we use inexpensive plastic table clothes with flannel backing as “craft table clothes” and don’t have to worry about messes as much. I buy the big rectangular ones on clearance at the end of the summer for a few dollars and one tablecloth will last multiple projects. They work on the ground or the table, inside or outside. 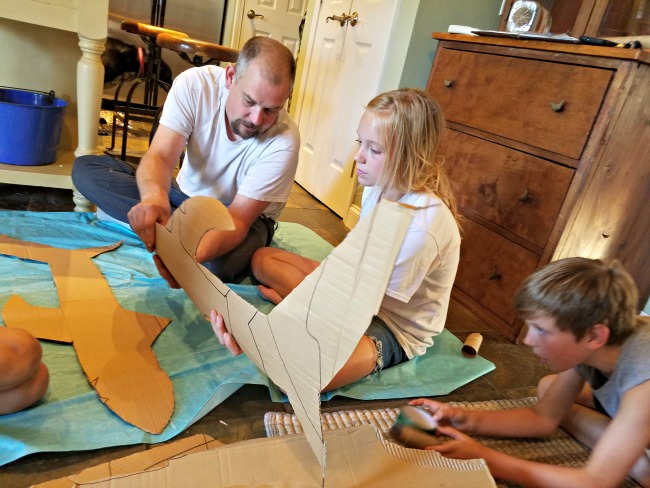 So how did we make our shark?

The kiddos did this free-hand based on a couple pictures they found on Google images. I think it’s really important for them to be hands-on with these projects even if it ends up “not perfect.” The experience is wonderful! A wider body will be easier to work with. Our shark was very narrow, which created some challenges when we stuffed him (see Step 4), but live and learn.

We did this by hand, just gently rolling the outlines up and down to create some flexibility in the cardboard. The tail and fins were the most difficult work because they are definitely prone to ripping.

Step 3: Staple Half the Shark Together

Line up the two outlines. Pick either the top half or the bottom half, but basically use a stapler to “sew” the shark outlines together. Only staple half the shark–so you can stuff him!

Step 4: Stuff the Shark with Balled up Paper

We used old magazine pages. Any paper would do, but the newspaper is a little flimsy for this step, so you would need more than if you use thicker paper. How much you stuff is up to you. I thought they were putting too much in, but as long as it will close, it doesn’t really matter. 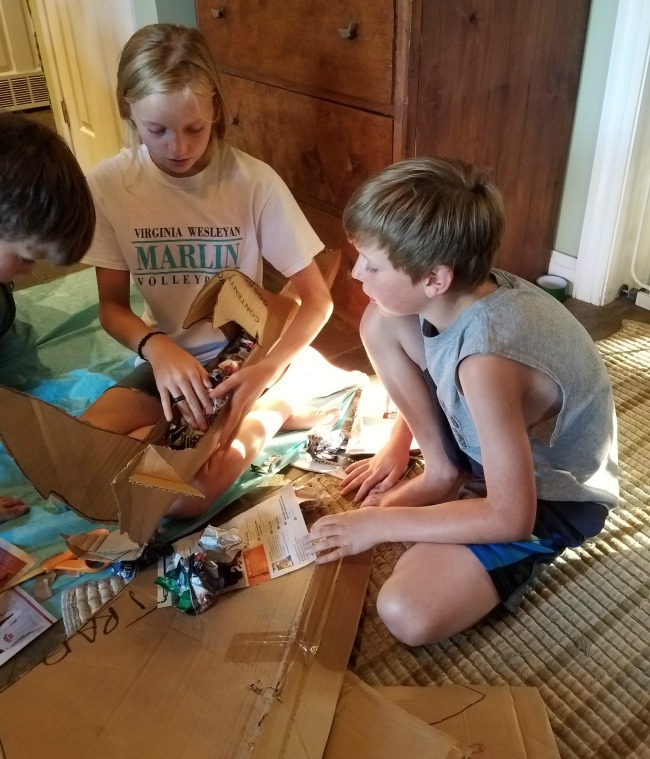 Step 5: Close up the Shark

We stapled him closed as we went along. Depending on how thick your cardboard is, and how much stuffing you used, this can be pretty challenging. Our regular desk stapler was at the very edge of its ability. A heavy duty stapler (like this one) would work better, but you need to have the staple mouth at the end of the machine so you can reach the edges without crushing your project. (This one wouldn’t work well.)

We also used a couple wraps of craft duct tape to cover the high-stress sections. 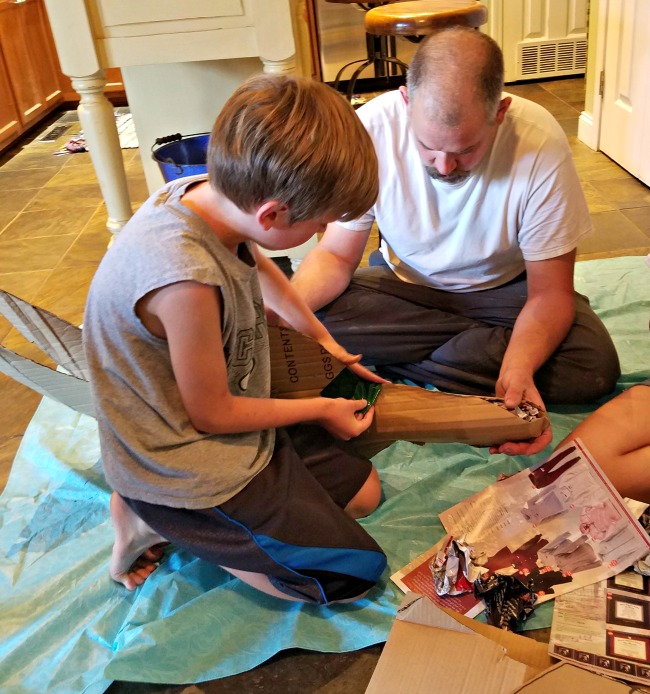 We used flour, water, and newspaper for our paper mache. That’s it. No glue or other sticky messiness. We cut our newspaper into strips about 2 inches by 12 inches. For the tail and fins, we used some half strips that were 2 inches by 6 inches. We did 2 layers of paper mache. The first layer was thicker, the second layer a little thinner and smoother. 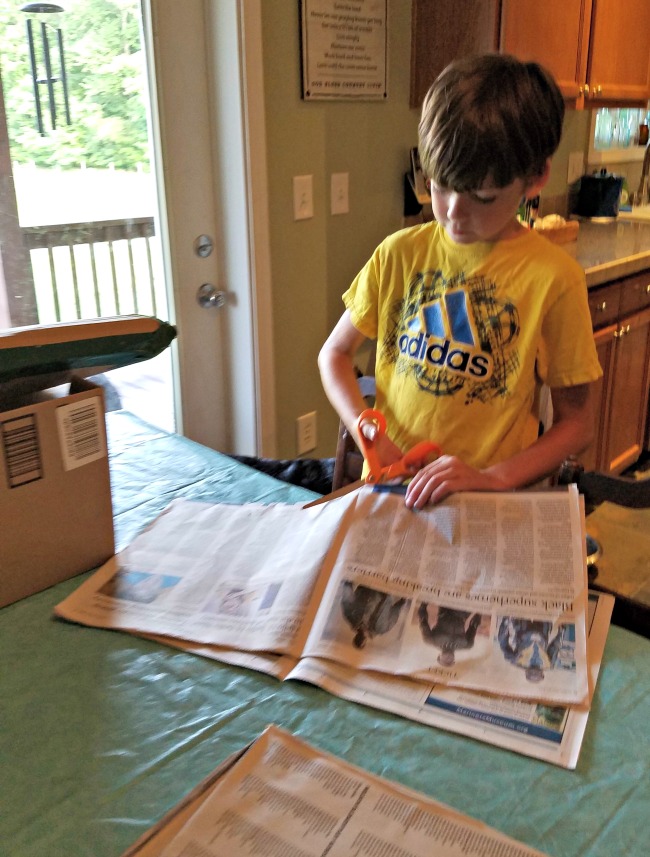 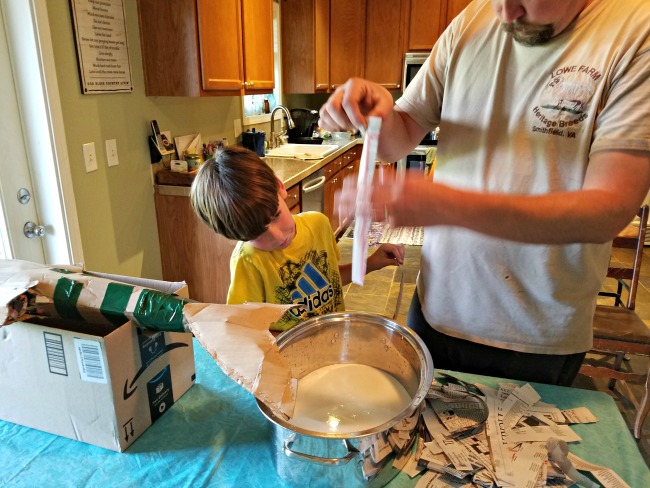 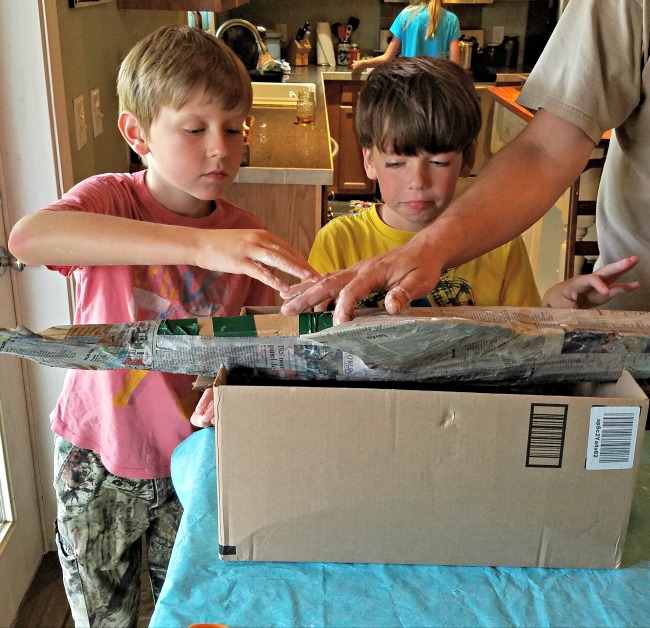 The Cowboy was the only one that had done paper mache before, in art class at school. It was new to the Ladybug and Speedracer. I made sure they each did at least a few pieces, but it was not their favorite part. If you have a child with sensory issues, this might be challenging. 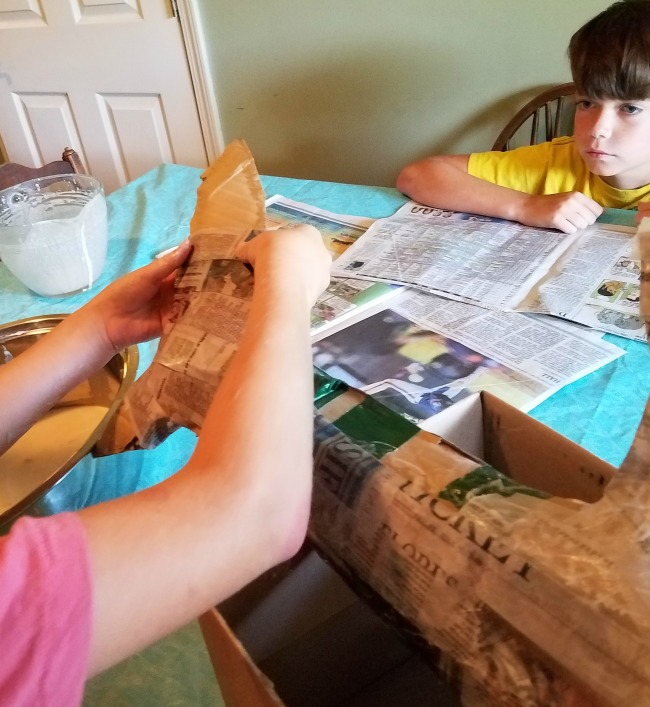 But the good news is that there’s plenty of other steps they can participate in more!

We used an old Amazon box, notched on either end, as a stand for our project. Leaving him in the dining room overnight under the ceiling fan really helped the drying process along. 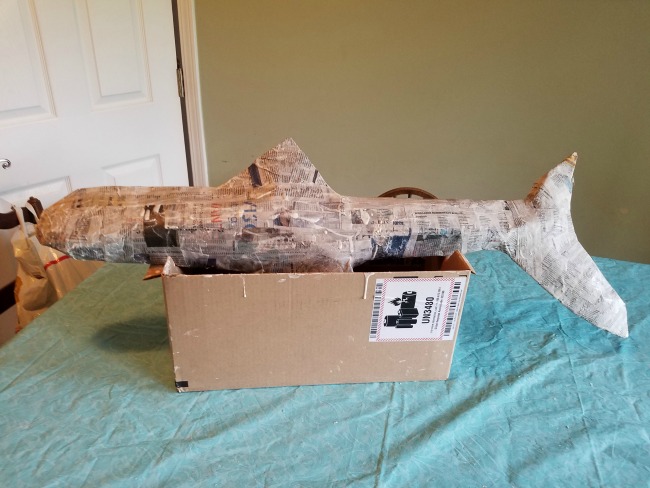 We also did some sanding and shaping between paper mache layers. That’s one reason to make your first layer thicker than the second layer. It gives you a base to work on for detailed shaping later. 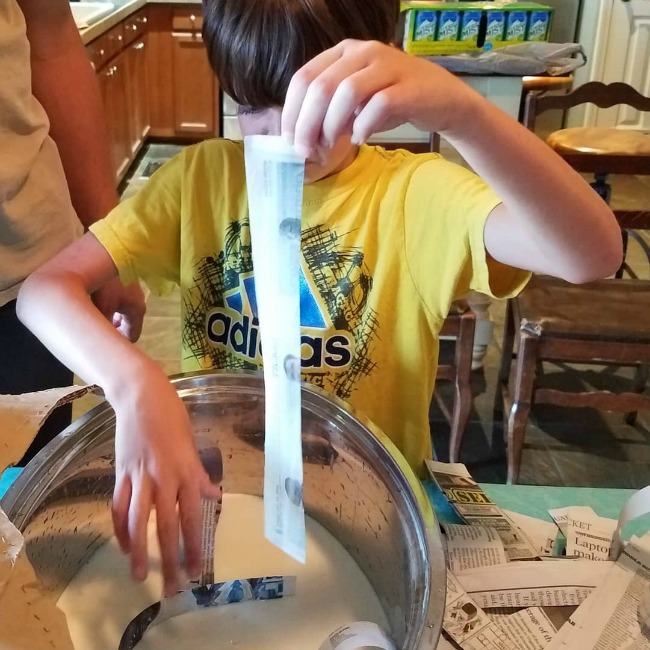 We used an all-over base coat of tan spray paint when the final paper mache was dry. (BTW, I love this Krylon spray paint. It comes in tons of colors and coats everything I’ve painted very smoothly. Let’s just say, I’m not the best painter in the world and it’s very forgiving.) 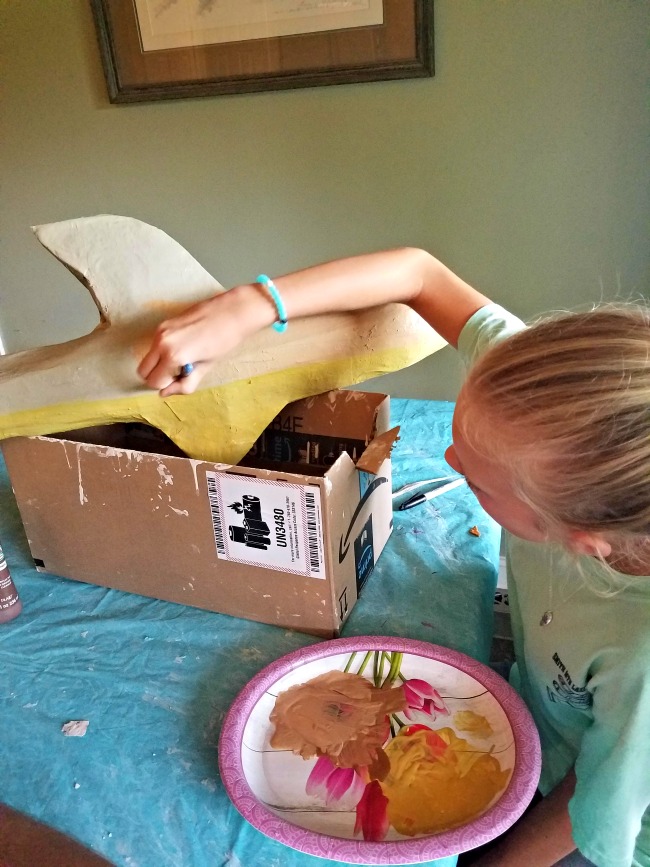 Then we just used regular acrylic craft paint to start adding the final colors. (We used this Apple Barrel paint for all our projects, from sharks to pine cars and sailboats.) I keep packs of assorted craft brushes with our paints so they can work big or small details. 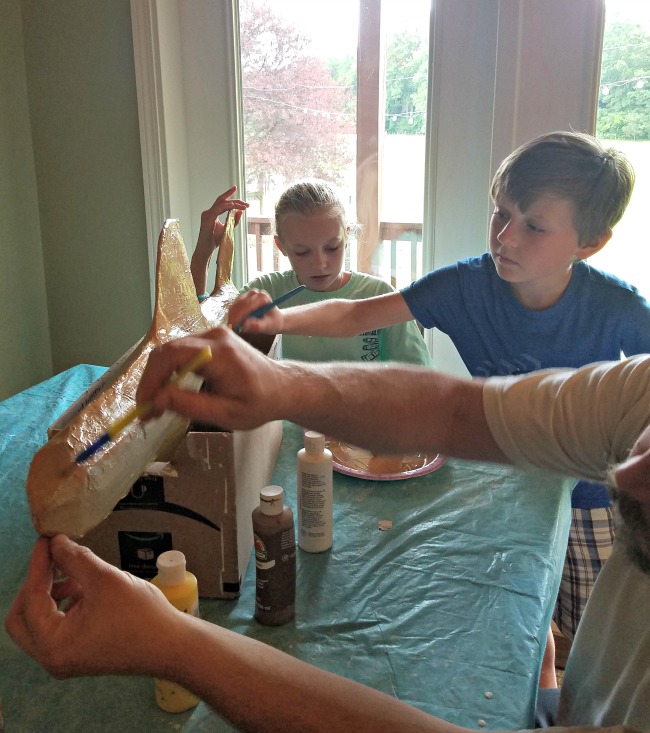 At the last minute, they decided they wanted to go with an open mouth because a shark without teeth is no fun. Mr. Fix-It helped add that part. 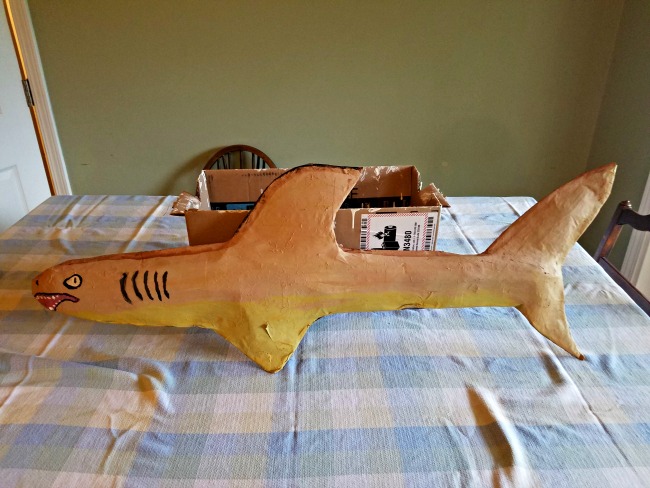 The best part about this whole project was that there was plenty for everyone to do together. Every step could involve the whole family. And even when they didn’t want to paper mache (or Speedracer didn’t want to paint) there were other activities right there in the kitchen that helped. Like helping make dinner while a group worked on the shark. Or mixing the paper mache while everyone else put it on. Or cleaning the paint brushes.

And if you’ve got a little one that doesn’t like to get messy, here’s a perfect Shark Week lego set instead!

Here’s a quick, printable summary sheet of the project… 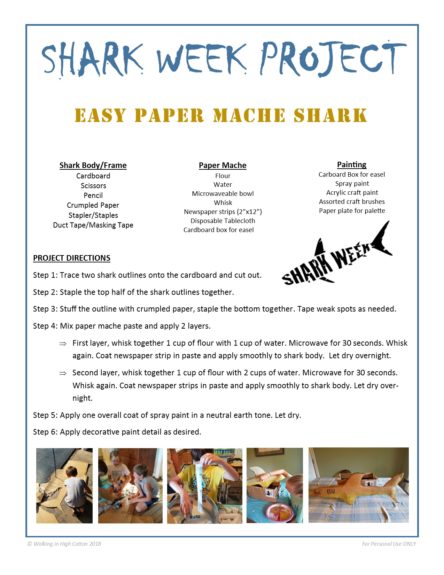 Do you watch Shark Week? We’ve had a blast this year watching it together every evening–and we’ve all learned a lot too! If you’re looking for some other fun, easy shark and marine biology ideas, pop over to our Pinterest Marine Science board (’cause you know I only do e-a-s-y!) {smile}