So the kids and I decided to do up the chores the other day while Mr. Fix-It was working late.  Ours and his.  I figured we had the brains and the “mus-skulls” to handle it if we worked together.  And they have to be under constant supervision.  And working their “mus-skulls” makes them tired so maybe the Cowboy will stop waking me up at 5:30 am on our “stay-home days” as we like to call the weekends around here.

So…we all piled into the Ranger… 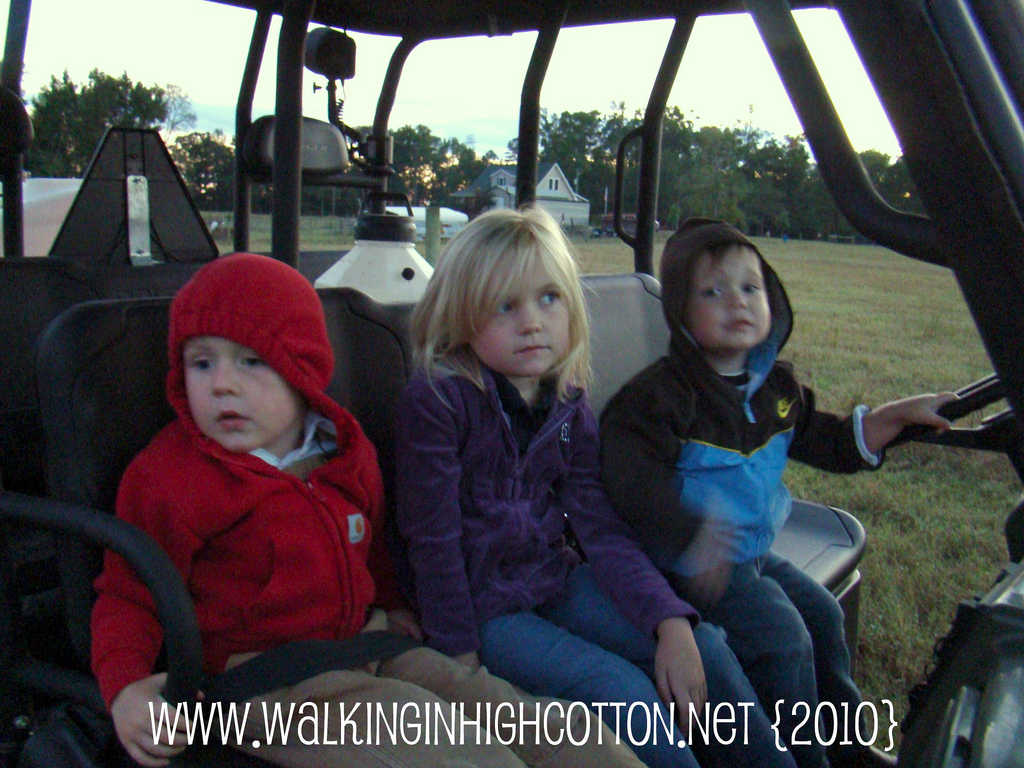 The Ladybug does not find all these chores exciting after school…

…And took off to move the chickens.  Now there’s a lot of chickens around here, so here’s a quick refresher–meat chickens are called “broilers” and egg chickens are called “layers.”  We usually feed and water the layers and clean the hen house.  And we usually feed the broilers and fill the empty waterer.  But it’s big (7 gallons) so Mr. Fix-It carries it back full, moves the field pen, and lifts the waterer waaaaay up over the pen wall to put it back.

He moves the field pen by grabbing that bright blue tie strap and pulling it onto fresh grass each evening. 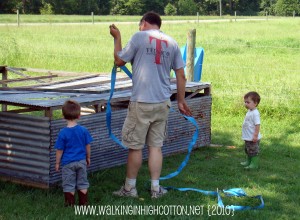 He just hooks that tie strap up and off he goes…

Pulling it by hand. 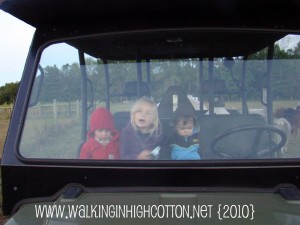 So we decided to help out.  We piled in the Ranger, took the scenic route around the field to see if there were any turkeys around, and pulled up to the back of the field pen.  We even took the dog for back up.  The boys and I just piled right out and grabbed onto the blue line.  The Ladybug looked at us like we’d lost our minds and said,  “I thought we were moving the chickens?”

Now she’s been known to be kinda prissy about farm work before, so I just sort of ignored her attitude and told her to grab on.

I mean nothing, folks.

That pen didn’t even so much as wiggle.

Now I know that Mr. Fix-It has himself quite the “mus-skulls”, and I was working with Jack and Jill and Spot and the Pillsbury Doughboy (and I’m not exactly Wonder Woman)–but it didn’t even budge.  It didn’t even creak like it was thinking about budging and couldn’t quite do it.  We pulled until my head was hurting from pulling and my face was (according to the Ladybug) all yucky red.

As I collapsed gasping and heaving and fanning myself with the blue strap the Ladybug looked at me while picking her precious little fingernails and said “Uhm, I thought that’s why we brought the Ranger.” 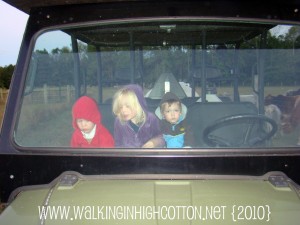 They’re quite the crew…

Out of the mouth of babes…

It never even occurred to me.  Of course, there’s probably plenty of reasons why.  Chiefly, that I might break something and that’s the kind of thing that comes up in marriages 20 years down the road while arguing over the Christmas card list.  I can hear it now “Well, I might have forgotten Aunt Sally’s address, but at least I didn’t rip the front axle out of the Ranger trying to move the chicken pen!” 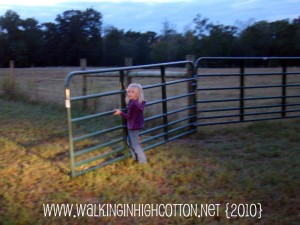 I actually use her mus-skulls and brains quite a bit around here now that she’s tall enough to reach stuff.

But I wasn’t raised to take defeat well.  And I certainly didn’t want to teach my kids to give up.  And really, if Mr. Fix-It can move it with just his arms, surely the Ranger’s not going to fly to pieces…right?

Surely the extended warranty will cover that, right? 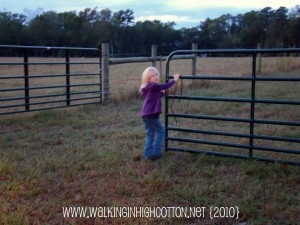 She doesn’t think she needs my directions any more either.

The Ladybug was on chicken leg monitoring duty and the boys were strapped tightly in their seats–it went smooth as silk, folks.  Smooth as silk.  We moved slooooow and the Ladybug shooed everyone along on the inside and hollered if anyone got caught under the edge so I could come “save” them.  5.3 minutes later we had all our chores and all Mr. Fix-It’s regular chores done and we got to go check on the sheep.  The Ladybug even got to take some pictures by herself, since the camera managed to survive the trip. 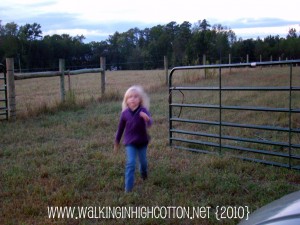 Farming is empowering for girls, look at that march!