I mentioned last week that I’ve been busy at my sewing machine. Remember this cute little cell phone pocket? 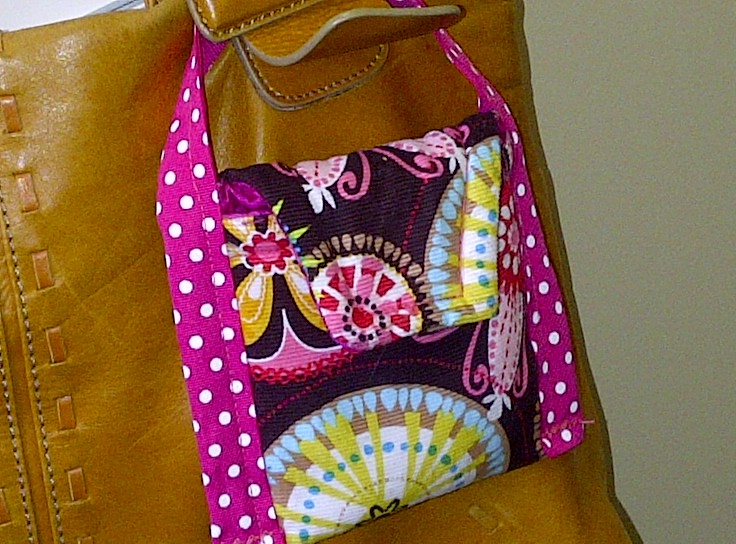 Well, I also made myself a matching laptop sleeve. Partly because I could use one and partly because I just love the material! The colors are much truer in these pictures than the cell phone pictures from last week. 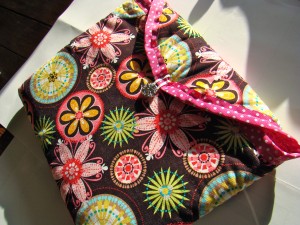 The fabric is call "carnival bloom" by Michael Miller.

It was pretty easy, although I have some technique to work on still. My Aunt Annie helped me with the “pattern.” We just measured by laying the laptop on the material and wrapping it around the computer like an envelope. We included a little area on the sides and length to account for batting and seam allowances, and then cut it. Just a rectangle.

Then we folded it up and pinned it to measure the sleeve flap and trimmed the flap edges for that great envelope look. That was it, no real pattern at all. 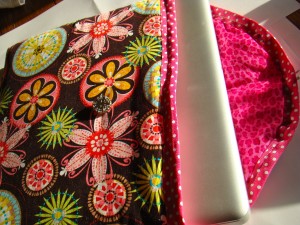 It's custom sized for our MacBook, so it fits just perfect, nice and snug.

I lined it with more of that fun pink cheetah material and used the same pink polka-dot ribbon scrap for the seam edging. I cut the edging into two separate pieces because I was a little unsure about sewing around the corner at the fold line, but I would just use one big piece and more pins next time. With the needle-down function on Bessie, turns and corners aren’t really that hard. 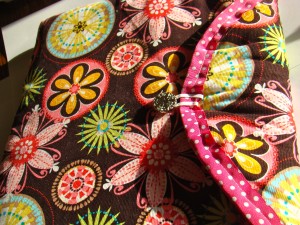 I would do the elastic a little differently next time.

The elastic closure was a bit of an experiment. It worked, in theory, but I would probably run it from the bottom of the sleeve flap next time. Making sure it got “caught” in the seam was a little tricky but I think I could do better next time. My Aunt also suggested just using velcro. That would have worked, but I just loved the button detail. It was part of my “vision” all along. 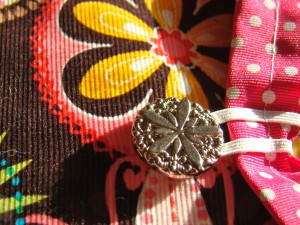 One of my miscellaneous treastures. See--it matches the flower pattern on the material!

That picture also shows a bit of the corduroy texture in the material. Just beautiful!

Overall the project was much easier than I would have thought 6 months ago. We used 6 oz cotton batting for padding so it’s very thick and protective around the computer. It took about an hour, but Annie says that’s because I’m a little slow. It’s probably a half hour project from start to finish. And next time I’ll actually take pictures of the process!

So what have you been up to?

This week I’m linking up over at Someday Crafts for Whatever Goes Wednesday and Sew Cute Tuesday over at Creative Itch.