We pretty much skipped breakfast on Sunday to get outside and see what Hurricane Irene had left us with. (Mr. Fix-It was a little stir-crazy and hopped in the truck as soon as it was light out.) By 8 am our chainsaw was running. 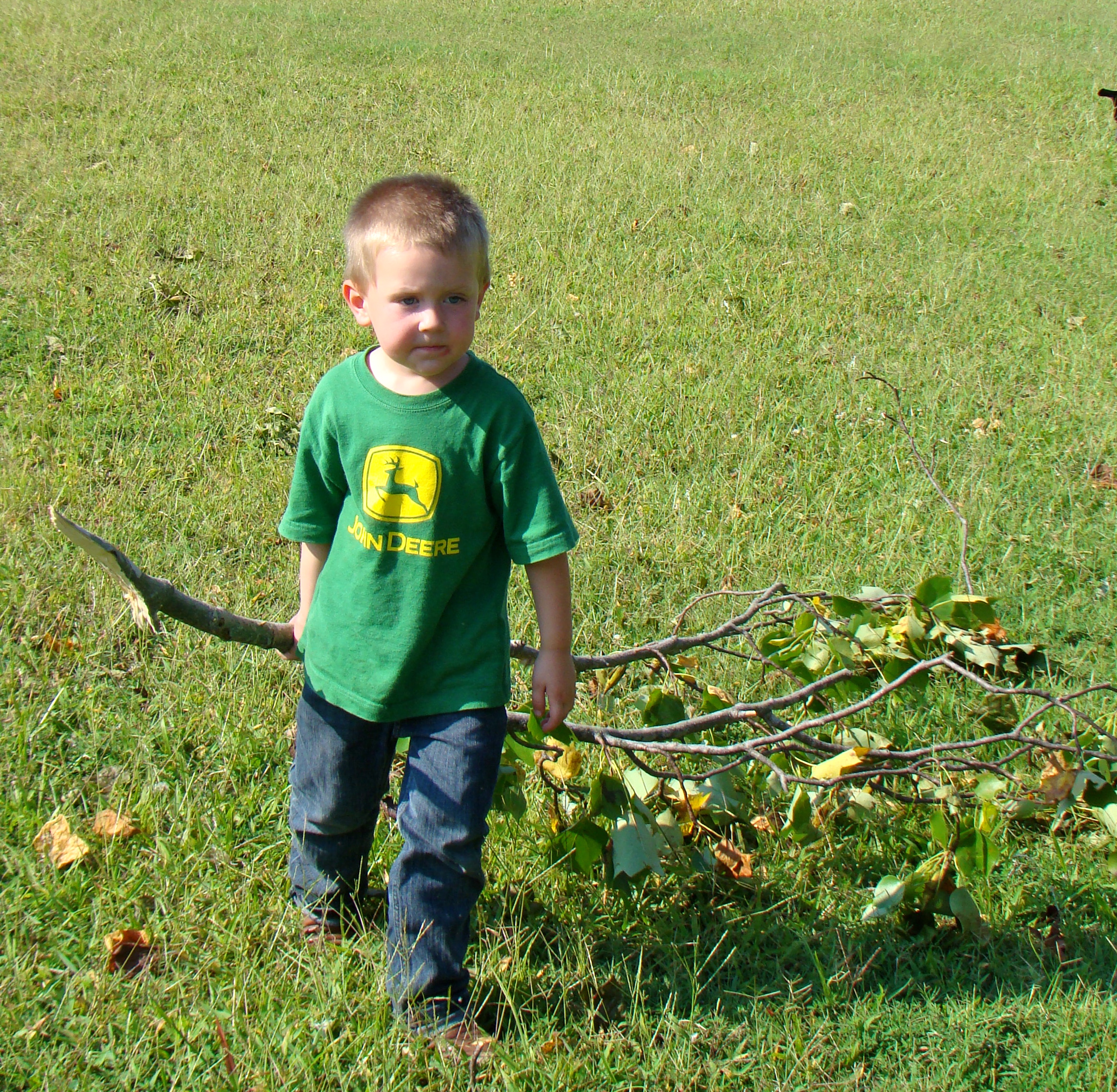 Mostly we had limbs down, but there was some solid wood to be cut for firewood.

The kids helped a lot. Most of the branches were just their size if they worked together and we had a log splitter running so even the bigger pieces ended up their size for stacking. Penny was helping too, although usually it was more by accident as she tried to play tug-of-war with everything being dragged around. 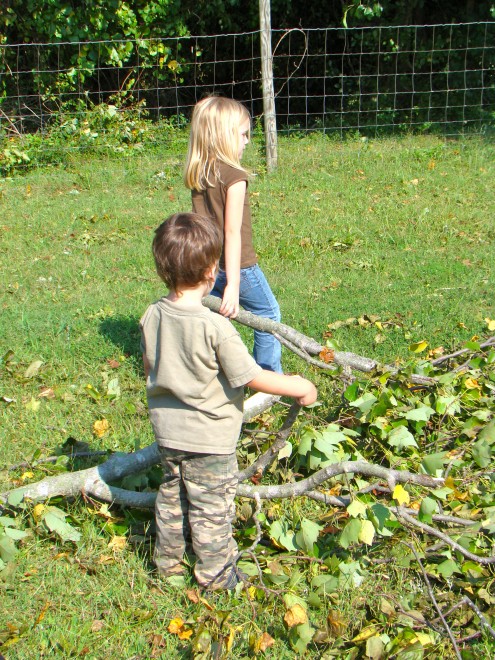 Even Speedracer worked--mostly stacking and carrying, not dragging. He get's tangled too easily.

We had a few unpleasant incidents. Penny knocked Speedracer flat in the mud, which upset him more than hurt him. He doesn’t like having dirt on his hands (I don’t know how he manages to have that kind of fetish around here!) so he started crying and ran over to wipe it all off on my pants. (Thankfully I don’t have the same issues with dirt!) 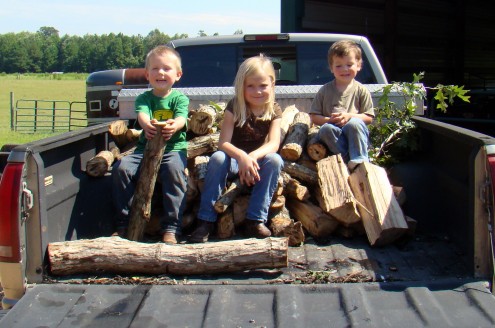 They were proud of helping clean up and helping provide heat for the winter.

Then I had a wood bee crawl up my pant leg. Thankfully I felt him crawling and squished him in the seam of my jeans before he stung me, but I was creeped out for a while anyway. Yuck! That also might have added to the Cowboy’s situation. Shortly thereafter, the Cowboy started screaming bloody murder by the truck, swatting at his ear and doing his little “I’m freaking out” dance, tears streaming down his dirty red face. There was a waspy-bee thing buzzing around his ear and on his shoulder.

We’re not really sure what it was because he was screaming and dancing and we were swatting and soothing and checking him for stings–which he had all over according to him, but we didn’t find anywhere–and the little bugger got away. I think. Penny might have eaten him, she was right in the thick of things too. 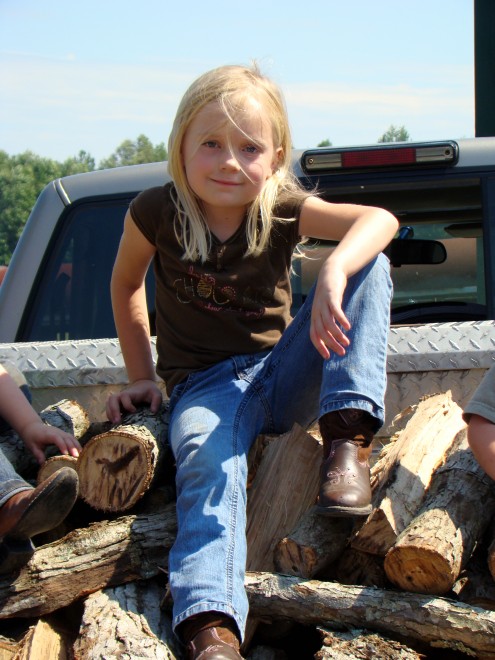 What did I do to deserve this grown-up girl of mine?

We finally got him calmed down and checked over with no sign of any actual injury. So he took his moment of pity to start asking for food and water–which is when it occurred to me that we sort of skipped breakfast. So we wrapped up with the tree we were working on and headed back around the field. We ate an early lunch and had a little “quiet” time before heading out again. 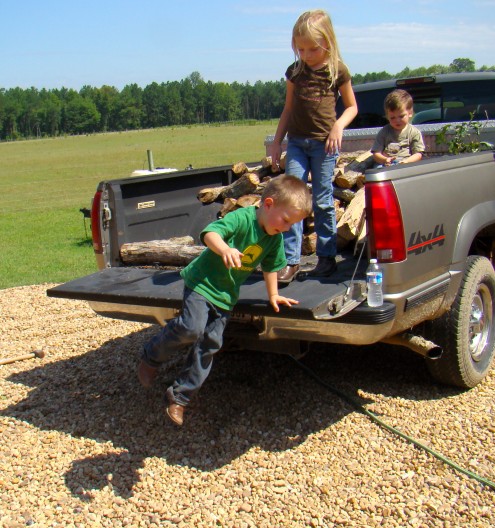 They grow so fast!

We checked in on our neighbors and family and ran Penny ragged learning to follow the Ranger around the farm. (She slept like a log!) Then we cleaned up some more branches and checked over all our fence lines and thanked God again that we didn’t have any serious damage and that we still had power! 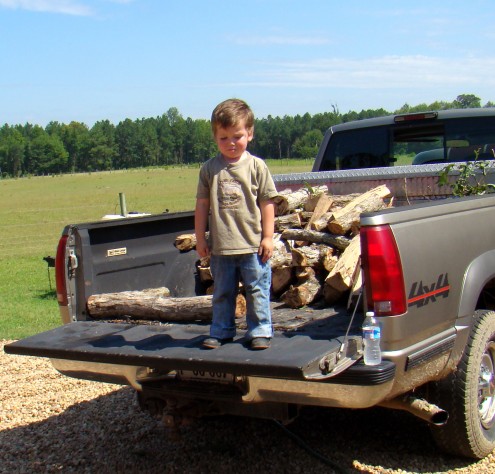 At least this one's probably going to need me for a little while longer.

And we all went to bed tired.

I can’t believe we’re already fully into the school year again, already heading toward Thanksgiving and Christmas! The weather since the storm has been lovely, cool and breezy and in the 65-80 degree range. This morning I needed a jacket!  It’s time to start thinking about the holidays, about how we’re going to celebrate this year, about crafty projects for our home and family, and about prepping the farm for the winter.

What’s on your mind lately?