The Ladybug got a rocket for her birthday last week. A rocket called “The Taser.”  (You didn’t know 7 year old girls wanted rockets for their birthdays, did ya?) 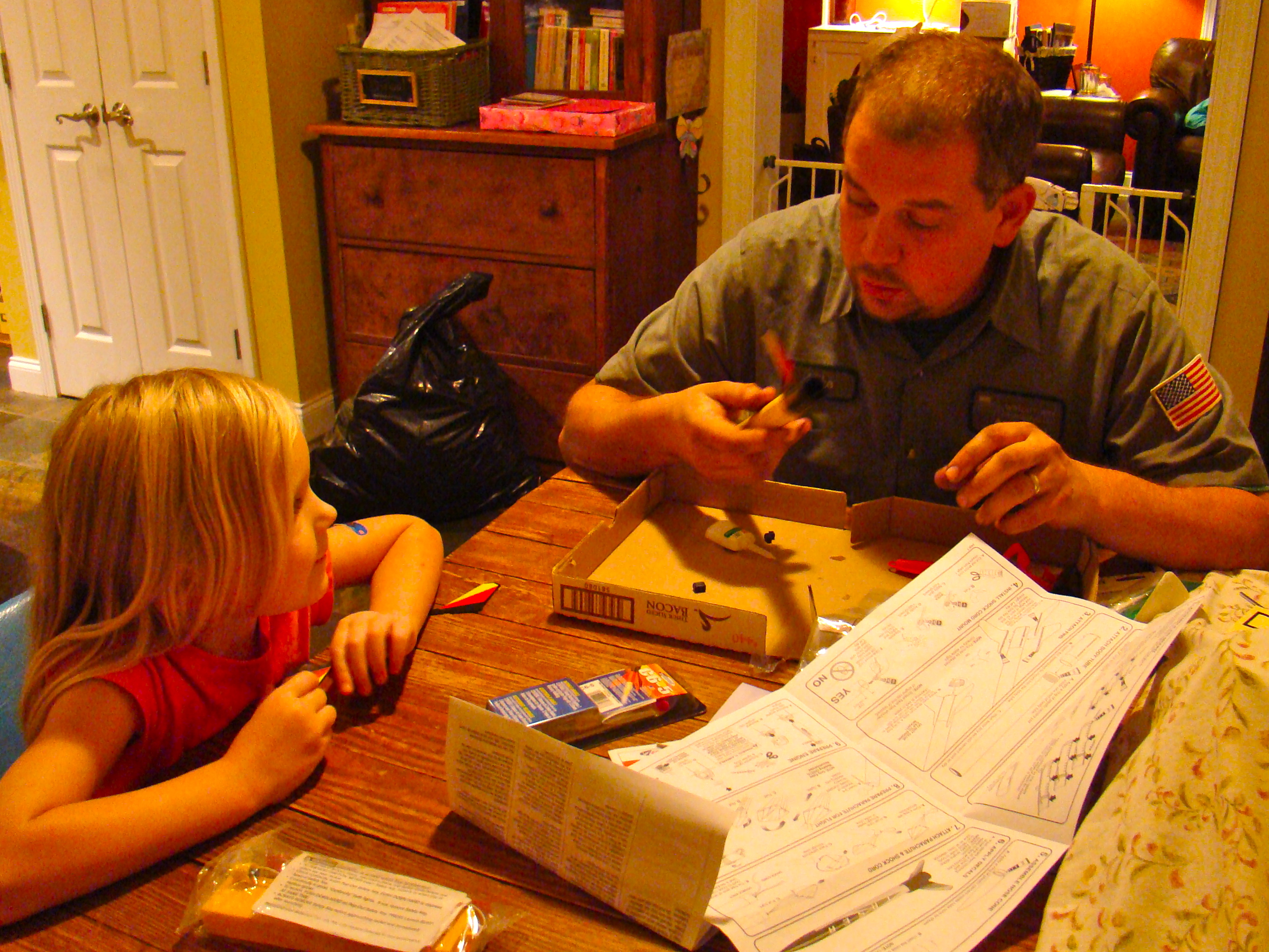 These are father-daughter bonding moments here.

She and Mr. Fix-It spent about a week putting it together in the evenings so they could shoot it off this past weekend while Mr. Fix-It’s sister was in town. They even watched YouTube videos together to see what it would look like (and what bigger ones are out there for next time!). She told me we might have to hid behind the truck when we set it off. 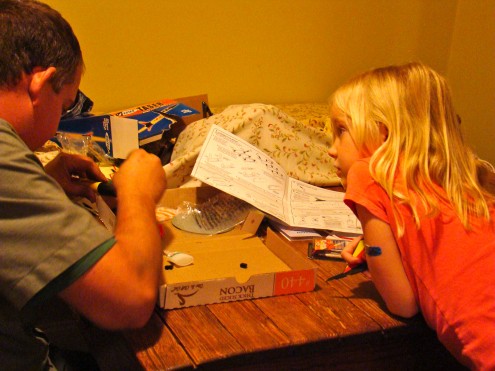 It's good reading practice you know--using the directions.

They kept raiding my crafting supplies for things like masking tape and glue. I was buzzing around doing other chores and projects, so I wasn’t following everything they were doing. The kids love running errands between Mr. Fix-It and I when they don’t have to explain what they want something for. They come to me and say “We need masking tape from your basket, Mom” and I get it for them, no questions ask, since I know they’re in the middle of something with Daddy.

Ahhh, the power. The authority. The freedom! 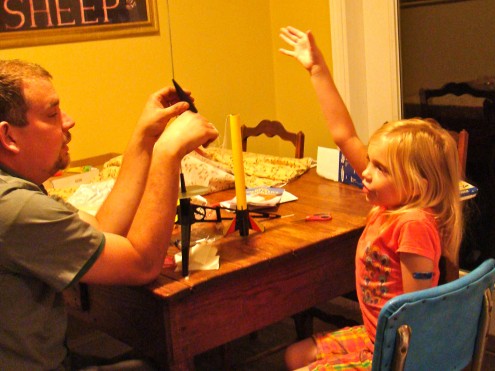 I think she's got the jist of what's supposed to happen.

Mr Fix-It, being the awesome Dad that he is, picked up smaller rockets for the boys on Saturday too. Just so everyone could join in the fun. Those took about 2 hours to put together, while Speedracer and I took a nap. 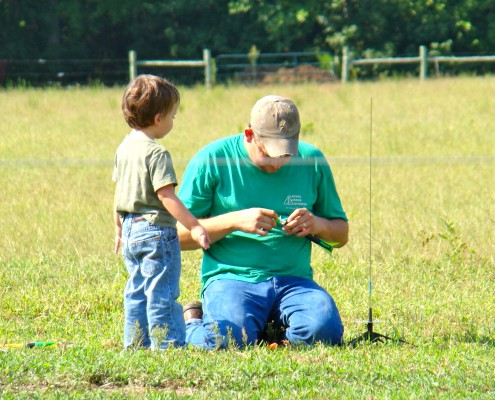 This is our first family foray into rocket launching.

The Ladybug was the official sticker-putter-onner, being the old pro rocket builder that she is now. And she kindly agreed to let the boys use her launch pad too. 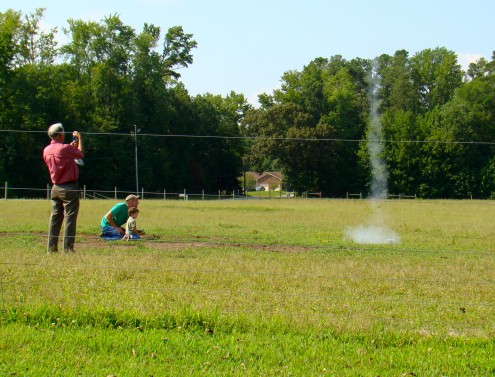 They shoot up in the air, then a parachute comes out and they float back down to the ground. There was a lot of talk about what color the parachutes were. 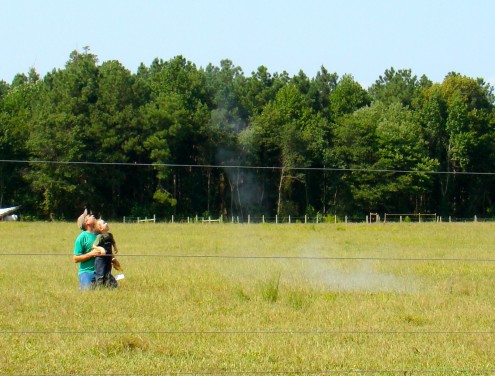 Then you can stuff the parachute back in the tube (ok, the rocket “body”), slap the tip back on there, and throw another engine/motor/firing-thing in there to set them off again. (Clearly this is not my area of expertise!) 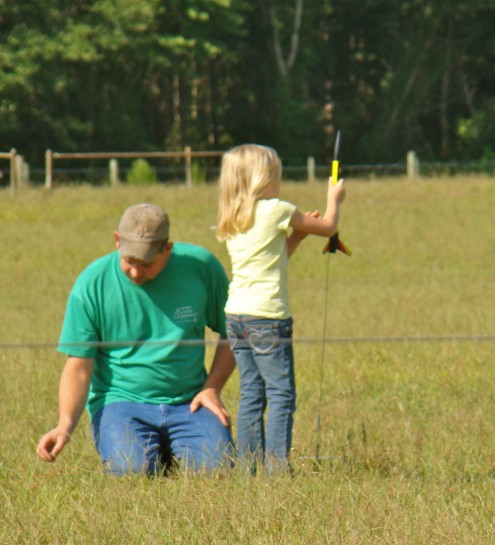 Look at the Ladybug, she even looks like a pro!

The boys all did ok. Speedracer’s left the field, but strayed out into the road and had to be recovered. The Cowboy’s actually went straight up and came pretty much straight down–talk about a quick recovery mission!

Then there was the birthday girl with her fancy-smancy Taser. 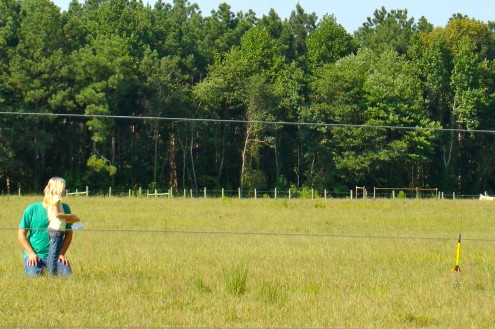 She got to do all her own launch procedures.

That little bugger when up so high we couldn’t see it for a while and came down across the road and down the driveway at the neighbor’s house. We thought it was a gonner for sure. Maybe stuck in a tree somewhere? Nobody could see it land. 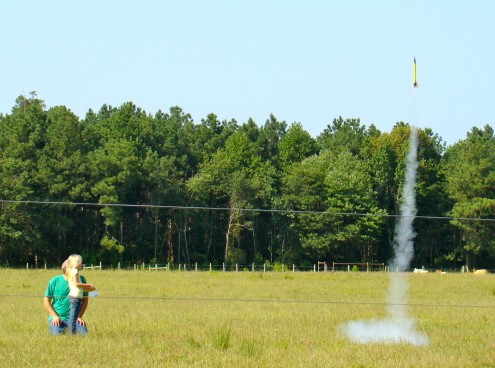 But it landed right on their front yard. So the Ladybug hauled it back safe and sound for next time. 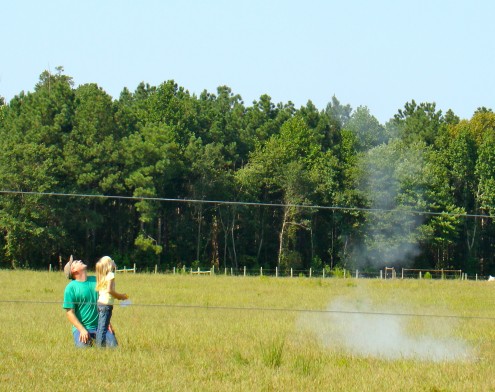 I love these pictures of everyone staring up at the sky!

Did you know those things were reusable? Oh yeah!